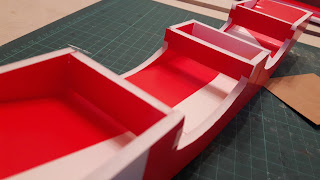 The title of this post says it all.  What had seemed perfectly reasonable on Friday soon spiralled into a hopeless quest.  And it's not that I normally set unrealistic deadlines.  Admittedly, what I had planned would take a full weekend, but that was fine within normal parameters.  However, reality got in the way.  I found myself out all day Saturday and all day Sunday.  I hadn't expected this to be so.  The result was that I had less than four hours all in for my hobby.  I had been expecting around four times as much. 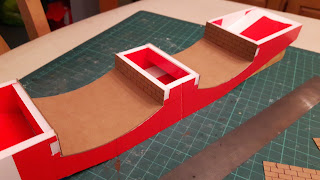 Faced with this situation, there's only one thing you can do.  Apply the brakes.  Admit it can't be done.  Ditch the stress and enjoy what you can.  Obviously, most of my available time went into making the shell of the bridge from foam core on Saturday.  What little time I had on Sunday was spent cladding the shell with my trusty cereal packet card.  You can see I managed to get the underbelly of the bridge covered.

It was at this point that I hit a snag.  If I hadn't been rushing so much, I'd have put the card on the inside of the bridge before assembling it.  Not doing that meant I now had a headache figuring out how to do a decent job with the slopes... 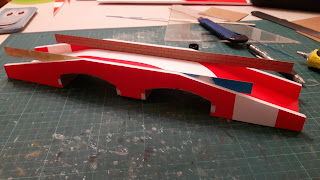 I aligned a long strip to cover the top part of the bridge.  Then, to avoid lots of calculations, I simply began adding the lower layers a single strip of bricks at a time, cutting the angle in each one to fit the slope.  I used the layers of brick that were in the top strip to make sure the brickwork pattern continued in its correct alignment.  As you can see in this next photo, I got better at it the further I went along. I'll need to fill in a few gaps very carefully! 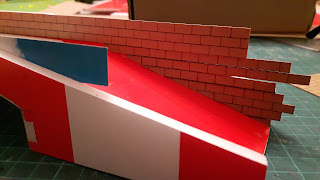 And that, I'm afraid is how far I got.  It's clearly not going to be ready for tonight's game.  If a job's worth doing, it's worth doing properly. And there's no way this could be done properly in the time I had left.

And the troll?  Let's not even go there!

So, there's a new deadline in place.  I now have a fortnight to finish making my bridge and paint my troll.  I don't foresee any problems with that timeline.  In fact, having the extra time means I can relax and enjoy the journey.  After all, that's what our hobby i supposed to be about isn't it?
Labels: 28mm Dark Age Wargaming 28mm Scratch Built Scenery Blood Eagle Dark Age Wargaming The Ministry of Gentlemanly Warfare