The Doom of Aethlweard Part Five 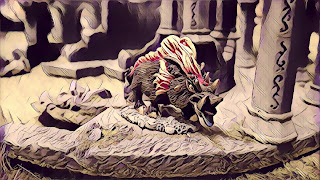 The Doom of Aethelweard can be viewed in all its original glory from the beginning by clicking on the following links:
Part 1: The Raid
Part 2: Making Off with the Spoils
Part 3: Bring Him Back Alive!
Part 4: The Sacred Banner 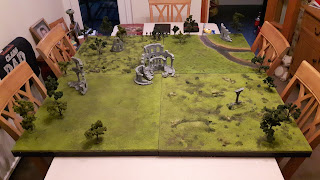 Aethelweard had been alerted to rumours of a legendary beast dwelling in the ruins of a once great civilisation.  He knew this fiery Great Boar would be greatly prized by the fell Draugr whose appearance had foretold his doom. Aethelweard determined that he would set out and kill this beast, for his priest Ordwulf had warned him of foul Wyrd practices that could take this fiery beast's tusks and bring about the end of the world... 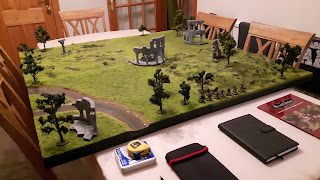 The fifth battle in our Saga would be The Wild Hunt (10.1.14) with theFog / Mist complication (10.2.3).  +50RP would be up for grabs for the force who managed to slay the foul beast.  Aethelweard had high hopes for this encounter, as success would depend on both brute strength in combat, and the ability to reach the beast in the shortest time.  The chance of Aethelweard's men doing this would be greatly enhanced by their victory in the previous encounter which won them the Scouts ability.  This enabled Aethelweard to nominate four of his Fyrd as scouts and deploy them an extra 6 + speed in inches into the table. 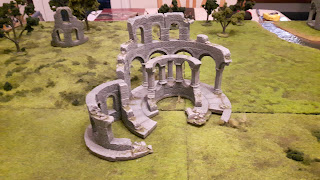 We placed the main ruin in the centre of the board.  The Boar would start the game in the exact centre of the table within the ruins.  Without an umpire, we decided to use a modified version of the rules we used to randomise the actions of the monks in the previous encounter.  At the end of each movement phase, we would roll a scatter dice.  This would determine the direction the Giant Boar would move.  However, if a model moved within 9" of the fiery beast, it would charge that model instead. 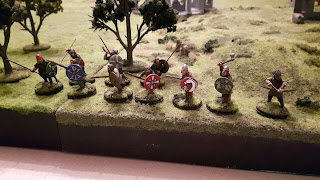 Above stands Aethelweard and his men for this encounter.  Below shows the view from the Draugr's line of approach. 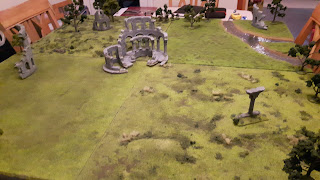 It was nice to see the new river section get its inaugural game... 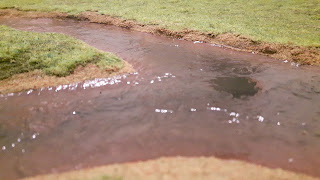 And here be the fiery Great Boar! 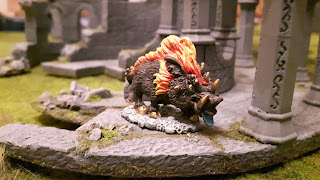 You can see here Aethelweard's forces deployed at the start of the game. 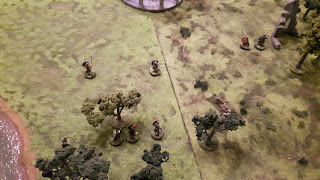 And here's the Draugr deployment. 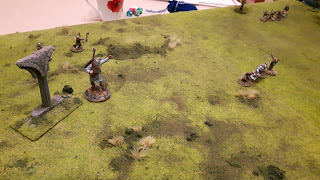 We diced for the fog and mist by rolling 2D10.  The result gave us the visibility in inches.  On a roll of double 1 or double ten, the fog would lift and not return.  In what is perhaps typical of our gaming experience we rolled double ten.  The fog lifted before the game began.  Well, we decided to apply our FudgeThat! rule and roll again.  Visibility was reduced to 16".  Not quite pea soup, but it did add a layer of mystery to the proceedings.  In our minds at least.  I don't have a smoke machine to make my photos more authentic...

In a completely atypical start, Aethelweard won the initiative roll and began pushing his men forwards.  With no idea where the beast would go, it was important to try and draw it out of the ruins.  he had to deploy his skirmishers as far forwards as possible, even though it meant risking poor old Algar (he with the blue shield). 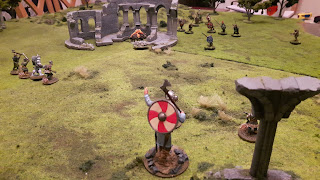 With the movement phase complete, we checked distances.  The closest model was indeed and he was within 9".  With a murderous roar and the thunder of giant hooves, the fell beast appeared from nowhere, spitting flames and charring the grass as it launched its attack on poor Algar. 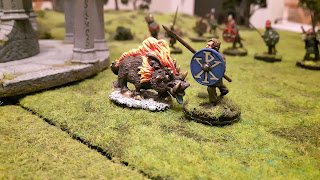 All did not go well in the resultant combat, and Algar fell beneath the mighty onslaught.  I had no choice but to throw everything I could at the Great Boar. 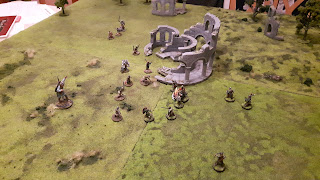 As the movement phase progressed, I was mightily thankful for the 10" move of my Fyrd.  However, my hardest hitting troops, Aethelweard and his Huscarl Eadwulf, would take another turn before they had any hope of joining the desperate fray that was about to take place... 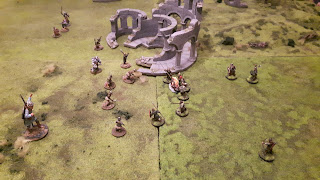 I had managed to get four Fyrd into base contact with the beast. 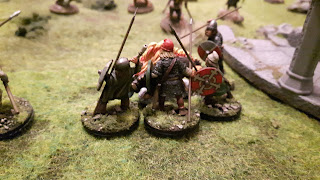 And now came the really difficult choice.  Four separate attacks, or gang up on the beast?  Ganging up on the creature gave me a much better chance of hitting it, but only one chance of killing it.  After a few moments of indecision, I decided to go for the gang up option.  The attack was a success!  I now needed to wait on a fate roll to decide...well...to decide the fate of the beast... 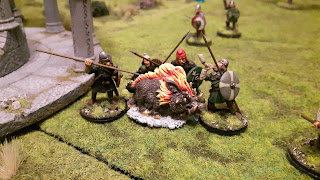 And would you believe it, at the end of turn two, the fiery Great Boar failed it's fate roll and died!  As Aethelweard stood agog at the situation, the Draugr chose to withdraw, their hopes dashed.

Could it be that Aethelweard's fate is on the turn?  It certainly seems possible.  With Algar passing his fate roll and therefore not being dead, he returns to fight another day with a glorious tale of facing a fell beast and surviving.  Aethelweard's force gained the +50RP and saw their points total soar to 412.  The Draugr remained on 256.

Next time Aethelweard will have to Stop the Ritual (10.1.16).  Can he do it?  Personally, I have absolutely no idea...!
Labels: 28mm Dark Age Wargaming Blood Eagle The Doom of Aethelweard The Ministry of Gentlemanly Warfare