The Doom of Aethelweard Part Four 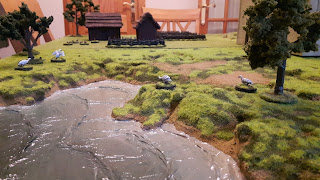 Soon after his failed rescue attempt in the marshes, Aethelweard learned that a party of Draugr raiders were making their way towards St Stephen's in the Weald. Realising that they must have learned of the Sacred Banner of Owain that rests there, Aethelweard summoned his Fyrd and set out to defend that most holy of relics. 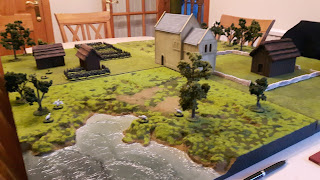 The church had been built on an old pagan site. The nearby river had been a place sacred to the Pritani in centuries gone by. Votive offerings were placed in the water in the hopes of healing and assurance. But as the people turned from their old ways to embrace the Christian Gospel, the church had been built at this well-known site to assert the might of the risen Christ. 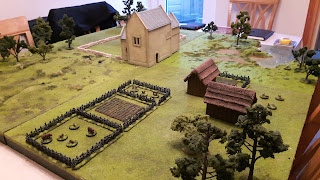 Sadly, having lost three successive battles with the Draugr, the Wyrd powers were gaining strength in these lands. This meant that the battlefield would count as Sacred Land (10.2.1) and any Christians wanting to perform a miracle will suffer a -3 to their Fate Roll to perform it.  So there was clearly no point in me bringing Ordwulf to this game either! 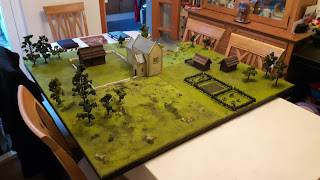 Our battlefield was set up for scenario 10.1.3 The Sacred Banner. St Stephen's of the Weald was placed in the centre of the table with its doors not facing the deployment edges of either Warband.  Using the layout of the church as a compass, this meant that the Draugr would approach from the west whereas my Anglo-Saxons would arrive from the east.  The doors to the church were located to the north and south. 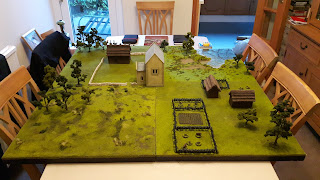 Six monks are at the church at the beginning of this scenario. They don't fight but do not leave the church.  If attacked, they have Armour Rating 7 and a fate of 6+.    Of course, the church model is a solid build and has no access to its interior.  We decided to place the monks within 3" of each door, dicing for each randomly.  At the end of the turn, we decided the monks would move in a random direction for a few inches.  This, of course, meant we were able to make use of some very old GW scatter dice.  We would roll for each monk, moving them 4" in the direction of the arrow on the dice.  If we rolled a 'hit' then they stood where they were.

We decided that a model which entered the church must take a full turn inside to go and collect the sacred banner before able to exit with it from either of the two church doors.  Aethelweard's men would gain +20RP to safely remove the Sacred banner off their deployment edge.  The Draugr would earn +30RP if they managed to do this.  In addition, each monk surviving the game was worth +3RP to the Anglo-Saxons.  Each monk killed would earn the Draugr the same points. 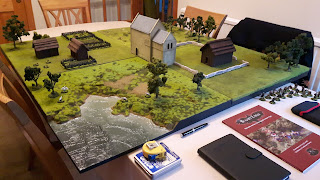 We began deploying our troops.  You can see my line of Fyrd Spearmen with Eadwulf and Aethelweard in the centre.  I placed my sole Fyrd skirmisher with hunting bow on the right of the line. You can also see how evenly the dice spread the monks... 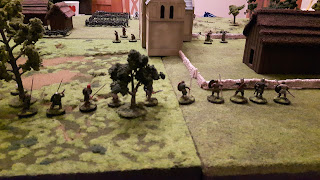 Arrayed against them on the opposite side of the table came the Draugr.  On their right flank came Glars Glarsson with his troops.  On their left came another group with a giant Jotun in tow... 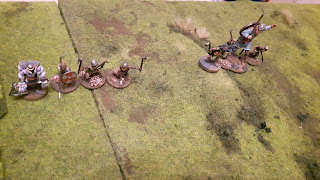 This was definitely turning into an anno horibilis for the clergy in Aethelweard's lands... 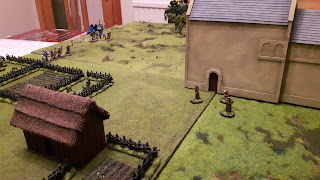 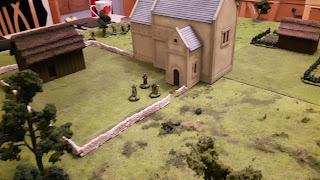 Then we let battle commence...! 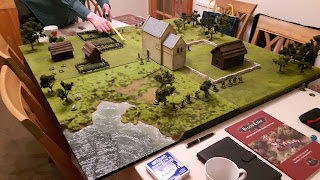 You can see that Aethelweard divided his forces in two.  The speed of his Fyrd would be critical in his attempt to secure the sacred banner.  Aetheweard and Eadwulf moved to support the Fyrd moving to the south door.  The larger group of Fyrd moved to secure the north door, hoping the wall would aid in their defence. 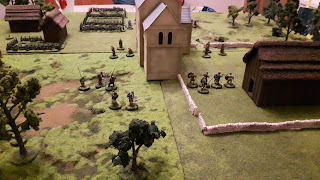 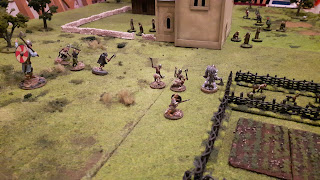 Successful initiative rolls allowed one of my Fyrd to reach the south door of St Stephen's.  The others took defensive positions against the approaching Draugr.  Two monks stood their ground, unwilling to move in the face of such evil abominations.  The monk on his knees, however, was quite active... 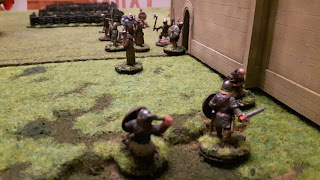 At the north door, the fyrd were able to take a strong defensive position, even if one of the monks refused to get out of the way.  My skirmisher with hunting bow stayed back, ready to cover his friends if they needed to fall back. 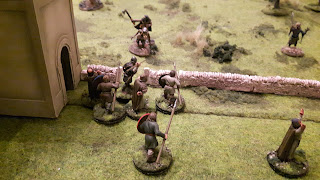 At the south door, things were about to get bloody.  Glars felled one of the Fyrd while the brave Saxon defended the door and refused the Draugr any chance of entry. Looks like that monk's prayers were doing the trick! 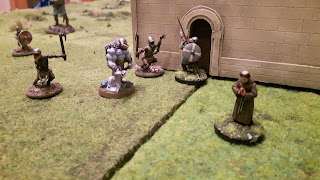 He even walked towards the foe after Aethelweard and Eadwulf joined the fray.  I didn't hold out my chances for that monk though... 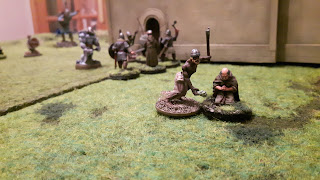 And then the unthinkable happened.  Glars Glarsson, the leader of the Draugr, can only be killed by hand or by a legendary weapon.  Aethelweard rushed him unarmed.  His blow was true and the mighty Glars fell to the ground.  Dead.  This was such an unexpected and monumental moment that we had to lie the figure down and take a photo! 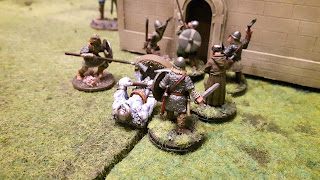 And with this turn over, I knew my Fyrd Spearman had been in the church long enough to exit on the next turn.  We rolled for initiative... and Aethelweard won! No surprises who I activated first then.  My Fyrd Spearman came running out the north door of St Stephen's at full pelt, carrying with him the Sacred Banner. 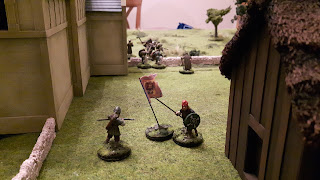 The remaining Fyrd put up a brave fight against the Draugr and the Jotun.  You wouldn't believe how many times the Jotun took a swing at the monk and missed... 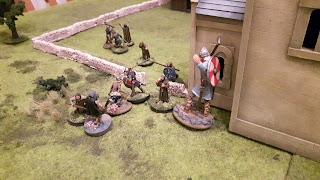 Things wouldn't turn out so well for that monk in the top of the photo though... 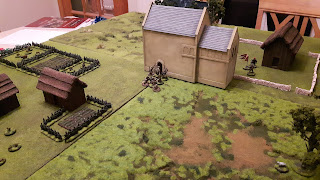 Meanwhile, the Sacred Banner was getting closer and closer to my deployment edge. 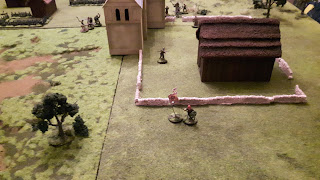 And as if to prove that miracles can still happen on sacred land, two Fyrd managed to knock down Soggan, the Draugr sorcerer. 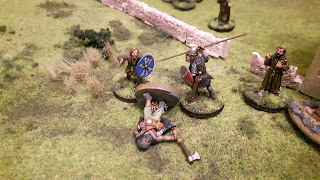 Things became a worry for Aetheweard and Eadwulf who were both knocked down at the end of the turn. 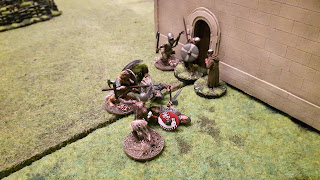 And the Jotun was proving to be monumentally incompetent in failing to kill the monk.  To be fair, he did hit him a couple of times, but that monk was making some spectacular fate rolls! 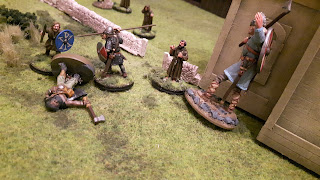 The battle ended with the Sacred Banner being safely taken off my deployment edge and Eadwulf and Aethelweard picking themselves up off the ground as the Draugr gave them the field.

Aethelweard lost three Fyrd spearmen in the battle.  fate rolls meant that only one had died and would thus reduce my points by -17.  However, I gained +2RP for killing two Draugr Warriors, and +4RP for killing Glars Glarsson.  Glars failed his Fate Roll and was therefore considered dead!  I earned +20RP for rescuing the Sacred Banner and +12RP for the four surviving monks.  I ended this game with a total of 362 points compared to the Draugr who are now reduced to a total pool of 256.

Could it be that our brave hero's fate is beginning to change?
Labels: 28mm Dark Age Wargaming Blood Eagle The Ministry of Gentlemanly Warfare