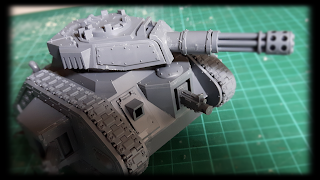 I'm really excited to be able to begin painting this, the first of my Leman Russ tanks.  This one's a Punisher variant bristling with Heavy Bolters and a most impressive Gattling Cannon.  I have to admit that it was a bit daunting taking the plunge and getting the paints out.  I'm still in the 'Pinch-Me-I'm-Dreaming' stage with all this.  The absolute last thing I want to do is to rush ahead and do a botch job with the painting.

Now, I'll apologise from the onset to any purists reading this.  I don't use GW paints.  I used to, but not for at least a decade.  I became a fan of Vallejo paints quite some time ago.  So I'm using US Dark Green and Khaki for my camouflage scheme.  These colours will also form the base colours for my Cadian troops when I get some. 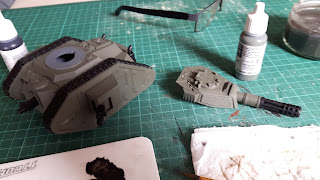 The first job was to cover the model with my base green colour.  I also took the time to paint the metal sections with a coat of black. 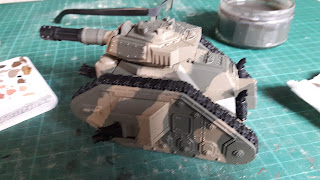 When this had dried, I began to paint in the Khaki camouflage pattern.  I began at the front left and worked my way over towards the bottom right on the other side.  I had the turret off when I did this. I then added extra sections at roughly equal distances from each other.  It's important to remember to do this to the inside of the track sections.

I then put the turret back on and turned it to the default forward facing position.  I then matched the camouflage design with the hull markings as my guide. 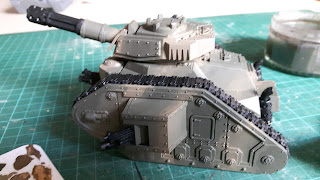 Now, this result is certainly pleasing, and not too dissimilar I might add to the standard Cadian pattern that's been around for over 20 years.  However, I think the contrast is a little too artificial for my tastes.  So I mixed some Khaki and US Dark Green together and applied it to the model to break down the contrast between the two colours.

Once this was dry, I applied my Army Painter Strong Tone (I like their stuff too!) to all the recesses in the armour and around all the rivets.  This gives definition to the model and basically makes the details pop out.  it gives a rather nice effect as you can see here: 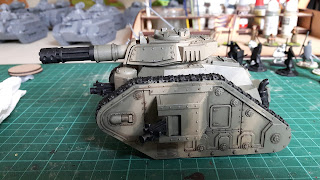 Next, I turned my attention to the metal sections.  I used a mix of black and oily steel, dry brushing successively lighter layers until using pure Oily Steel.  I do this while the previous layer is still wet to help the colours blend together. 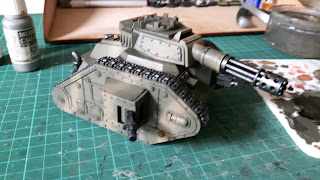 And at this point, you have a lovely Leman Russ that has just rolled off the production line. 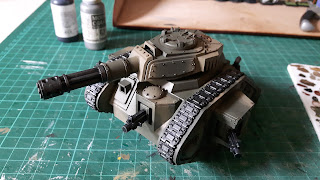 But I'm not finished there because I want to add some weathering and wear and tear on the vehicle.  To do this, I add some more of my Strong Tone to the exhausts as this gives a rather satisfactory look.  I then took some English Uniform paint and dry brushed it sparingly onto the tracks.  I don't do it evenly, and I don't do it to cover every part.  I want it to look like it's churning up soil, but I don't want it to look like it's been through somewhere as muddy as the Somme.

Then, the bit I really like, but worry about.  I want to add chips to the paint.  This is a really awesome effect when it's done properly and there are a lot of ways to go about it.  I heard a lot about the salt water solution method.  I tried it.  Once.  What you don't realise is that it's great when using an airbrush, and utterly rubbish when not.  As I don't use an airbrush, you can guess the result.  Another method is to use the side of your 2B pencil.

So I use the Foam-From-A-Blister method.  I basically cut the foam into sections and use them to apply the paint to my model.  I use two colours, a copper first and then my oily steel. As with most rules of detailing, less is definitely more so I'm not putting lots on here. 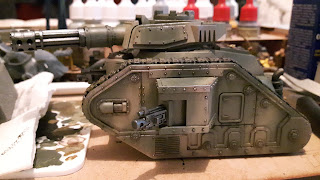 Anyway, here are some photos so you can see the end result. 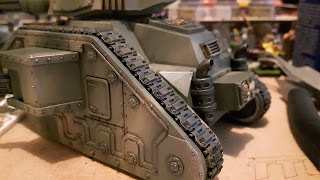 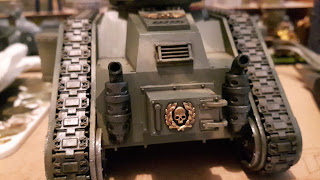 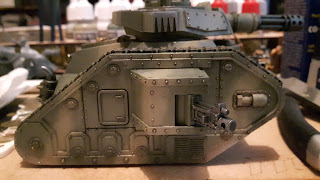 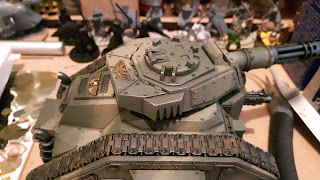 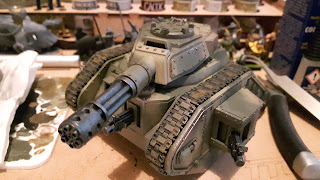 I'm not sure about what markings to put on my tanks, and with the absence of instructions, I've decided to wait until the new Astra Militarum Codex is released next month.  However, if any of you can advise me on this, I'd be delighted to hear from you!