When a Mini-Project Becomes a Major One

Well here's a turn up for the books!  Rather than posting about my latest painted minis or the next scenery build, I thought I'd post about that often neglected side of our hobby: the planning phase!

I guess that most people don't bang on about this part of our hobby because there doesn't seem that much worth sharing at this point in a project.  No fully-painted armies ready to display proudly.  No in-progress pics of the scenery.  No, this is about the stuff that launches all of that.  And as it's impossible to upload photos of your thoughts, I guess it's something that we don't tend to talk about much.

Which to me is a crying shame, because I love the planning phase!  It's where an idea, whether formed by seeing a miniature you like, or a period that you're interested in, or the chance to make something different for your games table, becomes something more.  I love the search for a suitable rule book; the hunt for a miniature range that has the models you like; the google searches to find examples of period architecture.  I love it all.

Of course, there are companies out there who make a specific range of miniatures for a specific set of rules.  I'm not knocking this.  There are many that I like immensely.  And if you've read some of my recent posts, you'll know that this list includes one, in particular, that I didn't want to like as much as I do.  But I really, really like the planning phase.

Of course, it can be a dangerous thing.  Take my current mini-project for example.  We're currently enjoying immensely our games of Blood Eagle from the excellent duo of Craig Cartmell and Charles Murton aka The Ministry of Gentlemanly Warfare.  We're in the middle of a Saga at present.  I say we, but as usual, my dice detest me once again and my poor Anglo-Saxons are losing every game.  I don't know if they'll make it to the end at this rate.  I'd probably be downhearted about it all if it wasn't such a great game. 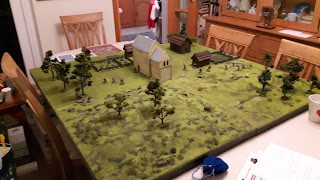 As I've already said on this blog, Craig and Nick Eyre produced a PDF a year or so ago which provided sample army lists for Robin Hood and the Sheriff of Nottingham.  We talked about giving it a go some time.  Well, we decided it would be good to make that some time into some time soon.  As in once the Saga is complete.  Which may not be too long away considering how my little men are doing.

Now, this is a really good thing as I remain a big fan of the Robin of Sherwood, and as you can see in my previous post, I've assembled a motley collection of miniatures spanning at least two decades and covering every influence from Errol Flynn to Richard Carpenter in the process.  But in true honour of the planning process, I'm delighted (and slightly daunted) to admit it has grown some arms and legs since then.

That's right!  Not even a ridiculous week or so of work can quench the creative spirit of my mind.  I might have been up to the proverbial eyeballs, but has that stopped me from thinking about more stuff I can do? Of course it hasn't!  Since then I've had to realise that I don't have a suitable model for Maid Marian. And having played Blood eagle for a couple of months, I know I'll need some civilian figures.  And some more models to represent the 'Authorities' that have a habit of turning up to a lot of our games.  Random roll did you say?  I told you the dice don't like me!


So here's the rub.  I really want to make some scenery for this project.  Something that represents the period 1190-1220 AD.  I've been doing a lot of searching online.  I know that the Normans brought with them the Romanesque architectural style which prevailed for the first hundred years or so until the Gothic style began to appear in Englandshire.  And I've come up with some lovely designs that I look forward to sharing with you in the coming weeks.


And as to the figures?  Well, despite my misgivings about their infantry figures, I've gone ahead and ordered a set of four mounted Teutonic knights from Fireforge Games.  I reckon if the authorities are due to make an unexpected appearance in our game, then they'd more likely than not be the Sheriff's men! Still a little concerned about making them, as once again I'm buying an individual sprue from a seller on eBay rather than buying a whole box which I don't need, let alone can't afford to do.  Maybe the box has instructions that would avoid me scratching my head trying to figure out why some arms are posed the way they are.  Still, I reckon it's worth the bother to make something that looks like it's from the Robin of Sherwood series.

And as for my Maid Marian miniature? Well, I solved that problem by going back to my favourite sculptors of all time, the Perry Twins, and to their crusades range in particular.  You may recall that I plundered some monks from this range for my Anglo-Saxons.  Well, they will also be making an appearance in my Robin Hood games too.  In addition, I've ordered a pack of their pilgrims from this range.  This is the pack in question.

The lady on the left will be my Marian miniature.  You can see them here.

And yes, I have also ordered these three who will be, from left to right, Captain of the Guard, Robert De Rainault, the Sheriff of Nottingham, and Guy of Gisborne.  You can view them on Perry's website here.

Oh yes, this mini-project has clearly become a major one.  I've gone from a dozen figures to paint to about double that number.  I've gone from making do with the scenery I have to hand to having some pretty big ideas about what I want to see on the table for this one.  And you know what?  I'm glad.  really glad!  You gotta love the planning phase.  It takes a side project and lets it take centre stage and bask in its glory.

keep your eyes peeled, folks!  This is going to be a thoroughly enjoyable ride!