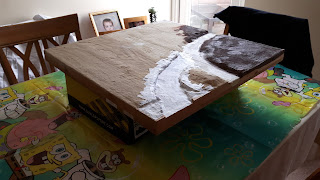 You may remember that a while ago I had managed to come across my old modular terrain boards while clearing out the loft.  Delighted that they were in such a good condition, they quickly appeared in the next wargame I played.  Since then they have become my go-to boards of choice, appearing in every game of Blood Eagle so far.  Two of the boards were never completed for one reason or another, so these became my new summer projects.  Both have water features.  The first came out very well, despite some problems that occurred whilst making it. 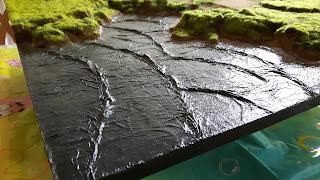 Here I  return to the second board.  The journey to this point can be found here. 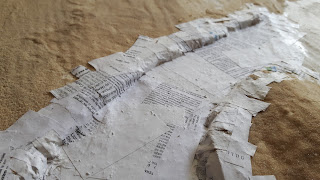 So what are my options?  Well, if I had the cash, there would be a few.  But I don't.  But in the hope that you are in a better position, dear reader, I'll outline some of them just now.

Firstly, the resin method.  I'd glue down some base mix, paint it up, add in some reeds and then buy some of Woodland Scenics' E-Z Water.  This comes in pellet form, is heated up in a saucepan and poured in place.  You'd need to stop up the ends of the river sections first of course.  And you'd do this after flocking your terrain.  You'd be best putting a little PVA on the banks to seal it beforehand as well.  But then you'd have a rock hard see-through large stream that would look lovely.

So why didn't I do this?  Two reasons, cash and depth.  I didn't make it deep enough.  Sigh.

Then there's the Realistic Water and Realistic Water Effects.  You can get these from Woodland Scenics and Vallejo.  Trouble is, I reckon the river bed isn't perfectly flat, and it'll show up the unevenness of the paper mache.  The only way to try this was to put the base layer of brown paint on the board and see if those lines are visible or not. 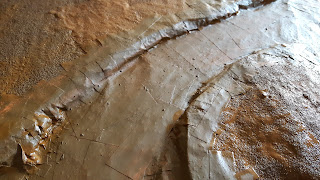 Conclusion: I need to put something on the river bed, whatever I'm doing.  I could use polyfiller.  If I had some, but that would make the river extremely shallow.  Whilst that's okay because it's the effect we're going for, I wanted to see some raised banks too.

So I decided to go for the method that served me so well on the last board and reached for some toilet paper.

I have to apologize because I didn't take any in-progress photos at this point.  Basically, you mix some PVA and water at roughly 60/40 and apply the glue to the board.  Then you put on some toilet paper and dab more glue on top.  You want to cover the river section in three layers of toilet paper.  Then you take your brush and begin stippling across the surface.  It gets rid of any design you may have on your toilet paper and removes the lines where the toilet paper overlaps.  You can see some of the work in progress on this next photo. 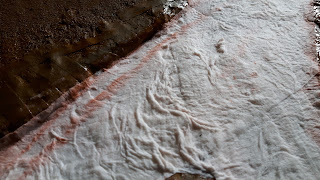 And here's the same section after applying my brush.  You can see that the lines have gone completely.  So satisfying!

You may be wondering why there's some bleeding of the brown base coat through the toilet paper.  There are two reasons for this.  I have to put my hands up and confess I hadn't left the paint for four hours to dry.  It certainly looked dry and appeared dry to the touch before I began this.  However, it appears the paint had pooled in some of the crevices along the riverbanks.  I also had a little brown paint bleed from my brush because I hadn't cleaned it as good as I should have.  Ho hum.  We all make mistakes from time to time.

Once I'd finished, I took a critical look at what I had done.  Whilst I liked it, I was worried I had created a raging torrent of a river. It definitely needed settling down a bit. 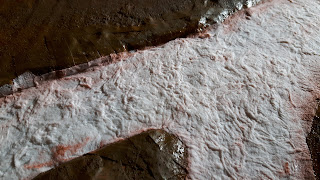 So I added some more of the water and glue mix to my brush and holding it at a 45-degree angle, I brushed along the river in the direction of the flow of water. I wasn't really applying pressure.  It was more about flattening down the raging torrent.  I confess I also did the same with my thumb in a few places.  And although I'm clearly making this up as I go along, I'm rather pleased with the result! 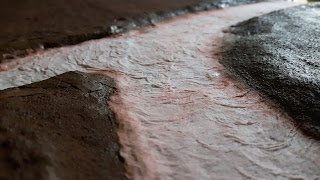 Now there are no two ways about this.  You have to leave this to dry for a long time.  I was seen using my wife's hairdryer a couple of times to help speed up the process a bit. But it needed a day to dry.  On the upside, toilet paper is a lot quicker to dry than kitchen towel.

It was with great delight that I discovered the board was fully dry this morning, so I hurriedly looked out my paints. You can see my faithful saucer I've had for over thirty years.  Yes, it's a saucer!  It's just got lots and lots of layers of paint.  I now use it for painting my scenery.  As you can see, I only noticed while taking the photo that I had forgotten my white paint. 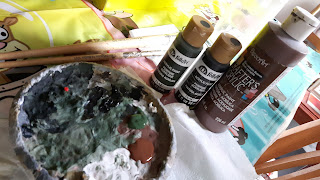 Once I'd rectified that, I began to lay out the different colours.  brown at the river's edge, followed by a mix of brown and white.  Then my green and a few bits of black and green mixed together for the deepest parts.  At this point, there's no blending so you have what can only be described as the most bogging looking rainbow imaginable. 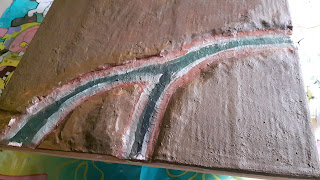 Then you take a clean brush, load it with water and begin to blend the colours together.  You have to keep going back to the water to clean your brush between colours, but you manage to create a beautifully blended water section. 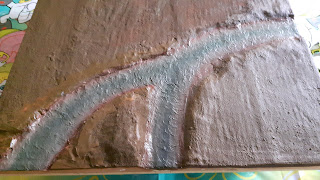 And with the paint being so wet, you can change the angle and get an impression of what it's going to look like. 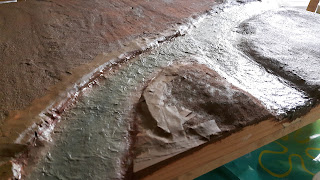 Here's the view from the other side showing the shading in more detail. 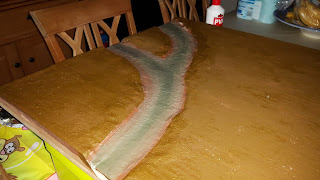 Since this would take a few hours to dry, I decided to touch up the sections of the board that hadn't been covered all that well. 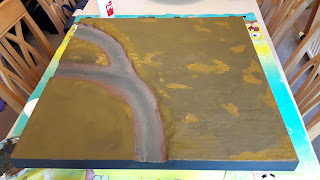 Nothing to do now other than wait for the paint to dry so the flocking can begin!

As always, thanks for stopping by to share this journey with me!  I hope my ramblings make sense and encourage you to have a go at making some scenery!
Labels: 28mm wargaming scenery Modular Terrain Boards Wargaming Boards Wargaming Terrain