The Doom of Aethelweard Part Two

The Doom of Aethelweard records only the sketchiest remembrances of what followed next in our Theign's most piteous plight. 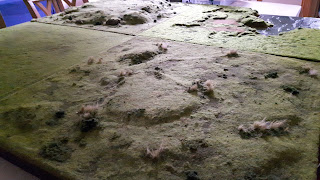 Having failed to protect the monks and their livestock from the fearsome Draugr, Aethelweard managed to rally his men and make chase across the moors. After all, without the monks, how would they manage to attend evensong?

Our boards are rather plain looking for this one, I'm afraid. Moorlands tend not to have the most exciting items of scenery on them, nor are they particularly noted for trees. This may go some way to explain why so few photos were taken of this encounter.  We're playing the scenario Making Off with the Spoils (10.1.2) and using the Twilight complication (10.2.4) over Moorland (10.3.10).  We decided that all ground would count as difficult terrain (1), which meant everyone would have an inch deducted from their movement each turn.  This would not go well for either Aethelweard or Eadwulf, whose excellent armour rating means they can't run.  With only a 5" move each turn, they were both doomed to find themselves mired in the bog.  Or bogged in the mire.  It's definitely one of the two...It would fall to the much lighter armoured Fyrd to stop the Draugr in their tracks. 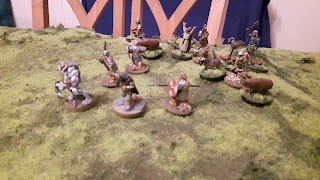 The Raiders chose a corner to set up in.  According to the rules, they would have five slaves and five sacks of loot.  As I only had two monks painted at this point in our Saga, that translated as two monks and eight animals.The tale of the remaining monks can be found here.  Aethelweard and his brave retinue would set up on two opposite corners.   Here's three of the brave souls. 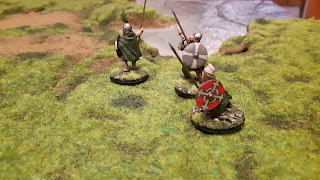 And as you can see, Aethelweard is already lagging behind his men...! 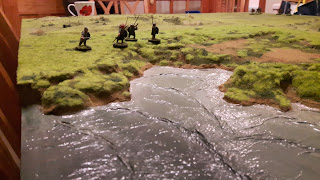 Eadwulf was leading the other group of Fyrd.  For some reason, I didn' event take a photo of them.

What followed were a number of turns in which Eadwulf put forwards his Fyrd in the hop of screening of the Draugr's advance, while Aethelweard urged his Fyrd up the rise ahead of them to catch the Draugr in a pincer-like grip.   If there were buffalo here, we'd be referencing horns by now...! 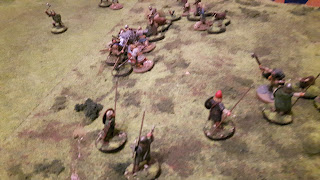 Fortunately for Aethelweard, the Draugr are not known to be the fastest troops on the moors, meaning that after a few more turns with Eadwulf and Aethelweard struggling to get anywhere fast, we had managed to form a shield wall of sorts as the melee progressed.  This largely consisted of people getting knocked down and getting up again while the line became more ragged.  Eventually, I managed to kill one of the Draugr and rescue two sheep.  This, you understand, was the highlight of the game for Aethelweard. As my fyrd fell to the Draugr, it quickly became apparent that Aethelwerd's brave but dwindling Fyrd could no longer stem the Draugr tide, so conceded the encounter.  Neither Aethelweard, not Eadwulf made it into combat. 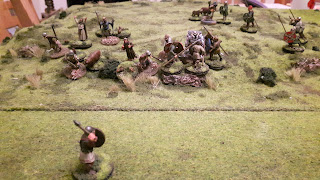 And at the end of the game, I had rescued two sheep for the grand total of +10RP, as well as managing to take three Draugr warriors off the table for +3RP. To add insult to injury I managed to faile the Fate rolls for two spearmen and my one skirmisher, earning me both two consecutive losses and a further reduction to my points total which now stood at 337.  Aethelweard would now have to try and rescue those monks...