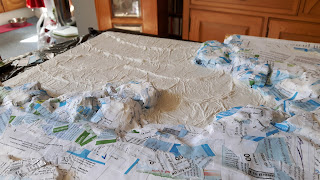 I've started a new daily routine.  Each day I go into the dining room to have a look at my modular terrain board.  Yes, I know it's going to take roughly 72 hours to dry out.  But that fact doesn't stop me from checking with an unrealistic hopefulness.  Friday came and went with the board looking visibly damp.  On Saturday morning I was hopeful of being able to do more work on it.  The paper mache and the water effect looked dry.  However, placing my hand tentatively on different parts of the board revealed that it was still damp to the touch in some places.

As hopes began to fade of being able to work on the board, I decided to do what anyone else would do in similar circumstances.  That's right.  I went to my loft and got down the other remaining board. I know, weak or what? 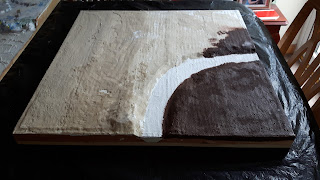 As you can see from these photos, this second board might have been in less of a mess, but it shouldn't be too hard to see why it infuriated me and was abandoned.  On the first glance, the glaring problem is the shape of the river.  That's the consequences of modular terrain boards when you need features to match up in different configurations.  It looks an ugly turn. 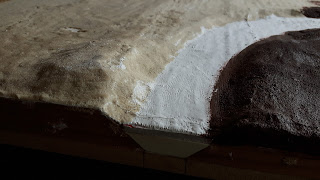 But there are other problems, most notable of which is the ridiculous ridge I somehow didn't notice when I...


Honestly, I have no idea why I didn't notice this.  Shoddy.  Very shoddy work indeed. 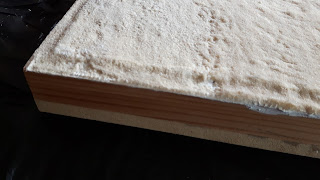 And let's not even mention the dodgy layers of PVA and sand that are clearly evident here. 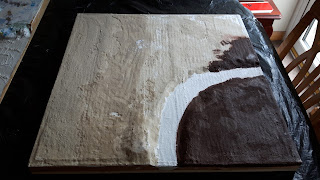 Well, there was nothing else for it.  It had to be taken outside and receive some serious attention.

I confess I was still trying to figure out what to do with the board.  I knew I wanted to make use of the vertical height the board offers.  Another flat section was simply out of the question.  I didn't want to make it into a mirror's image of the other board I'm working on.  As good as that would look, it wasn't going to be a good use of gaming space.  The obvious solution was to make either a stream or river section.

Now, with only a single board remaining, I would have to make sure that the feature joined two adjoining sides of the board.  This would allow it to sit in a corner of the layout.  To be honest, the existing shape of the board determined which two sides those would be.  It also gave me an excuse to start work on that unsightly protruding right angle... 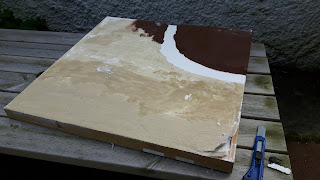 As I began to peel it back, the shape of the river/stream began to become quickly apparent. 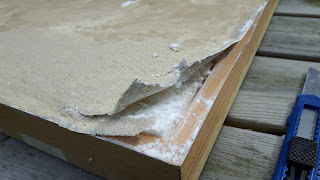 So I made vertical cuts through the sand and plaster cloth layers to reveal the basic shape. 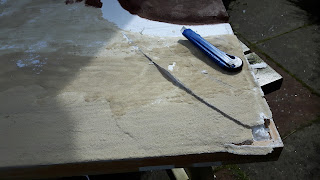 I then began to peel it free from the polystyrene.  This bit was a lot easier than I thought. 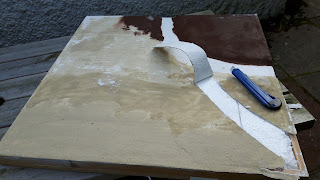 And here you can see the first problem that my work revealed.... 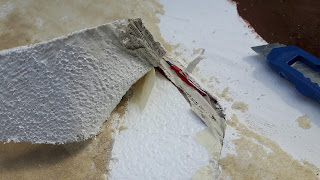 Yup, that's some newspaper pushed in to fill the gap.  When I removed some of the paper, the situation became much, much worse...  And when I removed the top layer of polystyrene, an even worse situation was revealed. 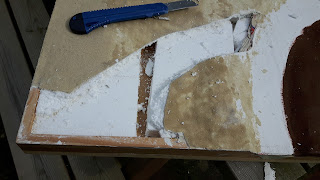 I had obviously been running out of polystyrene when these were first built.  This was doing nothing to calm my fears about the river bed. 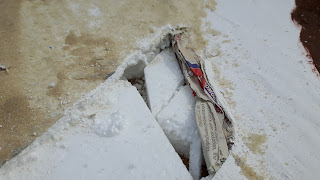 Of course, I needed to cut down the wooden edging where the new section of the river would run.  This would not have been a problem had there not been any polystyrene in the way.  Try inserting a coping saw into this kind of thing and you'll soon appreciate how hard it is.  I had to make a number of vertical cuts and then try and remove them individually.  It kind of worked.  But it was a nightmare.  I couldn't hold the saw vertically as it kept ripping up the polystyrene.  The result is the extra deep cuts you can see in the next photo. 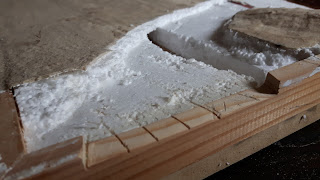 I gave it a sand, worried a lot, worried a bit more and then decided to allow the paper mache to rectify the vertical view.  I'll use some miliput to resolve the horizontal view at a later stage. 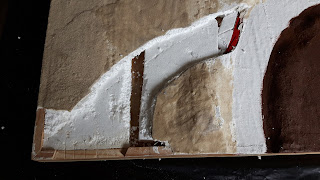 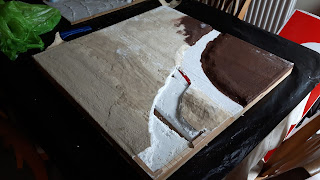 I then started taking what little bits of polystyrene I had removed earlier and started using it to fill in the gaps as best as I could. 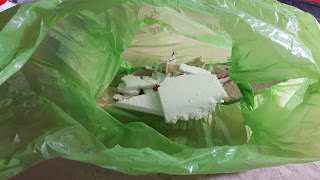 Which kinda rectified the problem.  You know, as long as you squint and look in the opposite direction, that is! 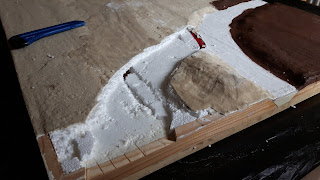 Then began my new favourite hobby: paper mache!  I mixed my PVA and water and cut some more of my 'To Be Shredded' papers into strips.  And then I began! 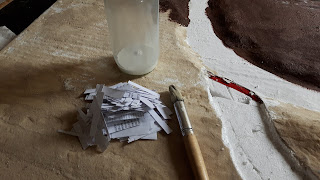 Now, this didn't go as well as I had hoped.  You remember the two-toned sand layers in an earlier picture?  Well, the lighter of the two sections decided it didn't like my paper mache. Or perhaps it could be said the sand liked it too much.  Every time I applied a strip of soaked paper, it refused to adhere to these sections.  What it did instead was to set the sand free to slop around the board.  My only solution was to apply neat PVA to the board before adding strips of paper.  This, in turn, meant that I had to keep going back to the bits I had done a few minutes earlier and try to convince them once again to stay where I had first put them.  I didn't have the same trouble with the darker areas of sand.  This was definitely a good thing, as this covered most of the area I was working on. 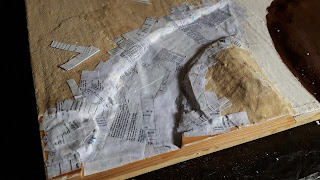 And after an hour or so, I had my extended river section completed. 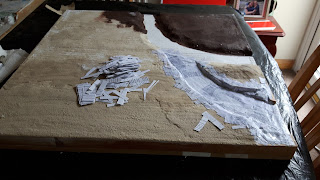 As you can see, I did finally manage to convince the paper mache to behave! 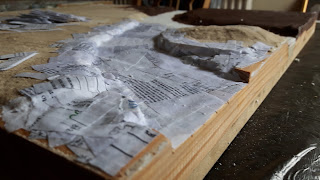 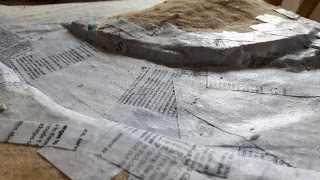 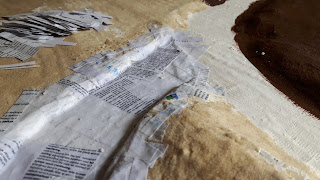 Overall I'm happy with the result.  I'm still a little concerned about the shape of the river, but I hope that the addition of foliage at a later stage will help to make the course of the water look even more natural. 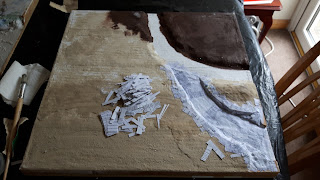 Latest breaking news: both boards are now thoroughly dry.  Hopefully, I'll get a window in the coming days to get on with the next stage of this project.  This will be the painting and flocking stage.  And for a lot of reasons, the water effects will be the last things I'll work on.  There are good reasons for this, but I'll explain more in the next post.