I So Wanted to Not Like WH40K 8th Edition!

So last night a good friend came over to introduce me to the spangly new spiky GrimDarkTM of the forty..somethingth millennium that is Warhammer 40K 8th Edition.  This was the perfect opportunity for me to dust off my Ultramarines which haven't seen the light of day in a LONG time.  Andrew's task wasn't an easy one.  Let me explain...

I so wanted to not like 8th. I hoped it would be another one of those editions that added a few tweaks, said the obligatory "No!" to some beardy behaviour, but basically remained the same as previous editions. If it did this, I reckoned, I'd justify saving myself some unnecessary expense.  You see, I love the 40K universe.  As a child in the 70's I spent my childhood playing with my Star was toys.  I saved my pocket money for all things Bandai.  As a teenager in the 80's, I discovered wargaming and my cash was spent on all things Games Workshop.  If my sci-fi began in my childhood in the 70's, my teenage years were spent in the 41st Millennium.  Games Workshop produces some cracking miniatures and I love the whole fluff of 40k.  But in these days of low income, the cost of GW products is firmly out of my reach.

I should also add that the last time I played 40K, we were just going into 5th Edition when the world was moving into 6th.  I never bothered with 7th.  So the contrast in game play is quite staggering. 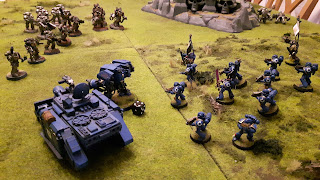 So what's different?To be honest, quite a lot.  What follows isn't so much of an actual review as a collection of my impressions having actually played it.

Do you remember the way different things used to happen in certain phases of the old turn sequence? You know, like you could take an extra move if you didn't shoot in the shooting phase? That's gone. The turn sequence is so much better. Everything happens in a certain order, but it works. And even though it's the same old IGO UGO order, the passive player can do some stuff. This makes it more engaging.

The turn sequence in 8th consists of the following phases:

Move. Love it. Bye bye everything moves 6". The Movement Characteristic is back! Some stuff moves better than others. Most troops move 6". Put them in Terminator Armour and they move 5". That lumping great brute of a Lord of Contagion moves 4".  You don't have to remember it coz it's on the data sheets which make prep time so much quicker, but more of that later. Oh, and because there are no templates, you don't spend forever faffing around with your ruler to make sure your men are always exactly 2" away from their fellow men. Move your troops and move on.

Shooting. It's simpler, quicker, slicker. It actually feels like Blood Eagle because remembering the rules becomes second nature. The big thing I notice though is there are NO TEMPLATES! And you don't miss them at all. No more angling it to fit the most enemies. No working out how much of a particular base is covered to determine whether they are hit or may be hit on a 4+. Blast weapons have a number of hits. These are resolved. Then you see how much damage each weapon does. This may be 1 or 2 or D3 or D6. That's how many dice you roll to wound. And the player whose troops have been hit determine how the hits are allocated. It's simply brilliant and much, much smoother.

Charge: player picks a unit and declares it will charge and who they are charging at. If the target unit is not currently engaged, they are allowed to overwatch.  This allows them to shoot at the charging unit, albeit they need to roll a 6 to hit. Once that's sorted, the charging player rolls 2D6 which give the distance they can actually move. Makes you judge your odds carefully.

Combat: There's no Initiative characteristic. Charging figures fight first. And instead of comparing WS, you just need to roll equal or above the characteristic on the Data Sheet.  No fuss.  No faff.  I like it.

Armour Penetration: It's back to being a modifier. No more AP5 means a 5+ save is negated but all others act as normal. It actually means any model has a chance of damaging anything on the table. I like it. A lot.

Wounds: Everything has them. Even vehicles. No Front, Side, Rear stats. No vehicle charts. No Hit Points as per 6th and 7th (not that they actually ever had any impact on my gaming). See also my Armour Penetration comments above. This means that vehicles aren't having to ride round in circles like some boring slow mo dogfight on the ground trying to hit each other's backsides.  And because wounding rolls are comparative rather than cross referenced on a chart, the chance of damaging actually becomes possible rather than impossible. No more do we need to roll a 7+ on a six-sided dice (which, for the uninitiated, meant you had to roll a 6 followed by a 4+). Slicker. Quicker. And I actually like putting some dice down beside the model's Base to record hits. Reminds me of some historical wargames I love.

Morale: Brilliantly simple. Simply brilliant. It all happens at the end of the turn, rather than during it. It stops the table getting all messed up. You take the Leadership of the unit, deduct the number of casualties from the total and roll a single D6 rather than two of them. You need to roll less than or equal to the target to succeed. If it's higher, you fail. If you fail, one model is removed from the unit for each point you fail by.

Command: they have a radius of 6" from the edge of the Base.  Any unit within that distance gets to reroll any 1's when rolling to hit. There are more rules for characters which makes them have a real purpose in the game and makes their location very important. I don't yet know what they all are just now, but I love this.  Saves you simply putting your commander with a unit based on the old expedient of Ennie-Meanie-Miney-Mo.

As to a downside to these rules, I was putting together my army using the Power levels. I like it a lot. Saves a lot of faffing.  But as I read through the Codex I had been loaned, I came across terms like Strategies and Battleforged. Now, these rules ain't in the free download.They aren't on the gatefold card set of rules that comes with the £95 starter set. And they ain't in the rulebook that comes with the £50 set. I know this because these were the copies I was loaned in advance of our game.  Nor do they tell you how to use flyers, so I didn't deploy my Storm Raven.  All of these rules are explained in the hardback rule book. But if you've not got a copy (as was the case for me before playing the game) you haven't a clue what's going on. So basically, you need the hardback for all the parts of the jigsaw to come together. It's not a big bad.  But it's worth noting that you aren't going to be able to play 8th properly unless you have it.

But when you have access to the hardback rule book, and the kind guidance of a good friend who can lead you through the game, you have a really fun system that is a far, far cry from the old days of gaming 40k.
I'm afraid I'm sold. Hook, line and sinker.

Supplementary note. As new units are released, you'll get some basic rules in the box. And, really importantly, you'll get the data sheet as well. That's all the stats for the game for that unit. In the box. it reminds me of Confrontation.  I also understand that GW plans to release a Chapter Approved on an annual basis. This will deal with any problems that crop up with the Beards.  Hopefully, that will mean that 8th Edition hangs around for a lot longer than its predecessors.  I for one sincerely hope it does.  it's a good system.  And for me at least, that's something 40K has not had for a long time.

Now if you'll excuse me, I need to go and check eBay to see if there are copies out there I can actually afford...!