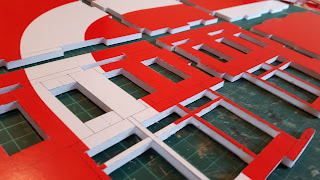 I find a real joy in making my own scenery for my wargames.  There's a tremendous satisfaction to be had in creating a nice bit of scenery out of the materials that others would throw away.  This, of course, suits my budget too!  Unfortunately, I'm coming to the end of my stash of reclaimed old POS foam core.  On the one hand, that's quite a sad situation.  On the other, it's great to see just how much stuff I've been able to build with it all over the years. 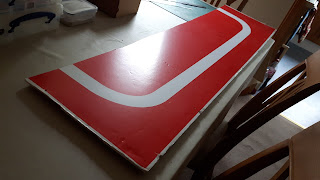 It does, however, mean that I'm coming to the more warped and damaged sections.  This wouldn't be much use to many modelers.  However, as I'll be covering my buildings with my trusty cereal packet card, these kind of dents don't bother me like they used to.  And I'll be designing my buildings with the usual level of joints.  These work to resist warping that has arisen from using old foam core that began life hanging from a shop ceiling and has spent many, many months in storage in my garage. 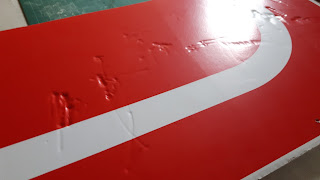 Of course, there's a simple trick you can use with any piece of foam core that has marks on it. That's right.  Flip it over!  Because no matter how careful you are, dents will cause carnage in drawing out your carefully measured and planned buildings. See!  All I have to worry about is that crease three-quarters of the way down this sheet.  Guess I'll start working at the other end then! 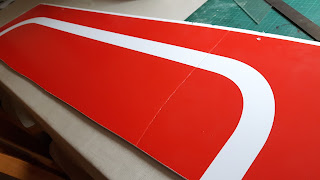 First things first, I measured out the sections of the building.  Now, I know that there's no clear right angle on this piece of foam core, but that's easily rectified with my 2' steel rule and large set square. 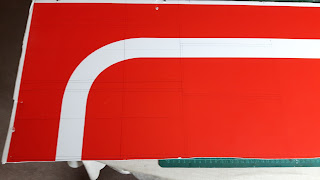 It's great to have such a large piece of foam core, but it's rather unwieldy when it comes to drawing out the details.  To help with this, I cut off the excess without wasting any of the material.  Much easier to work with! 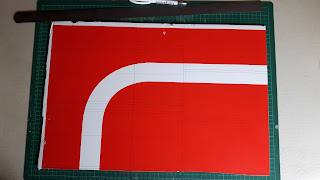 Now, unlike my last time making a modern board, I'm using loose sections of paving.  Whilst this allows an incredible amount of customization, it means that I have to raise my buildings slightly from the ground.  My TT Combat pavements are made from 3mm MDF.  My buildings are being made from 5mm foam core.  To keep things simple, I'm simply adding a 5mm height to the ground floor of my buildings, meaning there will be a slight step up into them.

It's worth pointing out that this is probably the most time-consuming part of my build. I know that the wise among us will draw out full blown plans.  I don't.  I'd like to say that there is some clever reason why this is the case, but I can't.  It's for a simple reason really.

I can't get my head round it.

Seriously.  I can figure out all the joints and the best method of construction as I start laying it out. It comes naturally. But when I try to make a scale drawing, my brain begins dribbling out my ears. Maybe it's an impatience to get on with the actual task at hand.  I don't know.  Maybe it would be quicker to try and figure this all out on paper beforehand.  I just know that I work better this way. 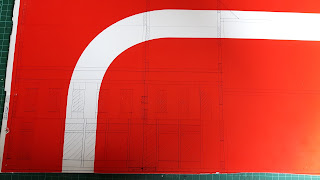 Incidentally, the windows on the upper floor caused me a little headache as I tried to remember the best way to go about spacing them evenly across the length of the wall.  To resolve this, I simply added the number of required windows (5) to the number of spaces around them (6) and then divided the length of the wall by the resultant number.  If you're interested that was 20/11=1.8 to 1d.p. 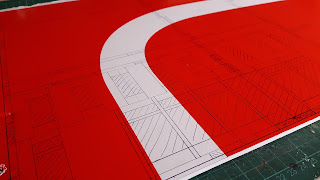 I've got to be honest, I'm pushing the boat out again with this build.  I'm trying things I would never have even dared considering a couple of years ago.  I've tried a lot of different ways of making buildings over the years.  This gives me the confidence to try out things and push the boundaries of what is possible with the materials I'm using.  Look at the photo above if you don't believe me. Those struts at the windows are only 3mm wide.  I know you're thinking I'm mad, but what if this actually works?

I've said it before and I'll say it again. You really do need a sharp knife to cut foam core. And a nice steel rule so you cut the foam core and not the ruler.  It's also really important to realize that you're not going to cut it with a single pass of the knife. You'll need three cuts. The first cuts through the top layer of card. The second cuts through the foam layer. Your third cut goes through the final layer of card.  Sometimes you might need a fourth cut.  If you're cutting a window section out of the piece, it'll take longer as you make sure you cut properly.  Make sure as well that you keep the blade as vertical as possible while making your cuts.  In the next photo, you can see the main sections cut apart from each other. I prefer to work on a separate piece at a time as it's a lot easier to rotate it, rather than keep rotating the ruler and blade every time I need to make a cut. 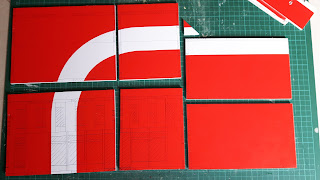 This is a really time-consuming job, especially if you want it to be done right.  However, there's no point in rushing this stage as it's the foundation on which everything else is going to rest on.  Ruin this and you ruin the model. 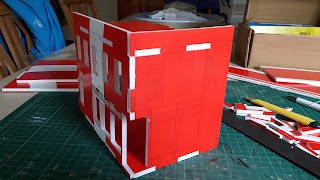 Which is why I only got as far as this yesterday.  However, you can see the front section has been cut out successfully (as well as stressfully).  I also managed to cut out the recess for the corner door and enough of the joints on the front side section to allow it to fit together with the front, the base and the flat roof.  And to be honest I'm delighted with how it's looking. 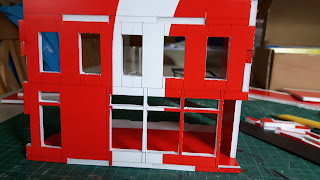 This morning I returned to the project and had a thoroughly enjoyable time cutting out the remaining sections.  Laid out on my cutting board, they look like this: 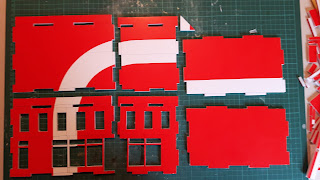 The following few photos show what the assembled building looks like with a dry fit.  And if you're wondering about the small triangle in the top of the picture is all about, it's for inserting above the door.  I didn't add any joints for it as it fits at a rather delicate corner of the building and I wanted to make sure that its structure wasn't compromised.  A small section like this will glue on fine enough.  I hope! 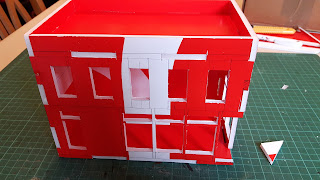 it's easier to work on the sides of the building when they are separate as they can be laid flat on the cutting board.  There's always a trade off with this method.  As I learned with my Anglo-Saxon Church, great care has to be taken with aligning the brick work correctly.  This will be just as important here as this building will have modern brickwork on it.  But I'll save the joy of head scratching a solution to that once I get to it in a future post. 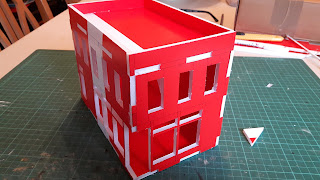 I'm really excited to be able to share how I'm going to build up and detail the windows in a future post. 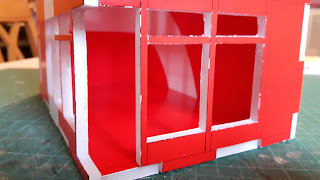 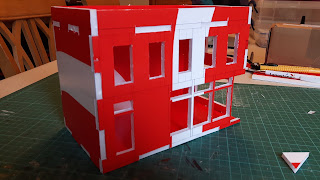 Of course, the back sections are rather boring in comparison.  The brick work will make it look more appealing than it does just now. 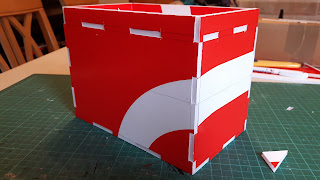 As always, thanks for stopping by and keep checking back to see my progress in future posts!
Labels: 28mm Modern City Scenery 28mm Wargamig Scenery A Fistful of Kung Fu All Things Zombie Mad Dogs with Guns Scratch Built Scenery TT Combat