Zombies and Golfers and Scale, Oh My! 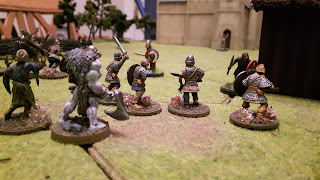 This week saw the launch of our games of Blood Eagle (which is both awesome and highly recommended!) and next week sees the launch of Zombie Golf (which is also both awesome and highly recommended!).  Being a regular player of Zombie Golf, you'd think this would be a complete no brainer. I thought like that when I agreed to introduce a friend to the game. How wrong I was!
I've been playing All Things Zombie, and it's supplement Zombie Golf for a long time. But here's the rub. Whilst I scratch built the scenery and painted a handful of survivors, I didn't provide the necessary horde of Zeds. It was a fair share of the prep. And it worked wonderfully. Of course, I also purchased some Zeds, but never got round to painting many. Of course, we have often talked of coming back to ATZ (you know, like we shave often done so with Zombie Golf) but I've always had another project on the go. Until now. 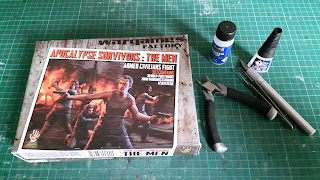 So what have I learned since I committed to the launch? The scenery isn't a problem. I've plenty of that. But as to the miniature situation...
I still only have 1 Zed painted. (Modern Zeds that is. I have more than a platoon of Nazi Zeds painted, but that's a different game entirely!) I have a golfer. One. But I need two. The paint brush is clearly going to be busy these next few days! 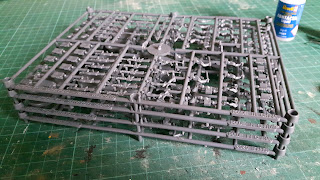 Now, I've been gaming in 28mm since the good old days of 25mm, long before it meant anything from 25-35mm. I personally blame GW for getting me fixed on that one. And years ago there wasn't all that much choice for gaming the Zombie Apocalypse in that scale. This was why I was so delighted when the then fledgling company Wargames Factory released their pack of 30 plastic Zombies. Of course, I'd have to wait a few years until they released their seminal Apocalypse Survivors: The Men and shortly thereafter Apocalypse Survivors: The Women. But when that happened, so began my opportunity to game All Things Zombie!  By that time their sculpts and production values had increased tremendously. So too had the scale creep, although we were more than happy placing the all new taller survivors next to their shorter undead brethren. We just built up the bases of the latter, that's all...
Of course time moves on, and I was saddened to see that Wargames Factory are no more. They sold everything on to Warlord Games. Who have spent the last year or so repackaging their ranges and replacing the WF logo with their own name. This probably means that these models will get a larger audience. But I feel for wargames Factory. They had mixed reviews for their minis. However, everyone is raving about them now they have the Warlord Games logo on them. I also feel for those affected by the sale. Wargames Factory had a lot of kudos. They gave employment to people with learning disabilities. Much respect to them. I doubt that has continued.
However, when it comes to Warlord repackaging their Zombie figures for their own Project Z (which is far inferior to ATZ and had no thought for a good game of Golf btw) they have made a number of significant alterations. Especially where the Zeds themselves are concerned. They match the scale of the survivors much better. And, as a nice added touch, a lot of the heads and bodies are now the undead equivalent of the survivors. So if you're that way inclined, you can substitute your hero for the appropriate Zombie when they turn...
Talking of heroes though, I needed to make another golfer. I found my last remaining Not Alex figure. I took the baseball bat option. You can see the pieces cut from the sprue. Again, WF pioneered the idea of giving you bases for your minis on the actual sprue. Of course, Warlord have changed the logo on the underside of the base, but that's understandable. 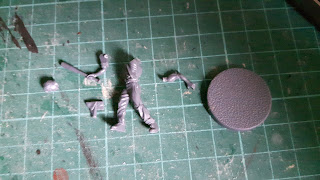 I then cut down the baseball bat and used super glue to affix a piece of florists wire to act as a golf club. 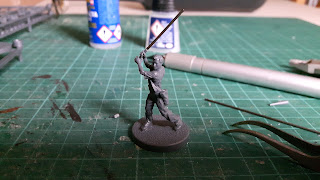 At this point I decided that it was a little too long and cut it down. But not before I had taken the next photo. 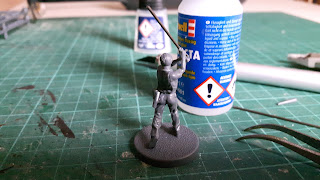 I then turned my attention to the all new Zombie Frame. 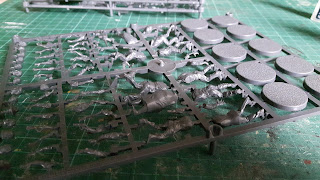 From which I made these two Zeds. Gotta love the one on the left. To be honest, he's the reason that I went for the sprue in the first place. That and Warlord's recent half price on sprues sale...! 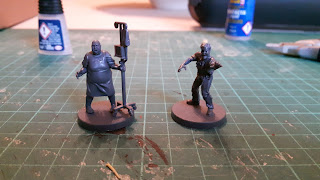 They are rather nice. They also have the same high level of detail in their sculpts, something the original Zombies didn't have. That fact is particularly apparent in their faces. 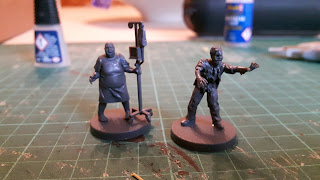 And with a judicious blob of miliput, my golfer has a club! Sticking him between the two new Zeds shows how well they fit together in a scale comparison. 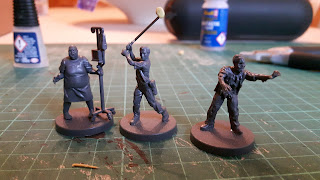 In the next photo I've added one of the original Wargames Factory Zombies. As you can see I have already undercoated him in grey as per my recent trial. By building up his base, I don't think he looks out of place scale wise. He does however lack some of the definition of these Warlord Games Zombies sculpts. 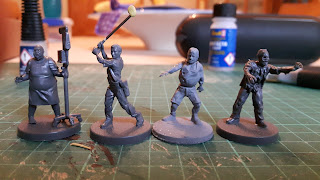 And with another nod to the old Wargames Factory box, here they are again. 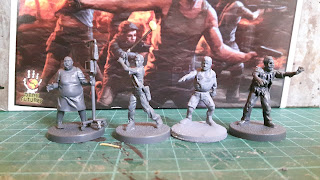