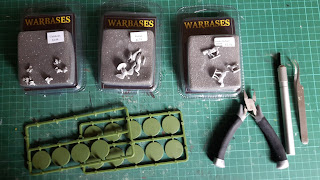 For a long while now I've wanted to add some fauna to the flora of my wargames tables. But with limited funds, it's not something I've been able to do.  I've needed the cash for my troops. Thankfully though this has changed courtesy of The Ministry of Gentlemanly Warfare.  Those pesky Vikings will be plundering my poor Anglo-Saxons, and making off with livestock and a few monks no doubt. This of course means I need some animals. So armed with the need to find both a good bargain and excellent quality miniatures, I set off into the good old interweb to see what I could find. 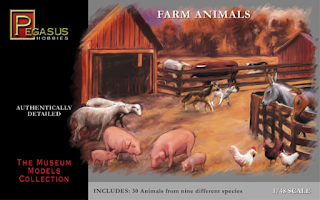 I've long had my eye on the 1/48 Pegasus Hobbies farm animals set. You get a serious amount of animals for your money. I reckon they'd be perfect for anything from the AWI onwards. My only cause for hesitancy was whether or not they'd be a little too big for my miniatures. 1/48 scale works great with many ranges when it ones to vehicles, but there are many who would justifiably argue that you need 1/56 scale stuff if you're using 28mm miniatures. If you've got the spare cash, I reckon it's be worth taking a risk on this set. But I don't. So I haven't.

Redoubt Enterprises have a lot of animals in the Body's Bits section of their website.  Again, I have been tempted with these. But I didn't buy any. Gripping Beast also do some animals. The benefit here is that they are the correct breeds for the Dark Age period. Yes, I'm that fussy about these things.  There might not have a large range, but at least they're accurate!

I was all ready to go and place an order with GB, when I decided to do a random search on Google. And boy am I glad I did. You know Warbases? They do a range of animals. And they are just lovely. And what's more, they are sold at a fantastic price, which has allowed me to go for quite a pick and mix of animals. I've some iron age pigs. I've some Soay sheep. I've some Anglo-Nubian Goats. I have some geese. And some chickens. 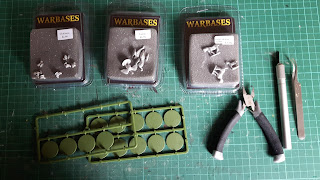 Of course, the deliberations soon turned to how to go about painting and basing my animals, and the little chickens in particular. I like the idea of them being together, but don't want them all on a singular base. I prefer to base my figures before painting them for fear of sticking my base mix to my newly-painted miniature. As always, I'm basing my animals on circular bases and I'm going to be relying on my trusty 20mm and 25mm diameter plastic bases from Renedra. I'm not a big fan of tall bases as they elevate the model too much from the ground. This in turn throws off the height of doors and building in general. 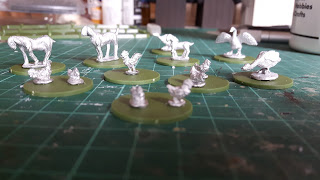 The Warbases chickens come in a brood of six hens and a cockerel.  I'm resisting the temptation to put three hens on one of the  bases and going for the absolute average of two on each, leaving my cockerel on its own. This, I reckon, will make them easier to paint. 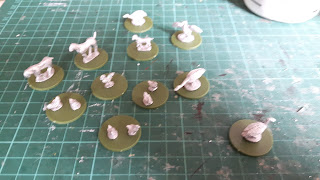 I decided to base each goat individually, allowing the kid to frolic freely if it so wishes.

My choice to base each goose individually was pretty much the only option considering their size.  The same will happen to the sheep and pigs. You just can't see them here because my friend is away painting them just now.

The hens come in three different poses! Two are seated, two are pecking at the ground and the last two are having a wander about. There was a little flash between the legs of these last two. I carefully removed it using the smallest drill in my pin vice. I had to use the very top of my scalpel to remove the residue flash as I couldn't find a file small enough. Just be careful when you do this as chicken aren't noted for having stout legs. It's a fiddly and delicate process!

As with all my models, I apply a base mix made of sand, ballast and cork chippings which represent larger rocks.  Having stuck the metal miniature to the base with super glue and left it to dry, I then apply a liberal dose of PVA.  You can see this modeled by one of the geese in the next photo.  The glue will shrink as it dries. 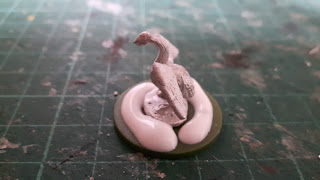 I then take one of my old brushes and use it to move the glue around the base, making sure it doesn't go over the rim.  I also tease it as close to the model's feet as I dare.  Then it's time for a dip in the base mix as you can see in the next photo. 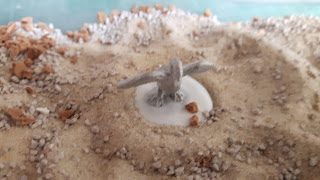 It's worth pointing out that I flick the sand over the base rather than move the base through the mix whilst holding on to the model.  You can see in the photo that I add a piece of cork to the base before I begin flicking.  If you move the model about you manipulate the PVA.  This can leave your poor unsuspecting models being smothered on one side.  It's not a pretty look, I can tell you! 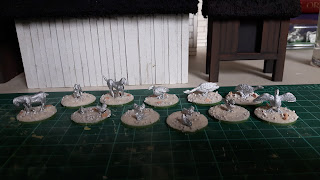 And what of the titular ducks you say? Well, yes, they make a lovely set of them too. But I couldn't see the Vikings plundering them, so couldn't justify the expenditure this time. Which is why you can't see any here in this post.  False advertising?  I'm just a sucker for a decent play on words!  However, I will get myself a set soon . Along with the foxes and badger, the stag and we'll, pretty much the rest of this lovely range!