A few days ago we had the opportunity to play another game of Fear and Faith with a little Kooky Teenage Monster Hunters thrown in for good measure. As always, we're using my son's Lego Monster Fighters range. Ganesha Games' products seem to fit wonderfully with Lego. What follows was first shared on Twitter as the action took place. I'm just fleshing out the details a bit here as requested.

According to the dice, our adventure would take place at dawn. The sun would rise on the second turn over rolled by the evil player. The dice further decided that it was a full moon. So until dawn broke, that pesky werewolf had a +1 to his activation rolls. And then to compound our heroes' misfortune (which at this point was still awaiting the arrival of the adjective 'epic') the dice again decided it was raining. This meant all ranged attacks were at -1. You know, at this point I actually saw Sir Rodney Rathbone sigh... 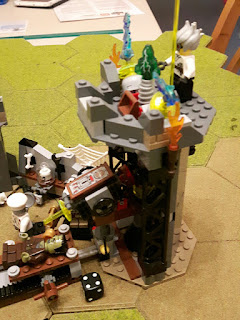 We set up a simple scenario.  Our brave Monster Fighters would have to reach the Mad Scientist before he attempted to raise Frankenfig.  To foil the dastardly plot, they would have to reach base contact with any part of the infernal device and spend a total of 4 Actions disabling it.  As this was located at one side of the board, we decided to roll a D6 to determine which of the other three table edges our heroes would arrive on. The die chose the opposite side, meaning they'd have the greatest distance to travel.  Sir Rodney wasn''t the only one sighing by this point, I can tell you!

Obvioulsy we had more minifigs that we could use in our game, so we set up a lot of ghosts to float around the tower spires.  We also had Frankenbutler helping Lady Vampyr to brew up some crazy potions... 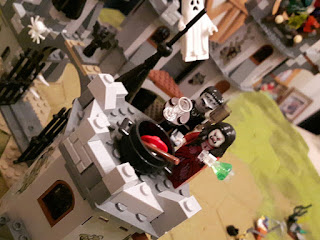 Our heroes set off across the table towards their objective.  Or at least that's what they hoped to do.  Not even the presence of Sir Rodney Rathbone in their centre made much difference.  As a leader, he adds +1 to all Quality rolls taken on characters within Long range of himself.  It should have made this a simple task, as they effectively were activating on a 2+.  Ah, the good old 2+.  You know what happens with them.

That's right.  I kept rolling 1 after 1 which created turn over after turn over.  This meant my heroes were by now stretched out in a straggled line that snaked its way towards the objective, but left each minifig in danger of attack.

Which of course happened quite quickly.  A combination of my bad dice rolls left Frank Rock hopelessly abandoned and out of actions in time for the full moon, the Long Move and 3 successful actication rolls meant poor Frank was the recipient of a charge and power attack.  Net result; gruesome kill.  And as we're playing with Lego, this meant we could pull him apart, scatter some transparent red squares and make it look as sick as possible.  Take a look if you don't believe me.  Poor Frank was so scared it even blew his hair off! 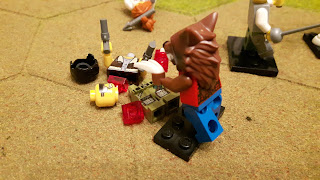 And while I was still reeling from the shock, I rolled another turn over and watched as the werewolf charged Jack MacHammer as he was pinned by two Man Bats.  And surprise of surprises, He too received a gruesome kill. 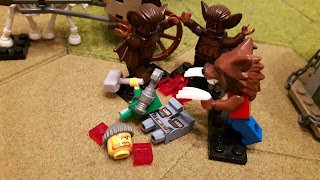 Major Quinton Steele was my only success of the game.  He managed to get all the way over to the infernal contraption, making full use of the move and shoot capabilities afforded to him by his assault rifle.  Despite the rain, his shots managed to knock down two Zombiefigs.  This put him right beside the mechanism, ready to start disabling it on a future turn.  Of course, Zombie Chef was having none of it and moved in to attack.  Thankfully he ran out of actions just to get there.  I let out a sigh of relief. 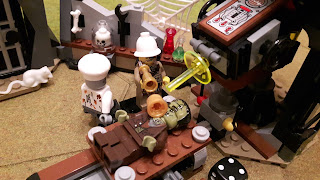 Here's the bigger picture for you all to see. 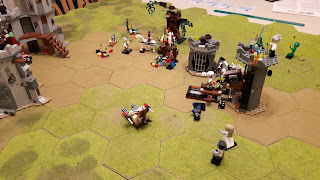 Oh, and there goes Ann Lee, knocked down by a charging Mummy on a chariot. 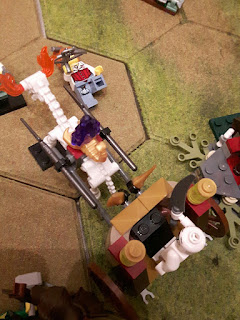 And here comes a manbat to help the mummy ensure that both Ann Lee and Sir Rodney are killed.  Not gruesome kills, but bad enough. 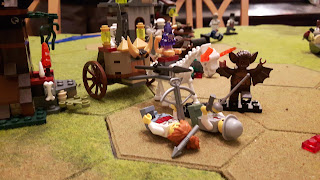 All my hopes were pinned on Major Quinton Steele.  He survived the necessary morale roll.  I braced for the combat result with that pesky Zombie Chef.

Guess what?  He failed.  He was forced to retreat, but with nowhere to go, the rules said there is only one result: killed.

As far as the mission went, it was an utter failure.  As far as gaming goes, it was great fun!
Labels: Fear & Faith Ganesha Games Kooky Teenage Monster Hunters Lego Monster Fighters