Much Ado About Mutch and Scathlock 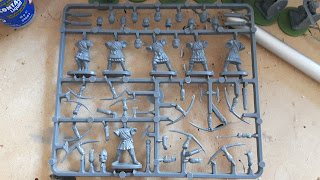 Okay, okay. I'm supposed to be working on my Sub-Roman British for Dux Britanniarum,  but I can't help it if my mind wanders to other things now, can I?

You see, I had a birthday recently which meant I was able to purchase Gripping Beast's Late Roman Infantry and a sprue of their Saxon Theigns to accompany my Renegade Miniatures Saxons that would line up against them. In the process I also purchased a sprue of Conquest Games' Medieval Archers. And as these spues have a few more minis than I need for the aforementioned project, all this got me thinking about the Merrie Men of Sherwood.

The obvious thing to do would be to head over to Conquest Games and purchased their Robin Hood range. After all, they are heavily influenced by the Robin of Sherwood TV series. However, they are cost prohibitive for me.

So I'm going to be using my old GW Bretonnian miniatures, Bertrand le Brigand, Gui le Gross and Hugo le Petit. And it was while I was looking at my Medieval Archers sprue for Dux Britanniarum that I began to form plans for Will Scathlock aka Scarlet and Mutch the Miller’s Son. 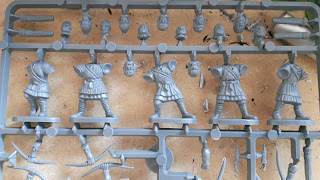 I reckoned I could use the body on the left for Mutch, and the one on the right for Will. I'd need to do a lot of conversion work, but as I'm working with plastic, I didn'the think it would be too hard. So I plucked up some courage and began. 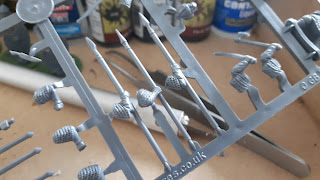 According to my list, Mutch is armed with a Quarterstaff and a bow. At first I decided to use the middle Spear arm you can see in the picture above. This would have taken one option away from my Theigns sprue. 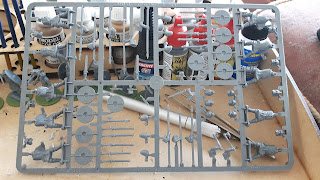 However, I decided it would be very difficult to fit the sleeve to the torso. So instead I opted to use one of the Spear arms from my Late Romans.  So along with the archer torso, I took a quiver of arrows, a head and a bow in the left hand. Oh, and a 25mm diameter base from Renedra. I use them a lot. 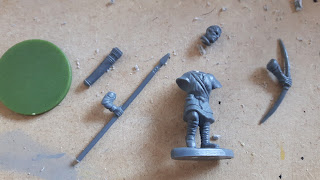 To turn a Spear into a Quarterstaff isn't too difficult. The obvious thing to do is to chop off the metal Spear point so you just have the staff. However ,  this leaves you with a wonderfully smooth and cylindrical staff. This doesn'the look much like a Quarterstaff to me. So I set about whittling away at it. It'seems a similar process to using your scalpel to scrape away at a mould line on your plastic model. The main difference in this instance is that you don't want an even finish. So you do this process to different parts of the surface, working your way around the staff in an irregular pattern.  And you repeat the process applying more pressure in the middle of the area you're working on. If this makes sense, you'll end up with a staff like these one in the next picture. 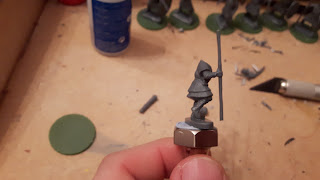 Of course, in order to fit the arm properly, I had to cut it down a little to accommodate the length of the sleeve on the torso. I also shaped it with my clippers and scalpel so it would fit correctly.

It was at this point that I realised the bow arm didn't look right. Not only did it make the other arm now appear too short when once it had looked fine, but the path of the bow would have gotten in the way as Mutch walked along with his Quarterstaff.

There was nothing for it. I'd have to find another appropriate arm from the archer sprue, and a left handed one at that. Luckily there was one hiding in there, and the open hand gave me an idea.

The next moment I was whittling down the bow, removing the hand and arm until all I had was the bow. This would now be slung over his shoulder. And when I stuck all the bits together, I found myself face to face with my Mutch. 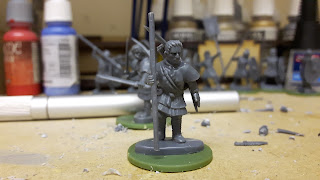 Please ignore Will in the background. I'll come to him shortly. I just took the photos out of sync with the build. 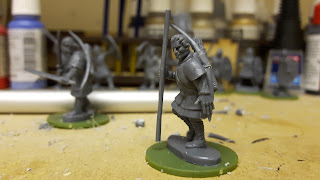 My only niggle with this build is the size difference in Gripping Beast's hand compared to Conquest Games'. I hadn't noticed this before I had completed the build. 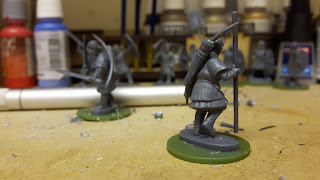 Buoyed by the success of my conversion, I turned my attention to Will Scarlet.  I removed the following pieces from my Medieval Archers and Saxon Theigns sprues. I would actually need some more during the build, but this is what I had thought I'd need. 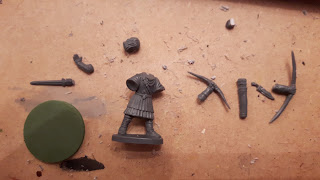 Will's left arm was from the archers sprue. I simply removed the hand and replaced it with a right hand holding a sword from the Theign sprue. This gave me the opportunity to reposition the hand, bringing the tip of the sword in towards the body of the miniature. I feel it gives a more menacing stance.

I found a perfect left arm on the archer's sprue. With minimal repositioning on the join with the torso and the removal of the bow the hand was originally holding, I was able to take a sword from my Late Roman sprue and attach it to the hand. I then fashioned a pommel from an offcut and attached it. This creates a defensive position in keeping with the stance of the torso I chose. 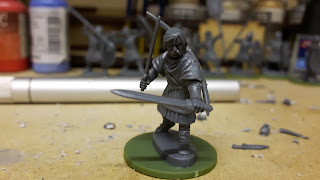 I'm really rather proud of the result! 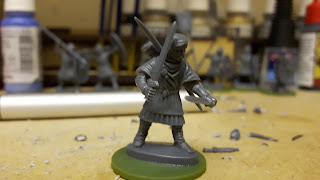 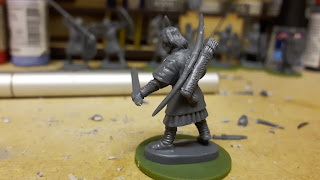 The next step for these will be to apply my base mix. Then they'll be ready for painting.

As always, I hoe this encourages you to have a go at converting your miniatures. Thanks for stopping by!
Labels: Blood Eagle Conquest Games Gripping Beast Richard Carpenter Robin Hood Robin of Sherwood The Ministry of Gentlemanly Warfare