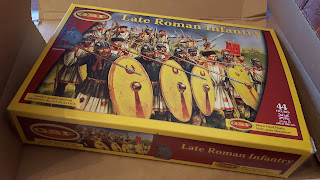 I'm delighted to have been able to treat myself to a box of Gripping Beast Plastics Late Roman Infantry. I'll be using this box to make a British starter force for for Dux Britanniarum.  The box contains 44 miniatures, the exact number you need for this wonderful game from Too Fat Lardies.

However, the box makes 16 unarmoured archers, and you only need 4 to make your harassing skirmishers. I'll be converting the remaining 12 to unarmoured spearmen who will appear among the Numerii and Milites.  The eight armoured spearman will become six Comanipluares leaving the remaining two to become my nobles. The two officer figures will be my Tribune and Champion. And the two standard Bearers will appear among my Milites and Numeri.

I'll blog my progress as I try and make this all translate from theory into practice!
Labels: Dark Ages Wargaming Dux Britanniarum Gripping Beast Plastics Too Fat Lardies