Delighted to have been able to treat myself to a box of Gripping Beast Plastics Late Roman Infantry recently. I'm going be using this box to make a British starter force for Dux Britanniarum. The box contains 44 miniatures, the exact number you need for this wonderful game from Too Fat Lardies. But there is a problem. The box makes 16 unarmoured archers, and you only need 4 to make your harassing skirmishers for Dux Britanniarum. I'll be converting the remaining 12 to unarmoured spearmen who will appear among the Numerii and Milites. The eight armoured spearman will become six Comanipluares leaving the remaining two to become my nobles. The two officer figures will make my Tribune and Champion. And the two standard Bearers will appear among my Milites and Numeri. One will be a musician, the other a standard bearer. The second standard bearer will be converted from one of the extra archers.

What I thought I'd do in this post is show you what I'm talking about with these archers. Here I'm going to turn him into a standard bearer or vexillium to give it the proper name. And I'm going to be using my clippers, scalpel and my tweezers. Oh, and I'm sticking everything together with polystyrene cement. 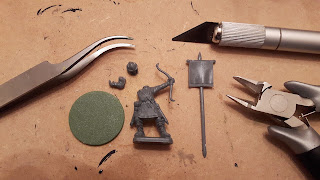 As you can see in the above picture, I've cut from the sprue all the pieces I'll need to convert the archer into a standard bearer.  And of course the base I'm gong to stick him to.  The first thing to do is to remove the bow and the quiver of arrows.  The first is relatively straightforward, cutting above and below the hand.  The second, not so simple.  I started by removing the part of the quiver protruding below the base of the hem of his garment.  I then began removing the rest in stages, making sure that both sides of my clippers would remove too little rather than too much.  It' not about hacking off the quiver, it's about making sure you leave enough to round off the garments. A quiver will flatten the clothes beneath it, so if you cut it away, you'll not leave enough plastic behind and have to build it up with your sculpting putty of choice. 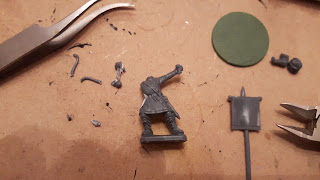 If all goes to plan, you end up with something like this. 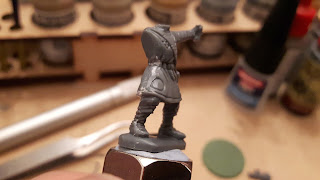 You'll need to do a little bit of shaping around the legs, but plastic is a lot easier to work with than metal, so it's not as hard as you might think. 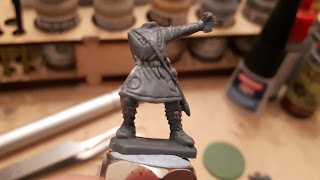 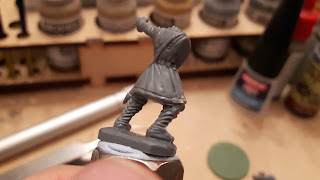 Next comes the standard itself.  Now I'm sure no one will notice if you cut it at a suitable height and be done with it.  However, for the sake of fitting with the other standard bearer who will be assembled normally, I made sure to cut out a middle section where the hand will go.  For your own sanity, please make sure that you put the bottom of the clippers blade facing the bit you'll keep rather than the bit you'll throw away.  As you apply pressure for the cut, the angled part of the blades will put an angle on the bit you're cutting.  Doing it this way will leave your standard with a flat rather then beveled cut.  The former makes it easy to glue it in place.  The latter will leave you with a horrible shaped shaft that won't want to obey gravity and wait for the glue to fasten it into place. 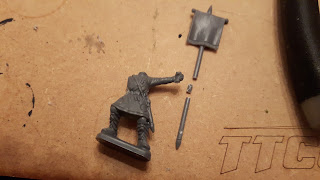 If you look close enough at that picture, you'll see that the piece I'm cutting away is smaller than the remaining part of the archer's hand.  This is simply because I'm going to need to cut away at some of the bow sections.  This next picture hopefully shows how I used my scalpel to cut away the section of the bow coming out of the top of the archer's hand. It left the thumb literally hanging on by a limb.  This is fine when you are using polystyrene cement as a little pressure in the right point will attach and fuse the thumb perfectly. 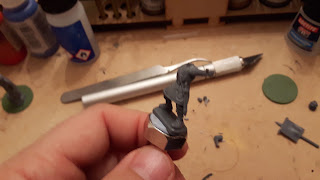 Next comes the brave bit.  Fitting the Standard to the torso.  It takes a steady hand and a bit of patience, but the result gives you a satisfactory glow! 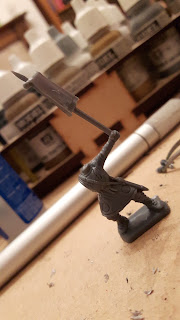 The it's all about making the bottom part attach.  You need to look at it from as many angles as possible, otherwise you end up with a wonky shaft. 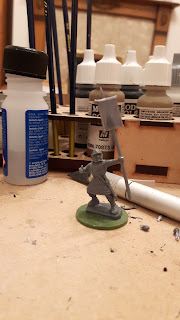 I'm using the right hand from the standard bearer on this archer. I can do this because I'm making one of the standard bearer miniatures into an aeneator.  That's the horn playing musician to normal folks! I'm attaching a shield to this hand as well to finish off my model.

You can see the end result here, as this promoted archer shows off his vexillium beside his aeneator. 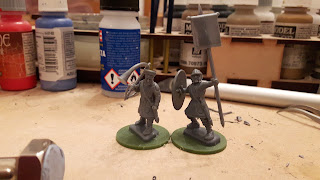 And I managed to do all this on a paint station balanced on my gammy knee accompanied by Corrie, ever faithful Border Collie! 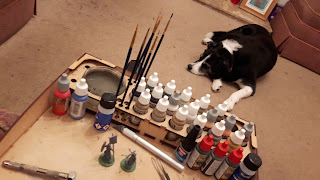 Anyway, I hope these ramblings help encourage you to have a go for yourself. You can pick up this box of miniatures for around £20 depending where you purchase them. And I reckon that's a brilliant price for a starter force for Dux Britanniarum!
Labels: Dux Britanniarum Gripping Beast Plastics Late Roman Infantry Too Fat Lardies