Modern City Base Boards Part One 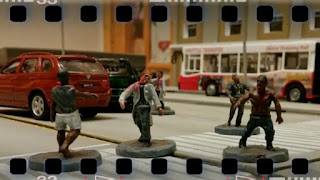 Last time I posted I was at part six of my Building Bavaria project. Since then work and life has gotten int he way of things, like, completely.  as a result, I've had absolutely no time for my hobby at all. This kinda shelved both my scenery making, and put more than just a rain check on my plans to start gaming my WWZ rules.  And just as it began to dawn on me that I would soon have some time again, I realised that I'm about to be playing some games of A Fistful of Kung Fu.  This means that I really need to work on my modern city boards.  So with the holiday weekend upon me, I decided to get to work on the base boards.  Bavaria will have to wait a little longer, I'm afraid.

You may remember that I needed to redo my base boards.  My old ones had warped and no longer sat together without seemingly being repelled by each other.  It wasn't pretty.  So I'd used some birthday money last year to purchase a set of TT Combat's gaming boards. A single set currently costs £34.95 and gives you a 4'x4' gaming surface made of sixteen foot square boards.  With some judicious planning, the modularity this set gives will allow a lot of different layouts.

I had made these boards a number of months ago and put them safely in the loft. 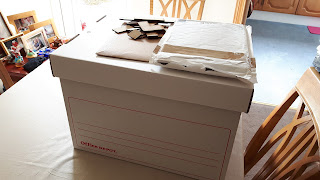 This of course meant a trip to the loft for them. One of the benefits of the TT Combat Gaming Boards is the fact that they pack away into a small space. I have a single set consisting of 16 one foot square boards. They fit very nicely into one of my office depot cardboard boxes. 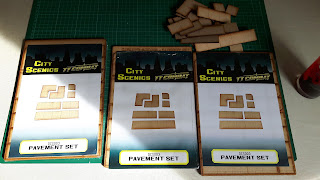 I also took the time to look out my pavement sets. I purchased three sets in the hope it would be enough. Time will tell... 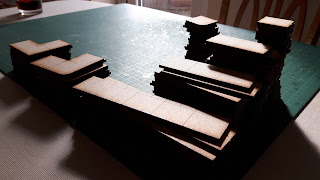 At this point I thought I would have enough space on my dining table to lay out my pavement pieces as well as the boards. How wrong I was. 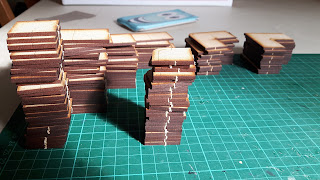 I took them out of their frames and laid them out. 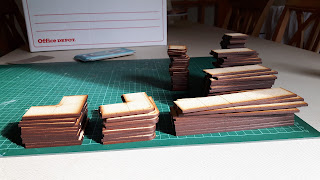 I then spent my time sanding the edges to remove whatever the MDF equivalent of sprue is called. 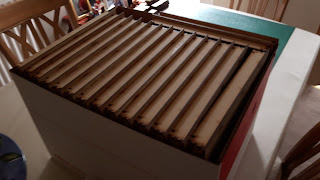 You see, I told you that they fitted nicely into those boxes. 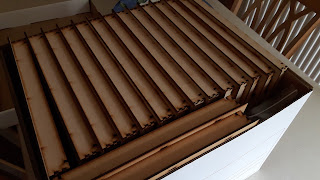 And here's where the plan became unstuck. Be warned. When you go months between parts of a project, you forget what needs done next. In this particular case I assumed I was ready to start painting. But as I began taking them out of the box, I realised I wasn't ready.

I needed to make sure the holes for the side supports were covered.

Of course, if you're going to flock the boards you may not need to do this. But I'm needing the boards to be smooth. So I have to make sure the small gaps at the joints are flush.

This meant getting out my trusty milliput.  I mixed up a small amount and began applying it in very small amounts to the 12 holes on each board. Given that there are sixteen boards, this took a while. 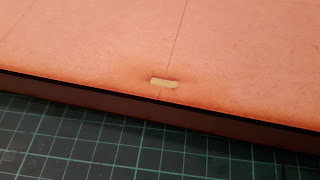 I did manage to make a pretty tower with the boards as I did this. 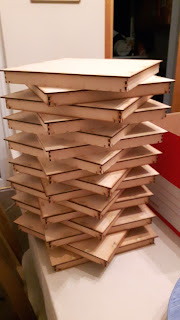 Milliput takes a few hours to dry. So that scuppered my evening plans no end... 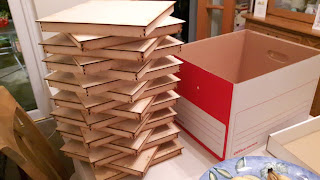 Saturday began with bin bags. Four of them to be exact. After I carefully cut them to lie flat on the... Oh who am I kidding? I couldn't do it. They wouldn't open right. Wasn't a single right angle on the one I did.  It took my lovely wife's handiwork to cut them to lie flat on the table. So all credit goes to Lynne for the view in this next photo. 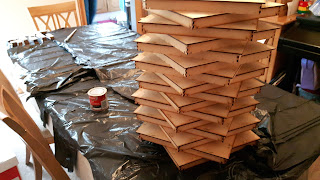 It was at this point we both realised it would have been a lot less bother, and no doubt a lot cheaper to have gone to the Poundstretcher round the corner and purchased one of those plastic tablecloths for a kids birthday party. The joy of hindsight! 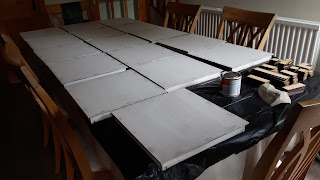 Anyway, I then began sanding the joints to make sure they were truly flush. Then I set about painting the boards. I used an International 3 in 1 Primer, Sealer and Undercoat.

It took time to do the job properly.  I made sure I painted the sides as well as the top. I want to paint these black as I think it will give a nice finish to the boards.

You need to give 4 hours to let the 3 in 1 dry properly. There's no point in rushing and ruining the job. I time this from when I finish the painting rather than from when I start.

Once this time had passed, I set to work painting the  black on the sides of the board.  I'm  using valspar tester pots from B&Q.  They're matt emulsion, can be mixed to pretty much any colour you want and you get plenty for not a lot of money. And if you ask them, they can do you black. Not that you'll find it on their list of ridiculously named colours. I know. I've asked. I'm leaving the edge of the top board as I will paint it the same grey as the boards. Painting it black will make any gaps between the boards look more prominent.

Again, I need to leave the paint four hours to dry. I know it's touch dry in an hour, but I want a proper finish. 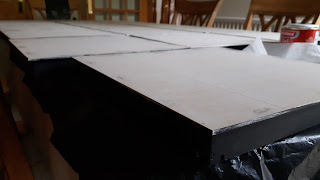 Later this evening I hope to give the sides another coat of black paint. Then tomorrow Jenny can add two coats of grey. When that's dried properly I can begin adding the details to the boards. I suspect that'she where this project will become more interesting....