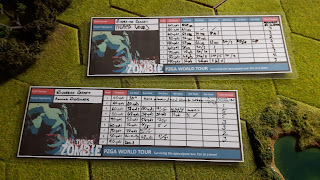 So earlier this week we managed to have a play test of my suggested rules for adding sand traps into our games of Zombie Golf.  You can also see how I went about making the traps here: Making Sand Traps 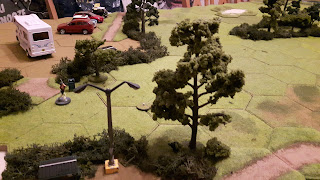 I have to confess that our play test was a lot less play and a lot more conjecturing; a lot less golf and a lot more musing.  It wasn't so much about playing a few holes as it was about tryng to get things right.  It was about ttrying to make the sand traps appear as they would in a real game of golf, a task much harder when you understand we consider golf to be the ruination of a good walk.  To be honest, if it weren't for the Zeds, I doubt we'd have even been attracted to the game.  Which is a crying shame, because we'd have missed out on something wonderful.

To be honest, it was great fun to set up a 90 yard hole (45" on the gaming surface) and see what carnage could happen when sand traps featured.  I had initially place them rather randomly on the board.  But after much talk and consideration, we realized that we needed to be more specific about where to place them.  If we had left them alone, I doubt they'd have caused much bother to us.  We would continue to muse over the exact placements throughout the session.  What we needed the traps to do was to behave as a trap would in an actual game of golf, namely make you do your utmost to avoid them.  There was no point placing them somewhere along the length of the green, because then you'd simply wallop the ball beyond them, and thereby effectively neutralize their threat.  What we needed to do was to try and find the optimum place for them to cause maximum disruption.  But at the same time we had to make sure the players at least stood a chance of avoiding them. 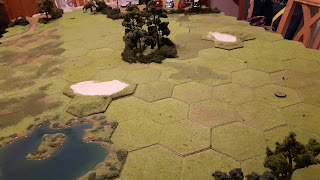 And that is a key part of our desire with them.  We want them to feel like a proper game of golf.  They should add to your head scratching as you try to decide how much power and skill to use with your drive.  You know, because you don't want to land in them. 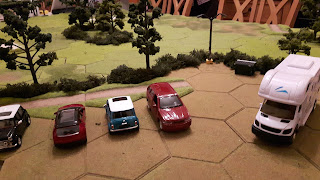 We eventually went for the amended locations as you can see in this next photo: 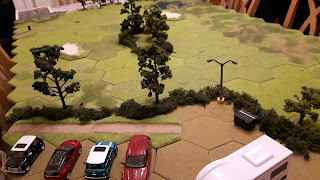 They still look rather worrying though... 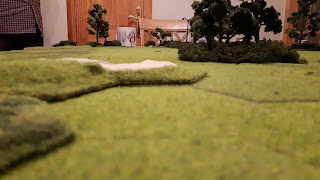 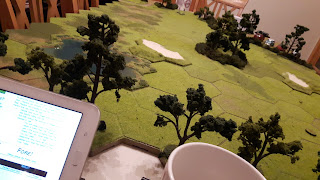 However, we still managed to land one shot fair and square in the trap.  We tried a few different dice rolls to check that the results were sufficiently varied.  The last thing we wanted was a trap you could never get out of, or conversely struggle to find any reason to have one there in the first place.  We eventually decided to increase the area of effect around the edge of the trap from 1" to 2".

The other player managed to avoid the trap.  Whilst this sounded good, it did make the player consider the placement of each shot very carefully.  It might have not gone into the trap, but the effort of avoiding it doing so gave a definite edge to playing the hole.  This, we decided, was definitely a good thing. 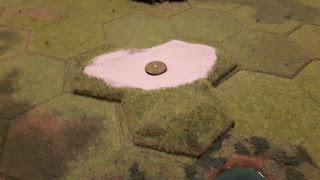 We then had to consider how often the trap should appear over a golf course.  We didn't see the need to have two or one on every hole.  There's no point in overdoing something.  After an interesting conversation involving much measuring and theorizing about different sized holes, we decided to allow a random dice roll to determine how they would appear.

And so, with great pomp and circumstance, I present our revised rules for using sand traps in Zombie Golf.  They will be forming the basis of our next course..

Sand Trap Check
If a ball lands within 2” of a sand trap, there’s a chance it may roll into the trap.  To determine whether this happens or not, use the following procedure:
·         Check to see how many dice passed the FORE! Check which put the ball in this location.  This will be either two, one or none.
·         Roll that many dice against your Rep and consult the SAND TRAP Chart.

If the ball lands in the Sand Trap, count your stroke.  On your next stroke you will need to roll on the OUT OF THE TRAP chart.

Our of the Trap Check
To do this, roll 2D6 versus the character’s Rep and consult the following chart.

Now all you need to do is add some Zeds and get out in the apocalypse for the next round of PZGA! 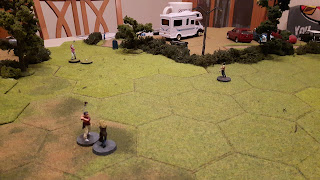