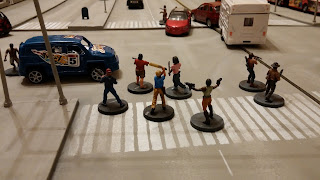 Okay, so you may remember that at about this time two years ago I made myself some modern city boards ahead of launching our All Things Zombie campaign.  It was a project I enjoyed immensely. I've had a lot of very kind and positive comments about them.  And, best of all, I've really enjoyed gaming on them.


But there's a problem with them.  To put it simply, they've warped.  I could blame it on storing them in my loft.  But I don't think that's the cause.  I think they warped because I stuck foam core sheets onto polystyrene boards.  Old boards at that.  And whilst some people could overlook the curvature of the boards, I can't stand the way they go together now. 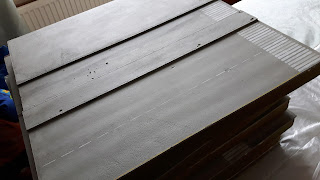 So much so that I decided to throw them out.  I rescued the magnets that affix the lamp posts from them first, but they had to go.  Not an easy thing to do, especially if you have as small a budget as I do.  But by this point, I had a whole new plan for their replacement.

There are a lot of options out there for your base boards.  There are some truly wonderful gaming mats being made these days.  I've not been tempted though as I don't want to game on a flat surface.  I want my pavement to be raised above the level of the road.  But more than that, I want a board with a layout I can change between games.

I play a lot of different games, across both historical and fictional milieu. This leads to the need for a lot of boards. These in turn require a lot of space to store everything in. This, you understand, is not an easy thing. And my journey to find appropriate ways of making, and finding space to store my hobby hasn't been plain sailing. 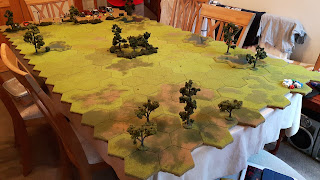 However, I've become a big fan of Kallistra's Hexon terrain boards. Not bad for someone who doesn't even own a single set of hex based wargaming rules. Why do I like them? First, they're incredibly durable. Second, I can flock them and arrange them in a seemingly endless number of combinations. Flock them well and the possibilities become endless. Thirdly, they stack up and occupy a small space. And they do this with enough space between each one for you to go to town with long grass and clump foliage if you wish.

I clearly need something similar and more square to suit my modern city boards. And thankfully that problem has been solved for me. And it's thanks to TT Combat once again. They have produced a gaming surface in 3mm MDF that stacks away very nicely into a single office supplies box. The set comes with connectors and all the right angles fit together like a dream. And you get 4'x4' made of 16 squares for what now retails at £34.95 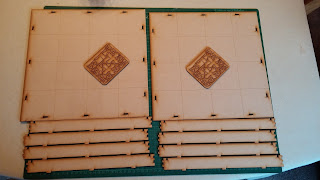 Maybe about now you're wondering why I don't just go and get myself some warp resistant 20mm MDF. Well, basically, it's a question of weight. The TT Combat boards fit into a cardboard box. And I can lift it. Without putting my back out. Lugging my scenery from the loft to the dining room is serious business. 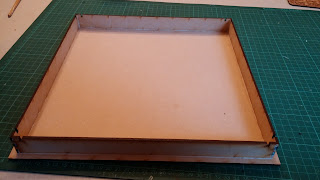 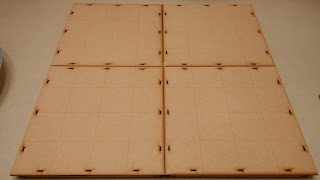 TT Combat also produce a pavement set at £5.95. I'very been able to purchase three sets. And this is where that 3mm depth really comes into its own. You see, rather than sticking them to the base boards, I'm going to paint them and have them loose. This allows me to create a humongous variety of layouts. 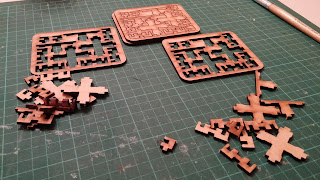 I plan to paint all my base boards the same grey colour. Some will have road markings on them. Some will also have pedestrian crossing game on them. Some will be left the plain grey. Having 16 of them will allow a lot of configuration possibilities. Add to this the loose pavement sections and I guess you can see where I'm going with all this. 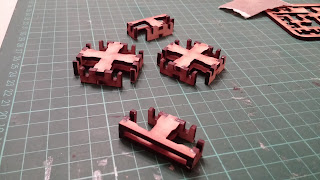 I'll be able to use the boards with all lot of different rules sets. But to alluded to the apocalyptic nature of some of my games, I also have plans afoot for some scatter stuff of my own devising.
And as to buildings, well, if I had the money I'd buy some from TT Combat.  But I don't. So I'll be scratch building them as well. I don'the know if I'll be able to get them to fit in a single box, but I'll certainly give it a go! 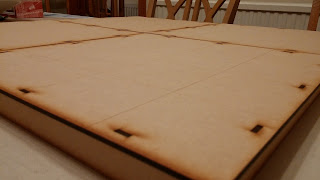 I'very got this project scheduled for right after my Bavarian buildings so I hope to be able to put some in progress posts up next month.