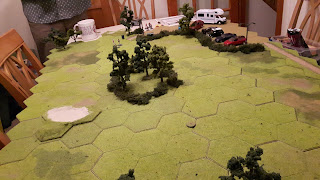 You may have guessed by now that I am a HUGE fan of Two Hour Wargames and the reaction system they use.  It always creates a wonderful narrative game.  And sometimes things happen that you could never foresee, never adequately plan for, let alone know how to deal with when it happens. If you want a god complex to your gaming, THW isn't going to appeal in the slightest.  But to those of us who love the fog of battle; the unexpected to happen before your eyes, and the system to leave you trying your best to solve it, you'd be hard pressed to find its equal.

Take our recent game of Zombie Golf for example.

Our two intrepid golfers, Tigress "Ain't Nobody Taken me Down Yet" Woods and the as yet unproven Jenny Putz arrived at Bootleg Gap, Canada, ready to take on the course and any Zeds that got in their way.  Despite pleas to the contrary from their managers, they chose once again to put their trust in their golf clubs and a revolver each. That and the assurance that running would incur a one stroke penalty as always.

Tigress tee'd off first, and it was a lovely shot which sent the ball 40 yards to the right of the copse of intervening trees that stood between the cup and tee of this 60 yard hole.  I should add that we had used our Sand trap rules and rolled that there would be a single sand trap on this hole.  Tigrss was delighted that her ball landed a safe distance away from the trap.

Jenny decided to take the path to the left of the copse, despite the fact that there was a Zed on the fairway.  her ball landed a respectable 52 yards away and was nicely placed to give her the chance of sinking it into the cup on her second shot.  She boldly stepped forwards and let off two shots at the Zed. This of course had the by now usual effect as she failed her Obviously Dead (OD) rolls.  The noise of her gunshots did however herald the arrival of another Zed just behind the one she had failed to take out. 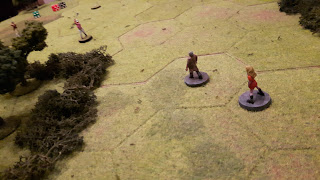 The local spy cam managed to pick up this next aerial shot of the proceedings. 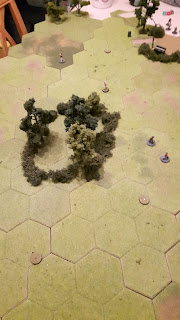 of course, what happened next was textbook reaction System.  Tigress and Jenny kept failing to activate and the Zeds got even closer.  As they were a turn away from being within charge range of Jenny, the dice failed again, and Jenny was charged.  However, her Being Charged Check was a roaring success and she was able to let off two shots before the Zeds closed in.  using the Pop the Weasel rule she managed to kill the first Zed before entering a round of melee with the second.  Thankfully, she was able to knock it to the ground.  At the end of the turn I was about to breathe a sigh of relief, when I realised that I had yet to see if any Zeds were attracted by Jenny's shooting.

And would you believe it, I rolled a 6.  of course, I then had to roll to see where the Zed would appear in relation to the position when I fired the shots.  It was behind me.  Which meant I had caused a Zed to appear within charging distance of Tigress Woods.  Who had her back to the Zed and clearly had no idea it was there. 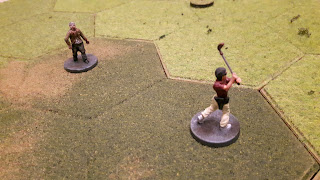 And a slightly wider shot to allow the jy of it all to sink in... 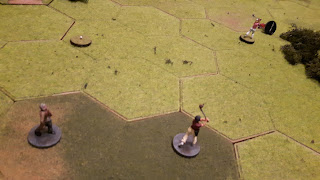 It all hung on the next roll of the activation dice.

Needless to say, the Zeds ended up going first.  Tigress had to take a Being Charged Check.  She passed one dice.  However, the chart says that those charged to flank or rear will runaway.  A Fast Move Test told us she would run 12" towards the nearest building or vehicle within sight.  What Tigress could see was the tour campervan.  So she began running towards it.  That'll be a one stroke penalty then.

It's worth stating that a character who runs away can only be rallied when next activated if there is a friendly model within 2" of them.  There was nothing for it.  Jenny would have to run after her.  That'll be a one stroke penalty for her as well then.  it took another turn of running for jenny to catch up with Tigress at the entrance to the car park. 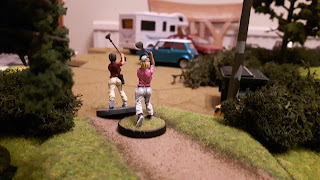 By this time they were well out of reach of the Zeds.  But the fear was still gipping Tigress.  She failed the Rally Check and continued running to the bus. 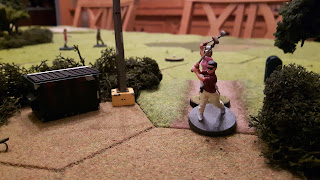 She made it to the camper van and trid to start the engine.  It started up as jenny clambered aboard.  But by this time the noise f the engine was about to attract a load of Zeds.  So she buckled up, managed to calm down Tigress and let her drive away. 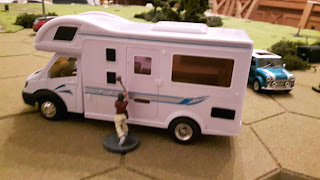 Those balls are still there to this day...! 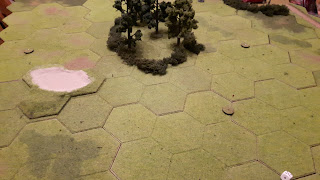 Okay, so this was definitely not the game we had come here to play.  We only managed a single stroke each , not forgetting the three penalties apiece for running.  The match was clearly abandoned with no real golf played at all.  But you know what?  It was a fantastic game to play through as we saw the Zed threat grow and grow.  Every dice roll helped to tell a tale we were glad to be a part of.  And considering we failed utterly, it is perhaps one of my most memorable games.