And It Ends with a Bogey!

Welcome back sport fans to the final stage of our nine hole tour of The Riverside Resort.  If you've missed the previous installments, you can find part one here An Eagle at Last! and part two here Birdies and Bogeys

This was of course an exciting time, because after spending time earlier in the day flocking my remaining boards, I was able to create a 6'x4' gaming surface with them for the first time.  .  This is much, much larger than the 3'x3' recommended in the rules, but hey, Zombie Golf is all about having fun! 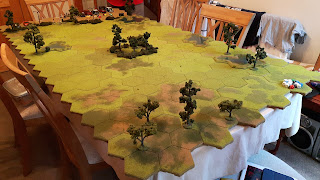 Play began on the seventh hole, a relatively straight 70 yard route from tee to cup.  Once we had rolled for Zeds, we were presented with the following situation. 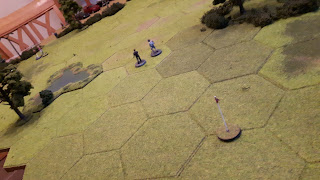 We're up in the top left of that photo, the cup is 70 yards away (or 35" in gamer parlance) and right in the middle between the two.  Yup, you guessed it.  Two Zeds.  Here's a slightly more aerial view to allow that to sink in. 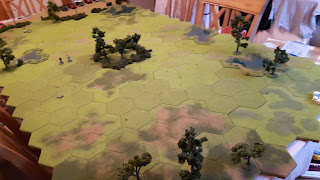 Of course, the downside to having a lovely 6'x4' layout is the lack of space it leaves for the other essentials of gaming.  You know, the tea, the tablet and the reference sheets.  Good job we have the use of the dining room unit.  And note how I kept my better half happy by actually remembering to use a mat for the mugs! 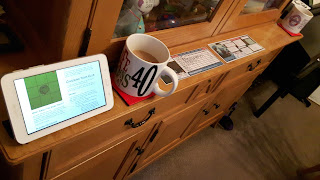 And back to the game. 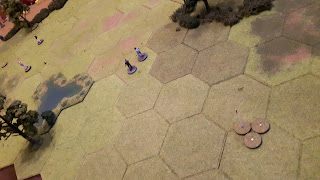 As you cans see in the above photo, both our intrepid golfers managed to hit their balls 72 yards down the fairway on their first strokes.  Not quite sure how that happened, since Tigress and Anikka approached their shots very differently, but there you go.  Such an uncanny knack of getting the ball to g exactly where we wanted it to lulled us into a false sense of security for this hole.  Of course, the dice weren't going to take that lying down.  No siree. And although we both managed to shoot down a single Zed each,  it was Anikka's shot that attracted a Zed, which appeared behind her to the right.  Twelve inches seemed a good distance, until the activation dice stared to go against her as well.  So while Anikka stood around recovering from the shock of seeing more Zeds, the one remaining Zed on the table kept creeping towards her.  Thankfully that pond between them was slowing it down somewhat. 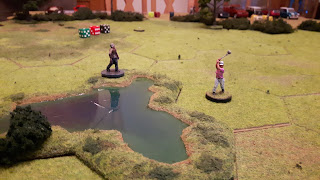 I'm delighted to say that she soon came to her senses and made her way to the green as Tigress played her second shot.  This came up five feet short of the cup.  Biting back her frustrstion she stepped to one side to let Anikka take her second shot.  The ball was lying two feet from the cup.  Anikka took aim, tapped the ball, watched it roll around the lip, and then fall in, landing her a birdie.  Tigress offered her congratulations and proceeded to complete the hole with a third stroke, leaving her on par.

The eighth  hole at the Riverside Resort was a mere 50 yards long.  Of course, the problem with this one was the close proximity of the pond to the green, as you can see in the next photo.  Honestly, you' think we were deliberately trying to make things difficult for ourselves.  As if we would do a thing like that! 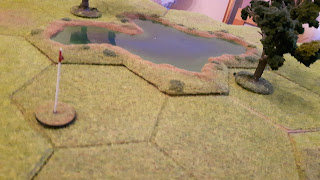 First to tee off was Tigress who launched her ball 40 yards along the fairway.  This left the ball just on the cusp of the green. And once again the activation dice went against me as Anikka once again decided to stand there lining up her shot.  This she continued to do turn after turn, clearly oblivious to that pond-hopping Zed that has been creeping up behind her. 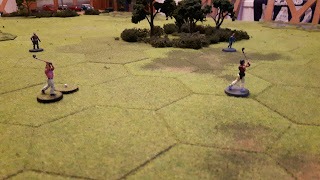 This led to a rather unfortunate moment when the Zed activated and was able to charge Anikka.  And as I am universally detested by any dice, I promptly failed the Being Charged test.  On the plus sde, this meant Anikka let out a scream and legged it away from the imminent danger.  On the down side, running in Zombie Golf incurs a one stroke penalty.

All I can say is I was pleasantly surprised to see her pass her recovery check the following turn.  And with her composure regained, she turned, began walking back to her ball, drew her revolver and blew the Zed's brains out. And the gunfire did not generate any more Zeds, thankfully! Of course, all this time poor Tigress was standing about waiting for Anikka to take her shot, which of course she did.  It landed 48 yards away from where she struck it.  In response, Tigress discovered she needed to pull off an excellent shot as her ball was 25 feet away from the cup.  She failed, pushing the ball only eight feet int he desired direction.  This is how things were looking at the time... 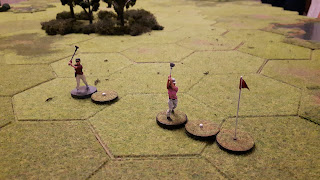 And while Anikka managed to sink the ball in the cup with her second shot, her one stroke penalty ensuring she was on par rather than under it, Tigress was busy proving her aerosol capabilities, falling short of the cup by two feet in her next shot.  Her fourth shot sunk the ball in the cup, giving her the second bogey of her game.

The final hole at the Riverside Resort was a stonking 90 yards in length.  And in true style, the dice generated three Zeds who appeared to the left of the copse of trees.  Clearly the best course of action was to aim our shots down the opposite side of the trees. 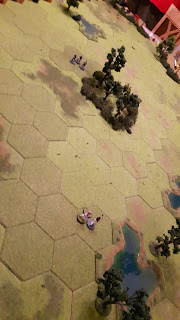 This was the moment that the dice began to show us just how much they hated us.  Or at least Anikka in particular.  Because whilst Tigress managed to land her ball a nicely placed 56 yards in the right direction, Anikka decided to stand around and do nothing.  We couldn't decide what was possessing her, because as Tigress walked down the fairway towards her ball, Anikka did nothing.  Those three Zeds on the other hand were moving their inexorable 6" every turn. 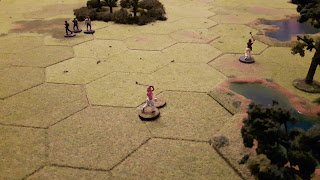 Until it reached this point.  As Anikka realised she had hung around too long, and Tigress was far away down the fairway, well out of revolver range of the Zeds, we had to roll the activation dice, hopeful that Anikka would activate and have the chance to run away.  With death or a one stroke penalty as her two options, she'd choose running every time.

Alas, the dice chose for us.  Twice.  First, the activation dice meant that the Zeds would act before Anikka.  They did what any undead brain-defunct Zombie would do.  That's right, they charged her.  This meant I had to make a Being Charged check.  And would you know it, I duffed up, only passing one dice.  I was gutted.  Anikka would stick around for the melee, but was unable to get to her revolver and fire off some shots first. 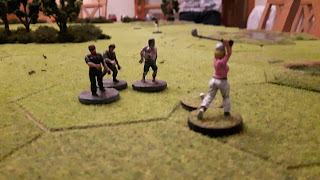 Well, it all went downhill from there, really.  Three Zeds on a single survivor is bad odds whether you're on a golf course or pretty much anywhere else in the apocalypse.  With her trusty iron wielded two-handed against the undead foe, she outranked the Impact of the Zeds by 2 to 1.  This forces the Zeds to fight at -1 Rep, so they needed to roll a 3 or less.  Of course, I should add that a Zed only gets a single attack dice in melee.  In response, a survivor gets two dice.  However, facing three opponents meant that Anikka was fighting with a -2 modifier to her Rep.  This meant she would have to roll a 2 or less on each dice.

There's no way to dress this up or down.  The Zeds scored two hits, Anikka didn't manage to hit any of the Zeds, which is surprising as she had three of the blighters around her.  We needed to check for Obviously Dead result next.  With an Impact of 1, only a roll of 1 would result in OD for Anikka.  I watched the two dice get rolled.  And would you know it?  One of them was a 1.  Who could ever have expected that?  The only consolation for poor Tigress who was helpless and too far away, was the next dice determined that the Zeds would spend the next three turns feasting on the still screaming Anikka. 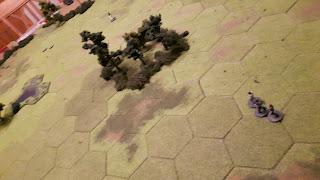 Blotting out the terrifying noises, Tigress decided to finish the hole in Anikka's memory.  I'm sure that made Anikka feel better as the teeth bit deeper and the claws ripped into her as she slipped into the throes of death.

Tigress finished the ninth hole on par before deciding to leg it back to her car and safety.

And there we have it.  The sisters Annika and Anikka Die Gulfer are no more.  The eldest died on the first hole, the youngest on the ninth of the same course.  In the seven holes that were completed by Anikka and Tigress, both ended up with a bogey, one over par for those holes.

What can I say, other than when the apocalypse strikes, playing golf could be just as hazardous to your health as pretty much anywhere else.  Who'd have thunk?

And on that bombshell, thanks for stopping by and goodnight!