The Misadventures of Sir Rupert Utterly-Barkinge

When last we left our intrepid heroes, we'd seen them gobbled up almost to the last man.  Of course, this is decidedly not British, nor is it the done thing.  In fact, come to think of it, there's no way it's possible it could have happened.  Not because of the whole dinosaur thing either, let me tell you!  No, it couldn't have happened.  Not at all!  Because if it had, Sir Rupert clearly couldn't have written his world famous memoirs, the discovery of which led to the creation of this wonderful wargame by Chris Peers.  No!  This wouldn't do!  There was only on thing to do.  That's right!  We applied our "Fudge That!" House Rule and decided yet another reboot was in order.  Good job this wasn't pat of a carefully orchestrated campaign or something...

Oh, and surely this would be the game our dice rolling would improve?

We decided that our BIG Game Hunters had recently set up camp and were looking forwards to some shut eye.  And as they were to find out, there was fat chance of that happening!  It was Goonda who alerted the dozing Sir Rupert to thee sound of large feet approaching their campsite.  Soon all the usual suspects were forming a defensive ring among the tents, their eyes alert in the evening sun. 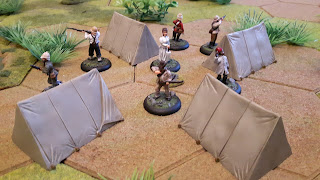 A shuffle of the cards resulted in the arrival of an Allosaurus, and not all that far away from us either. Still, at least we had two turns of shooting at it to avoid anything nasty happening to us. How hard could it be? 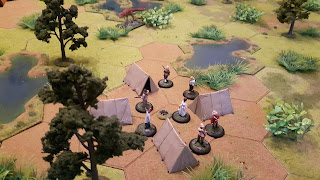 Well as it turned out, it was going to be another one of those games. Our hunters might have been standing about looking the part... 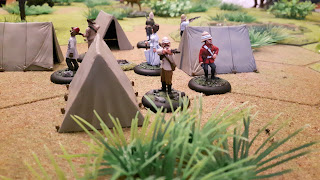 ...but their awareness levels appeared to have plumbed new depths. 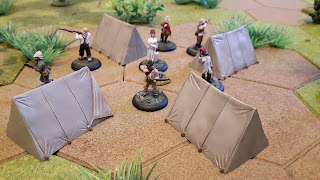 Private Gathering and Sergeant Reynolds stepped forwards. Even Major Payne sensed the threat. Sir Rupert on the other hand stepped away to cover their backs. The Sergeant managed to hit the Allosaurus. Causing half of its remaining damage, his shot stunned the beast. All they had to do was finish it off next turn. Our hunters decided to hold their ground. As they prepared to fire, it was time to check for the appearance of any dinosaurs. This resulted in the arrival of a Parasaurolophus, which is a bit of a mouthful. At least it's a herbivore, and an almost harmless one at that. We randomly determined it's location. Which proved to be somewhat close... 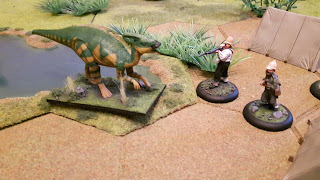 Then we breathed a sigh of relief, for we remembered that a dinosaur cannot appear within its move distance of a Hunter or another dinosaur.  This meant the Parasaurolophus was consigned to the opposite end of the board. 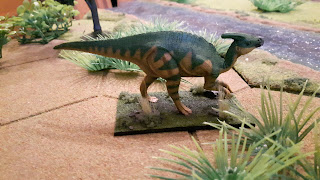 Of course with our inability to roll dice with any chance of success, it took a lot of shots to finally kill the Allosaurus. 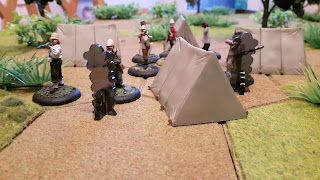 And the Parasaurolophus decided to wander about the other end of the board unhindered by man or Carnosaur.  It was around this time that a single Pachycephalosaurus appeared at the opposite extreme edge of the table. Sadly it exited at the end of the same turn it appeared, so I completely forgot to take a snapshot memento of it. 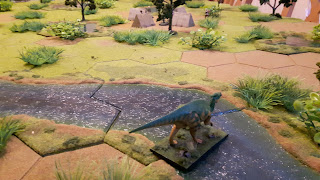 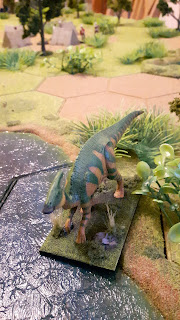 With nothing else appearing, Major Payne decided to step away from the protective circle of the campsite and take a few shots at the Parasaurolophus, determined as he was to have a worthy tropy to adorn his mantlepiece. His shots went wide but eventually proved to be successful. 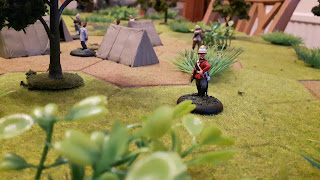 Of course, all this commotion was starting to draw the attention of other dinosaurs. First on the table was a Brontosaurus. Or an Apatosaurus if you week born after 1974... 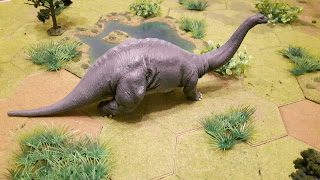 It began lumbering it's way towards the campsite.  By this point we had pretty much decided to have a go at felling the beast, despite how much damage it could take. 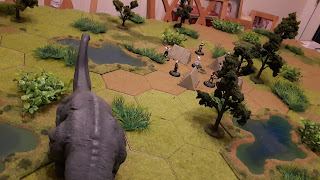 Well it soon became clear that myopia had begun to set in, because with one failed awareness test after another, backed up by an inability to hit such a humongous target in font of them, there was really only one direction that brontosaurus was heading. 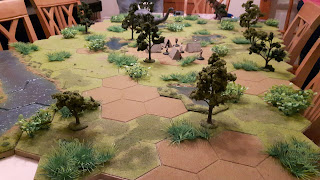 It was at this wonderful moment, when Private Gathering and Lady Constant Ann Oyannce Payne had barely managed to avoid being trampled to death, that Sir Rupert took aim and managed the best shot of the game with a roll o 2%!  Yes!  A direct hit to the brain.  In two turns the Brontosaurus would collapse and die. 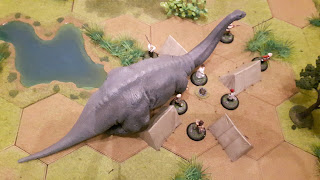 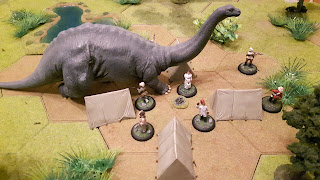 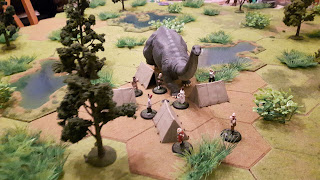 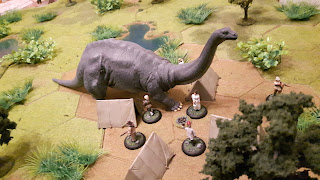 At which point we rolled the dice and discovered a pack of Velociraptors had just appeared on the table edge.  An the Brontosaurus? 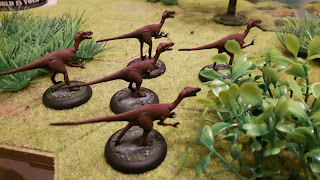 Well, it had stampeded away from the camp site.  Another move would take it off the table.  Before it died.  Denying us the kill.  What joyous rapture. 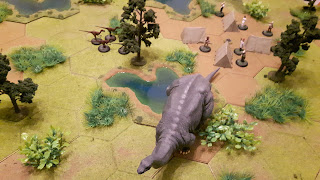 So as the Velociraptors bore down on us, we had to make a difficult choice. 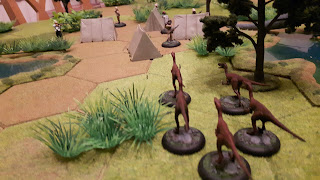 Shoot the Brontosaurus in the hope it would change direction and stay on the table long enough to die and give us the big game bag of the century, or make sure we weren't ripped to pieces by the Velociraptors.

So we did what anyone else would do in these circumstances.

We decided to do both.

Sir Rupert leveled his gun at the Velociraptors and fired off an explosive bullet.  Thankfully it hit its mark, turning the first one into mist.  Using the explosive bullet rule, this also causes similar damage in all dinosaurs within 1" of the target.  That meant three were down and only to left.

Of course, both barrels of Sir Rupert's gun were now empty.  And the Velociraptors were getting terribly close.

Meanwhile, Private gathering managed to get of a shot at the Brontosaurus.  This caused the aforementioned sauropod to charge off.  We were hoping this would be a change of direction.  In true demonstration of our dice rolling, the Brontosaurus decided it was happiest to carry on in the direction it was facing.  Which of course took it off the edge of the table and denied us our prize.  Sigh.

Goonda decided that his Winchester was just the ticket for dispatching the remaining two Velociraptors.  He stood bravely shoulder to shoulder with his master, took aim, failed his Awareness check and managed to do nothing. 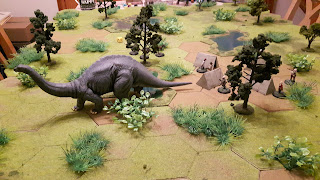 Which led to the very unfortunate situation at the end of that round captured in the shot below. 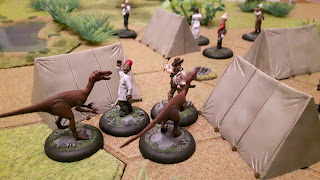 Now, when Velociraptors reach their quarry, the aforementioned quarry has a 30% chance of dispatching them with a lucky revolver shot before they are torn to shreds.  We held our breath and rolled the dice...