A Walk in the Jurassic Park

It was with great joy, and I must admit a little trepidation, that we recently returned for another outing of Dinosaur Hunting with the excellent Saurian Safari game from Chris Peers.  Our intrepid explorers are made by Redoubt Enterprises, the dinosaurs come from Tamiya, Airfix and HLBS and the jungle foliage came from a fake aquatic plants manufacturer half way around the world.  The base boards are Hexon from Kallistra, flocked by myself. 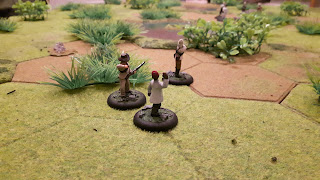 We diced for the arrival points for our two groups.  Sir Rupert, Count Otto Von Wahnbild and Goonda seemed ready for anything.  Major Payne, Lady Constant Ann Oyannce Payne, Sergeant Reynolds and Private Gathring had obviously gone on ahead of them on the other side of the board. 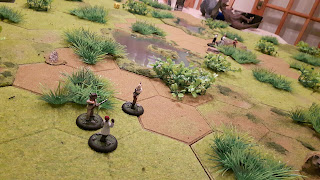 No sooner had we begun than a group of seven Compsognathi appeared directly behind Sir Rupert.  So when it came to trying to spot the little critters, this group would be suffering a cumulative -50% modifier.  You can guess how that one went then... 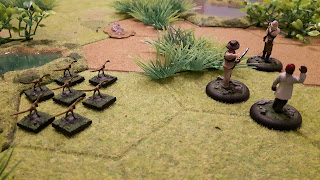 Yup, none of them saw then coming.  And yet soomeow, Sergeant Reynolds managed to spot the movement.  You know from the other side of the board.  He took aim...and completely missed.  Oh well, at least he didn't allow the retort to knock himself over. 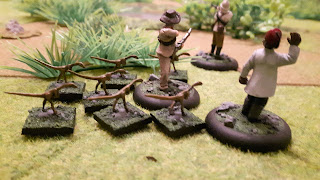 The next moment Sir Rupert was mobbed.  He managed to kick three which scurried off like the prehistoric aggravated chickens that they are. Two more managed to bite him, each bite costing him a point of Strength.  Luckily he has ten to begin with.  And the other two?  Well, he managed to whack them with the butt of his gun, leaving him with two trophies to take home.  Not that they're all that much to look at. 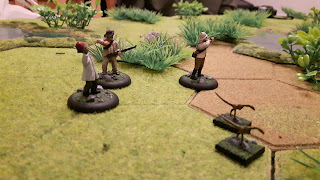 Before our intrepid explorers had time to think, the ground began to shake beneath their feet, heralding the arrival of a Brontosaurus (or an Apatosaurus if you were born after 1974..!) 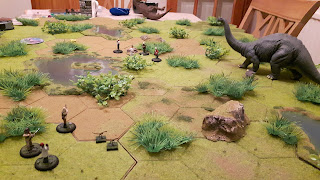 It stood looking about for a moment, while the heroes of our adventure did pretty much the same. 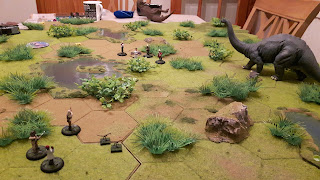 Only Count Otto seemed to have a clue what was going on around him.  He leveled his rifle and blew a single comspognathus to kingdom come.  Which was especially cool because it gave us a chance to try out a new smoke marker from Litko.  Now don't get me wrong, I really like using the cotton wool we've used before.  But these were very nice! 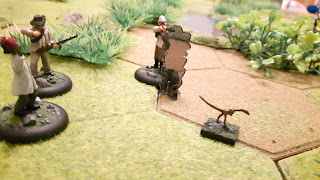 Meanwhile, there was very little happening at the other end of the board.  At least Lady Constant was listening to hr husband and no longer sticking her head in every patch of foliage in the hope of catching an Archaeopteryx. 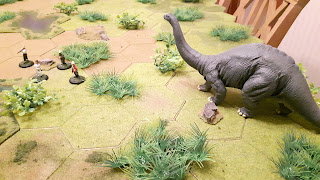 Pte Gathering was the only one able to fire.  Unfortunately his shot bounced off the dinosaur's hide.  Gotta love it when that happens.  Fortunately for us though, the shot caused the Brontosaurus to turn and wander off.  You know, rather than trundle right through the middle of our hunters. 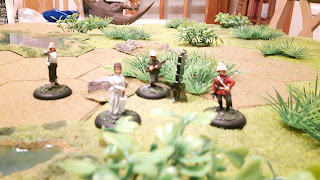 Sir Rupert and Count Otto fired on the large Sauropod.  And because our dice decided once again to detest us, they both missed.  Oh well, at least we can play with those new smoke markers once more! 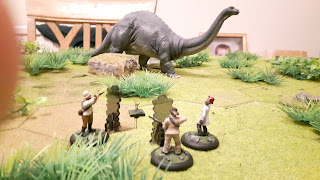 Sir Rupert now busied himself reloading.  meanwhile, the last remaining compsognathus decided to busy itself attacking the Count.  Oh well, at least he managed to get himself a trophy. 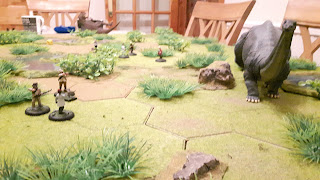 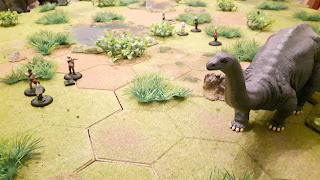 So while the extremely conspicuous sauropod lumbered away unscathed from its encounter with the hunters (how?)... 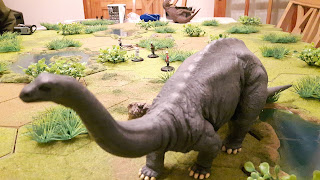 An equally conspicuous T-Rex appeared at the other end of the board. 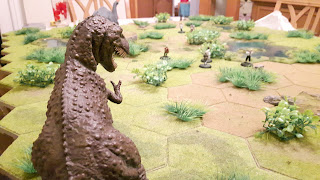 Major Payne quickly spotted the approaching danger, turned, leveled his rifle, fired...and promptly missed.  At least he managed to knock himself off his feet with the concussive force of his shot.  You can see where this is heading, right? 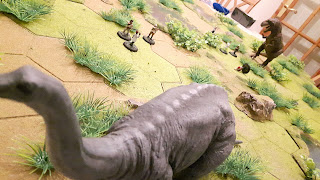 And just when it couldn't get much worse, a Dwarf Allosaurus appeared right between the two groups of hunters. 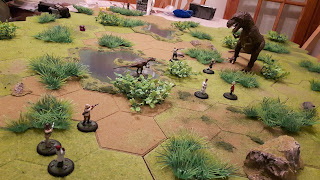 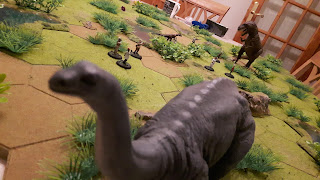 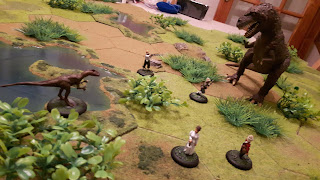 Still, at least Lady Constant managed to run away from the T-Rex. 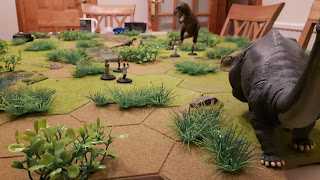 Something the slightly bemused sauropod managed to be doing with ease... 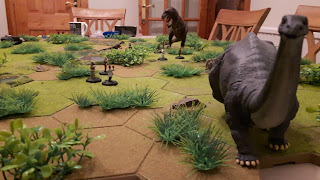 Need less to say, the T-Rex gobbled up Private Gathering. Thankfully, it then exited the board.

And then, next turn, lo and behold a T-Rex appeared, pretty much right where the last one gobbled up Pte Gathering.   We were barely getting over this joyous piece of news (which none of our brave explorers could spot by the way) when the Dwarf Allosaurus ran up to Lady Constant and ate her.  Unlke the T-Rex, it decided to stick around to see what happened next. 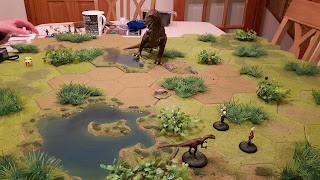 Well, Sir Rupert was about as much use as a trappist monk on valium and couldn't hit the broadside of a barn.  Count Otto dispatched the Dwarf Allosaurus. Goonda proved to be about as useful as a chocolate fireguard. 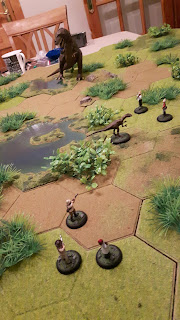 Here's the moment when Sergeant Reynolds was introduced to the T-Rex' jaws. 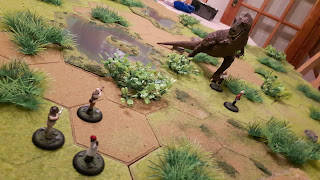 And as we all began to need to reload, you can guess what was about to happen to Major Payne 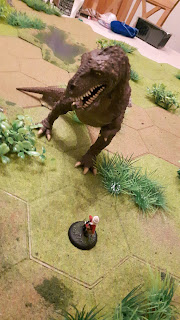 And that was the point we decided to call it quits.

That'll be a page of Sir Rupert's memoirs that never made it to print,then!

All in all, this was an immensely enjoyable game with a heady mixture of joy, panic, chronic dice rolling and incredulity, all wrapped up with a lot of good humour and delight.  I heartily recommend Chris Peers' Saurian Safari.