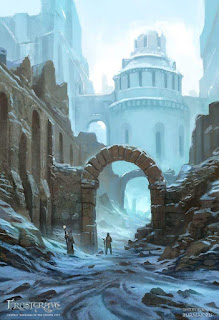 As you may know from reading this blog, I tend to have a lot of ideas floating about my head pertaining to my hobby.  Frostgrave has been one of them.  I've been trying to figure out how to make scenery for this game.  You can read about some if the journey so far here: Whatever Happened to Felstad?

I always like to work from the ground up.  This means I need to have a board that will allow me to make something that looks like its wreathed in snow.  Simply adding in a few snow drifts on some generic base boards wasn't sitting comfortably with me.  No, I need a different approach.  This clearly meant I needed to make some snow covered boards.

This of course is much more difficult when I need to do it with a serious lack of funds.  And then I had one of those 'last-day-of-the-holidays-oh-why-didn't-I-think-of-this-sooner' moments. I remembered some boards I made many years ago.  I knew there were two boards I never completed.  Perhaps I could dig them out of the loft and see what could be done.  So I did.  And here's the first one I decided to work on. 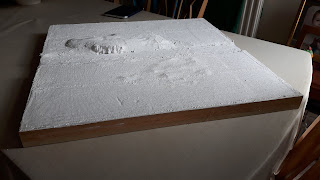 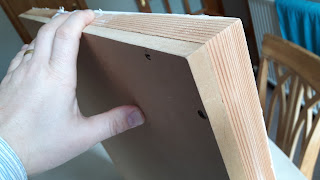 The boards were 2'x2' square. The base board is made of 15mm MDF and is edged with a 1" x 1/2" piece of wood mitred at the corners.  These edges are attached with glue and screw.  You know, because glue and screw won't undo.

I'd made this board to have a river.  The boards were filled with polystyrene, from back in the day when everything was packed in the stuff.  I then added plaster impregnated cloth to make a solid surface.  I also sculpted a small rise and used a Woodland Scenics rock mould to add to the bank. 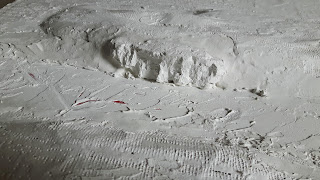 Of course, making these boards allowed me to literally dig into the ground level for the river.  This is a much more natural look than can be achieved with drop on scenery.  Unfortunately, it does tend to reduce the board to a single use.  I had found this to be the case with the other board and thus had abandoned the project.

In fact, you can see my initial ambition for the depth of the river in the next shot.  I seem to recall I had planned to build up the riverbed and use resin to model the river.  Of course, when I realised how much that would cost me, well, that was the end of that.  So I filled up the larger part of the space and added in a layer of foamcore to raise the bed.  I think it was this relaisation that made me shelve my plans for the board. 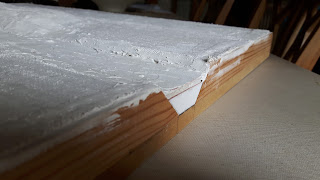 Still, one day's folly can always be turned into another's opportunity.  Perhaps Frostgrave could benfit from this old abandoned project. So I decided to have a go anyway as there was little to lose.  First things first, I needed to remove the plaster impregnated cloth.  This is a very messy business, and I decided to take advantage of the best weather all holiday and go outside. 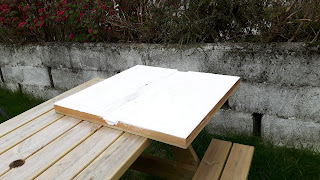 Once I had started this process, I soon realised that the rise had been built up with rolled up pieces of newspaper stuck down with masking tape.  Reminds me of making model railway scenery. 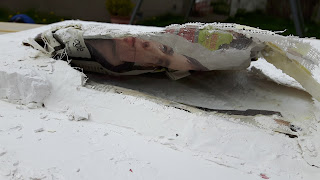 Anyway, once I had removed the mini mound and the plaster cloth, I was left with the following: 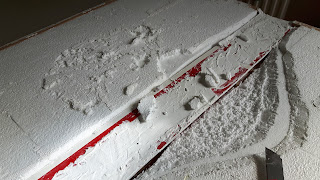 It was going to be a bit of a chore to decide what to do with what I had. 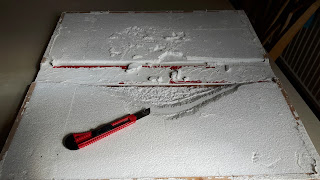 I decided to pull off as much as I could of the top level of polystyrene.  I need to keep the edges flush with the height of the wooden supports as this is where the board will meet the other(s).  I would keep this the height of the snow drifts and allow me to go a little lower inside the board.  I don't want to build above the height of the edging as experience has proven how hard it can be to stack such boards.

As much as I want to be as realistic as possible, I need to have a number of level areas onto which I can place all the ruined scenery I still have to make.  I also had to decide what to do with the large recess you can see in the first half of the photo above.  I decided to cut it out and take real advantage of the opportunity to add different levels to the board.  This again was a very messy process.  Polystyrene balls were going to go everywhere.  So I did this outside.  When I came back inside, this is what I was left with. 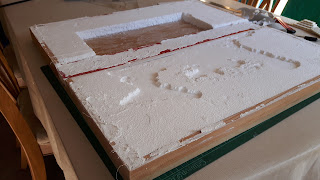 I then began to make the stone walls that would fit inside from foam core.  I cut out the necessary lengths and remove the card from one side before measuring out the brickwork pattern. 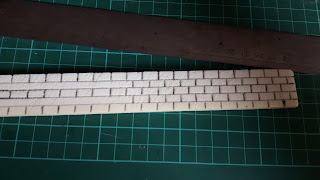 When this was done, I stuck the pieces in place, adding a flight of stairs. 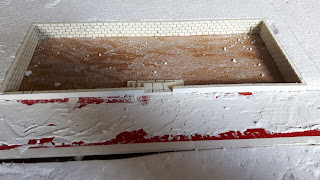 My plan is to make the old riverbed into a road. 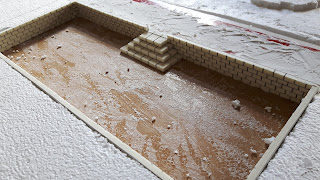 And of course this was the end of my available time.  Sigh.  I was really enjoying getting back to scratch building once again.

Next time: adding the paving!

I do hope my ramblings have made sense.  As always, thanks for stopping by!