I've been thinking about making scenery for a number of projects since the new year began.  And as I like them all, and clearly can't decide for myself which to begin first, I created one of those poll thingies over on G+.  I'm pleasantly surprised to see the Spanish Peninsular taking the clear lead so far.   And since most news corporations are only too happy to follow suit and start predicting stuff that never happens, I thought I'd do the same and go and look out some buildings I made for this very project back in the summer of 2008. At that time I'd decided to take the plunge and have a go at making scenery properly.  Much of my war gaming scenery had until this point been the usual mix of trees, hills and lichen scattered over green flocked base boards.  And that's pretty much how I'd approached my scenery to this point.  I suspect the reasoning behind this had simply been the lack of variety of war games I had been playing until that time.  Pretty much every game and period I played had only really required grassy countryside to fight on.

But as I moved into more games and more periods, and more skirmish scale gaming, I realised I wanted to make some specific terrain for each game I played.  And when I say some, I clearly mean lots.  Just take a look at this in-progress photo from my Town with No Name project. 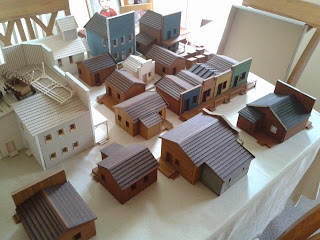 Anyhoo, here's the Spanish Peninsular buildings I made earlier... 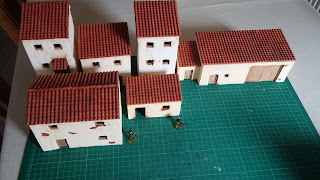 As with all my builds, they began as foam core shells.  The miniatures featured below are from the excellent Perry twins.  Truth be told, they are from Nassau Contingent 1815, NN13 Volunteer Jager Company, skirmishing.  And yes, I was planning to use 1815 uniforms in Spain in 1812.  And to fess up completely, yes, I had painted them as 95th Rifles.  At that time you see Perry was only making Napoleonics for the Hundred Days.  Nor had they made any British forces at that time.  These were the closest dressed miniatures I could find at the time.  So my apologies to any purists reading this who are turning premature cartwheels in their graves.  Perry have continued to increase their excellent range.  So rest assured.  I'm using Perry 95th plastics for my Rifles.  And yes, I am aware they're for 1815 as well.  Just turn in your graves once again, purists!  Honestly, can you see now why I've been so frightened to get on with my much loved Napoleonics!?!?! 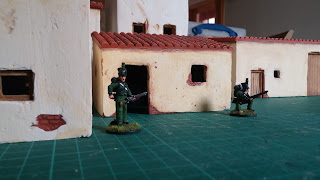 And back on track!  I used match sticks to make the window frames, inserting them into the foam core before assembling the buildings.  The buildings were then glued together.  As you can see from the next photo I had simply butted the pieces of foam core together.  I remember using pins to hold the pieces in place. 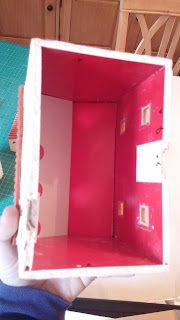 The buildings were then sized with PVA and a little water.  When thoroughly dry, I coated the outsides of the buildings with a thick poly filler paste.  I always buy the powder form and mix it myself.  It goes on a little lumpy, but that's alright.  Once this was properly dry, I lightly sanded the buildings using vertical strokes up and down the buildings.  After that I took a dental probe.  Where I found natural recesses in the plaster, I carefully scribed out some bricks. 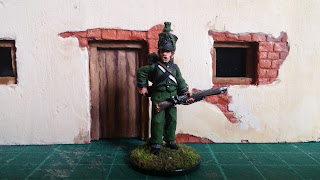 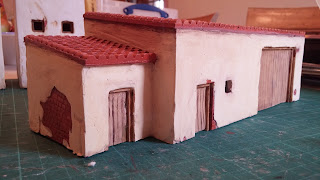 I've only ever purchased two Hirst Arts Moulds.  One of them is their pan tiled roof set.  Although the moulds are expensive to buy and ship over the pond to Scotland, they are well worth it.  You can see that I have put the mould to good use on these buildings!  As usual, the roofs are supported with my go-to material of choice...cereal packet card! 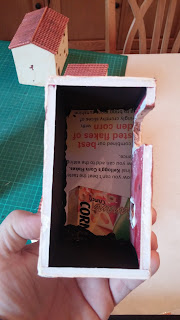 Of course, once all this is done, the painting begins.  I used some cheap acrylic paints from an art supplies store. 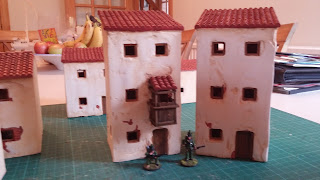 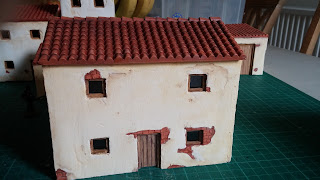 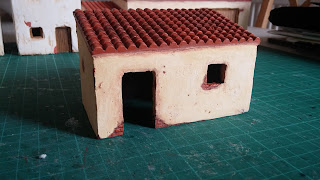 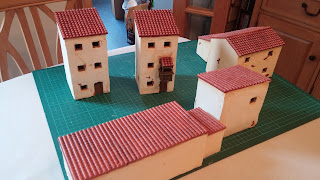 I should add the balcony was made entirely from trusty match sticksglued together with my trusty UHU. 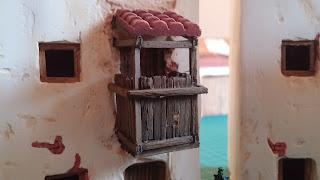 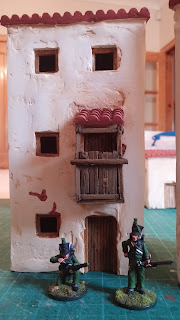 Looking at them now, I'm proud of what I achieved.  However, there are a few things I've probably learned to do differently since these builds.  So the next lot I make will probably be as much of an experiment as these were!  Of course, this does all mean that my chances of actually gaming Napoleonics is getting a lot closer! 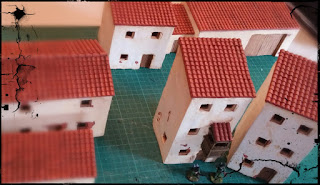 As always, thanks for stopping by and reading my ramblings!