Iron Mammoth's Studio to the Rescue!

If you've been following this blog and my collections on Google+, it won't come as any surprise to you that I'm needing a lot more gaming surfaces for all the game systems I hope to play in the years ahead.  And I say years, because that's how long it takes me to paint enough miniatures and make suitable terrain. And whilst I'm about to embark on a series of Jurassic wargames (namely Eat Hitler! and Saurian Safari) that no means I turn my attention to our next system in the bucket list, namely In Her Majesty's Name. 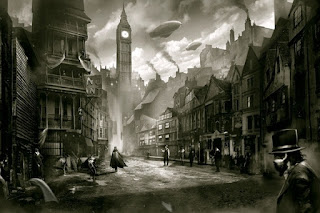 And for that, I need a serious amount of cobblestones.  Three square foot of them to be precise.

I'm using the excellent TT Combat gaming boards as my new go-to choice of boards for my gaming. You get sixteen foot square boards for £29.99, which is a fantastic price.  So, armed with these, I began to muse how to go about making all those cobblestones.  Obviously, whatever I did had to fit on the base boards without adding a lot of extra height.  This is because they will be put alongside other boards with different terrain on them, and I don't want my drop on scenery lying at funny angles.

For that reason alone, foamcore was out of the question.  After all, I want something that is going to last for many years.  I looked into getting some embossed plastic sheet.  At which point I realised it would cost a lot of money to cover nine square feet.  So I ditched that idea too.  Now, I'd heard a lot of talk over the years about using textured wallpaper.  And I'd heard all about the Anaglypta and Super Fresco ranges.  So I went searching.  And although I found these brands, I can say with certainty that there aren't any that look even remotely like cobblestones in Aberdeen.

So I did what anyone would do.  I went out and purchased a load of milliput and had a go at scribing it with cobblestones.  It went so badly I refused to photograph the results.  Seriously.  It was that bad.

And then, just at the point I was planning to get some of my trusty cereal packets, cu them into little rectangles and begin gluing them onto the base boards, some magic happened.

David Drage heard of my troubles and offered to have a go at making some cobblestone boards on a laser cutter.  I know, awesome stuff right?  Now, I didn't expect anything to happen soon.  After all, he has enough projects of his own on the go, let alone a day job to be on with.

But within a fortnight, look at what I received! 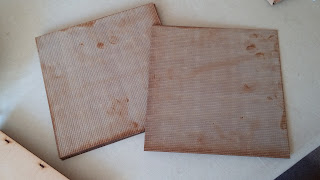 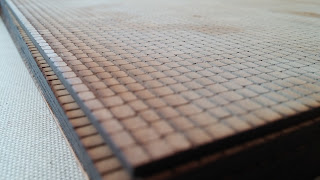 Yup, nine boards covered in cobblestones.  They are absolutely jaw-droppingly awesome.  So much better than anything I could make.  Have a closer look. 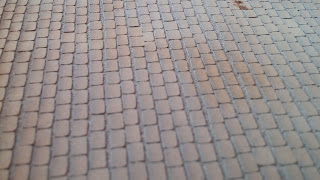 See what I mean?  Here's a couple of shots of them resting on a TT Combat base boards. 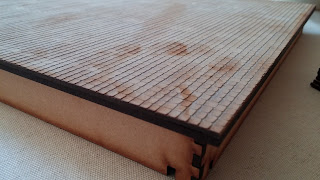 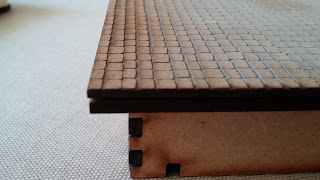 I'll post more pictures when I've got them all glued on and painted.  You're going to see a lot of these boards in future games.