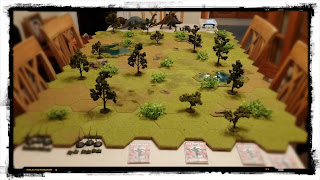 Last night saw our first game of Eat Hilter!.  Well, two actually.  But I forgot to take many pictures of the second game as we were having too much fun by then!

Eat Hitler is a simple wargame from Pulp Action Library.  At only eleven pages in length, you'd be forgiven for thinking it's a little light on content.  And compared to the detailed reactions of dinosaurs in Saurian Safari, you may think it's got little to offer beyond the wonderful novelty of the subject matter.  After all, who wouldn't want to play a game where the Nazi elite are the main course for a bunch of hungry carnosaurs!

But with two game sunder our belt, I can say with some authority that Eat Hitler! has a great deal of tactical value far beyond the written page of the rules. 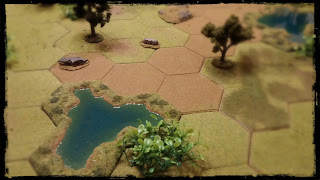 A player picks a carnosaur or group of smaller carnosaurs and sets them up on a table edge.  The time machine is placed in the middle of the board and the Nazi leaders (in our case Hitler, Eva, Goring and Bormann) and some Waffen SS guards (four in our case) are placed anywhere within 12".  Then any herbivores are placed on the table.  After that, the fun begins! 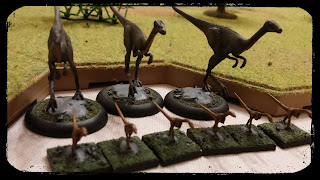 Play order is determined by an activation deck containing a card for each player and a Joker.  When the latter is drawn from th deck the turn ends. 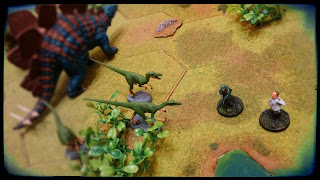 What impressed us most was how busy the table looked with all the dinosaurs on the table.  You simply don't have so many on the table at the same time in Saurian Safari.  And seeing Goring and Hitler surrounded by so many dinosaurs is guaranteed to make you smile. 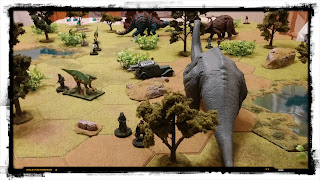 On your turn you roll the number of dice specified for your carnosaur and move it towards the nearest Nazi.  If you reach an aforementioned Nazi you gobble him up.  Unless it's Goring.  He's so fat it takes two turns to eat him up.  If any herbivores are within 12" of your carnosaur, they move away from them.  Not so easy when there's so many carnosaurs on the table! 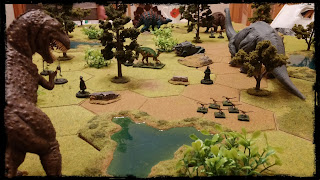 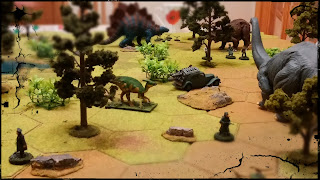 Of course, all this leads to a lot of movement on the table, and constant thinking and rethinking about how to hamper your opponents.  We loved it!  Of course, this makes it hard to remember every movement, let alone to take a photo when each piece of drama unfolds.  So instead of being able to present you with a blow by blow account, here's some of the most memorable moments of last night's game.

First up, the first Waffen-SS Guard to fall prey to my Utahraptors. 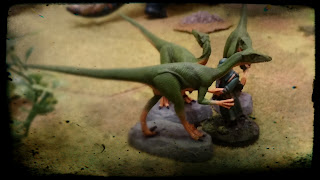 I got so excited to claim first blood, I completely forgot this meant that I could do nothing more this turn.  This meant that I was unable to block the advances of those pesky Velociraptors (all six of them)!  They managed the coup de main and encircled Adolf.  Of course, you have to roll1D6 when you attempt to eat Hitler.  On a 1 the carnosaurs spit him out, because evil tastes bad!  That didn't happen last night though.  Hitler got his well-deserved comeuppance!  You'll notice how close they are to Goring... 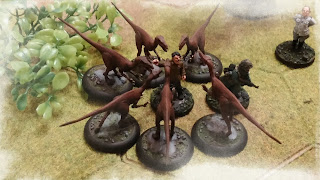 Then a Dwarf Allosaur got close and personal with another member of the SS.  It didn't end well.  For the SS man, that is! 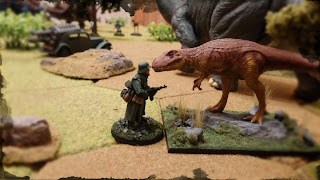 Oh, and the further dashings about of those Utahraptors made a group of three Galimmimuses stampede right past the time machine.  And because this was within 1" of a human, we had to roll on the Herbivore vs Nazi table.  Poor Eva was trampled to death in the process. 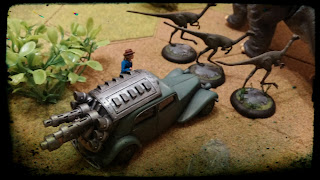 And then the Velociraptors circled around Goring and began eating him.  It would take two turns to do so, of course... 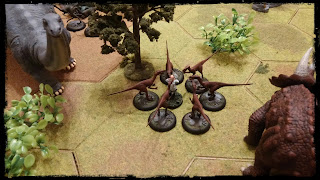 Thankfully, the Dwarf Allosaurus moved about and ate nothing.  Which meant the herbivores could be moved.  And an Apatosaurus can stamp over anything in its path.  A roll on that Herbivore vs Nazi table meant it squished Goring as flat as a pancake.  Which denied the velociraptors the kill.  The T-Rex then munched up Bormann, who didn't escape this time. 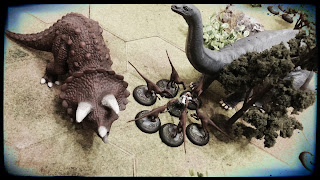 And here's a photo from the second game.  The remaining Waffen-SS and Goring manage to get back to the time machine before it returned to 1945.  Unfortunately for them, the Dwarf Allosaurus reached the car, successfully ripped open the roof and munched the first ever tinned meal! 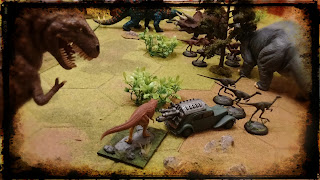 Eat Hitler! is a wonderful way to fill a table with some great miniatures and enjoy a great evening's wargaming. With a cheesy grin on your face the whole time!

Base boards from Hexon Terrain, flocked by myself with Woodland Scenics.  Dinosaurs from The Honurable Lead Boiler Suit Company, Tamiya and Airfix.  Nazis converted from Artizan Designs' Thrilling Tales and Late WWII ranges.  trees from Woodland Scenics.  Vegetation from an aquatic supplier in Hong Kong.  Cards designed by myself.  Eat Hitler! by Pulp action Library.