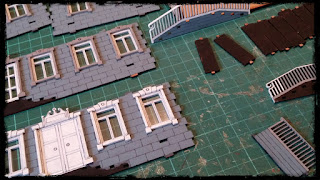 You can find the first part of this build here: Part One

Let me begin with an apology.  I had hoped to be able to make part two all about the completed ground floor of the Chateau.  Despite grabbing time where possible over the course of this last week to work on the kit, I've still got a lot of painting ahead to me to get the ground floor ready to assemble.

I began by painting the interior of the ground floor.  As it's raised above the ground height of the building, it seemed only logical to make it a wooden floor.  So I armed myself with some watered down acrylic brown paint and a large brush with thicker bristles and set to work.  Keeping my brush strokes in the same direction, and painting different sections at different time, some receiving more layers than others, I was able to create a wood grain effect on the mdf.  I'm really happy with the result. 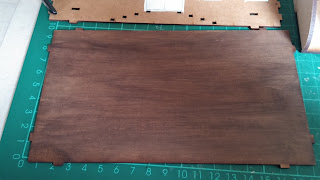 Then i set about painting the interior window frames on the perspex I'm using for the windows.  This is incredibly time consuming.  Two coats meant this was done twice, with sufficient drying time in between. 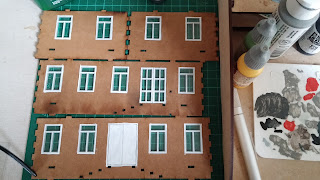 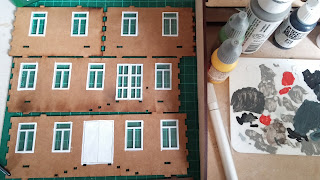 Then, because I was grabbing an hour here and there, I began work on the brickwork. 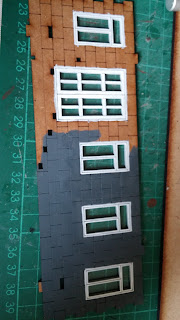 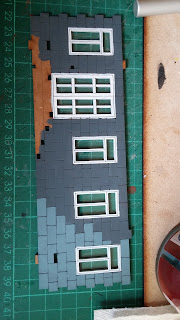 With that done, I decided to paint the interior of the walls.  My colour of choice was Almond.  You can see it's one of those acrylic pots I purchased a while ago from an art store rather than using up most of a pot of Vallejo.  Unfortunately, this one was a bit of a pest to get decent coverage with.  It's at times like this I wish I had enough money to just use Vallejo. 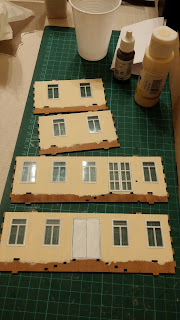 But after four coats, I was finally happy with the coverage. 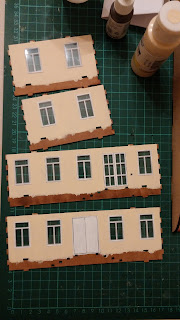 I then turned my attention to the window frames.  These are pretty much th reason I went for this kit rather than try to make them myself.  They are lovely.  But they are fiddly and brittle too.  I gave them a coat of size, and realised my mistake.  I should have stuck them onto the walls before I began painting.  They are just too darn fiddly to be able to paint them separately as I had initially hoped.

Could I have foreseen this?  Possibly.  If I'd taken the whole kit off the frame before I began construction.  But I didn't do this because i don't have a dedicated workstation.  As with many people blessed with family and without the means to purchase a mansion, I have to do all my hobby stuff on the dining table.  I'm very blessed to have a very encouraging and understanding wife.  But I dare not take the whole kit off the frame for fear of losing parts. 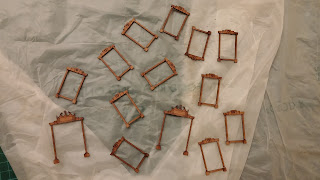 So I set about sticking them onto the walls. 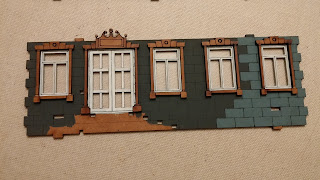 They look lovely, don't they? 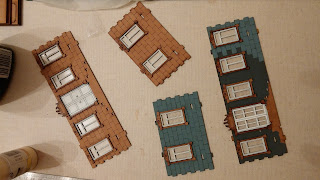 And at the same 2mm thickness as the rest of the parts, they don't don't look too chunky. 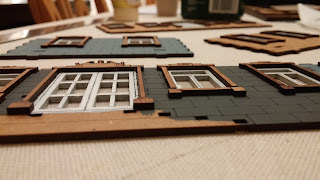 It was at this point I decided to size the steps at the front and back of the chateau. 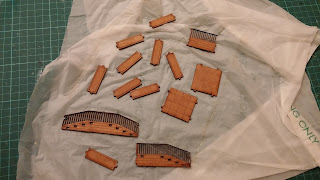 These are wonderfully done.  But i expected them to cause a little consternation when it came to painting them. 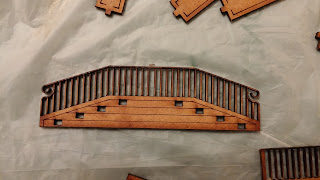 I then tried one of my dry fits.  At which point I noticed a little inconsistency.  Namely at the back patio doors.  That skirting piece at the bottom of the doorpost on the left to be precise. 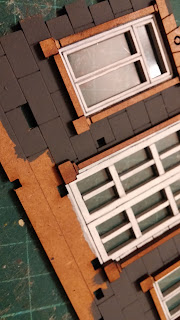 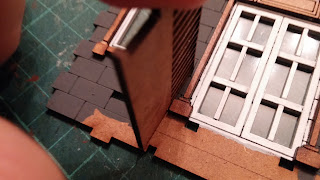 So I had no option but to cut off a small section. 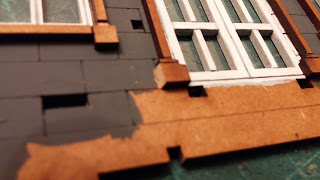 And then, hey presto!  It fits! 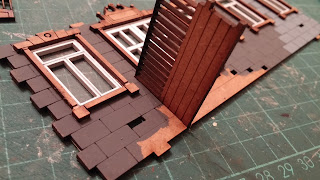 Not the most difficult thing to resolve, but a bit annoying none the less.  Just like the mistake they made with the brickwork pattern cutting across the patio door frame as you can see in the next photo.  Sloppy. 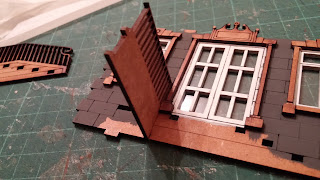 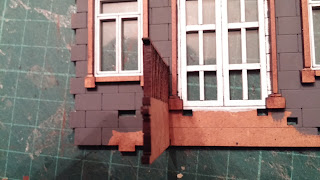 Oh and another gripe while I'm at it.  The're going to be a small gap between the steps as well.  Personally, I don't see the need for this at all.  but I did see the need to make the interior section of the steps as dark as possible to avoid daylight making a mockery of the stairs.  So I set to work on painting the reverse of all sections black. 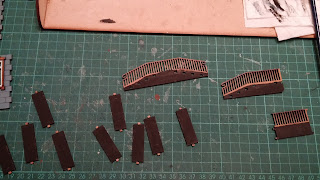 And then all the window frames began calling out to get a grey undercoat. 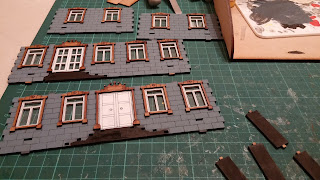 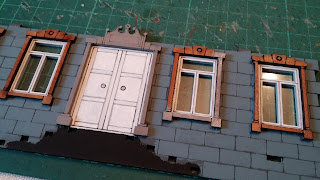 And then I began the laborious task of painting them white.  Two coats of course.  I want it to look good, after all. 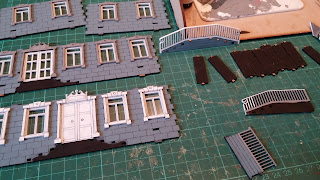 And this, I'm afraid, is as far as i managed to get in a week!  Hopefully the next time I post I'll have those windows and stairs sections finally finished and assembled!
Labels: 28mm wargames scenery Chateau In Her Majesty's Name Sarissa Precision