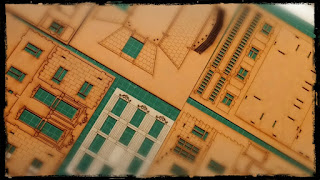 As my plans go into overdrive for our upcoming In Her Majesty's Name campaign, I decided it was high time I set to work on Sarissa Precision's Château.  It's a great little kit with a load of incredible detail and I'm delighted to have received this one for my birthday last year.  Now I know I could have a go at scratch building this myself, but with the level of detail on it, particularly the window frames, and the fact that it comes apart to allow you to game inside, I obviously went on about it long enough to receive it as a present. 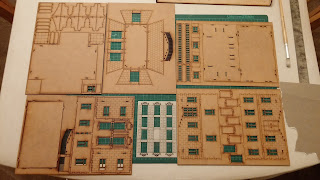 As you can see, you do get a lot of stuff.  However, it's not as big as I imagined it would be.  Once it's done I'll have to take photos with other kits as a size comparison.

If you're coming to this Sarissa Precision kit after working on TT Combat kits like I am, you're going to notice a significant difference.  Sarissa kits are made from 2mm MDF.  TT Combat uses 3mm MDF.  Which means that with TT Combat, you don't get the bendy effect you can see below 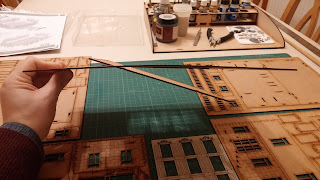 Thickness aside, I do have to say the detail is incredible.  No more than what I've seen on TT Combat, but there is one difference.  Sarissa's stuff is less 'chunky' for want of a better word.  By this, I mean the windows and doors are narrower.  This is probably because TT are designing their models for Batman in particular, which is a heroic 32mm game.  However, Sarissa's measurements are definitely a good thing.  It's also quite nice to get out the ruler and discover the height of each floor, the positioning of the windows and doors is exactly the same measurements I have been using for years in my own scratch built scenery.  But I would have still expectd the building to have been a bit bigger.

And so to the windows.  Which I clearly can't leave alone.  You see, I like to add some clear plastic to my windows.  I know this may seem superfluous, but I like the reflection.  But this of course presents a problem.  Why?  Well because you can get inside this model.  Which is not something I usually have to worry about on my own scratch built foamcore buildings.  This conundrum is the sole cause of procrastination on my finishing my TT Combat Police Station you understand.  Well, that and the need to work on Victorian stuff for IHMN that is.

Now, I can't do the logical thing, which is to insert the perspex sheet between the wall and the window frame.  It' be the simple thing to do.  But it would be wrong.  You can't have a reflective glass surface in front of the window frames.  This of course means it will have to go on the inside of the building.  Hmmm...  Anyway, here's a photo of my perspex for the windows.  Now, you can buy this stuff from all good art and hobby stores.  But I didn't.  You can clearly see it was rescued from some packaging from a Christmas gift.  No point in throwing money away now, is there? 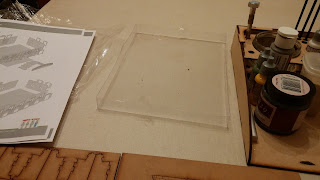 Looking at the kit, it was quickly apparent that I would need to work on the building one floor at a time, and that I would be best to asssemble and paint as I went along. Sometimes it's too late to paint parts after gluing them together. You simply can't get the brush to them. With this in mind, I began the delightful task of removing the parts I needed from the sheets of MDF. This was a much easier job with this Sarissa kit compared to TT Combat kits. In fact, I struggled to find where they had been attached. This meant there was virtually no sanding required at all.

Now I like to have a dry fit to see how everything goes together. This proved more difficult than expected. See what I mean...? 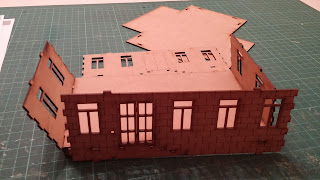 This is why. There's simply too much give in the insertion holes. TT Combat kits aren't like that at all. They provide a much tighter fit. At the end of the day, it's hardly anything to moan about. I assume this extra leeway will help with any fiddly assembly. Its just that when I make a building, I remember being told by my father in law (who was a ship's joiner, or cabinet maker as he was after the shipping industry gave way to oil in Aberdeen) to make sure you have tight joints. Not loose ones. 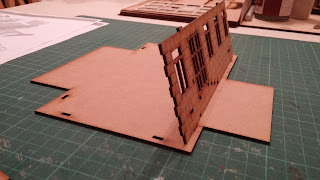 Anyhoo, here's the parts laid out on my bin liners after giving them a size made from PVA and a little water. This seals the MDF which means you can paint it without all the paint soaking into the MDF and warping it. 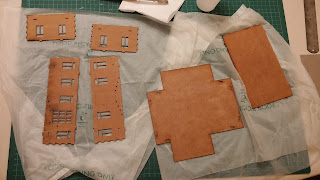 Once dry, I began painting the windows. I used a pale blue grey followed by a coat of white on the front of the window, leaving the grey visible in the cracks. You can also see I ran a test for the wall colour. It has more petrol blue in it than shows up in this next photo. 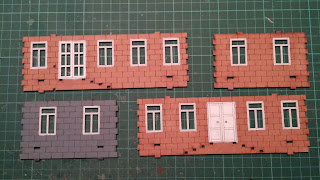 You can also see I painted where I imagined the inside frames to be.  I kept this in the pale blue grey colour for reasons that will be come apparent soon... 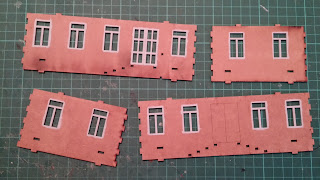 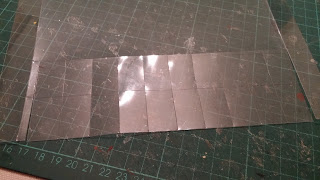 I then attached them to the inside walls with a little PVA applied sparingly with a brush.  Don't use superglue, as the oxidising process will cloud the perspex.  UHU would be just as effective, but isn't as accurate and leaves you open to risks of streaking the glass with strands of glue. 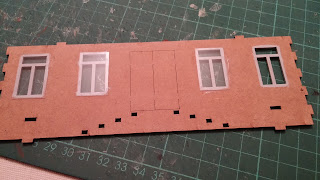 Then I began the process of painting the white window frame directly onto the perspex, leaving a thin line of the grey visible.  Fiddly, yes.  Very.  But not as fiddly as cutting out a 1.5mm frame in card! 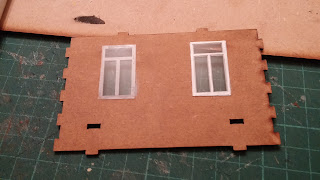 And as myopia began to set in, that's where I called it quits last night.  More to follow soon!
Labels: 28mm wargames scenery Chateau In Her Majesty's Name Sarissa Precision TT Combat