A Great Disappointment to Historians

Thought I'd show off my recent painting activity. This is Miss Greentree from Artizan Designs' Thrilling Tales range. I tried really hard not to make her look too much like Peggy Carter, but I'm not sure how successful I've been.

She'll no doubt make numerous appearances in various guises in our Pulp Alley games, as well as our Weird War Z campaing. But the main reason I purchased her was to provide me with a suitable model for Eat Hitler! The Nazi Taste Treat. Because in this game, she's standing in for the woman with perhaps the worst taste in men. Ever. 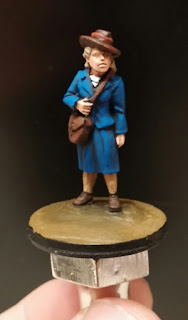 Yes, the woman Albert Speer described as "A great disappointment to historians..." 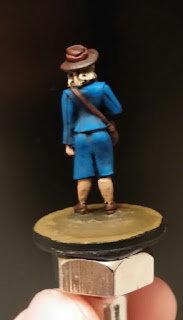 I'd disagree of course.  Well, most people with even an ounce of moral fibre would be bound to disagree with a Nazi on most things, but I confess to finding her an interesting conundrum.  Hitler himself said, "There is surely nothing finer than to educate a young thing for oneself.  A lass of 18 or 20 years old is as pliable as wax.”  Hitler met Eva as a seventeen year old convent-educated shop girl working for his official photographer.  They enjoyed a twelve year long tortured relationship that included several suicide attempts.  Even Hitler's chauffeur called her "the unhappiest woman in Germany" 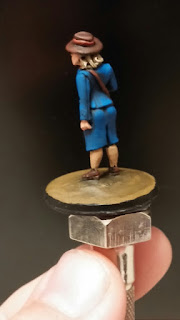 So, instead of leaving her to her natural fate (why?  What did she ever see in the man?) I'm going to take great delight in letting her join her hubby in a failed time experiment.  Instead of going back to 1933 and putting everything right, they end up in the Jurrasic period, and find themselves the dish du jour for a heap of Dinosaurs.