Untying the Proverbial Knot in Wargaming - The Boards

In the good old days of wargaming, we lined our little men along the long the opposite long edges of the available table.  The table then was invariably green.  Sometimes it was a series of polystyrene boards covered in railway flock.  More often than not it was a large piece of green felt.  On a very rare occasion it was a piece of chipboard covered with static flock.  Whatever it was made from, it had to be green.  A large open space with a few trees and an occasional hill.  The important thing was that it had to be flat with ample space to lay out your armies.  And whether it was ancients, medievals, Napoleonics or ACW, all boards pretty much looked the same. 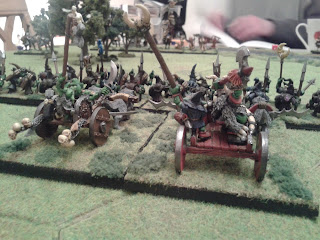 Sure, there were people like myself who baulked at the thought of random offcuts of coloured felt representing anything from hills to trees, but we were few and far between.  The game was the thing.

Thankfully we've come a long way since then.  And with the advent of skirmish gaming, the need for terrain has grown exponentially.  This I consider to be a good thing. 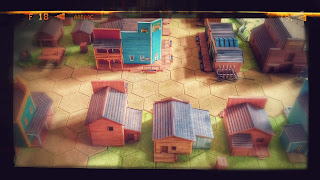 And therein lies the problem.

If you're anything like me, you'll have a large number of games and periods you want to game.  And they all have different terrain requirements.  Some require the tropics.  Others require a desert board.  Some need modern cities.  Others need the cobbled streets of the Victorian era.  And that's before we consider the demands of various fantasy and sci-fi milieu.

So whaddya do?  Well, most of my GW die hard fans rejoice in simplicity.  For some reason beyond my ken, they build armies larger than anything they can play in less than a fortnight of solid gaming.  And when they have done that, they start on another army.  The only possible benefit I can see in this is the collector mentality and the need for only one type of terrain.  And a blooming good thing that is, considering the cost of their Realm of Battle Boards.

But for someone like myself, this has become something of a problem.  I've been scratch building my scenery on a very tight budget.  And unfortunately I've had a lot of trouble with warping.  This has been rather depressing.  They no longer look as nice and flat as they do here, I can tell you! 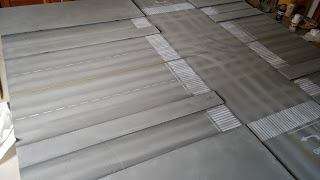 Most of my scenery is drop on terrain.  It allows me to use them in as many different configurations as possible.  Up until now it has all been scratch built.  Sure, like many wargamers I've been impressed with the quality of scenery being produced by 4Ground and Sarissa Precision.  But like many others, the cost has been prohibitive. Especially when you're wanting something like this...! 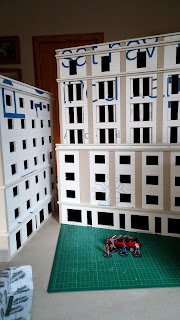 And then I recently stumbled on a company called TT Combat.  I wasn't actually looking for a piece of terrain at the time.  I was looking for a palette to replace the one I've been using for the last thirty years.  And while I was searching for something suitable on Ebay, I came across TT Combat's paint station with paint holder and palette for £10.95, post free.  After rubbing my eyes in amazement followed by the usual few days of procrastination, I gave in and ordered it.  It seemed too good to be true.

When it arrived I set to work building it.  And it's a very sturdy and well fitting piece of kit.  I use it all the time now.  And it's great because my Vallejo paints can't be knocked over any more.  Of course, if you use Citadel paints, there's a rack for them as well. Of course, as I discovered this, I also came across TT Combat's range of buildings.  Which are freakin' awesome and unbelievably priced compared to the competition.  And since I got a couple of kits for my birthday, I can also testify that they are made from thicker MDF sheet than the competition, which makes for a very slid and sturdy construction.  You'll be hearing a lot about these kits in the coming weeks as I post progress work here on my blog. 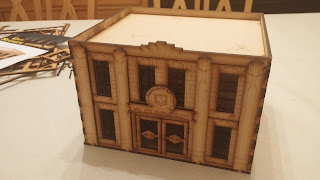 And yesterday, I discovered that they make a set of gaming boards!  They are each a foot square, have edging and a clip system that holds them together.  And you get sixteen to cover a four foot square area for only £29.95, post free.  Yes, you read that right.  And believe you me, after looking at B&Q's website, you can't buy he same amount of MDF for that price.

So I've ordered a set.  I'll be using them to make city streets.  And I'll be buying more for a desert scene.  And more for cobblestones and dirt.  And more for grass.  You know, for when I move away from my grass flocked Hexon boards.  Because this stuff is a lot cheaper and I'll be fully able to integrate the different themes together thanks to the clippy bit.

They will make the perfectly interchangeable base on which to build my worlds in miniature.

Honestly, if you've never heard of TT Combat, head over to their website.  It's well worth the visit.  You can find them right here: TT Combat