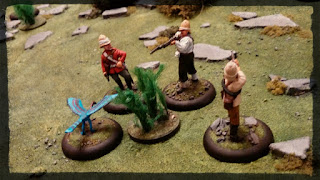 Sometimes you spend hours trying to figure out a force for a game.  Sometimes it comes really simply.  But when it came to In Her Majesty's Name, I've been humming and hawing for ages.  Since it came out, to be honest.

And then, a few days ago, I decided to apply a bit of common sense and use some figures I had painted a number of years ago.  And so I present Sir Rupert Utterley-Barkinge's Expeditionary Company, a group of God's own Englishmen (and a German and an Indian chap) who have literally travelled continents and time in pursuit of the greatest game available! 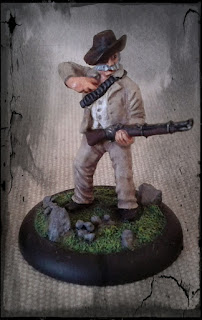 Here's Sir Rupert himself, always ready to take a shot at pretty much anything that moves.  Sir Rupert led the (in)famous expedition into the interior of the darkest heart of Africa, only to discover The Lost World.  His exploits there were recorded in his memoirs entitled “With Steamboat and Rifle in the Mesozoic”.  These papers were submitted with due diligence to The Explorer’s Club, a prestigious gentlemen’s club on The Mall.  Sadly, Sir Rupert’s findings were criticised most strongly by the club’s alumni, which is remarkable considering a number of their recent activities.  As a result, Sir Rupert now finds himself in the unenviable position of being considered even more untrustworthy than Lord Curr’s Incorrigibles. Sir Rupert remains utterly committed to exploring uncharted territory and seeking out new discoveries wherever his research may lead him. 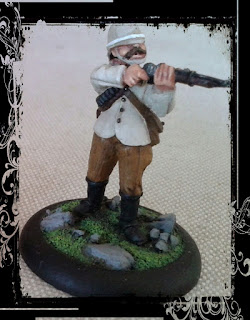 His great hunting partner Count Otto Von Wahnbildt assists in the financing of their expeditions and there is a friendly competition between the two gentlemen who take every opportunity to brag about the various game they have shot.  But only when they are not engaged in hunting the beasts, you understand. 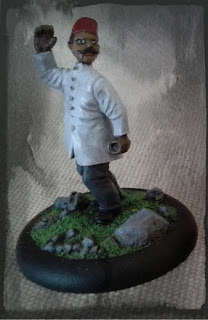 In addition, Sir Rupert retains the services of Goonda, his faithful manservant of many years.  Goonda has the ability to rescue his master from many an escape, which is perhaps confusing since he always seems to be waving farewell to everyone he meets... 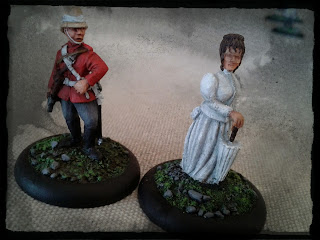 Here we see Major Payne and his lovely, if irritating wife, Lady Constant Anne Oyance-Payne who can often be heard long before she's seen.  This is normally because she's prone to being easily alarmed.  But that's to be expected from someone who still can't tell the difference between a Compsognathus and T-Rex. Goonder refers to her as his early morning alarm. 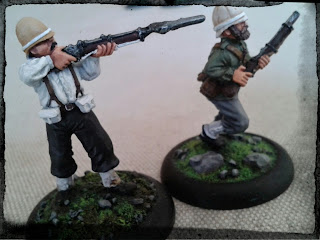 And to complete the company, we have Sergeant Reynolds and Private Gathering, both of whom have proven to be mighty handy in a fight.  Private Gathering's most famous moment remains the time he felled a mighty T-Rex with a single shot.  Not that The Times would run with the story, mind you.  Even though the moment was later immortalised later by the brilliant Sidney Paget.


Anyhoo, for the more statistically minded, I present my company in true IHMN fashion.  You'll note the lack of mystical powers.  And the lack of any fantastical steampunkyness.  I honestly have no idea how they'll fare.

A 296 Point Company for In Her Majesty's Name 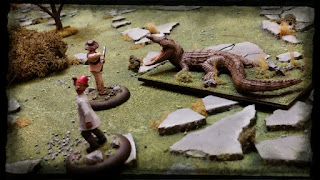