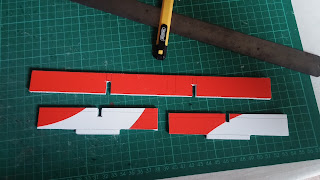 I decided to give in to my fears and add that additional support I spoke about in the previous post. It seems better to err on the side of caution. And with the necessary fittings measured and cut out, it was time to do another dry fit. 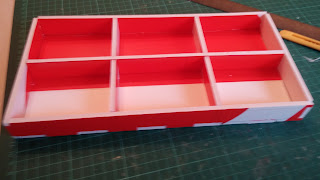 Since everything seemed to go together nicely, I went ahead and glued it all in place with my trusty Uhu glue. Sure, you could use PVA for this, but I prefer Uhu as it forms a bond much quicker. This, I find, helps keep each bit in the right place as you stick it all together.

Once this had dried (which wasn't long thanks to the Uhu) I was able to set about sticking on some rubble. You can see the tools of the trade in the next photo. 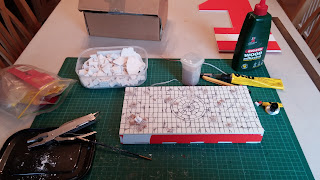 From left to right, we have:

The pliers tool I use to chip my plaster of paris spares from countless hirst arts mouldings.

My glue splattering brush. In a former life it had been a detail brush. Then as it began to give up staying in the correct shape, it became my undercoat brush. From there it became my drybrush brush until it became so useless I now use it to slop PVA about my bases and terrain. It stands in a long line of faithful brushes that have gone before...

Behind these are my Hornby ground cork chippings. There's two sizes. But years ago I only had one resealable bag to hand when I opened the packets, and they are both in there. Over the years some of the contents have fallen out to play in the safe confines of the resealable bag that is their home. This is no bad thing as it means I have a ready mixed supply I can go to whenever I need it.

At the back is my box of spare casts from my Hirst Art moulds.

Then there's my tub of rubble mixed from sand and cat litter.

Top right is my PVA glue. The good stuff.

And the rest? Well, that's just stuff I was using earlier and didn't bother clearing away...

Anyway, using all that, I produced this: 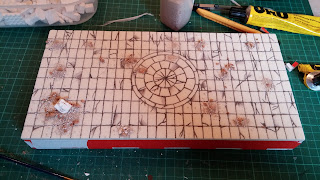 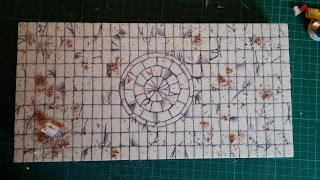 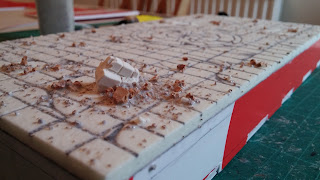 Which lookded rather impressive, and stayed that way until I realised I hadn't put anything on the foamcore to seal it. So I mixed some PVA with water and daubed it all over the top, thinking it would work like the Woodland Scenics Scenic Glue. You know, that wonderful stuff you spray over your layout to act as a final fixer for your flocks and scatter. It's formulated to soak into your scenics and it dries matt. Which is simply brilliant.

You can actually mix something similar yourself using 60% PVA to 40% water and a dash of washing up liquid. But it dries with a glossy finish. 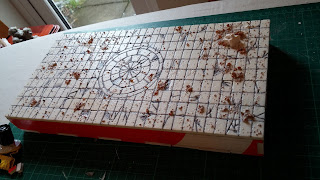 The downside to all this was the timebit took to dry. And when it had, I realised the rubble hadn't stuck properly. So I ended up having to remove the loose bits and add some more again. 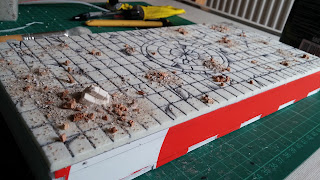 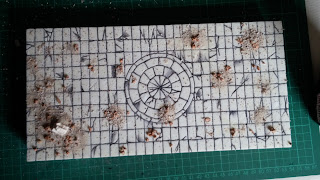 The next job was to begin the painting. This was the point where I realised I was going to have to put up with the brush knocking off a lot of the rubble I had taken so much time to put on earlier. However, I ploughed ahead with my big brush. Generally, the bigger the brush the better for drybrushing baseboards. Here's what it looked like after a lot of blending. 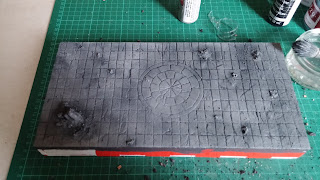 And here's the completed grey coat from a better lit angle. 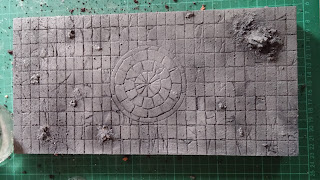 Then I began doing some detailed drybrushing on the piles of rubble. The next job, when this was all dry, was to add some washes. For this I mixed my usual muddy puddle colour from a mix of  English Uniform and Black. I kept the wash relatively thick and pretty much painted it on rather than washed the board. I then added more water and bled the colour across some of the flagstones to add some more variety to the blended areas. 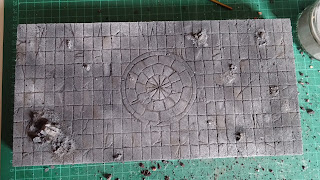 By this time, the board was too wet to do anything and needed a lot of time to dry. So until next time, I'm off to clear some memory space on the planner!
Labels: Fantasy Skirmish Scenery Frostgrave