Making a Ranch in 28mm

After another devastating encounter in Zedville (which can be found here: Episode Fourteen ) our gangs decided it was time to ditch TheBendyBuz and get out of the city.  We decided that the next game would occur out in the countryside where there was a greater chance of finding some survivors to replenish our gangs.  Ad because of the holiday season, we'd be playing our next game the following week, rather than the usual fortnight.

At which point I realised what I had let myself in for.

A whole new board?  Well, with apologies to those who have watched my irregular work on the 'Burbs boards, there's no way that gargantuan project will be ready in under a week.  Sorry, chaps and chapesses.

So instead, I'm looking for something that looks decidedly American.  And I immediately thought: Ranch.  Which led to a panic attack and an online search, because it's the one thing I didn't make when I was working on my Wild West scenery last year.

I did of course discover Sarissa Precision's beautiful MDF kit.  It looks stunning.  But at £45 it can look as stunning as it likes.  It won't be gracing my table at that cost.  For goodness sake, that much cash could launch me into Wrath of Kings...  But I digress!

Anyway, I decided on a simplified version, buoyed on by Matakishi's scenery for his Invasion of the Saucer People.  And with only a couple of hours available most days, I have until Sunday evening to get this model designed, made and painted.  I must be mad...! 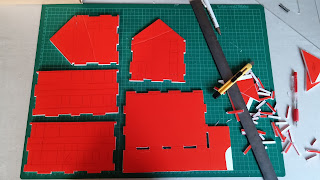 My first opportunity to work on this project began last night. As always, I used a ball point pen to draw out the design on my foamcore.  This proved to be more difficult than usual as the pen refused to leave a mark time and again.  This is the downside to using foamcore that was part of a POS advert in a shop in its previous life.  Anyhoo, as the above photo shows, I eventually managed to design and cut out the pieces, making sure I made the correct incisions to allow my building to join together properly.  The rest of the photos show how the pieces fit together, ensuring a solid build.  It's just a dry fit.  The pieces need to be separate to do the detailing work. 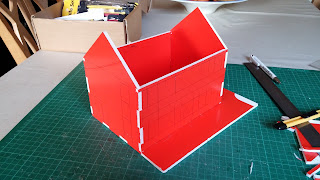 The building itself measures 20cm x 14cm.  The ground floor is 6.5cm, allowing 0.5cm for the veranda.  The first floor is 5cm, the pitch of the roof from a further 6cm.  The veranda is 5cm wide and runs along the entire front of the house and continues round a portion of the side. 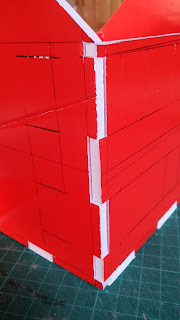 There are a few differences to the way I built my Wild West scenery.  I usually draw out the design on the foamcore with a black pen and then use a red pen to put in all the guidelines for the weatherboarding.  This clearly wasn't going to work on a build with red card.  To make sure I didn't cut it in all the wrong places, I decided to cut them out and mark these in afterwards.  Only time will tell how foolish this is.... 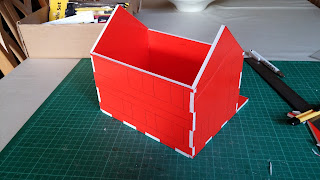 The other difference is that I haven't cut out the windows or doors.  This is because I have a cunning plan that will allow me to make more modern window boxes like those that appear on 4Ground and Sarissa buildings.  More on that later though, as I fear it is easier to show in pictures than to describe here.  And since I haven't gotten to that stage yet... 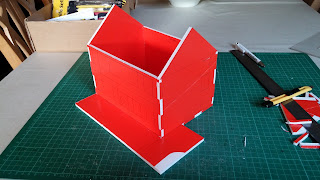 Next stage will be the windows, followed by weatherboarding.  It's a big project to do in the timescale, but it will form the centerpiece of the board I'm planning.  Stay tuned for more in the coming days!
Labels: 28mm wargames scenery Al Things Zombie American Ranch