The brief is simple.  I need to make a Ranch House in 28mm scale for our next game of All Things Zombie.  This will occur on Monday night, meaning that I have to have it all finished on Sunday evening.  Which is tomorrow.  You can read all about the start of this project which began on Wednesday by clicking this link: Part One and the game that resulted in this decision here:Episode Fourteen

Thursday gave me a monumental lack of time for hobby.  As a result, I only managed to draw the guidelines onto the walls of the house to ready them for the weatherboarding.  It only took 20 minutes, and I didn't have the gall to photograph this stage, let along put it on the blog. You'll be able to see the lines on some of the following photos while I describe what happened last night.

I decided the next thing to do was to work on the windows.  In the past I'd concentrate on the weatherboarding, covering the walls entirely.  The windows and doors would have been cut out before.  Once dry, the excess weatherboarding would be cut from the back.  The exposed foamcore would then be edged in card, the window frames, made from matchsticks, would then be added.  Finally the perspex would be glued in at the back, giving a recessed window.

I didn't want to achieve that look this time.  After lots of searching on the old interweb, I saw that many more contemporary buildings had the window frames more flush with the weatherboarding.  It's amazing what you notice when looking at the sets for Haven!

I therefore decided it was best to start with the windows, building them out from the foamcore.  Having made a building with twenty windows in it (I must be mad!) I knew that if I cut out the windows, you'd see right through the building.  The only way to cove this is to paint the interior black and insert some internal walls.  Neither is a time-saving option.

So I began drawing out the window frames onto a sheet of white card. 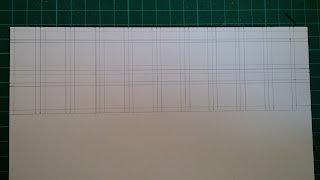 Then I measured the outer frame for the windows onto my good old friend, cereal packet card.

At this point, the plan was to put the thicker cereal packet card ontop of the white card.  I did this with a couple of them, and then realised the inherent problem with having only a 1mm width of difference between the two. 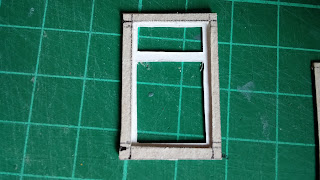 I didn't like the uneven look this was creating.  Even though the above photo I took as evidence of this fact doesn't look too bad.  Believe me though, you should have seen what the other one looked like...!

So I quickly changed my plan.  The cereal packet would go straight on the foamcore like so: 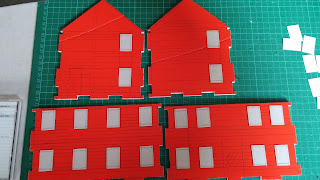 Then I would add a sheet of black card on top. 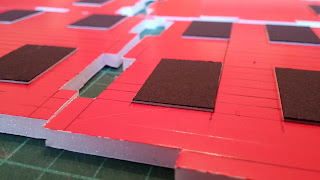 Then I cut acetate into shape... 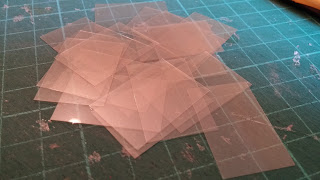 ...and stuck them on top of the black card, making sure I used only a small dad of UHU in the extreme corners.  I didn't want the glue to shine through the windows after all this effort!  Then i used the same careful gluing to add the original frames I had cut out of the white card at the top of this post.  The end result was this: 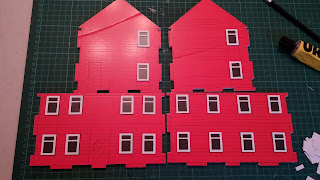 Then I began work on the doors.  These followed the same principle as the windows.  First a layer of cereal packet card, followed by a piece of white card for the door and a black one for the window.  The window then received a piece of perspex as can be seen in the next photo. 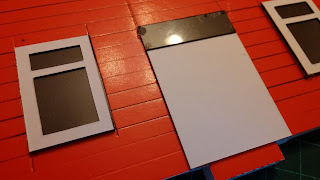 Then the window and door frame and the raised areas of the door were added. 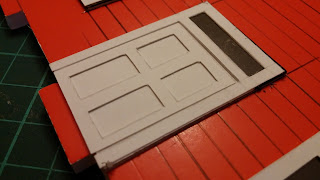 The same process was repeated for the back door. 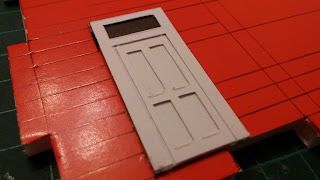 It might not look like a lot, but the whole process took a little over three hours.

Right, I'd best get back to it.  I've put in two hours already today working on the weatherboarding.  It's looking good, but it's taking some time to do properly.  Another post will follow tonight, when we'll see how far I've been able to get!

As always, thanks for stopping by!
Labels: 28mm wargames scenery All Things Zombie American Ranch