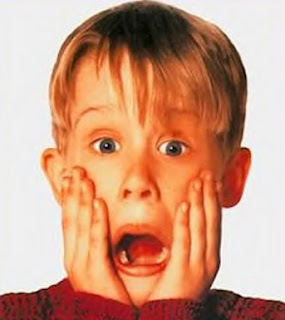 I'm kinda in one of those funny places just now.  I've got so many projects I'd like to see reach the gaming table that they've kinda gotten lost in the resultant mess.  Pandora's Box Paralysis (PBP) isn't really an issue here.  It's more a case of not being able to see the wood for the trees.  With a very limited budget, I tend to purchase what I'm most desperately wanting when I get the cash.  And with even less time than I have money to see these projects to completion, I'm pretty sure you can understand why I get myself into this mess.


So from the top of my memory, and a few forays into the mass of unopened boxes in my hobby draw under the bed, I present what I think is likely to be most of the projects I own at least something for in therms of rules and miniatures...

Of Gods and MortalsAssuming I use some of the Warlord Games Celts, I have more than enough figures to make a Celt force. Of course, I also want some Greeks and would like to get one of those MiniArt Hoplite models in 1/16th scale to represent Hermes...

Lion RampantAfter all those years of wishful thinking and empty pockets, Wars of the Roses is definitely possible thanks to the marvellous Perry Twins. All I need is another pack of their bills and bows.  Oh, and a sprue of foot knights. It's such a great system that this project really does need punting up the batting order.

Force on ForceThis is a move into 20mm 1/72 scale wargaming. Thanks to a cash gift this last Christmas, I own a USMC force for Fallujah 2004. Of course, I also need a force of insurgents. Oh, and a Fallujah board.

Kooky Teenage Monster HuntersI don't really have any miniatures for this one yet, but I do have a special plan afoot.  Watch this space for details!

A Fistful of Kung FuAll Ineed to do for this one is to paint up myset of North Star Military Yakuza miniatures, and I'm ready to go using my city boards for scenery. With some Chinatown bits added, of course.  Any excuse to add a new bit of scenery... 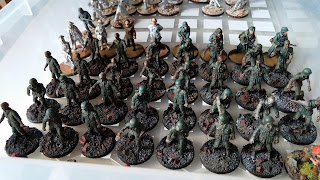 Weird War Z
This is for my own rules mentioned in an earlier post on this blog. It's based on the ATZ system. I've already painted all the Nazi Zeds, and the SAS NWE sections. I still need to make some Wehrmacht and paint the other half of the Last Levy boxed set. Oh, and make the scenery you require. And find some civilian models.  Not far to go then...!

In Her Majesty's NameAdmittedly, I don't own any figures for this yet.  Unless I proxy my explorers for Saurian Safari.  But no, I know exactly which miniatures I'm wanting from Westwind and Artizan Designs.  More on this at some point soon.  Honest.

Pulp AlleyTo be perfectly honest, I haven't really planned this one at all. I have my Artizan pilot figure. But beyond that, I need to plan some Copplestone figures and see what I need for the Perilous Island campaign.  So why am I mentioning it here?  PBP.  Pure and simple. 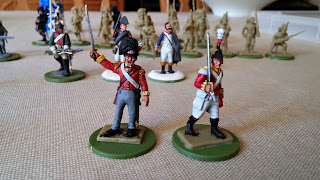 Sharpe Practice
Now here's a good one.  I already have all the figures I need. Victrix Peninsular British Light Infantry and Victrix French. I have a number of Riflemen, including the one I converted to represent Richard Sharpe himself. I've already made a number of buildings, though some more will no doubt come in handy (here I go again).  And let's not even mention my hopes of one day fielding whole Napoleonic armies from the 100 Days campaign.

Terrible Sharpe SwordAgain, I'veprobably got everything Ineed to do this one as well. I have A pack of infantrymen and a pack of Zouavres by the Perry twins. And a tonne of wild west buildings for scenery.

Celts and RomansI was planning to individually base so that they will fit on unit bases so they can be used for multiple systems. You know, like DBE.  And Field of Glory. And DBM. And WRG 6th. And Hail Caesar.  Because I have all these and more. Trouble is, I can't decide which one to play first.  Ideas, please, anyone?

Dux BritanniarumI have a full wish list for completing the necessary forces. I don't own much, but I've had my Christmas money set aside for this one since...well...Christmas.  Then it's just a case of making some scenery to fit the scenarios, and I'm ready to go.

ConfrontationYup, I'm delightd to say that we're returning to this wonderful milieu and system soon. So it seems a perfect time to paint some more of these fantastic figures. Now, last time we played this we used a number of ruins as a backdrop. Perfectly natural as most of the photos Rackham released were in a similar vein. But I could really go to town on this one if the opportunity arises... (And PBO hits once more!) 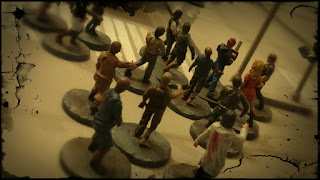 All Things ZombieYup, still playing it, and I'm still painting figures for it. 30 Zeds.  And more survivors. You know, In the hope I meet some more and can keep playing. And I'm making a new layout too. The 'Burbs. Mad or what? 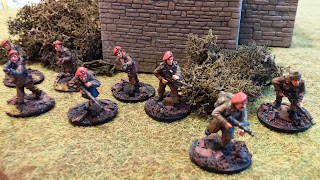 World War Two
I know that's vague, but it's an important vaguary. I have Perry Desert Rats. And a whole heap of Commandos.  And German Infantry. Would love some British Airborne as well. Almost all of them need painting. So what system I hear you say? Well, I love  Nuts!  And I own Bolt Action.  I know a lot of people who rave about it. And I'm really tempted to purchase Chain of Command. Good job this lot are all individually based then...

English Civil WarReally hate that misnomer.  The wars began and ended in Scotland and involved all four nations of this Sceptred Isle. But that rant aside, this is a period I've always wanted to game. I own Pike and Shotte. And Warfare in the Age of Discovery. And FOG Renaissance.  And Tercio.  And DBR.   But I have a feeling that I'll begin by working towards playing The Perfect Captain's Spanish Fury ECW variant with Tinker Fox. Because, blast it, I like big units in this period!

Do I have nay more figures to paint for Eat Hitler?  Maybe I do.  What about those reaper Mouselings?  Well, one thing's for certain.  It's about time I stopped writing this and decided which to paint first.

Thanks for reading my ramblings.  Please do feel free to share any thoughts on priorities, or generally how to handle such a diverse list of projects.  Right, stamina.  I need some stamina.  And skill.  Probably with a lot of luck.  Oh help, I've just regressed 25 years or so to good old FF...!
Labels: Force on Force Ganesha Games Perry Miniatures Too Fat Lardies Two Hour Wargames Wargaming Projects