Back to the Ranch Again (Part Four)

You can read the earlier parts of this project by clicking on the following links.
Part One
Part Two
Part Three

Okay, so we left off after a busy day of building with the Ranch House looking like this: 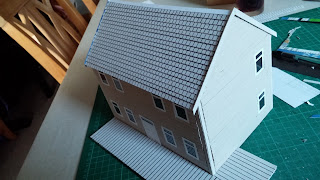 With a blessed but busy Sunday, I only had about four hours this evening to crack on with this project.  The first thing to do was to make the frames that would support the porch roof.  These were all measured and cut from some balsa strip.  I have a bag of matchsticks I brought more than a decade ago.  Its still going strong.  Unfortunately, the matchsticks were a little too short for what I needed.  This next photo shows the three pieces needed for each support, with the first one made. 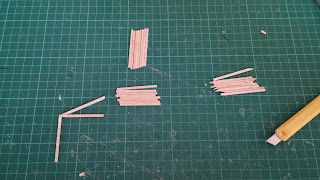 And here's all of them after construction. 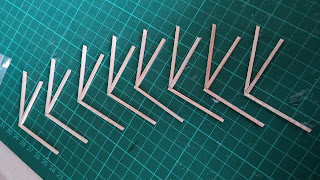 What to do next had me scratching my head for a few minutes.  It wasn't wasted time.  I had to decide whether to go ahead and make the actual porch roof, or start the painting.  I would have to have the front of the house painted before attaching the struts.  It's so much easier to paint this way.   I decided it would be easier to go ahead and start painting.  This is because experience tells me it's better to make the porch roof when I can measure it against the support struts once they were in place.  As much as I like the idea of having everything measured out properly to set dimensions, I'm aware that once put together, small variations caused by warping can play merry havoc with the theoretical distances calculated in the planning stage.

So I dashed to the loft, located the acrylic paints I use for such occasions, and began work on the porch floor. 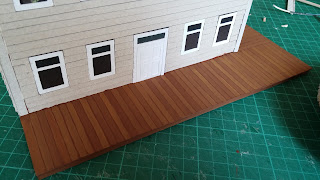 Then I began the laborious task of painting the building.  I decided to go for a favourite colour of mine. 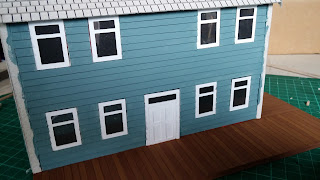 And since I had all the paints out, my enthusiasm soon carried me away.  And I went round the side... 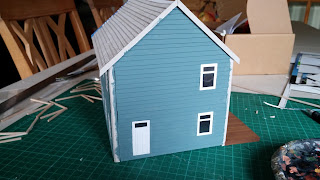 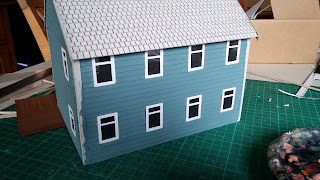 ..and I could hardly miss out the last side, could I? 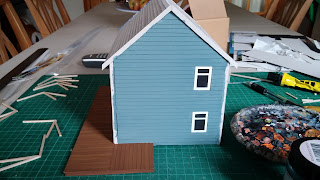 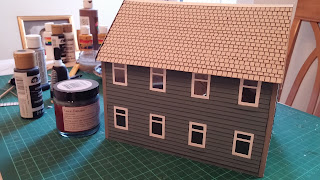 Then I painted the porch roof supports, resting them on my painting palette as I went.  Quite a pretty pattern really.  Incidentally, I should say this palette began life as a bone china saucer from a range called Albany.  I've had it to mix all my paint since I began painting miniatures.  I think I was about eleven when that happened.  Every model I have painted since has had its colours mixed on that palette.  Imagine me getting all sentimental over such a thing! 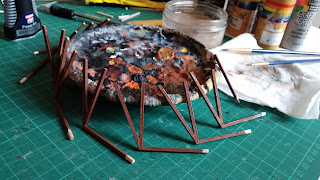 Why are the edges unpainted?  Simply because that's where I was holding them!  I had to go back to them before the next stage.

Anyhoo, with the walls, edges and floorboards painted, I was able to fix the support struts in place.  Here's some pictures from different angles. 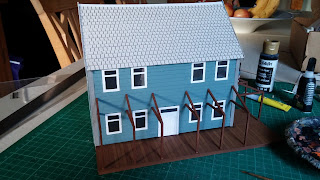 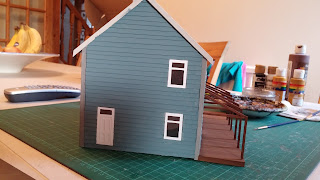 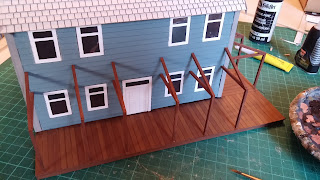 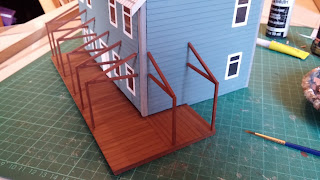 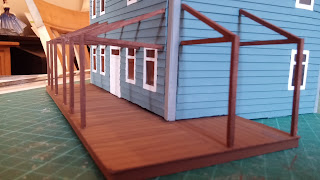 Of course, it was at this point that I realised I had forgotten to add the corner pole. 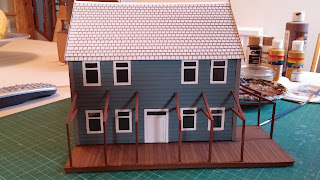 Which I fixed immediately... 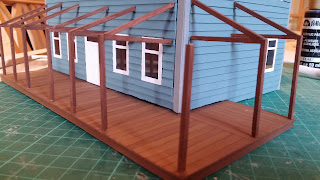 And to be honest, by this point, I was completely done in (I'm typing this half-comatose, dreaming of drifting off into blissful Elysium!  It certainly explains the number of typos I keep making!)

So what still needs to be done?  Well, the porch roof needs making, covered with shingles, affixed and painted, along with the main roof itself.

Is this possible?  Well,I'm hoping to make the porch after breakfast in the morning.  With a couple of hours free before my game in the evening, I might just have time to get it built and painted.  But only just.

Here's hoping I make it to the finishing post before my time runs out!!!!
Labels: 28mm wargames scenery All Things Zombie American Ranch