The Burbs are Back in Town...

Do you ever reach that point where you have so much stuff you want to do, and so little time to do it in that you actually don't know what to do and end up doing nothing. In ever decreasing circles?Well, I've decided on my first day off in months (yes, you read that right - sucky or what?) that I'm going to plough ahead with a big wargaming scenery project. Even though it may not get finished before we move on to another gaming sysytem. Some times you just have to go for it, right?﻿ 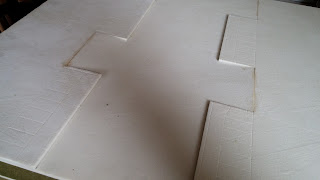 Which is why I'm here, working on a big project.  I'm right back where I left off a number of months ago.  The 'Burbs.  The enormity of what I needed to do on this project created a catharsis.  And as my work got busier and busier, it got pushed further and further out of my mind.  PBP took over and before you know it, I was painting Nazi Zeds.  Because why wouldn't you if you go the chance!

But the 'Burbs project has always been in the back of my mind.  I've been wanting to return to it, although I don't know how much longer we'll be playing ATZ before moving onto another gaming system.  (We don't stop gaming a system because we're bored or don't like it.  We move on because there are other systems we really want to play as well.  We move on knowing we'll get all Schwarznegger-like.  You know, "I'll be Bachk".  Just in a much less terminator-ey and Austrian way...)

But The 'Burbs will work for multiple game systems, just like the city boards.  This is why I chose an early setting for our games rather than a later Post-Apocalyptic vision.  Designed for ATZ, they'll be equally at home in games of A Fistful of King Fu, Fear and Faith & Kooky Teenage Monster Hunters.  Did I mention I've recently purchased the last two?  So, so glad I did.  They look excellent. There'll probably be a Collection of articles on this on my Google+ account before you know it!!!!!

So I just had to go with my gut and get on with the boards.  I've been wanting to do this for weeks.  With some hours free, I decided it was better to have a go and do something rather than sit and watch the time pass me by while I mused the logic of my choice.

Right then, here's what I've been doing today...

Where we had last left off, I had managed to complete the second board for my suburban setting for gaming All Things Zombie.  Of course, saying these are complete is nothing more than a complete misnomer.  This is because everything I have done so far has simply created a canvas on which all the details can now be added.

Unfortunately it now becomes increasingly hard to photograph the work that has been done. Basically because it's so hard to see.  Have a look at this next shot to see what I mean... 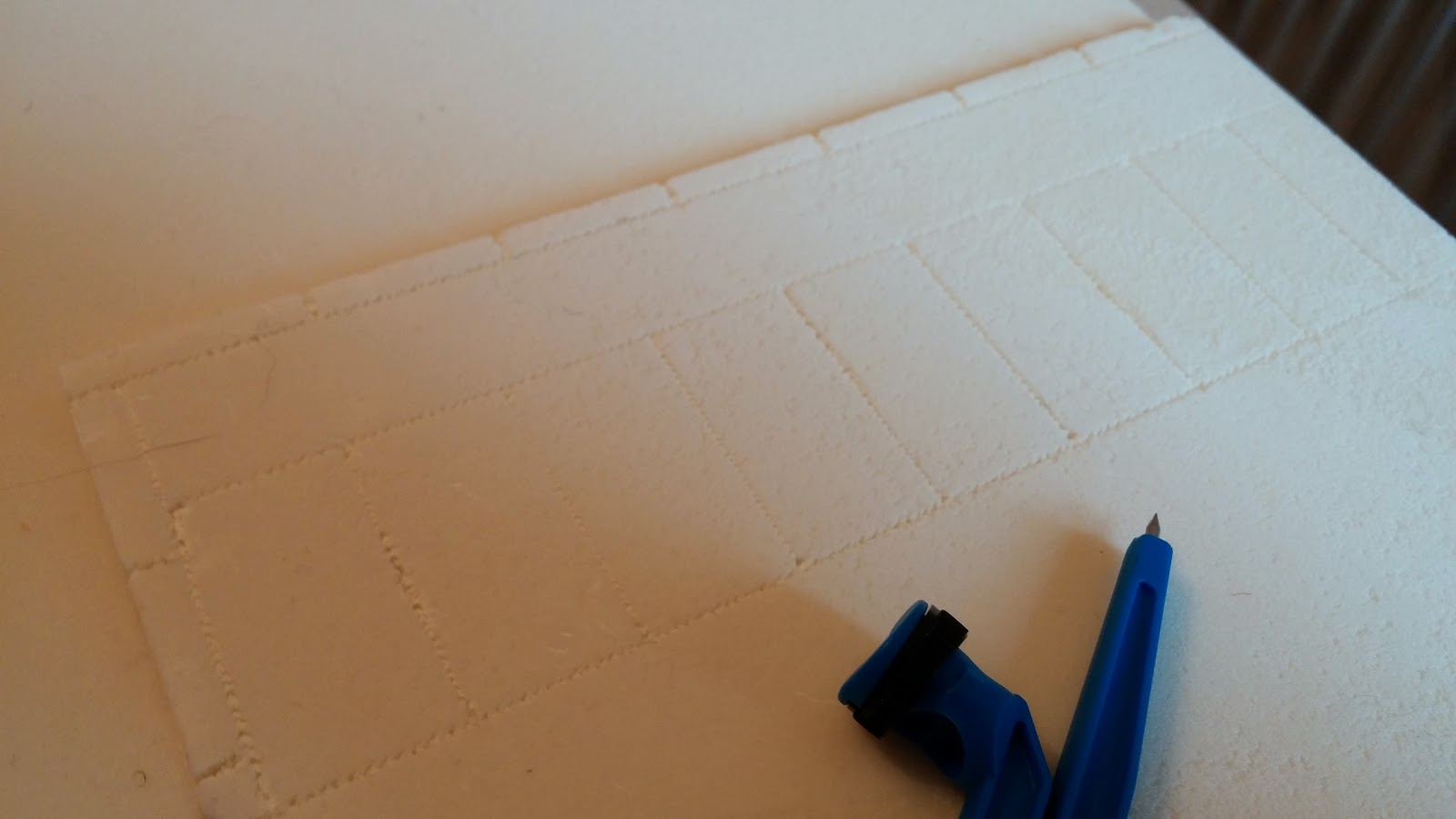 Honestly, you wouldn't believe how long it took to do this over a 2'x4' area.  And right now you're wishing I had used a ball point pen to inscribe the foam because right now, it's not exactly easy to see what I have done.

So if you'll excuse the picture, I'll try and describe why there's a compass on a piece of foamcore with not one single circle or curved edge in sight...

I'm using it to scribe the foam.  Yup, you read that correctly.  "Why?" I hear you ask.  Because it allows me to make marks far finer than a ball point will allow.  Plus, there's less chance of it tearing through the foam.  Now, there's probably a better tool for doing this which can be purchased for a large fee at a craft store, or I've no doubt an even larger fee with a GW/Citadel logo embossed on it.  If I'm completely honest I could have taken the effort to look out one of my dental scribes that I use for sculpting on plaster.  But I didn't.  And I'm really rather happy with the result.  I don't know how much of this is going to be visible, but here's how they now look... 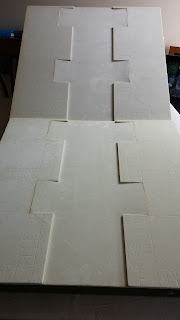 Okay, I confess it's hard to see, but honestly, there's a lot of work gone into them.  Each plot has been laid out. The lawn sections, pathway to the garden gate, the pavement slabs.  All measured to fit the buildings I haven't started on yet. 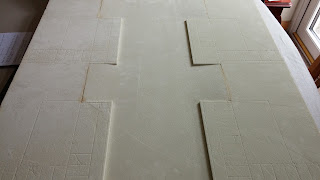 And once all that was done, it was time to size the boards.  I didn't do that with the city boards.  And they needed four coats of emulsion to get proper coverage.  Now, I'd ususally give a 60% glue 40% water mix to my size.  But when I came to my cheap as chips PVA from The Works which I use on these occasions, I discovered that it had already gone and separated out on me.  Must have been the years of neglect in my loft.  Ho hum.

So I decided to to make the most of a bad situation, and separate the two lots into two obliging plastic cups.  I took the photo after sizing, which is why the actual glue tub on the right of the picture below looks so empty.  I actually went for a brush full of glue on top of two brushes full of the whey-like watery bit.  It seemed to go on as good as an actual size mix, so I'm really happy with the result. 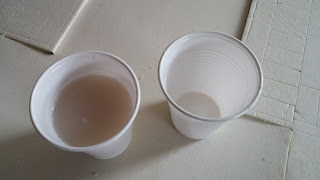 And look, the next photo shows that the sun does shine in Aberdeen sometimes! 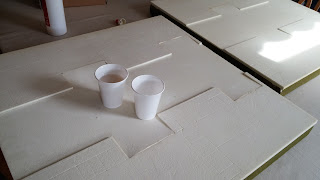 Of course, when you do something like this, the result often looks as if you've not bothered to do anything at all.  So I took the following photograph of both boards shining in all their newly-sized glory from all the sunlight coming through our back door. 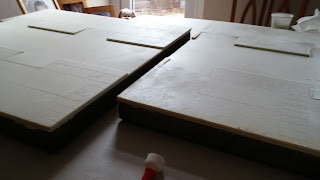 Which of course means I need to leave this to dry for a few hours.  And as they're now cluttering up my only available work space, I seem to have shot myself in the proverbial foot.

Next time: painting the boards, or making some buildings.  I can't decide which just now...