Always look on the bright side of (un)life...

When we last saw our intrepid survivors, they were driving full pelt through the city, dodging abandoned vehicles and mowing down any unfortunate Zeds that stood in the path of their newly-acquired conveyances.  They were well on their way to the 'Burbs when the Bazinator noticed TheBendyBuz was slowing down.  A check of the vehicle in his rear view mirror revealed a worried Gus shaking his head in resignation.  Chantelle wasn't sure if there was something wrong with TheBendyBuz, or if Gus was simply being driven demented by Alec.  Leaning out the window of her sports car, she could see Alec running up and down the length of TheBendyBuz waving his cricket bat and shouting something incomprehensible.

Soon TheBendyBuz came to a juddering halt at a street intersection, flanked on one side by The Bazinator and Chantelle in the sports car, and everyone else on the other in the SUV driven by Rick. 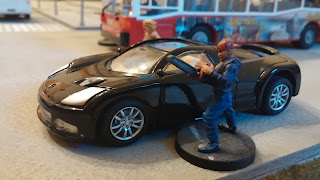 "What's wrong with her?" Rick asked.
"She's dead," replied Gus.
"You mean like that lot.." Chantelle said, pointing at the crowds of Zeds shambling towards them.

Thankfully there was a Diner across the street.  If they could get there, maybe they'd find more survivors, and the very least some welcome fast food.  That was the plan anyway... 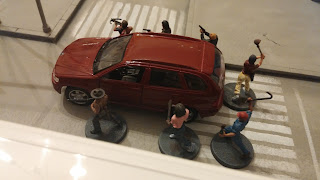 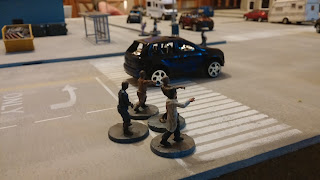 The following shot gives an indication of their location.  Clearly we were going to have to make a wide swing to the right if we were to make it safely to the Diner across the intersection.  Did I say safely?  Well there's wishful thinking! 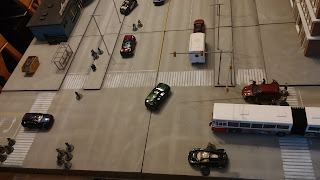 This was Rick's view from the SUV. 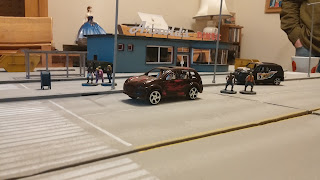 And here you can see Gus covering Alec as he exits TheBendyBuz, gibbering away and wielding his cricket bat as ineffectively as he has done since he saw Jenny eaten alive. 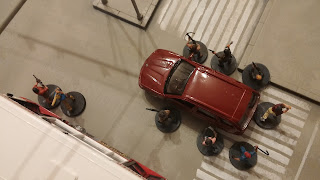 The activation dice began in our favour, allowing our gangs to make a dash to their right, desperate to make as little noise as possible.  If only the dice rolls could have been so kind.  Oops, didn't mean
to say that just now...

Gus had little choice but to move to a forwards position to get in line of sight with Chantelle and the Bazinator.  Without his influence, there was little chance of TheBazinator and Chantelle getting to activate.  He rested his automatic rifle on the hood of an abandoned car, and did his best to keep Alec quiet.  At this point, he appeared to be successful.  Don't always expect that to be the case though... 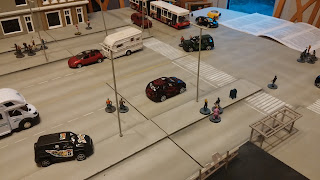 Meanwhile that bunch of Zeds led by an undead Sarah Michelle Geller seemed to be getting awfully close. 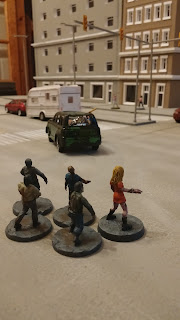 Not to mention that bunch of Zeds bringing up her rear. 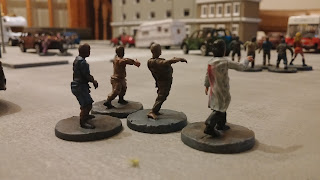 And then this lot started making their way towards Gus and Alec. 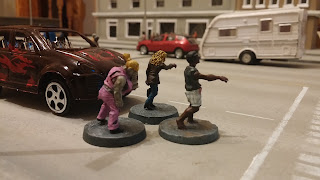 Thankfully the activation dice allowed Gus to motivate the rest of his gang.  Chantelle ran in front of TheBendyBuz, closely followed by The Bazinator.  Gus yanked Alec out of the wayand he set up guard between them all.  Alec clearly enjoyed the sudden movement as he must have begun hollering something utterly pointless.  And loud.  Because a Zed appeared 12" behind him.  Here's how the chase looked. 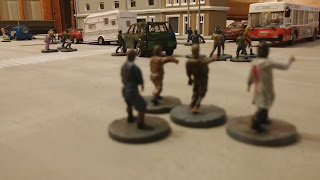 What that photo doesn't show is how close some of the Zeds were to my gang.  It would all fall down to the next roll of the activation dice.  You'll never guess how wonderfully well that went, now will you?  Let me show you in this next photo. 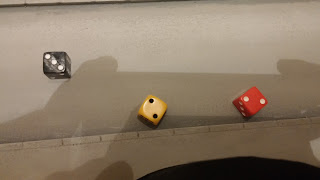 Beautiful, ain't it?  Well of course it isn't!  The black dice is a 3.  That's the Zombie dice.  As this is equal or less than a Zombie's REP of 4, it means the Zombies will activate.  And because it's the highest passing dice rolled, it means the Zeds get to go first.  "Oh, no!" you groan, at the thought of what may be about to happen.  But wait!  It get's worse!  Gus' red die and Rick's yellow die are both 2's.  "So, does that mean your lot will both activate together afterwards?" you ask.  No.  No it bloomin' well does not!  Any doubles mean the corresponding sides cannot activate.  Yes, you read that right.  No movement.  No shooting unless reaction checks will allow.

To put it bluntly, the Zeds got one over on us.  Look at this.  Six Zeds converging on The Bazinator.  It's a worry, let me tell you! 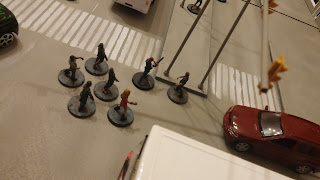 Oh, and as if that wasn't bad enough, look at what happened to Kendra, De Wamp-ihr Slay-ah.  Two Zeds on a Rep 1 survivor.  Gee, I wonder how that will end? 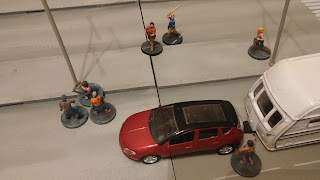 Well, thankfully, she failed her being charged check (what a surprise) and ran straight to the door of the nearest building.  Almost equally unsurprisingly, she failed both dice on her running action and only stumbled 8" towards her intended bolt hole.  I dread to think what she might have stumbled on if she had actually made it through those doors.

And then we rolled the activation dice again.  And once again, we rolled a 3 for the Zeds and two two's for the survivors.  Great.  Marvellous.  Beautiful.  So if you like gorefests, do, please, have a good look at the next photo. 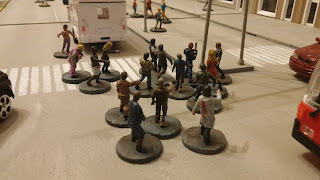 You see, the Bazinator was almost surrounded.  His way ahead was open.  But all those freakin' Zeds charging him from behind meant he had to take a surprise check.  Which, with only REP 1 meant he failed spectacularly.  Reading the result, I was over the moon to find he would fight with 0D6 this turn.  Yup, you read it correctly.  Zero.  Zip. Zilch.  Nada.

Chantelle had to take a check to see how she responded to seeing her loverboy get eaten.  She ran to the safety of a car and ducked down.  Next turn we'd see if she could get it together again.

And so I present a final photo of my most-killed model in ATZ.  Originally Baz, he was killed in our first ever game.  That was fun.  And now, returned as The Bazinator, he was clawed to the ground and eaten in one turn. 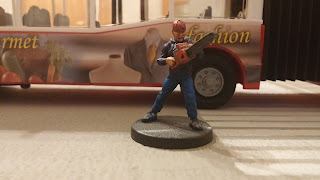 Finally the dice rolled in our favour, and we all made a dash across the board. Chantelle made a full recovery.  Gus managed to rally Kendra, but she would only follow Gus and take no further part in the game.  We would have to roll dice at the end of the game to find out how she would fare in the future.  Right now, the one thing we needed was the shelter afforded by the Diner.  And maybe a burger or two.  Each. 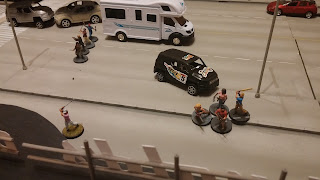 Meanwhile, the Zeds had finished their feasting and were ready for dessert! 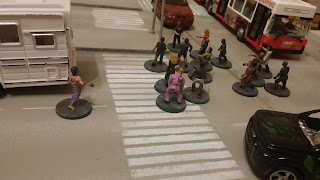 Rick's gang managed to get to the diner first. 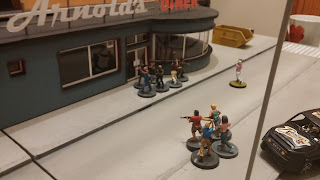 Thankfully, there weren't any Zeds in the immediate vicinity. 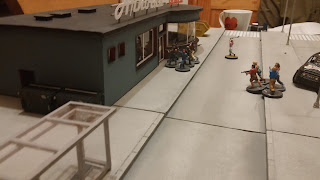 We took up defensive position as the activation dice went against us and the Zeds began moving in our direction.  Alec's shouting was getting us all down, bringing in Zed after Zed.  Chantelle was itching to fire up her chainsaw to revenge herself on the nearest Zeds.  Thankfully she was listening to Gus' reasoning. 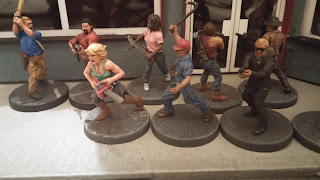 But once again, the Zeds were getting closer... 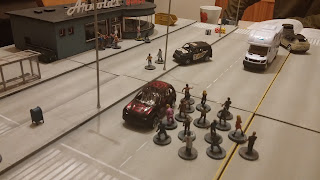 And there were more and more of them each turn. 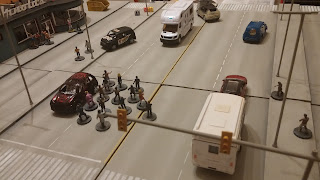 Rick and Daryl led their gang inside the Diner, encountering just a solitary Zed.  Which Rick shot to bits as soon as it reared it's lop-sided head over the sofa. 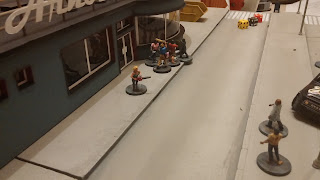 Unfortunately, while everything was going alright inside the Diner, my gang kept failing to activate. Who'd have thunk? Before I knew what was happening, A Zed charged Christie, our golfing medic and knocked her down.  Gus had no choice but to charge the next turn, dragging the dazed Kendra and the utterly incomprehensible Alec with him. 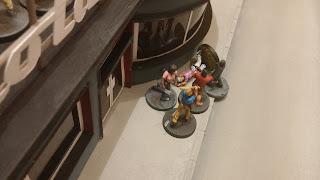 And still the Zeds kept coming. 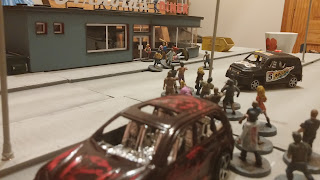 Rick and co started laying suppression fire into the milling horde of Zeds.  You can see here that they managed to knock two back, but not kill them.  What the photo doesn't show you is that before that they had reached Alec.  Surprised, Alec had 0D6 to defend himself, and to top it all was instantly killed. 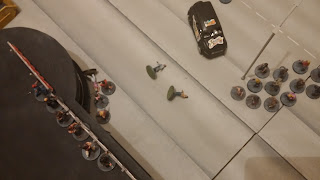 Gus shouldered his assault rifle and pulled Christie into the Diner, covered by Chantelle who pushed Kendra in the right direction.

With the game over, and a horde of Zeds wandering about the Diner's forecourt, we needed to find out how Kendra was.  And as if things couldn't get worse, we discovered that Kendra split.  She screamed obscenities at everyone and stormed out the back door.  We have no idea what fate will befall her.  But she will take no part in the rest of our campaign.

And then things got worse.

Christie had been stunned in her fight with the Zed.  This meant that we needed to check to see if she had been infected.  To determine this we simply roll 1D6, add the character's Rep (in this case 3) and try to score 7+.  If successful, there's no infection.  So that's a 4+.

As the evening wore on, Christie broke out in a fever and soon began convulsing.  Gus took his pistol, dragged Christie's unconscious and shaking body out the back door and shot her brains out.  He could hear the footsteps of Zeds drawing near as he went back inside the Diner, locked the door and returned to the kitchen where the rest of the survivors were waiting.

"Who wants a burger?" he asked as he reached out to open the fridge...
Labels: All Things Zombie Modern American City Wargaming Two Hour Wargames Wargames Factory Zombie Apocalypse Wargaming