We're All Goin' on a, Summer Holiday! 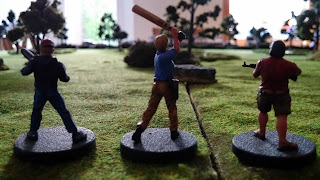 Get through the open woodland , weave between the lakes, dash across the open field, jump the hedge and head out on the road.  A cynic would say it was like doing the previous scenario in reverse.  Personally, I desperately hoped it wouldn't be.  Gus, my star, and the only original survivor both alive and on full control of his mental faculties, had nearly become the main course in the last game. Overall, there was hardly any of us left.  We might never break out of the city at this rate... 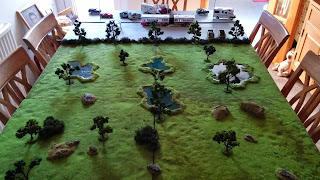 Of course, the real deja vu set in when we rolled to see how many Zeds were on the table at the start of the game. The roll of 2D6+6 gave us the lucky number thirteen again, albeit with a 6 and 1 rather than a 5 and 2. And it got really spooky when we grabbed 13 dice and rolled for location. Six of them 45 degrees to the left of us, a half dozen 45 degrees to the right, and one in the middle straight ahead of us. Exactly like the last time. This meant that once again our hopes of skulking around either edge of the board were gone. The only way out was through the middle. The only hope we had was that the Zeds wouldn't activate before us in the first two turns. If they did, we'd be the hapless filling in a Zombie sandwitch. And we didn't fancy that one little bit... 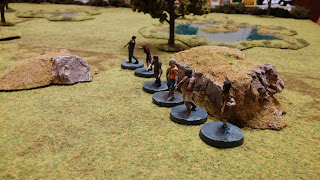 With Gus leading off with Alec babbling something incomprehensible to the ground, the Bazinator and Kendra (Die Wamp-ihr Slay-ah) did their best to keep up. 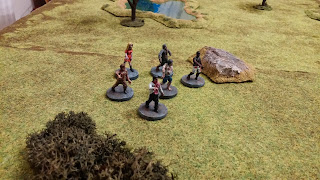 But it was a worrying time with all those Zeds to either side of us. As Gus' group slowed down,  Rick and Daryl made a dash past them and began firing at as many as they could. 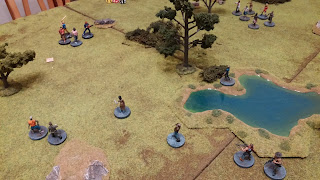 With the way ahead cleared for them, there began a desperate dash across the park... 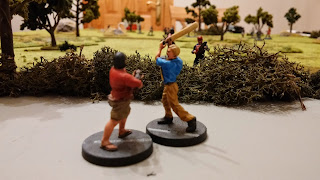 ...although they were all getting terribly stretched out. This was a worry, particularly for Kendra. With a Rep of 1, she was failing all her Fast Move Checks and getting further and further behind the rest. 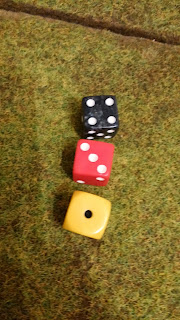 Which is precisely when the activation dice decided to let the Zeds go first. The Zeds use the black dice, Gus has the red dice, and Rick the yellow one. With a 3, Gus could activate everyone, save for Kendra. 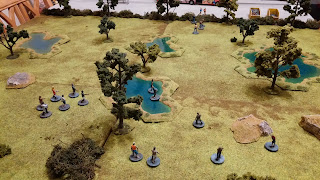 Soon the Zeds were stumbling through the lake. 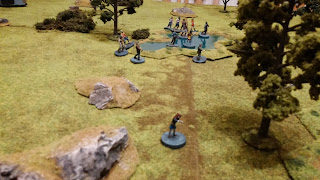 It was at precisely this point that the Bazinator decided to do something none of us expected. He decided to turn around and have a look at the bus. 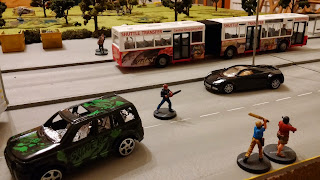 Gus looked on incredulously. It was a good thing that Rick and Daryl couldn't see what he was up to. 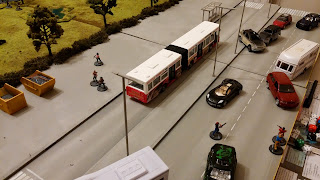 As the Bazinator Stepped on board there was a moment when everyone held their breath. We then entered a period of frantic dice rolling and chart consultation. First, would it be Zeds or survivors he'd find on board? And would you believe it, there were a total of four survivors holed up in the bus! We continued rolling dice and referring to the charts with a curious mix of incredulity and hope bubbling to the surface. They wanted to talk. They decided to join with us. And suddenly our numbers virtuallly doubled! 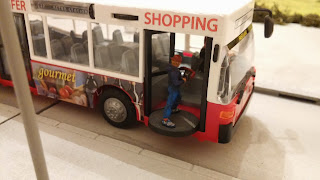 Christie, our golfer had joined us. And the Bazinator's heart skipped a beat whenhe met Chantelle, a rather well endowed young lady with the propensity to bounce back up if she ever fell on her front. The fact that she too wielded a chainsaw was the icing on the cake. Rick and Gus were worried about the noise they'd make together. In more ways than one! 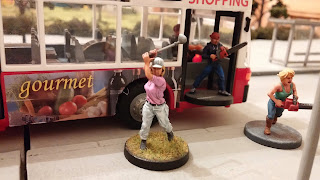 These two decided to join with Rick and Daryl. 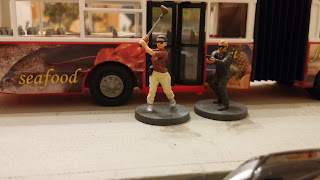 Whilst all this was happening, Gus decided he had to help Kendra. There was no way she was activating on her own with a Rep of 1. 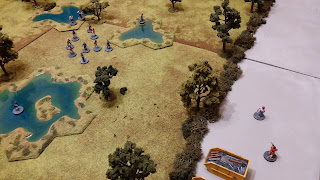 As the Zeds began shambling ever closer, the Bazinator saw the key was in the ignition. With nothing to lose, he gave it a go. With a roll of 1, the engine started. 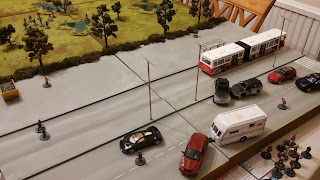 The noise of the bus engine was generating Zeds as the rest of the characters scrambled aboard. Thankfully they managed to pull off and exit the board before those Zeds at the back of the bus managed to catch up.
And somehow we managed to get the Zeds to stand still in the background of our brand new cast shot! Who'd have thunk? 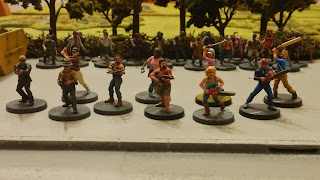