Apologies for the title. I seem to have gotten myself into the habit of using random song lyrics as titles for my ATZ posts recently. And despite this being more of a scenery making post, the genre appeared to win over logic.

Right, fo those of you kind enough to stick around this far, I've embarked on a new piece of scenery for All Things Zombie
.
Yup, getting my foamcore, set square, metal rule, cutting mat and trusty ball point pen out once again was something like a reunion with a good friend sorely missed. I've missed this scratch building malarky. 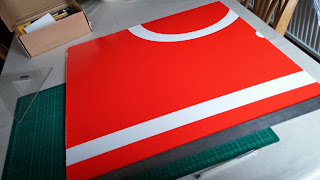 Not that I'm short on projects, you understand. There's my WWII set to make. And all the necessary stuff for Perilous Island. And not to mention all the stuff I have planned for Dux Britanniarum, Sharpe Practice, Of Gods and Mortals, A Fistful of Kung Fu and so on...

What was that?  Perilous Island, you say? Well, no. No it wasn't in the list a few months back. Not at all. But then again neither was IHMN either. But at least I kept that one to myself, now, didn't I?!?!?!?

Now where was I? Ah yes, the new piece for ATZ.

Now, it's not exactly obvious from the next shot, but that's the start of an American Diner I'm working on. Honest! 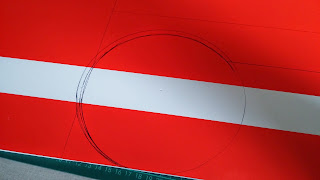 I was originally looking to do a simple archetypal long rectangular building. You know, the kind of thing that looks a bit like a railway carriage. But clearly that was just going to be too simple. So instead, I went scouring the interweb (or rather I let Google do all the hard work for me) until I came across a floor plan that took my eye. I have no idea how the real thing looks, you understand. But the curcular restaurant really appealed to me.  With a few minor alterations in mind, I began the task of laying it all out on the foamcore. 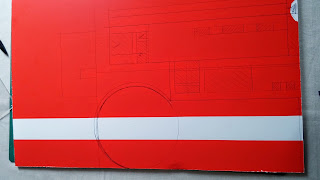 As with many of these projects, I have an idea in my mind. Getting the model to appear from them can be the difficult part. I originally decided to use a plate to act as a template for the circular part of the building. But wouldn't you know it, I didn't have one that looked right. This of course sent me off to hunt for my compass. Once it had finally been located, I set to work measuring out the sections.
Next job was to cut everything out. Which was fine until it came to the two big circles. It was at this point I began to wish I had opted for the simple rectangular shape. Drat my enthusiasm! 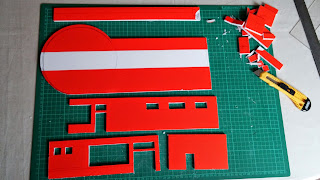 So here are the pieces laid out after cutting.  The flat roof section projects a centimetre all the way around the footprint of the building.  I confess I copped out and used the base as a template for the roof.  As an aside, you'll note the piece at the top of the above photo.  This will form the wall around the edge of the circle.  It's waiting to get thin slivers cut in it at 5mm intervals to help it curve.  It'll also be separated into two sections, but it is easier to cut a 2cm and 1.5cm strip when they are still attached to each other along their length.  I hope this makes sense.  Perhaps it will become a little clearer next time when I start to assemble all the pieces. 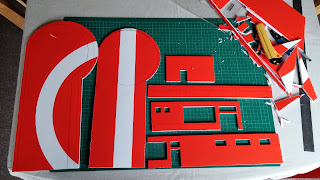 So until next time, thanks for stopping by!
Labels: All Things Zombie Modern American City Wargaming Zombie Apocalypse Wargaming