After many, many games of Zombie Golf and Zombie Urban Golf, we decided it was high time to return to the city and see what fate had befallen our gangs of survivors.  If you want to pick up on some of the back story and earlier escapades and can't be bothered to scroll down the blog, you can access some of the events here:

We didn't find things going too well, to be honest.

You may recall that Rick was trying to shrug off the loss of Lori and more recently Carl.  Honestly, Robert Kirkman would be rolling in his grave (if he were dead) to see the way our campaign has ridden roughshod over his IP...!

Gus has been joined by the Bazinator with his incredibly noisy chainsaw and fellow newbies the trigger-happy Pam and her twin BAMPs, and the twin-machete-wielding Kendra (Dee Wamp-iyre Slay-ah).  Those in the know will also remember that Gus is looking after the gibbering idiot formerly known as Alec, cricket-bat wielding extraordinaire, who simply hasn't been the same since he witnessed Jenny get chomped. 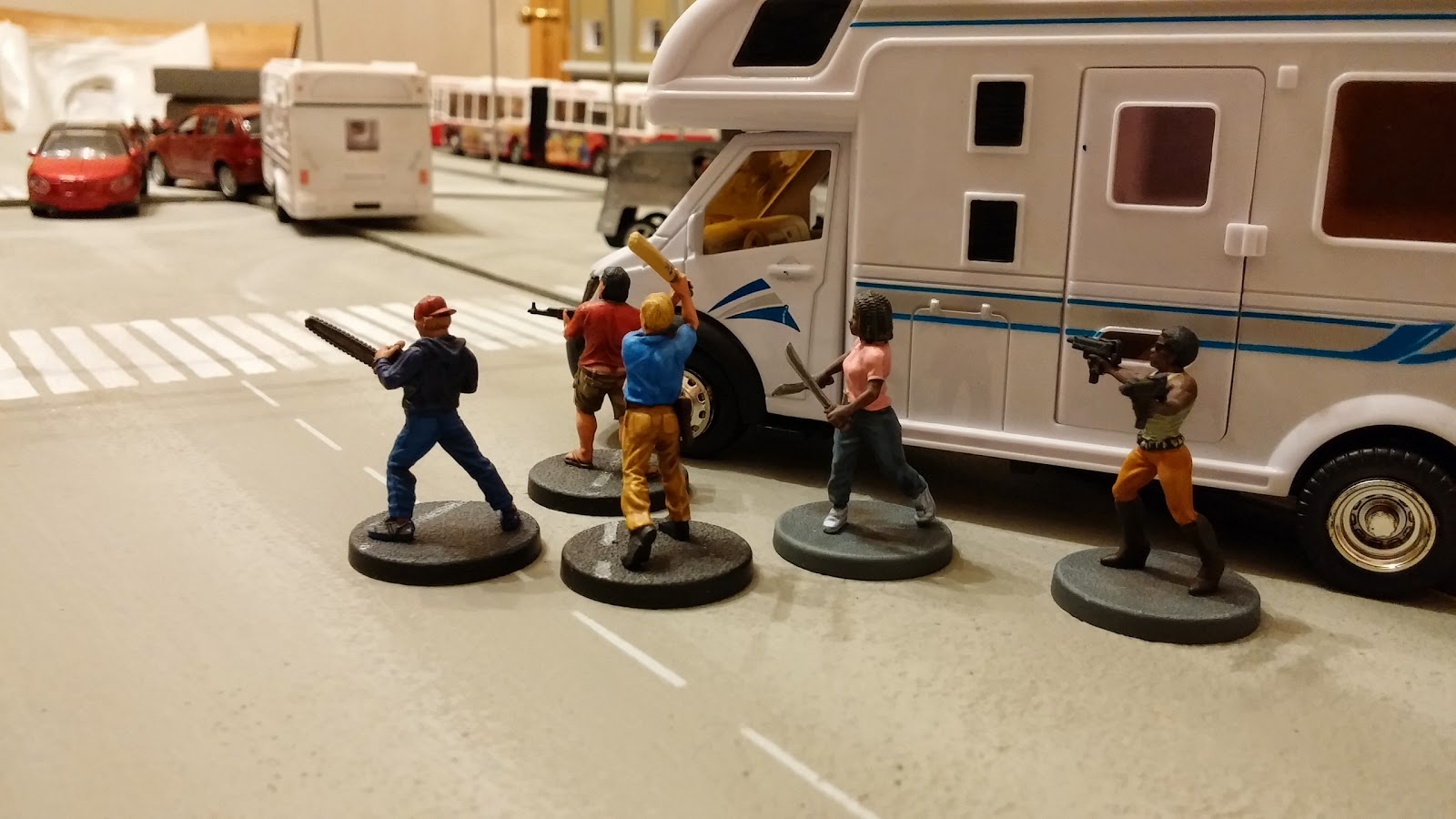 And here they are, above and below, as they bail out of their trusty RV, the Mystery Machine.  Why, oh why would they do this, you ask...?  Because, after months of survival, the RV decided it had had enough of trying to drive around on fumes, and came to a loud spluttering end at one edge of our board.  Honestly, you'd think it was planned... 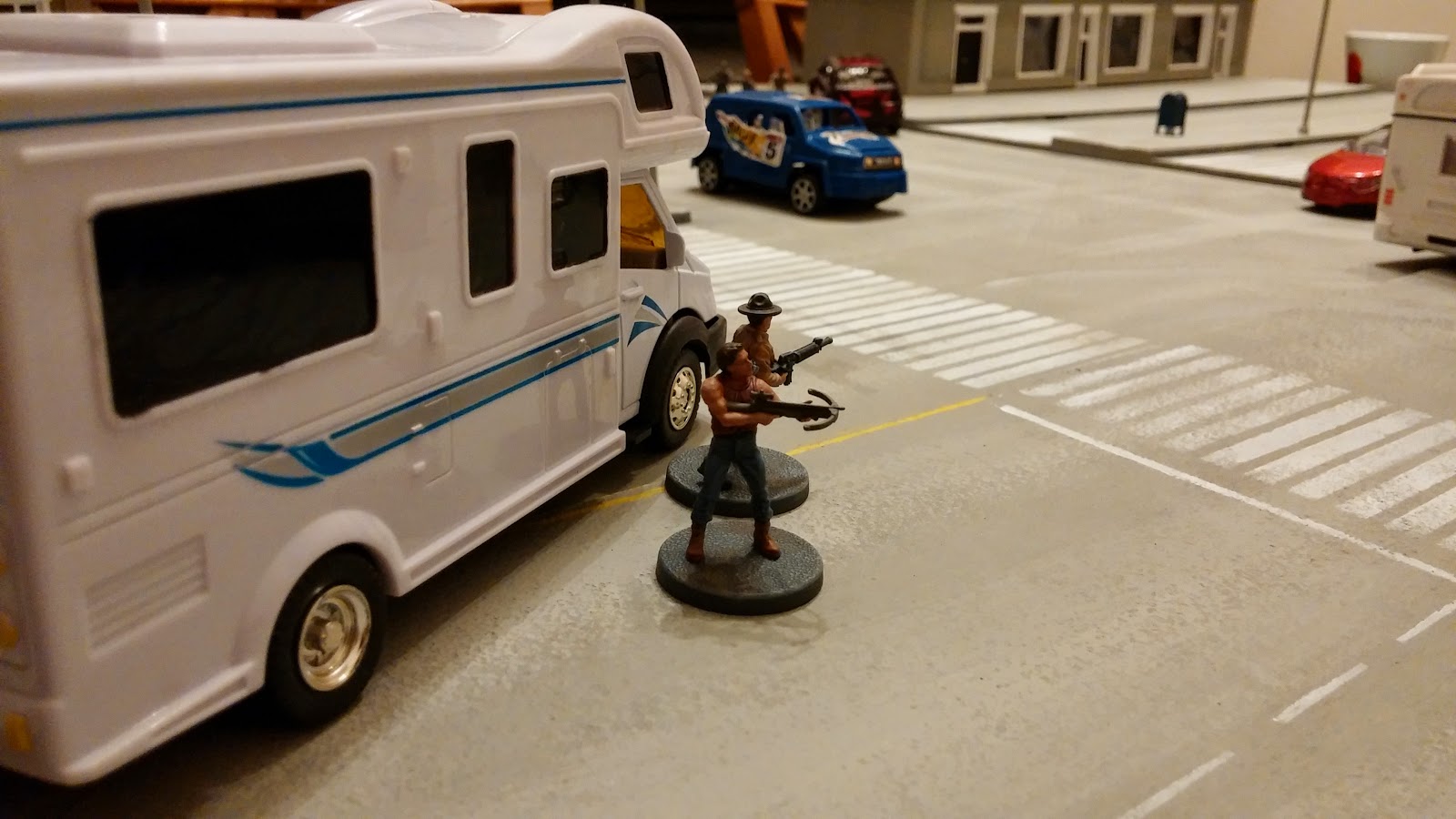 In game terms, we decided to commit to a three session escape game, each one requiring the survivors to escape off the opposite edge of the board they entered on.  To make it more interesting, we decided to roll 2D6+6 to determine how many Zeds we would encounter, and place them 24" away from the survivors rather than the usual 12" to give them a fighting chance.

Alec, of course, was about as much use as a chocolate fireguard.  So we decided that as Gus didn't have the heart to leave him behind, he would follow Gus around when activated.  we decided that in his madness he'd be babbling all the time.  To reflect this in our game play, we decided that he would count as a single shot fired at the end of the turn, measuring from his actual location at that time.  This would mean he would attract a Zed 12" away at the end of a turn on a D6 roll of 4+.

We rolled 11 Zeds, and placed them as you can see in the following photo.  The Zeds pretty much had all routes covered. 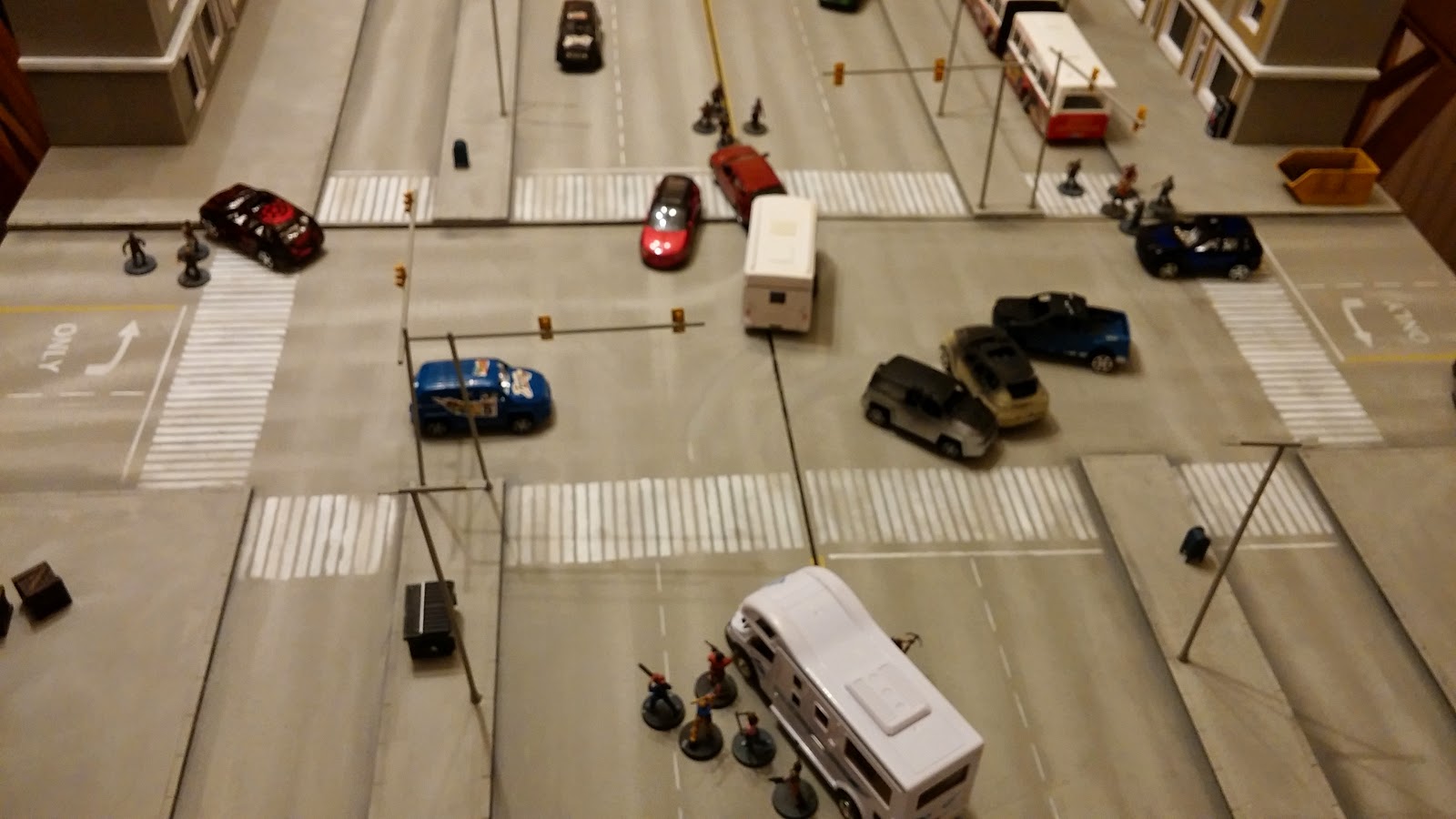 The survivors mad their way cautiously towards the middle of the board.  Daryl fired a crossbow bolt at a nearby Zed... and missed. 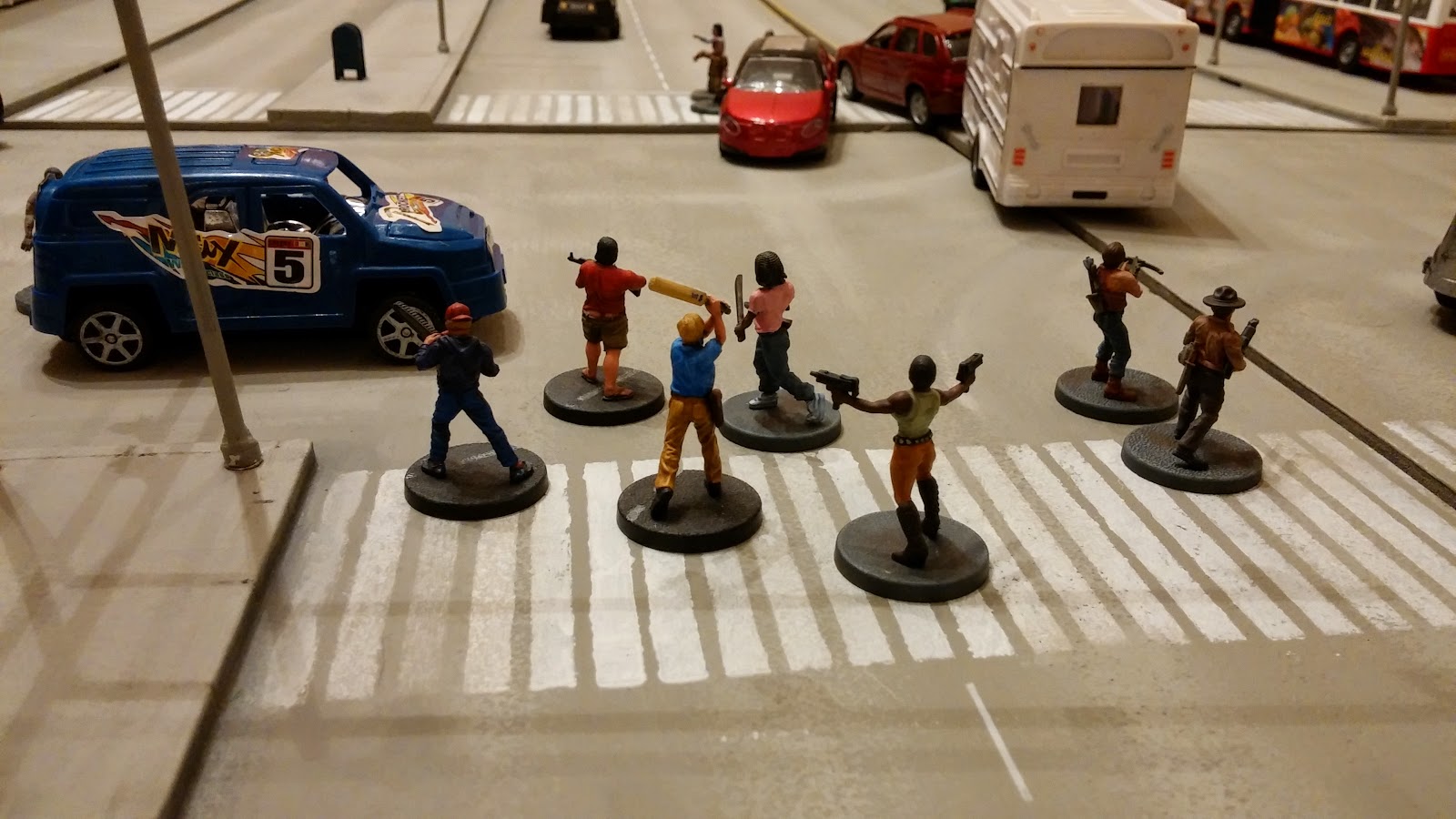 You can see that Pam was itching to get in on the action.  If only she had a half decent REP! 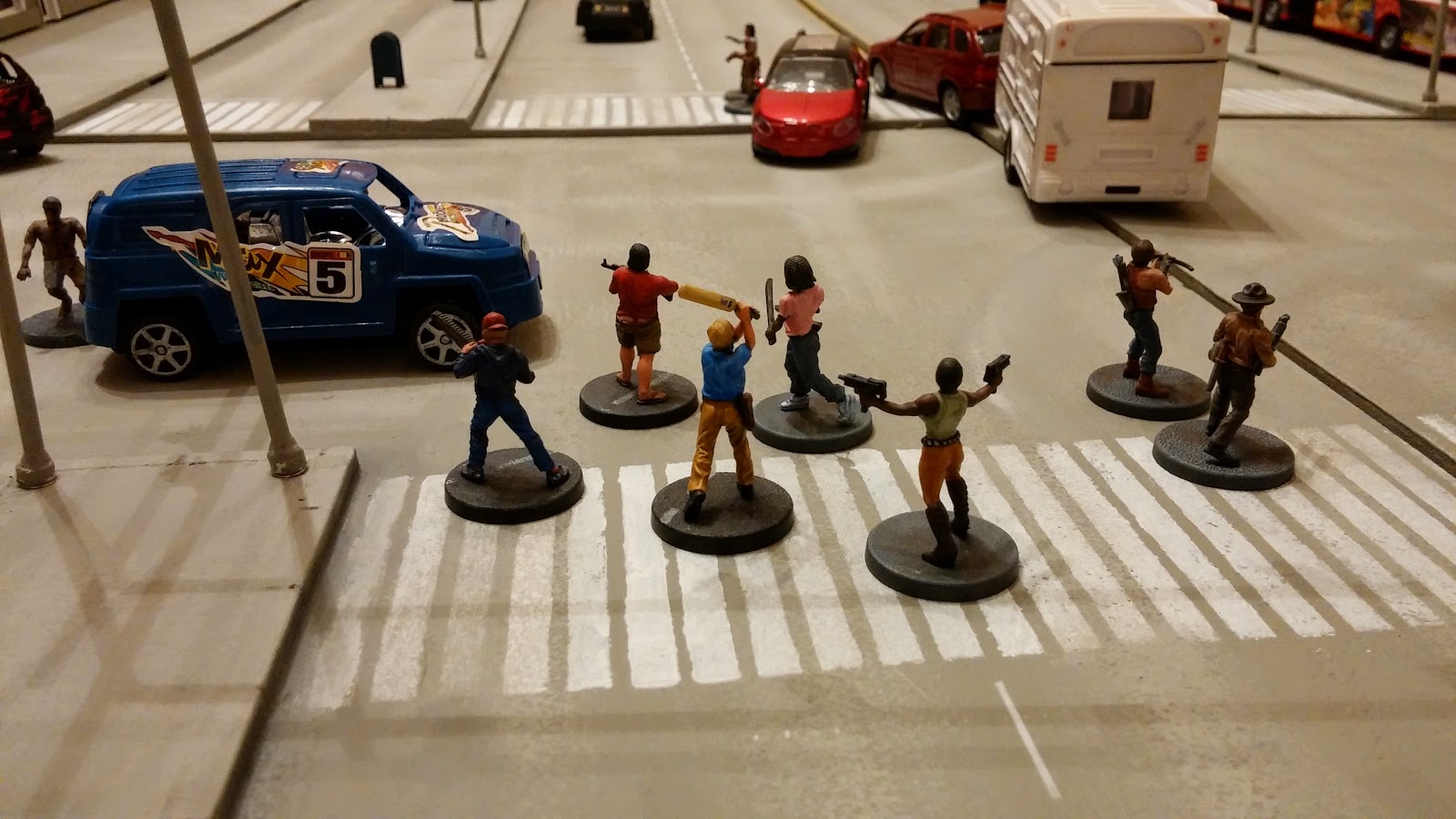 The Zeds began closing in, the activation dice giving them the advance on our worried survivors. 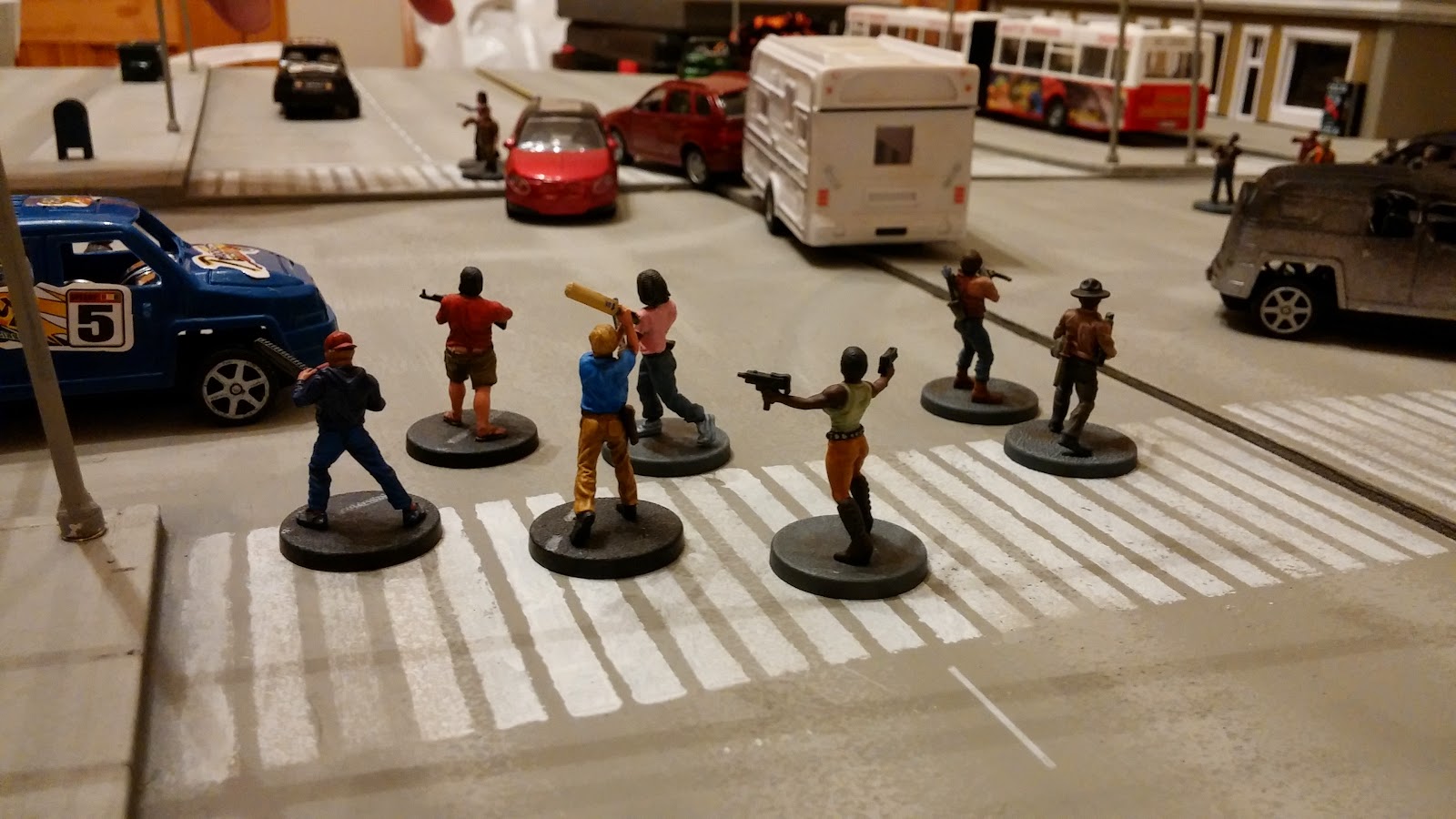 Wherever they decided to go, there would have to be gunshots.  Which would mean more Zeds.  Which is not a good thing to deal with at a point like this... 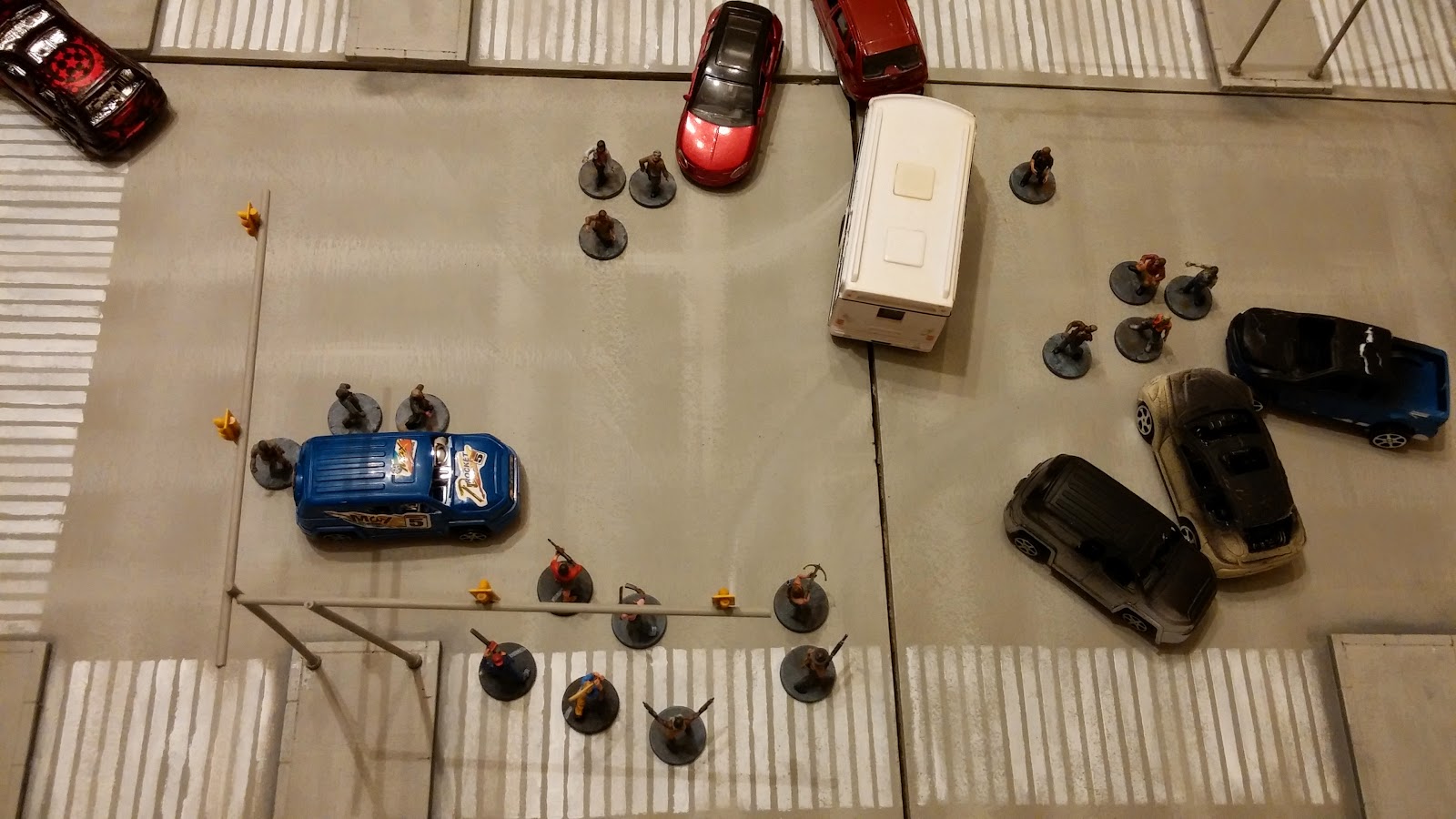 Rick and Daryl were the first to get a chance to break free.  Meanwhile, the Bazinator was attached by a Zed that managed to get himself around the car and still face the right direction.  Understandably, the Bazinator fired up his chainsaw...and the rest of the survivors got really worried.  Thankfully, he made short work of the Zed, but managed to stall the chainsaw in the process.  He yanked it free from the Zombie's cleaved cranium and joined the others in a dash to the safety and covering fire afforded by Rick. 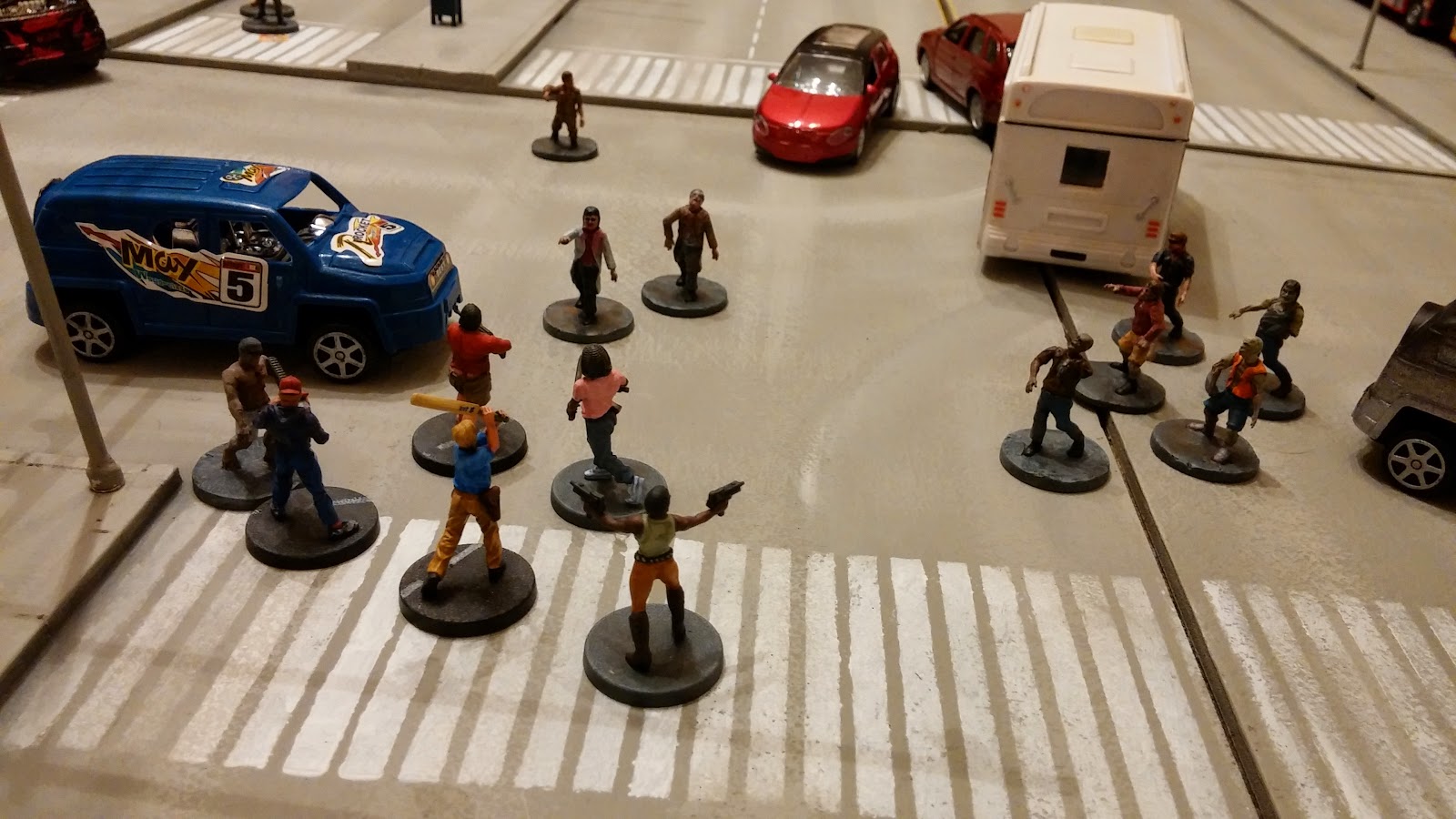 Apart from Pam, that is.  As is so typical of these occasions, the Fast Move check resulted in a 1, and since Pam has that wonderful ability (?) called Clumsy, she staggered forwards 1D6 inches (umm...that'd be a roll of 1 then) and promptly face planted herself on the tarmac. 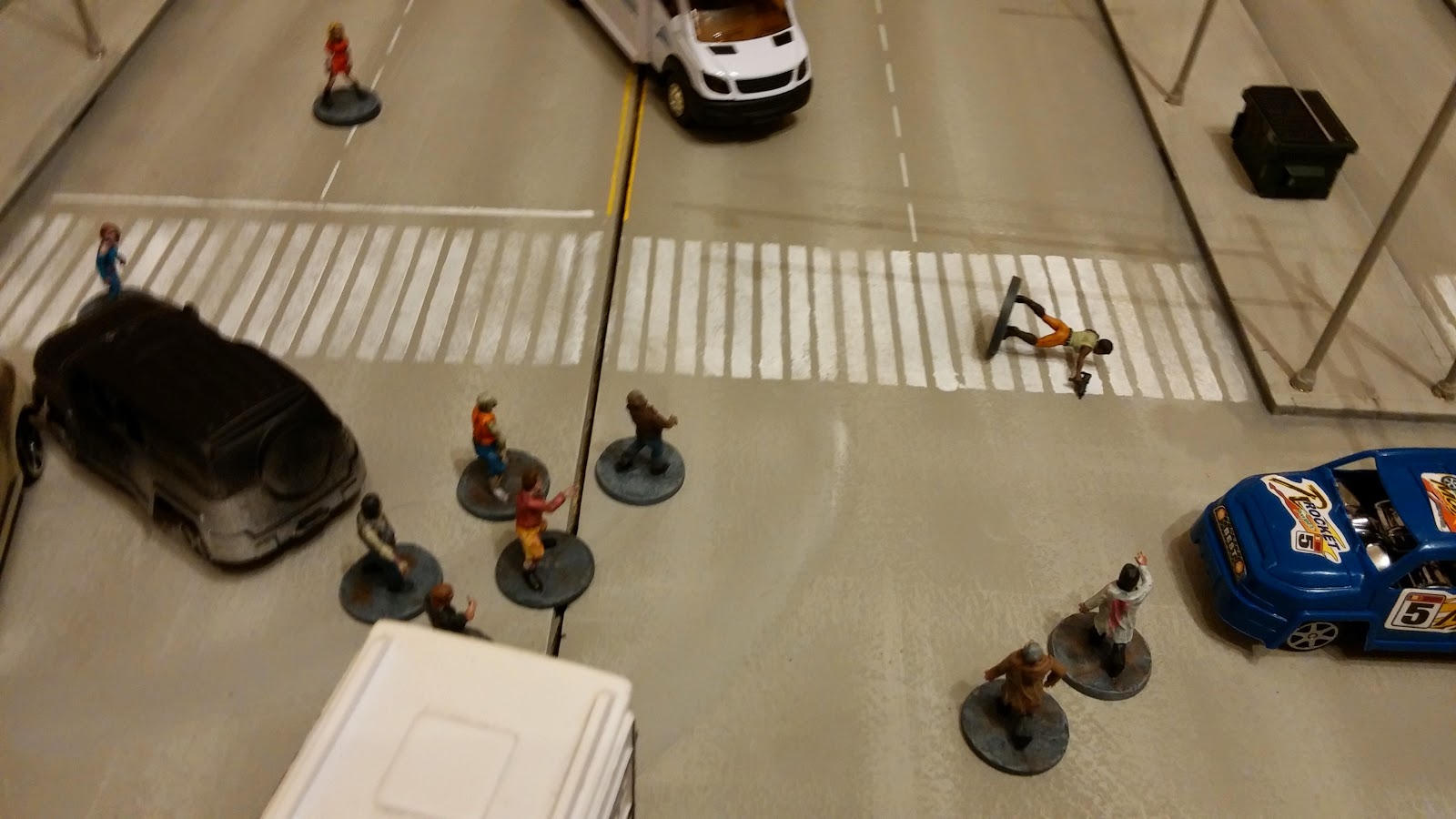 The other survivors looked on in horror as the Zeds moved closer to her.  They let rip with what firepower they had.  Which wasn't much.  As a third of that firepower lay in the prostrate hands of the aforementioned clumsy Pam.  Needless to say, their shots attracted more Zeds than they managed to hit, let alone OD.  Sigh. 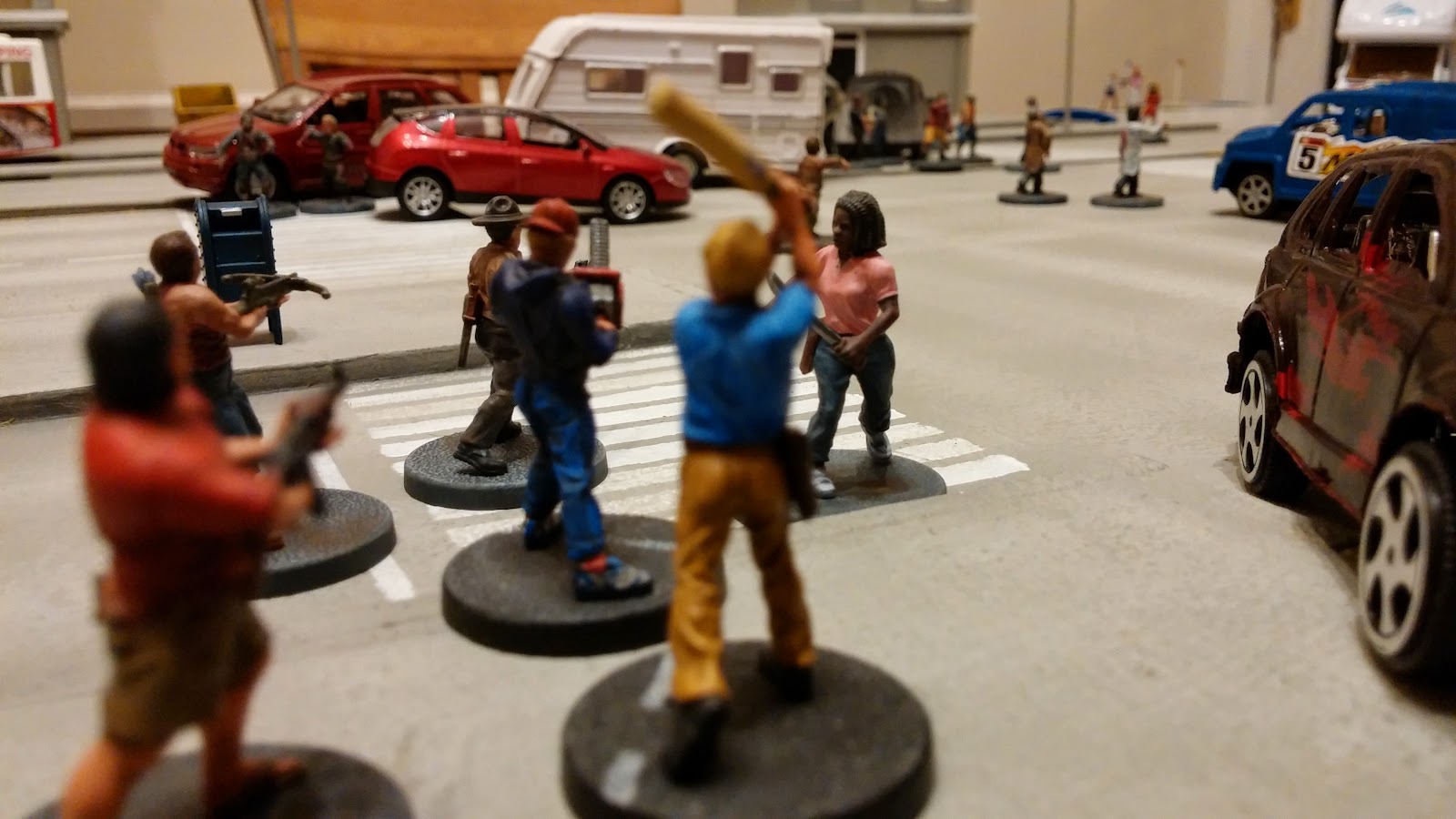 Next turn Pam managed to pick herself up from the ground.  She couldn't do anything else, mind, but at least she was standing. 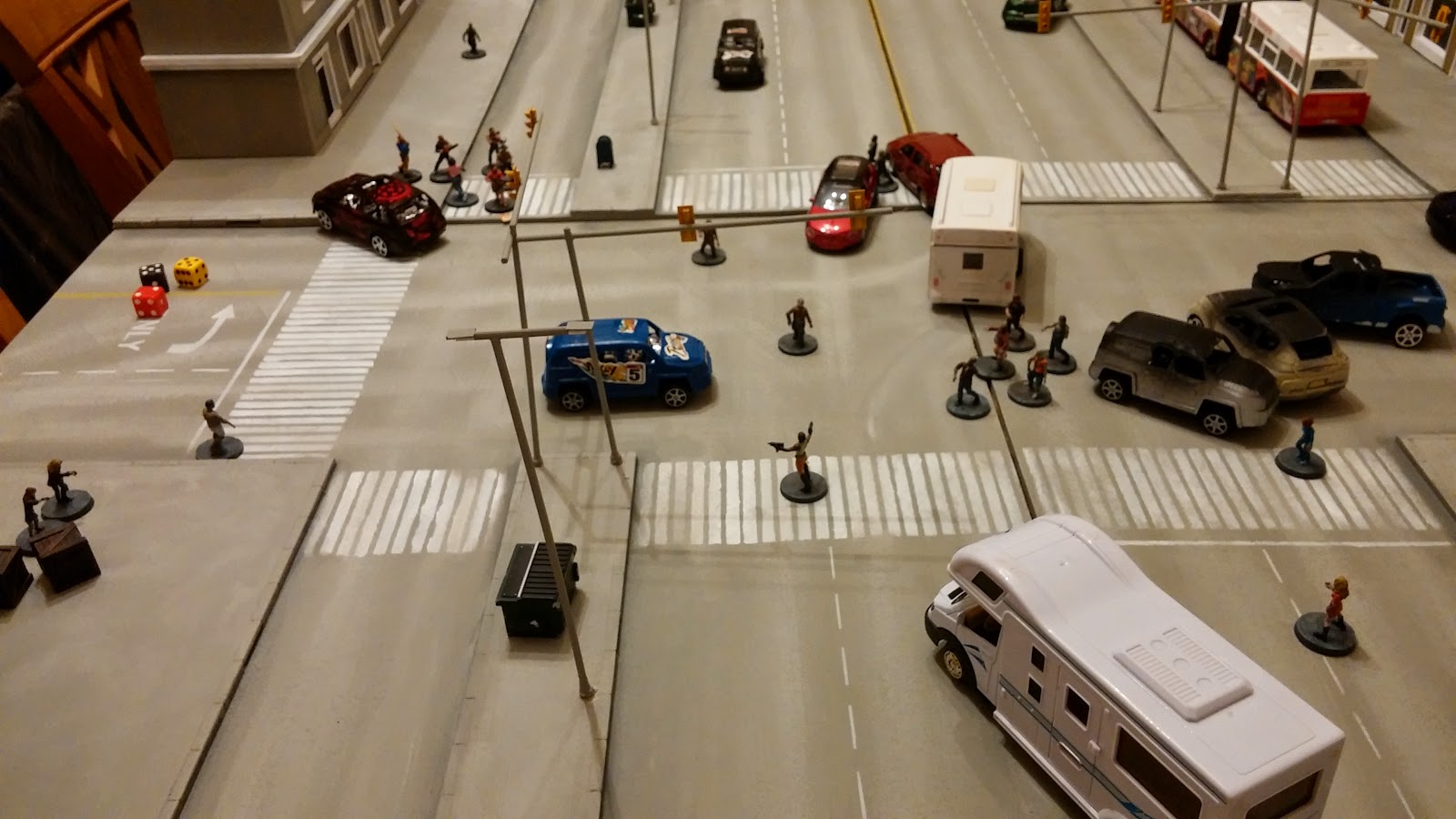 Next turn the activation dice went in the Zed's favour.  And wouldn't you know it, most of the Zeds were within 12" of Pam so they all went straight for her while the others turned to face the other survivors and shamble towards them. 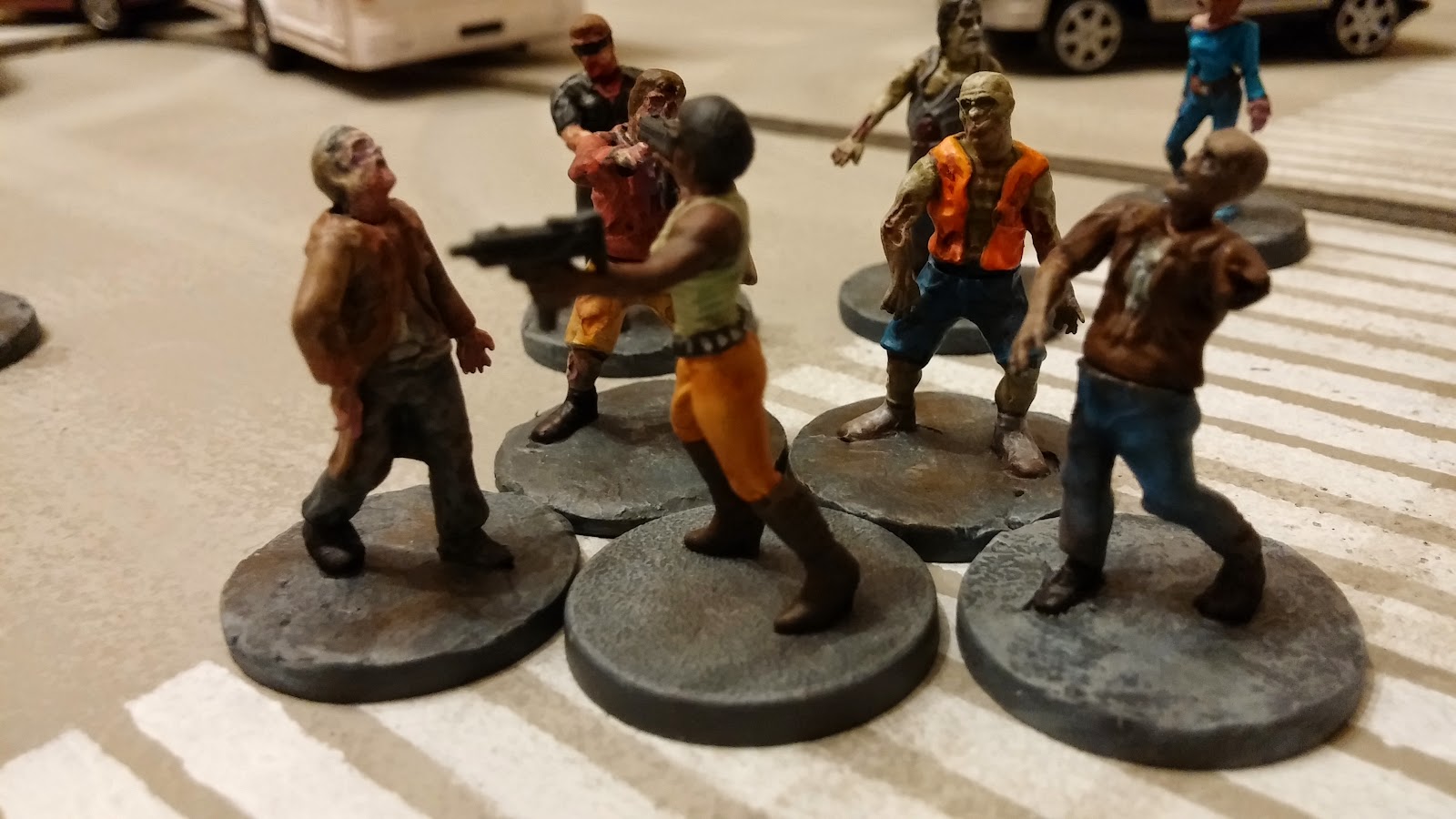 It might have been a worry for the others, but all they could do was stand and listen to Pam's screams as she failed a surprise check which left her with one dice to defend herself against four Zeds.  It was all to horrible to listen to.  She went down and became Zedlunch. 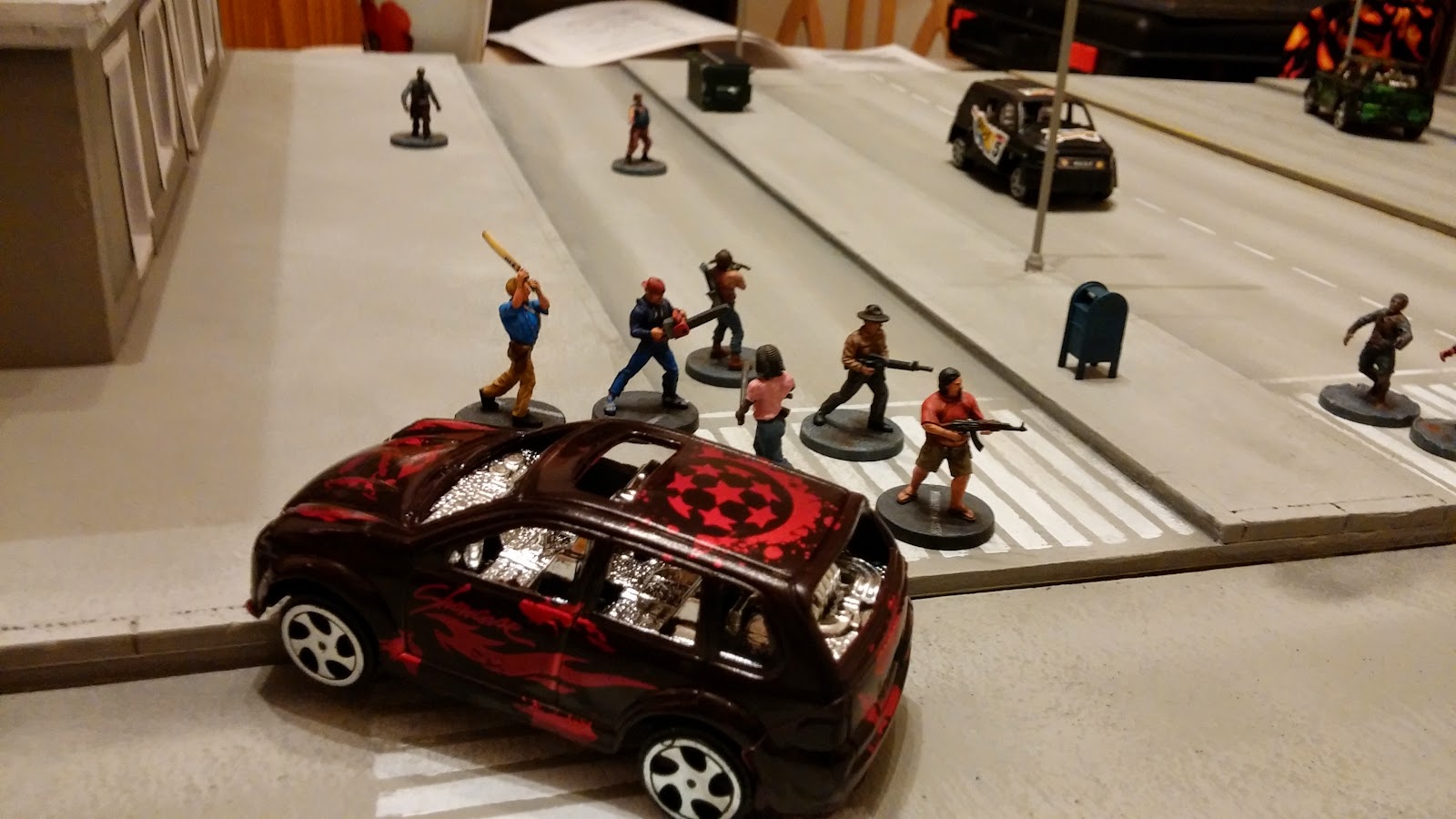 After finally managing some decent shots and a few spectacularly low rolls at the right time when it came to checking for Zeds, the remaining survivors made it to the table edge and safety. 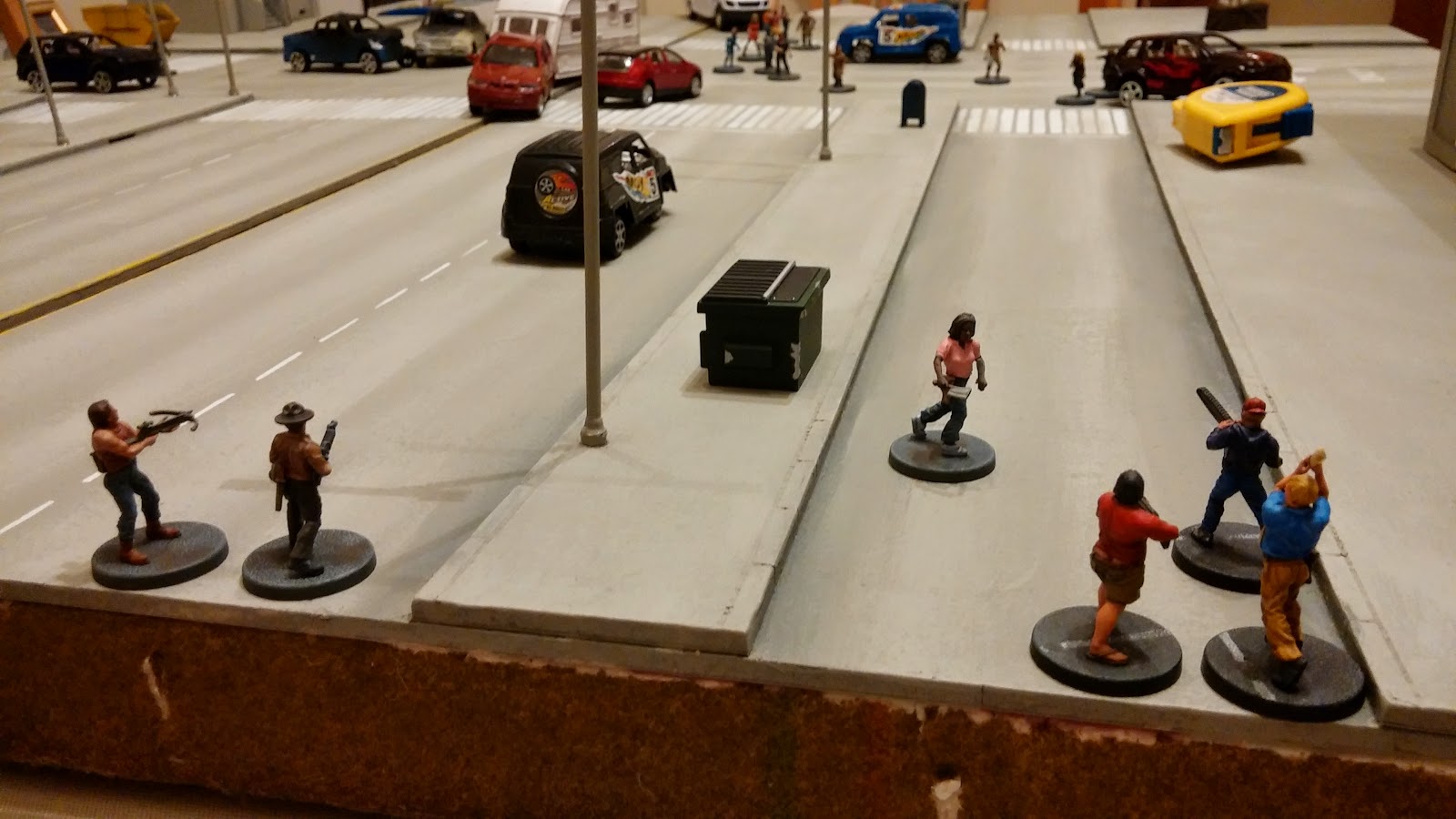 The RV was abandoned.  Pam was gone.  Gus, the Bazinator and Kendra felt terrible about it all.  Rick and Daryl were grimly determined to get out of town as fast as possible.

He was last seen wandering behind them all with a puzzled expression on his face, a pencil up each nostril and a pair of undies on his head muttering "wibble" repeatedly...
Labels: All Things Zombie Modern American City Wargaming Modern City Wargame Scenery Two Hour Wargames Wargames Factory