I must confess that this project has risen to the fore in the past week or so.  You could blame it on the fantastic games of ATZ we've been playing recently.  You could also blame the seamless way that ATZ will cross over with NUTS! to allow us to meander into Weird War Two.  You may blame those lovely Verdammten Nazi Zeds from Studio Miniatures.  You may also blame Warlord Games for their lovely new SAS NW Europe Sections.  Personally I'd blame the lot. Although it was probably the sight of those SAS models that finally tipped the scales....

You see, the SAS were involved throughout NW Europe, quite often working in four man sections with local French Resistance cells.  They would target bridges, railway lines, supply dumps in order to harass and disrupt the enemy.  They would continue this role throughout Belgium, the Netherlands and into Germany itself.  A single four man patrol mounted in Jeeps killed or wounded sixty Waffen-SS men, destroyed a truck and two staff cars in the village of Les Ornes in France.  These SAS attacks would inflict almost 8,000 casualties, capture nearly 5,000 prisoners of war, capture or destroy around 700 vehicles, destroy several trains and cut over a hundred railway lines.  It is impossible to confirm how many Nazi troops were diverted and disrupted by their actions.

It therefore seems an obvious choice to use two SAS sections as the troops who discover the Nazi's terrible secret: the release of the deadly Zed virus to keep the Allies out of Germany.  I suppose it was one way to try and establish a thousand year Reich. Silly sods.

I must hand it to the lovely gents at Warlord Games.  I placed my order for a set of SAS sections on Saturday, fully aware that the website said these figures were cast to order and would therefore take longer to dispatch.  You can therefore imagine my surprise when they arrived in the post just a few days later.  And here they are, laid out on my no expenses spared work station... Oh, who am I trying to kid?  It's a bin bag laid out on a corner of my dining table.  Like many of the Bolt Action miniatures, they have separate heads. 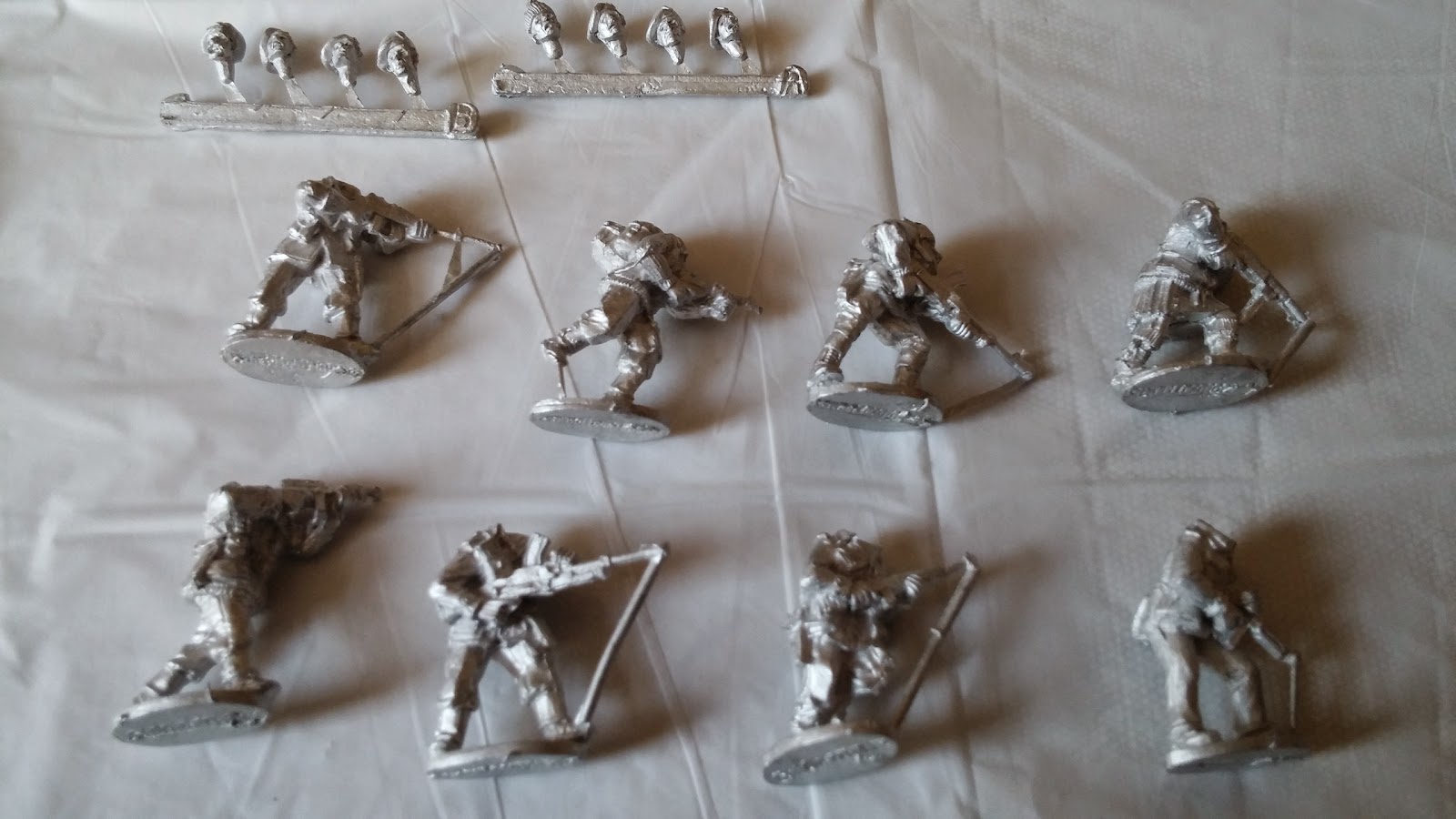 It was very nice to work with some metal miniatures again.  And they had very little flash to clear.  Here's a shot of the eight models assembled and based on Renedra's 25mm circular bases. 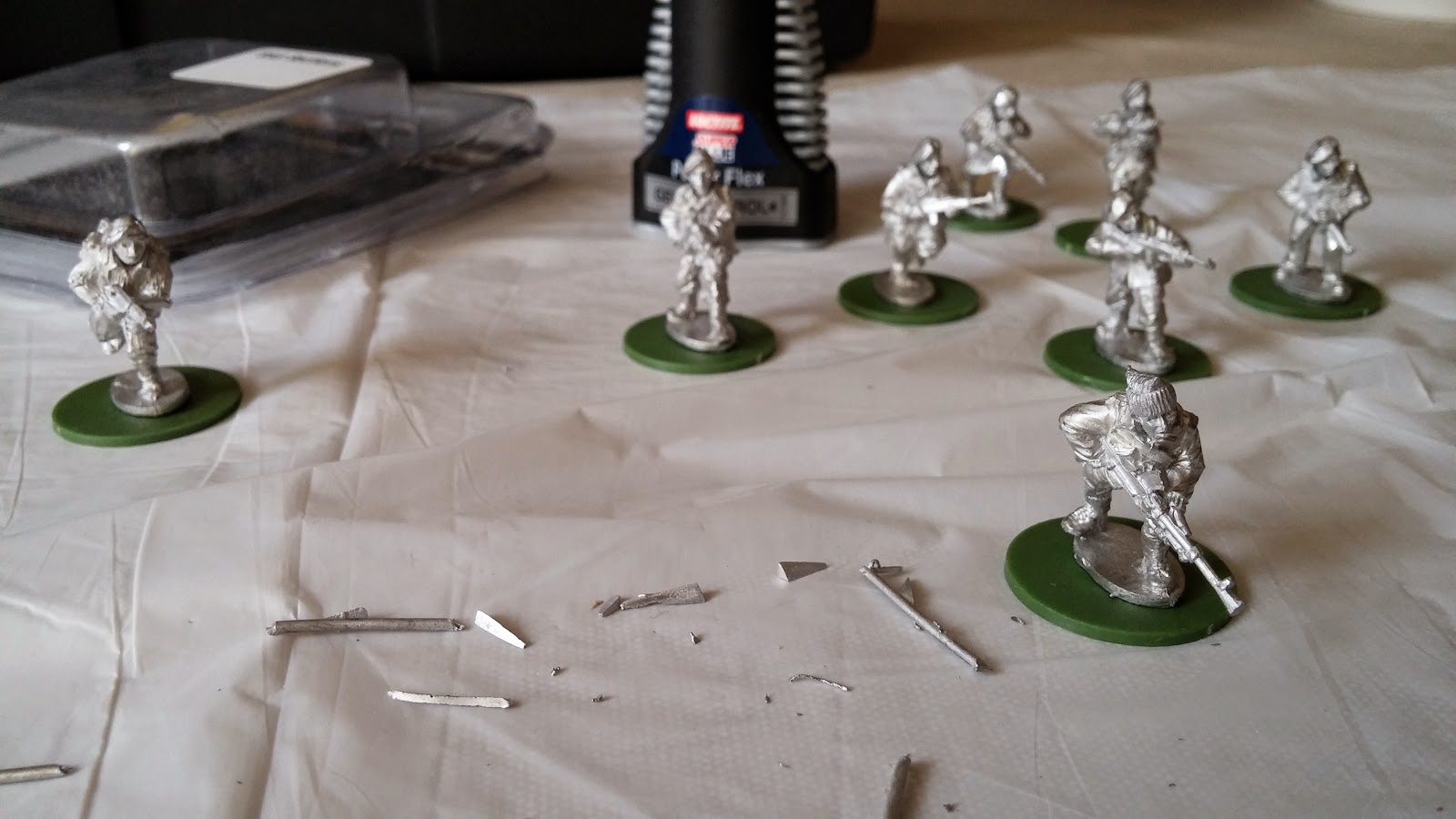 Once they had been given enough time to dry properly, I set to work on their bases.  You'll notice the proper super glue in the above photo.  This was used to stick the models together and stick them to the base.  But that was not used on the basing materials.  No, not I.  I wanted to use super glue.  Mainly because it works better than PVA.  I've used PVA in the past, but with mixed results.  I find it has a habit of sticking everything together until it comes to painting.  Then the basing material seems to slide off the base en mass.  So instead I used super glue.  And not the expensive sort either.  The really cheap stuff that you get ten tubes of for a pound in Poundland.  And its best saving up your models to do this in a single session.  Because that cheap super glue has a tendency go solid between uses.  Or glue the lid to the tube.  And then go solid. 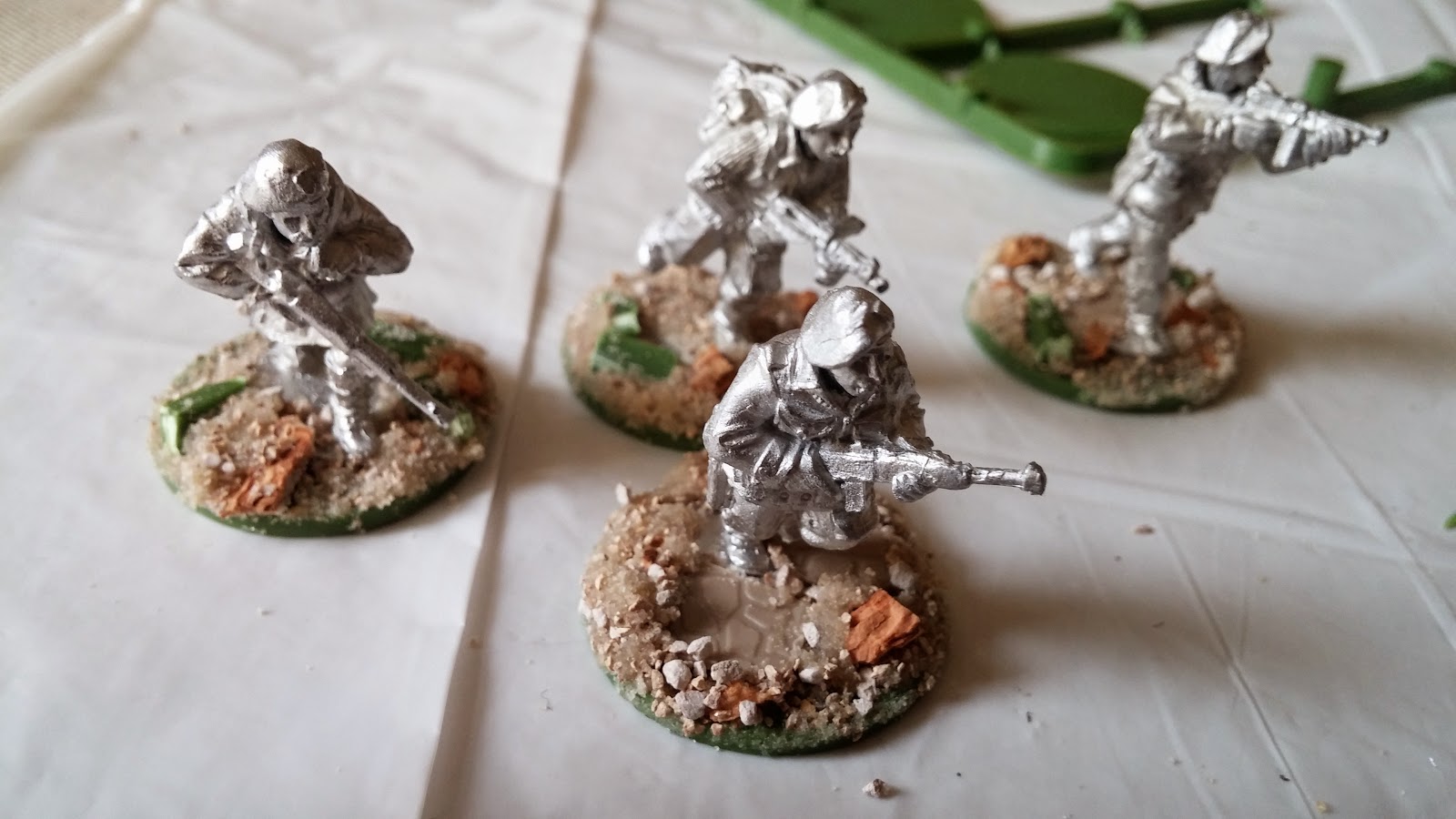 I've used some off cuts from a sheet of plasticard with a cobblestone pattern on it.  These are random shapes which look rather ridiculous, but when surrounded with the bits of sprue cut to look like bricks, bits of cork and my rubble mix made from sand, fine and medium ballast, somehow seem to look great.  Any exposed sections of the metal base will be covered with flock once all the painting has been done. 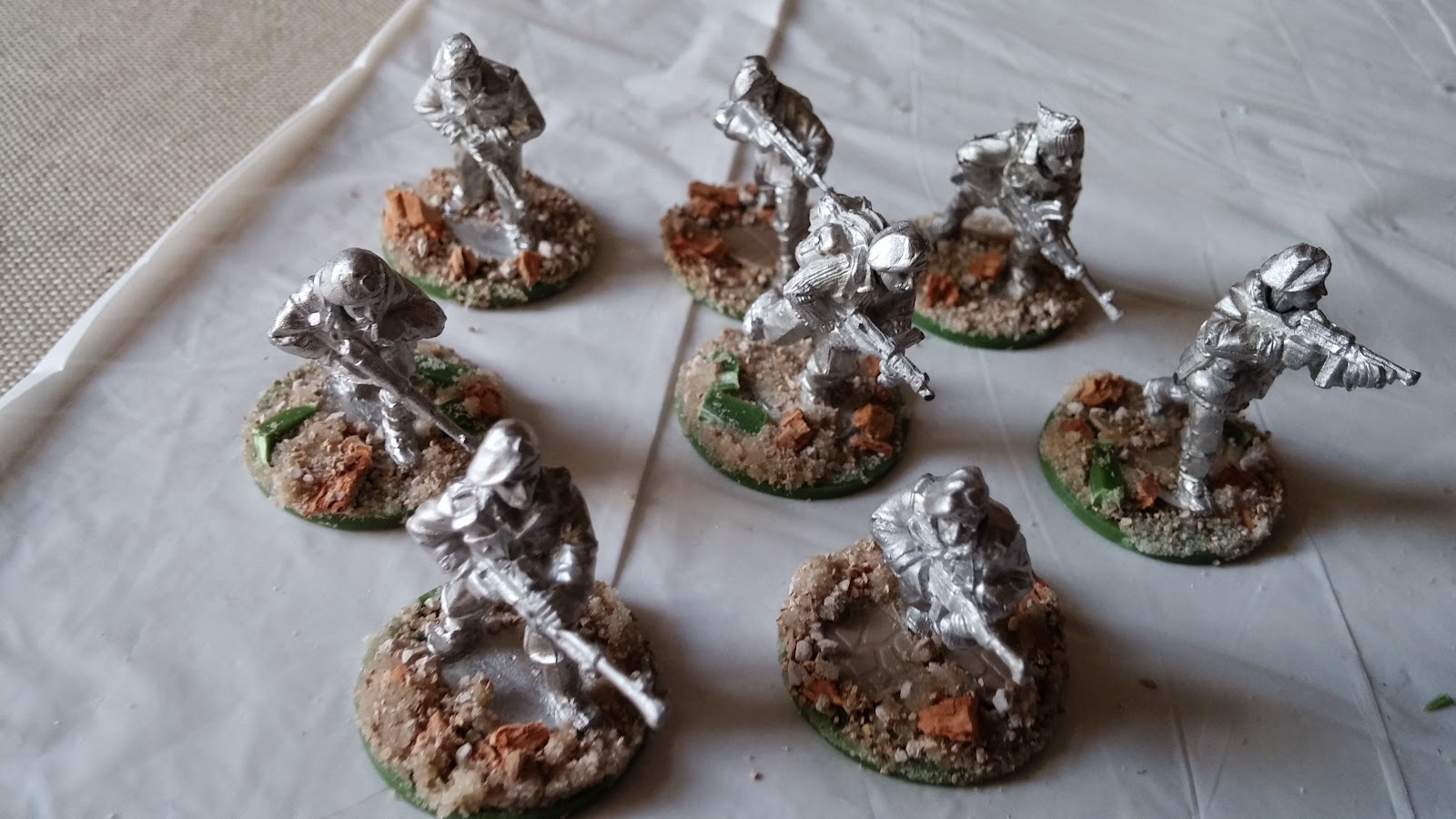 And finally, here's the aerial view of the models revealing the bases in all their glory. 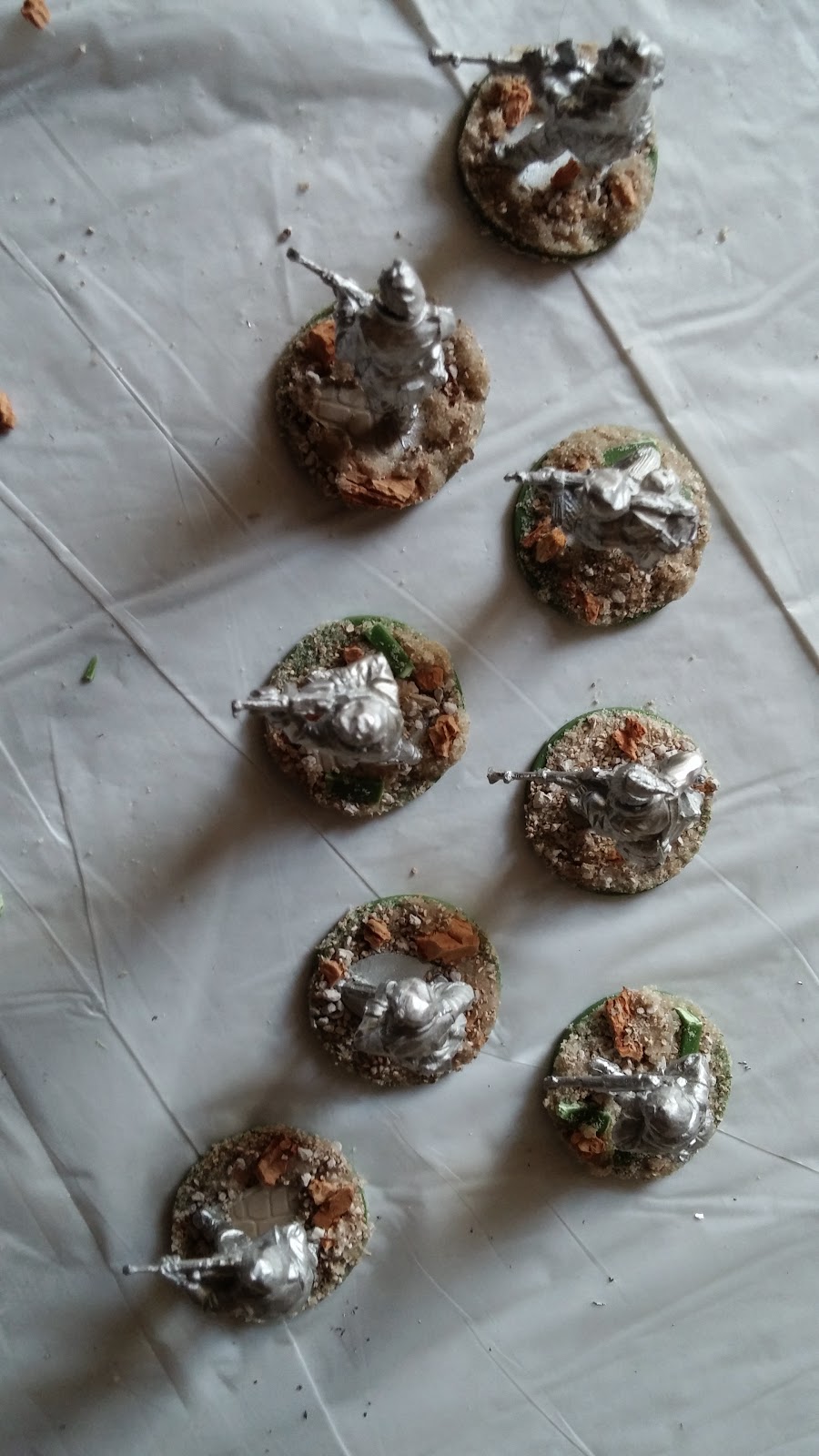