A belated Happy New Year to you all! 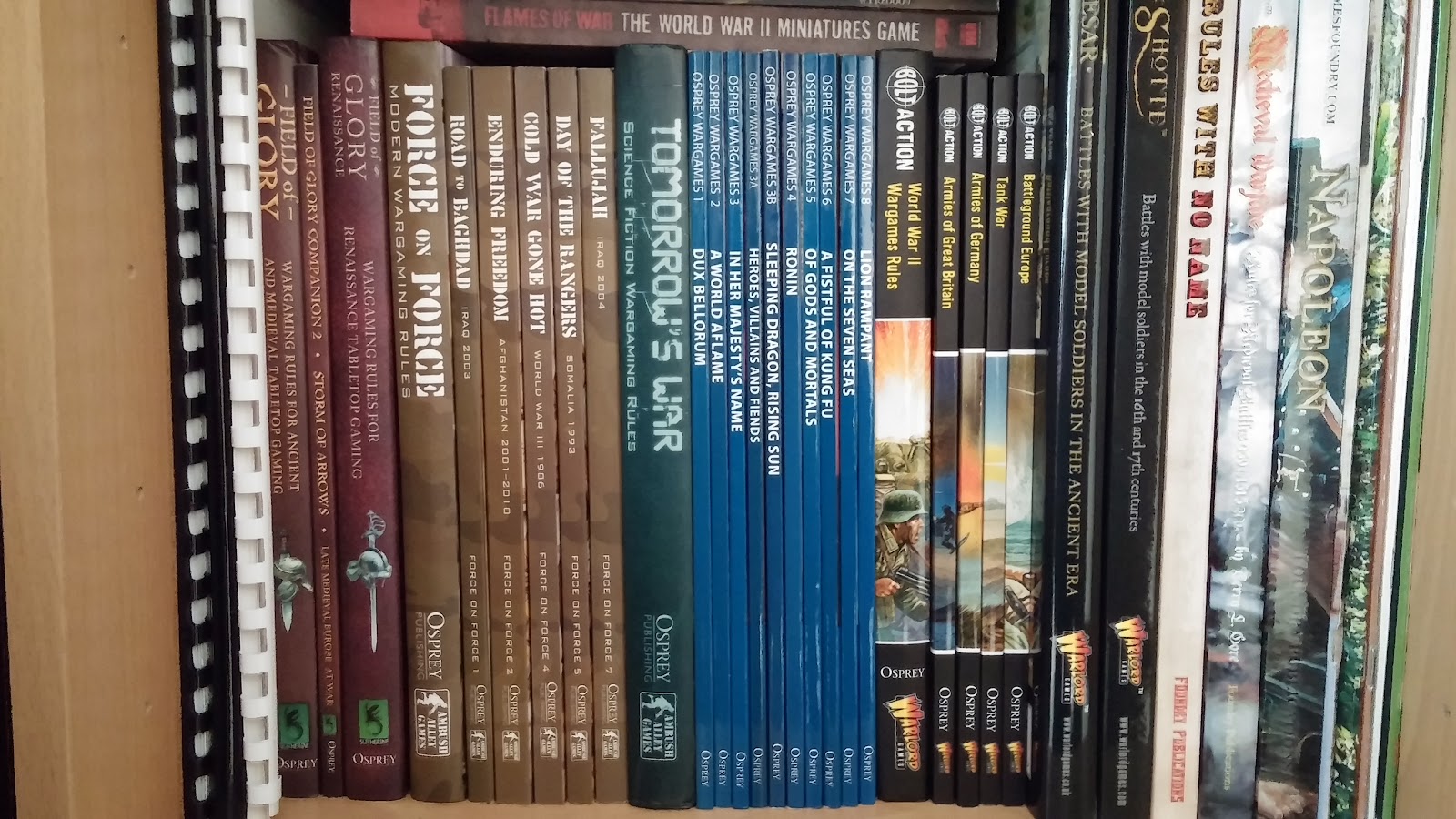 2015 finds me struggling with PBP (Pandora's Box Paralysis for those of you who haven't been following my blog for all that long).  I have a limited budget (basically zilch) each year for my hobby.  As you can see on my blog, I tend to make scenery from leftovers, particularly foamcore and cereal packets.  I'm actually quite proud of this, as I hope it shows how much can be done with so little.

Trouble is, we've just celebrated Christmas.  And as an autumn child, this means I have what I consider to be a substantial sum of cash in the form of present money.  It's probably not much compared to many of you out there in hobbyworld, but to me its nothing short of a small fortune.  Which at this time of year begins burning a hole in my pocket.  So much to choose from.  So many projects I want to get underway.

You see, I have been using my hobby funds to purchase miniatures over the years, gradually building up enough for armies for certain periods.  I've also been purchasing rule books when an online price has been right.

And 2015 looks like the year I'll be able to see a number of projects reach the painting and scenery making stages.  Of course, the problem with PBP is that I can't decide which to start first!!!!!!!  So, what are my choices?

Well, I'm already committed to finishing off Eat Hitler!  And I've begun making the Burbs as an alternate location for our games of ATZ.  Which has become a bit of a millstone around my neck, if I'm being perfectly honest.  Not because I'm having trouble with the design.  A severe lack of time is definitely a problem, but aside from that, my real problem is that I never looked at the rules closely enough.  Because when you do, you realise that as much as you thought going to the Burbs would increase your chances of finding survivors and making your gang remain viable, in the first years of the outbreak, it makes little to no difference at all.  Pleh.  But don't worry folks, this will be completed in the coming months.

Next up there's the ETO.  I intend to work on some Normandy scenery, focusing on a farmstead and some bocage.  But I've been taken a little further east in my plans.  Owning as I do enough Nazi Zeds, Nazi and British troops, I've decided to model some German buildings.  This will be useful for my Bolt Action gaming, but it also allows me to make some scenery for my NUTS!/ATZ Wierd War Two game.  My reasoning is simple.  If you're losing the hope of a Thousand Year Reich, you get desperate and allow the boffins to release a virus that turns what's left of your army (and anyone else who gets in the way) into Zeds.  Which are also easier to control.  It's win, win, win all the way for those Nazi twats...

I've owned Force on Force for a long time, but never had the opportunity to play it.  Mainly because I don't know anyone else who has the rules.  That and my lack of army or scenery.  But this is all changing!  I decided to start with Fallujah 2004, and am delighted to say that I have purchased a USMC force from Elheim.  This is a new scale for me to venture into, and I'm really looking forward to both the miniature painting and scenery making for this game.  It also allows me to scour online and physical model shops for 1/72 vehicles....

Then there's my desperate desire to play Napoleonics.  Unfortunately, if you take as long to paint one figure as I do, this is almost a fools quest.  But I have decided I will not be shaken!  And even if I don't manage to all the figures suggested in The Complete Fondler, I will be playing Sharpe Practice at some point in the future.  So all those Victrix and Perry Miniatures will be used!  (I'm actually well chuffed to have this back on the list!)

I'm also stepping back into the dark ages with Dux Britanniarum.  I own a Saxon force already, and I hope to purchase a Romano-British force in the coming months.  Of course, scenery projects will follow in the wake of this one too!

And don't forget my ECW miniatures.  I love this period.  And I love the miniatures I have for it.  And as much as I'd love to play Pike and Shotte, the reality of painting that much is really not that feasible.  I'm actually looking forward to using them with Spanish Fury and Tinker Fox from the Perfect Captain.  I love the stat cards for this game.

So all in all, there's a lot of stuff.  And if I tire with one project, I'll simply move on to another.  I know this means it'll be a long time before any of them are ready to game, but that way I can enjoy painting whatever I'm in the mood for.  And that way I wont hum and ha and fritter away what little time I have.

So stick around!  This could be quite an interesting year!

Oh, did I mention all the lovely Perry Miniatures plastic Medieval figures I own and want to own?  I have enough for a force for Daniel Mersey's lovely ruleset Lion Rampant...