There'd have been even more if we had enough models!

To be completely honest, I was both looking forward to, and simultaneously dreading this game.  You may remember that our last session saw the decimation of my gang.  Only Gus, my gang leader remained fully functioning.  Baz had been killed off in our first game.  But last time Jenny was eaten in front of Alec who turned into a gibbering wreck.  He's not dead, you understand.  He's just incapable of any rational thought and sits staring blankly in the back of the RV.

We did manage to successfully rescue a whole new bunch of survivors though.  None decided to stay with Rick, Daryl and Carl.  I however got three new recruits.  This of course sounded great.  Until we randomly generated them.  First up, the Bazinator.  If a name sticks, just run with it.  He's a Rep 3 wimp with a chainsaw.  Guaranteed to bring the Zeds in their hordes and run away screaming like a little girl.  Next up, Kendra.  Die Wampire Slay-ah.  A brawler armed with two one handed blade weapons, she'd be great.  If she wasn't Rep 2.  And finally, we have Pam, who honestly looks like she belongs in a 70's movie.  Don't blame me, I didn't make her.  She has two BAMPs, a bucketload of attitude, Rep 3 and...wait for it... she's clumsy. 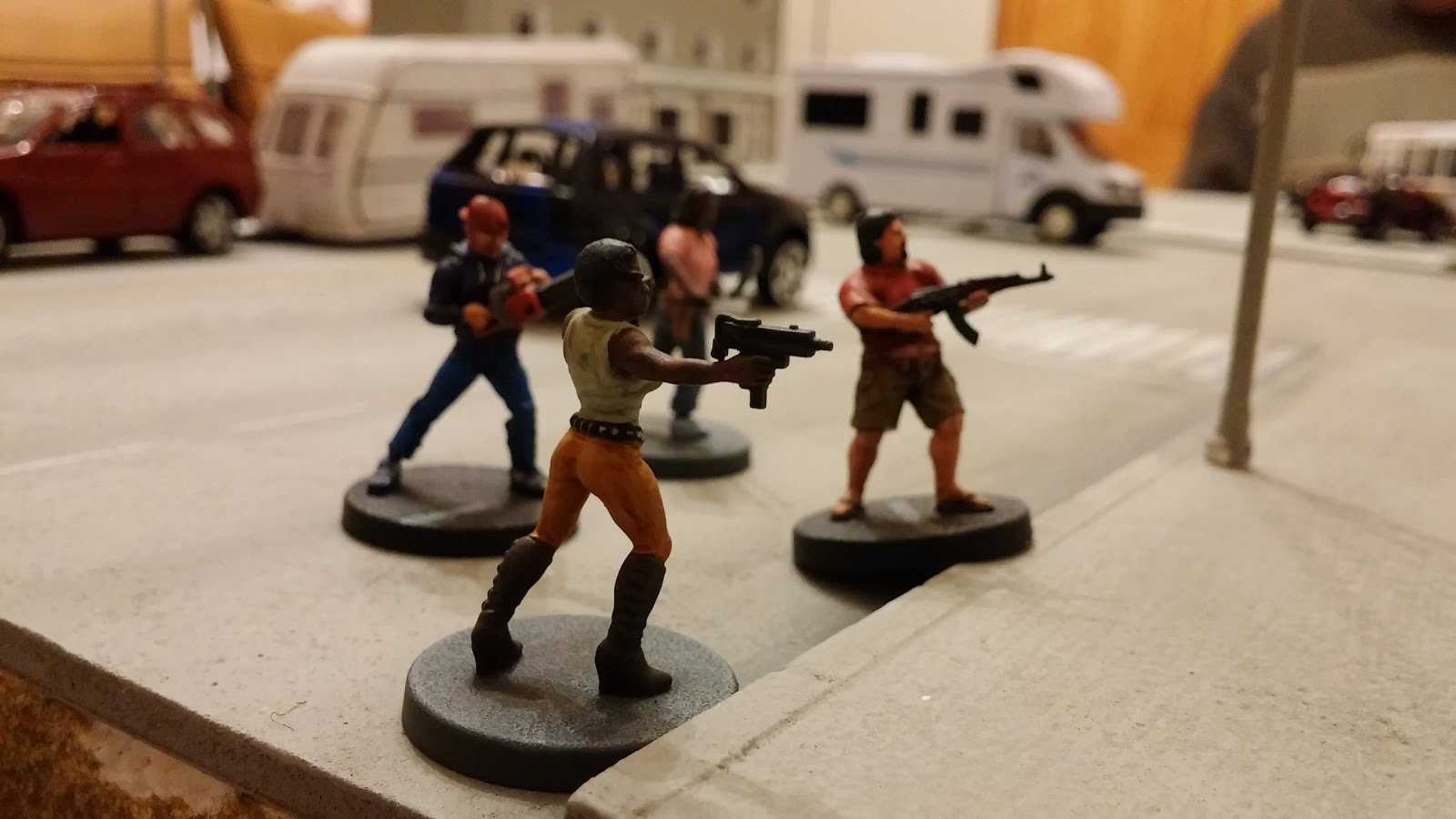 That's my gang at the start of the game with the RV in the background.  From left to right, the Bazinator, Pam, Kendra Die Wampire Slay-ah and Gus, who at this point is thinking of giving up already.

We set up on opposite sides of the board whilst Alec sat in the back of the RV with a pair of y-fronts on his head, a pencil up each nostril and a 'wibble' on his lips.  The RV was positioned in the centre of the board ready for a sharp exit if things got bad.  With my new gang, I couldn't see how it wouldn't! 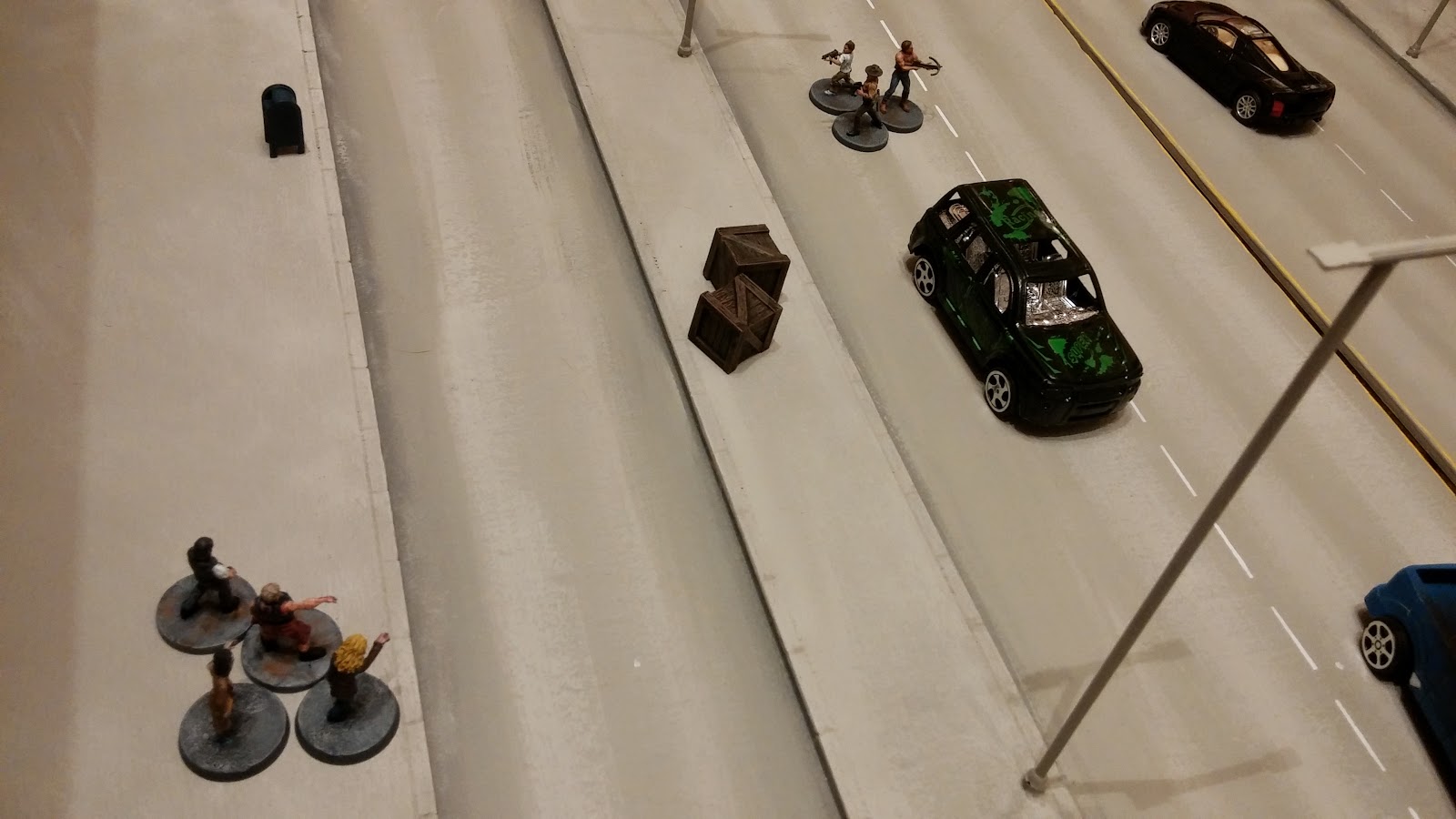 The above photo shows Rick, Daryl and Carl's start position.  We moved our 8", rolled for our ZAL and ended up with 10 Zeds, five on each gang.  Rick's gang found the way blocked to their intended building by four Zeds. 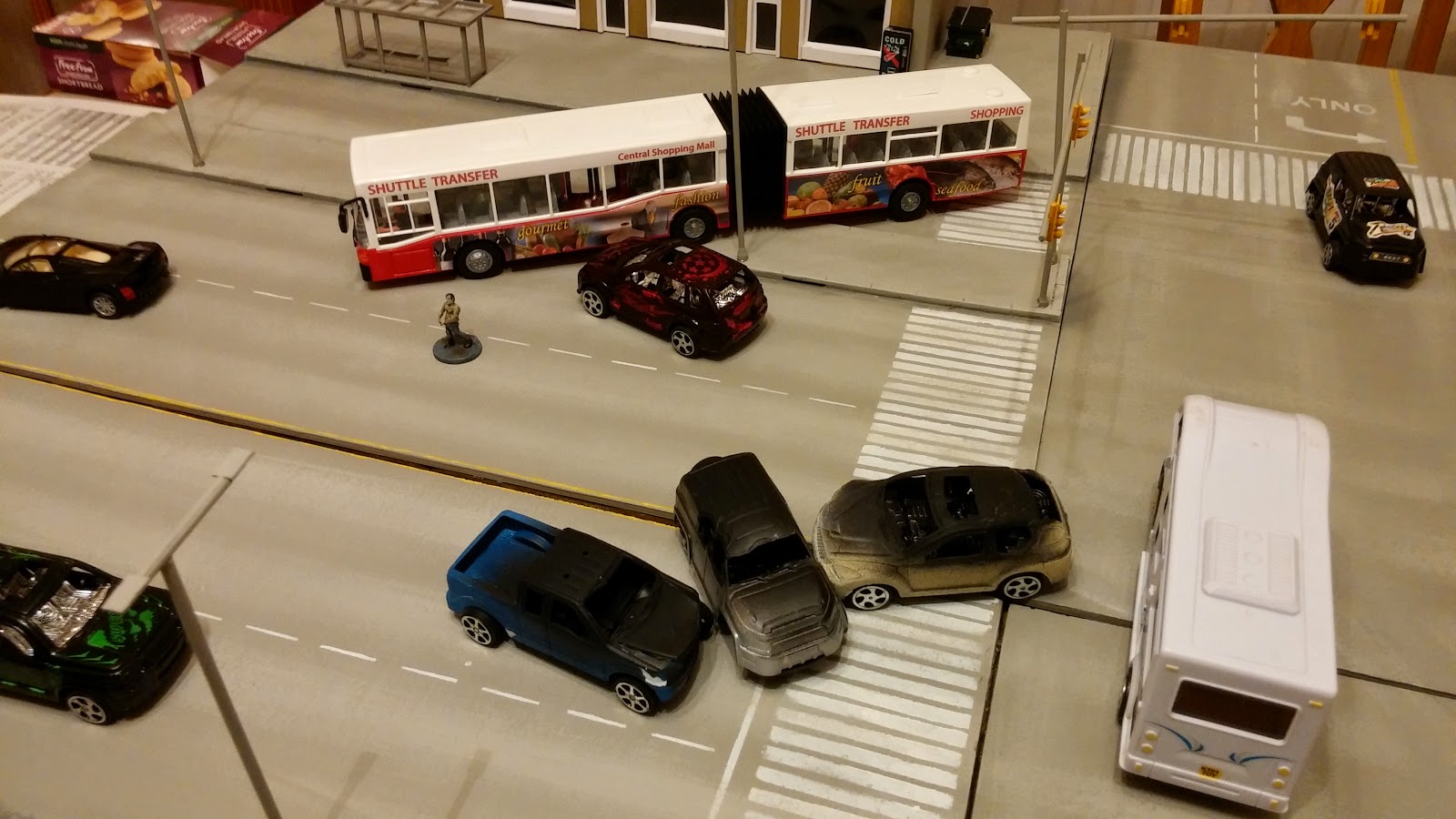 There was a solitary fifth Zed scurrying around in the background.  Daryl shot at it and missed.  We began to hope his bad streak would end soon.

I on the other hand had more Zeds behind than in front.  One stood in the way of the police station we were intending on searching.  In true style, Pam raised both her BAMPs and let rip.  Six shots.  She wasn't quiet, but at least she turned the Zed into red mist before her.  She only managed two out of the six hits.  My gang was going to be noisy. 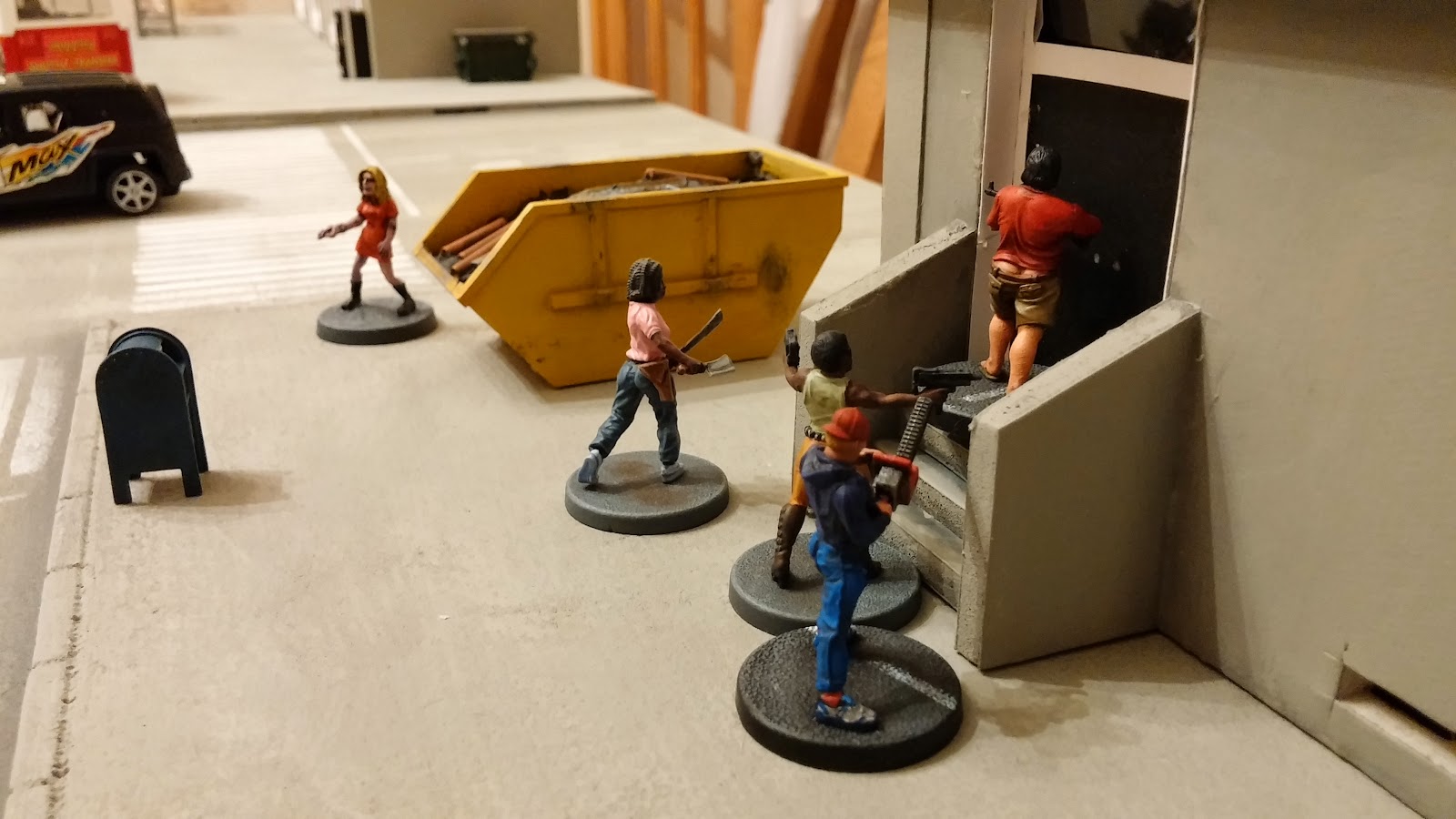 For some reason, we managed to find a magical dice.  The black dice we had picked to represent the Zeds in this game seemed to keep rolling sixes.  Because Zeds only have a Rep 4 (note, they are more alert than 3/4 of my gang!!!!!) this meant they failed to activate turn after turn.  Whilst this would normally be a good thing, it was beginning to freak us out for reasons that will soon become apparent.  That female did assault Kendra Die Wampire Slay-ah though.  And against all expectations, Kendra actually managed to slice and dice it.  Well done Kendra!  I never knew she had it in her! 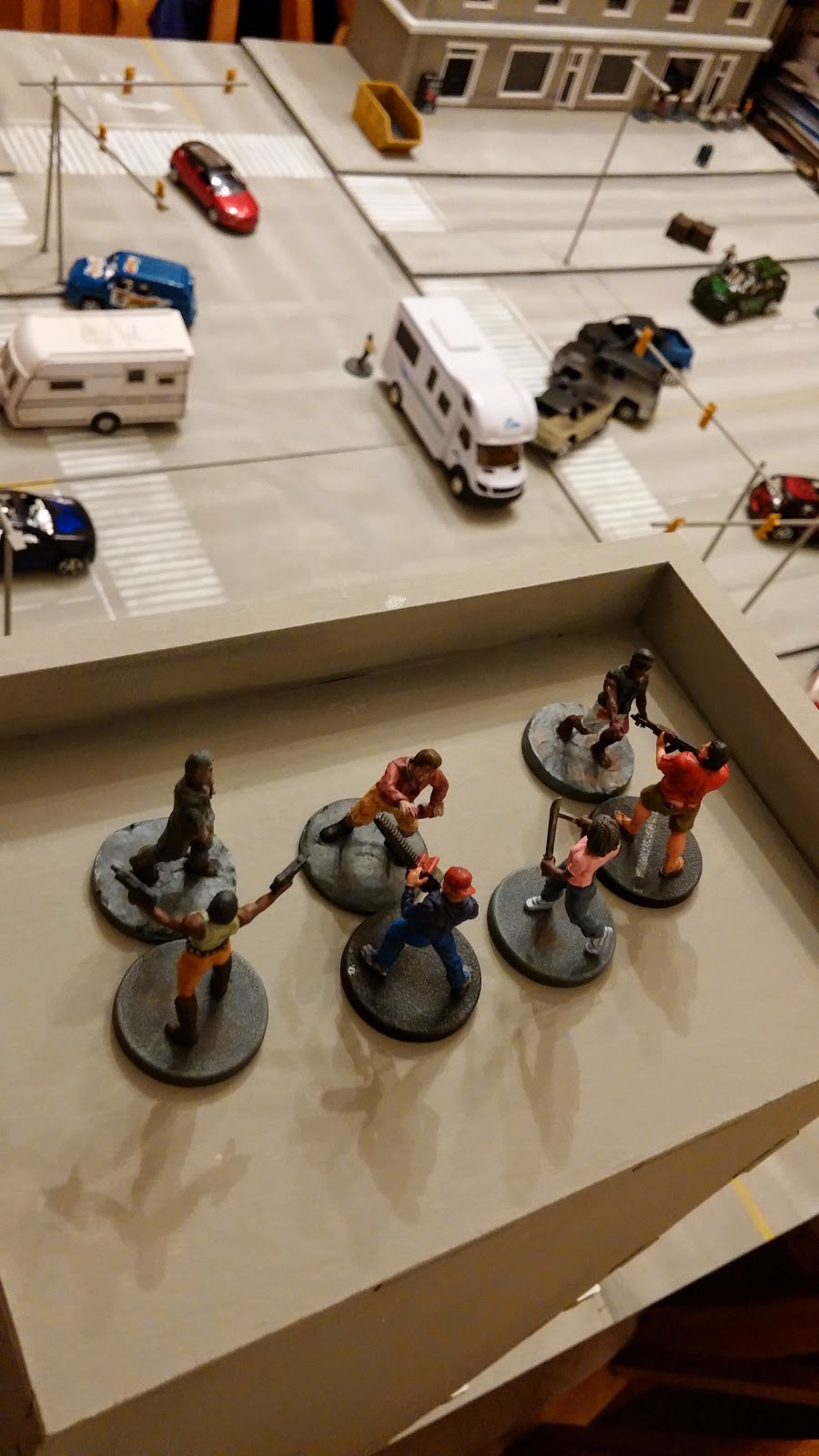 My gang entered the police station while Daryl kept shooting and missing Zeds at the other end of the board.  The above photo shows the arrangement of my lot when, surprise, surprise, we found Zeds and not survivors.  You'll notice that Kendra wasn't doing much slay-ah-ing...  To be honest, for a few turns we kept getting stuck in a stalemate or knocking them back and failing to pop the weasel.  And every turn this happened, the BAMPS were adding 6 potential Zeds a turn.  As was the Bazinator's chainsaw.  Even Gus joined in a couple of times, firing his assault rifle.  And thanks to all the 4+ rolls I was making, the crowd of Zeds outside was growing. 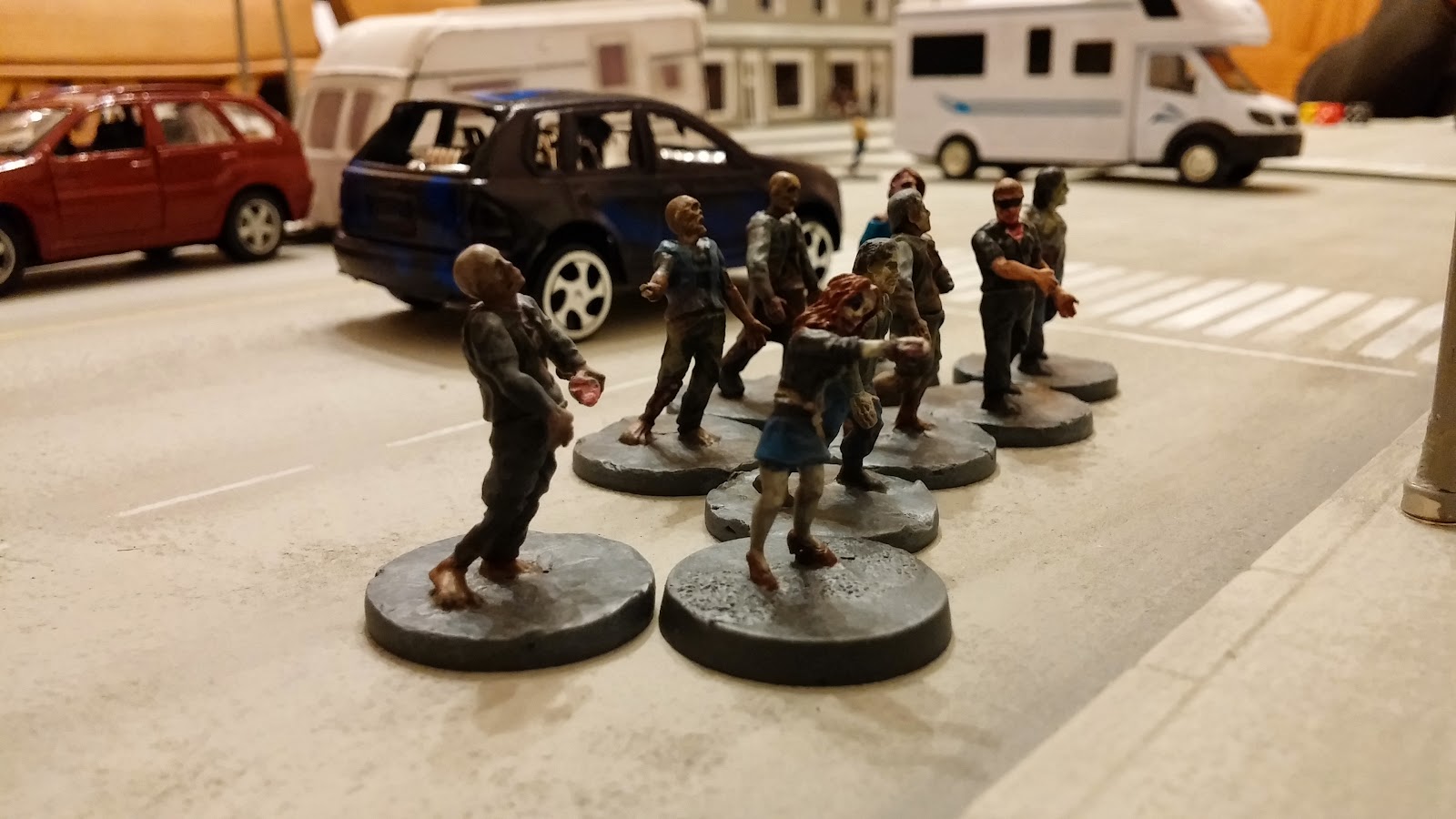 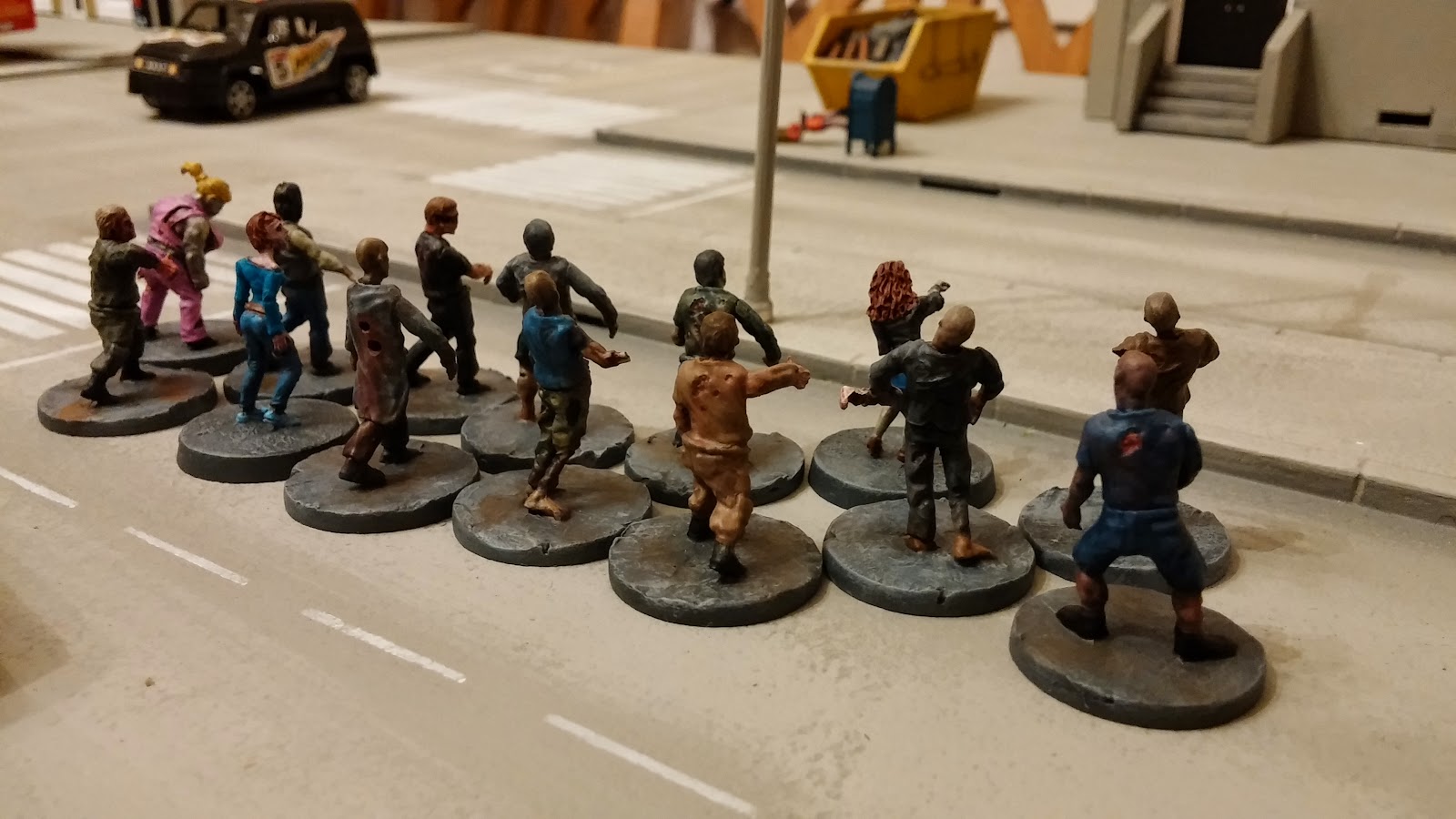 It wasn't much better at the other side of the board, either.  We randomly generated the ground floor as an office.  This meant +2 for the Zeds and -2 to the chance of encountering humans.  Which meant that the Zeds would pass a D6 roll of 8 or less, and the humans a 2 or less.  That'll be Zeds then.  Thankfully though, when it came to finding out how many Zeds were there, the dice rolled low and there weren't many.  Once they were dispatched, they managed to find a set of car keys and boldly went up into the apartment block.  Gee, I wonder what happened.

This is what happened!  Seven Zeds.  Oh, dear. 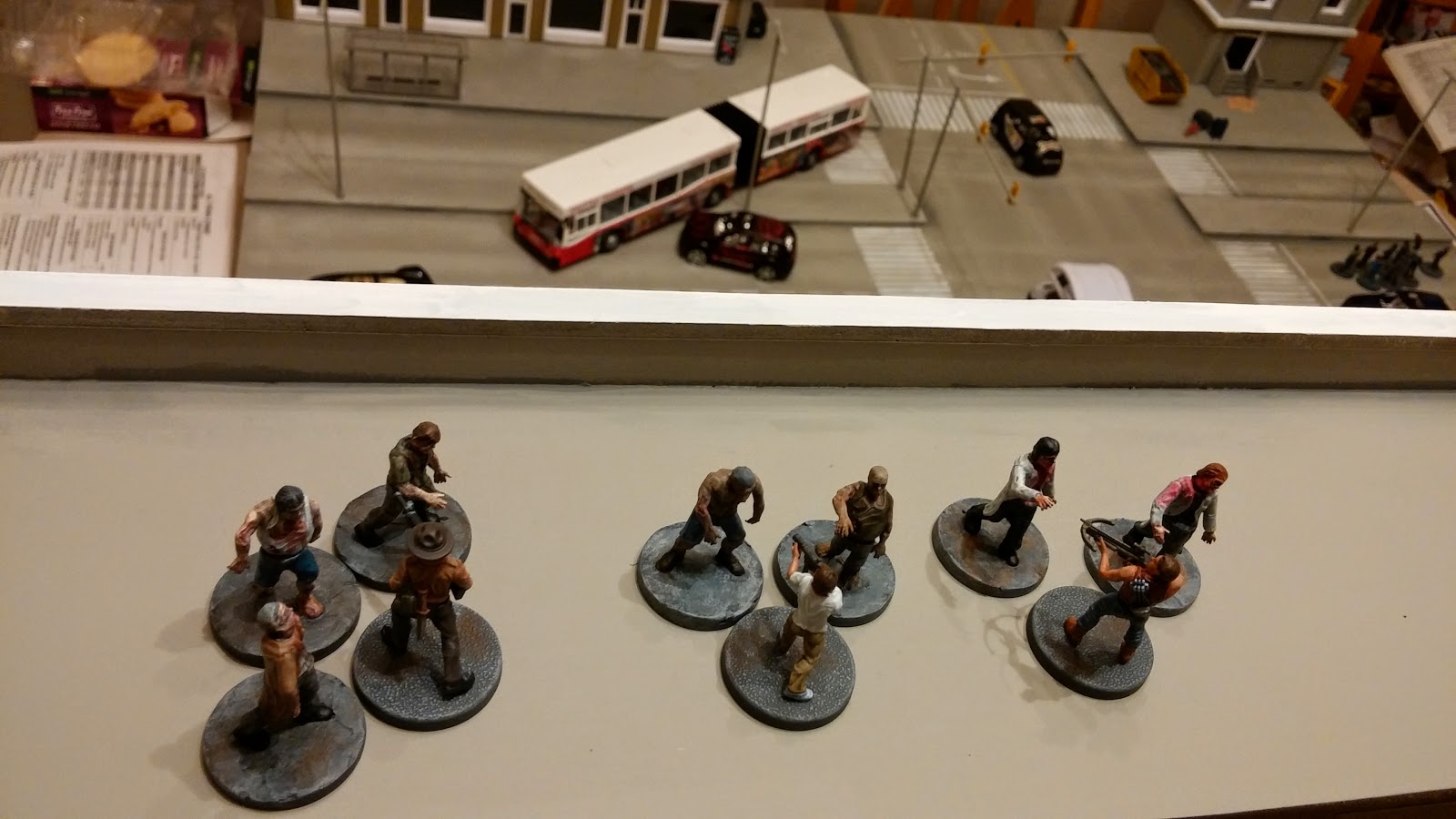 Three on Rick, two on Carl and two on Daryl.  This didn't look good.  And it wasn't.  Every opportunity given by a knock back was taken and shot after shot hit the Zeds but failed to OD them.  But it did generate some onlookers who were gathering downstairs rather ominously... 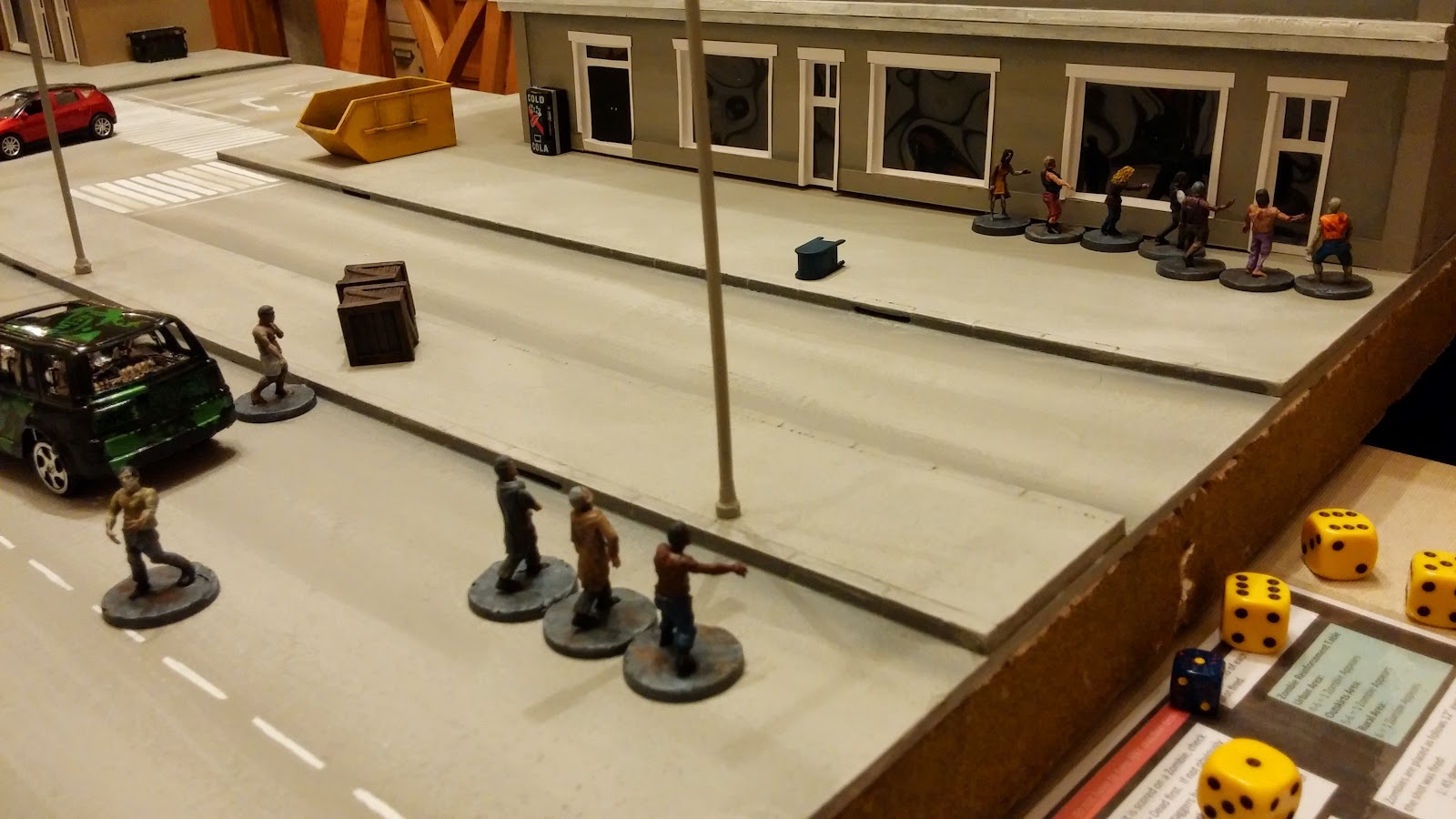 Apart from that one on the left.  He bumped into the car and wandered off all disorientated.

Meanwhile, at my side of the board, that Zombie crowd was beginning to look like a horde. The only hope we had was to finish off the combat quick and get away before the Zeds stopped rolling sixes and blocked our only exit.  And yes, the black dice shows how many more Zeds we needed but didn't have models for.  I think at this point I was making Butch and Sundance references... 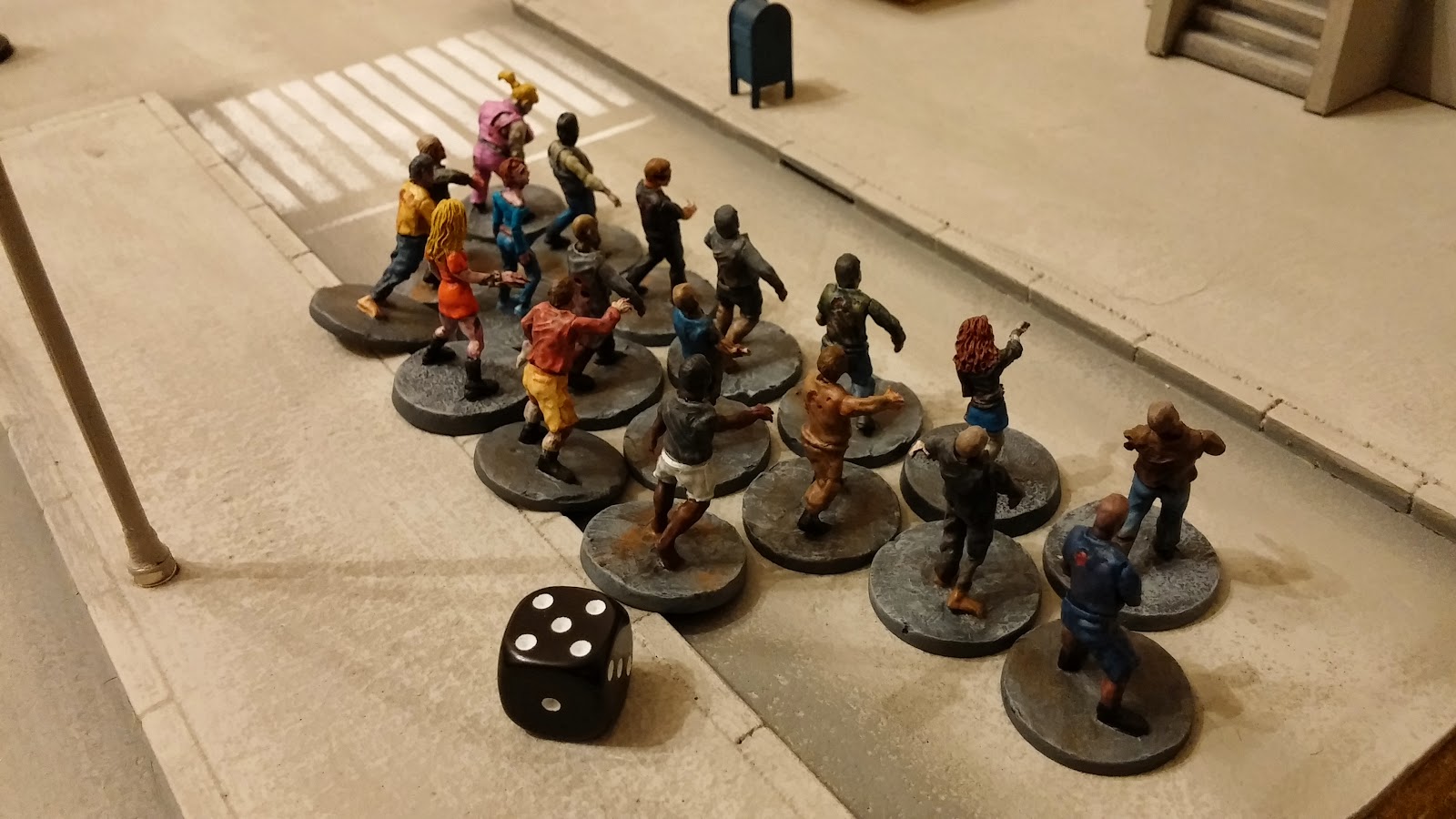 Finally managing to kill the Zeds and recover body armour for Gus, medical supplies, another pistol and keys to a car, and with the Zeds still rolling sixes, we made a dash for the RV 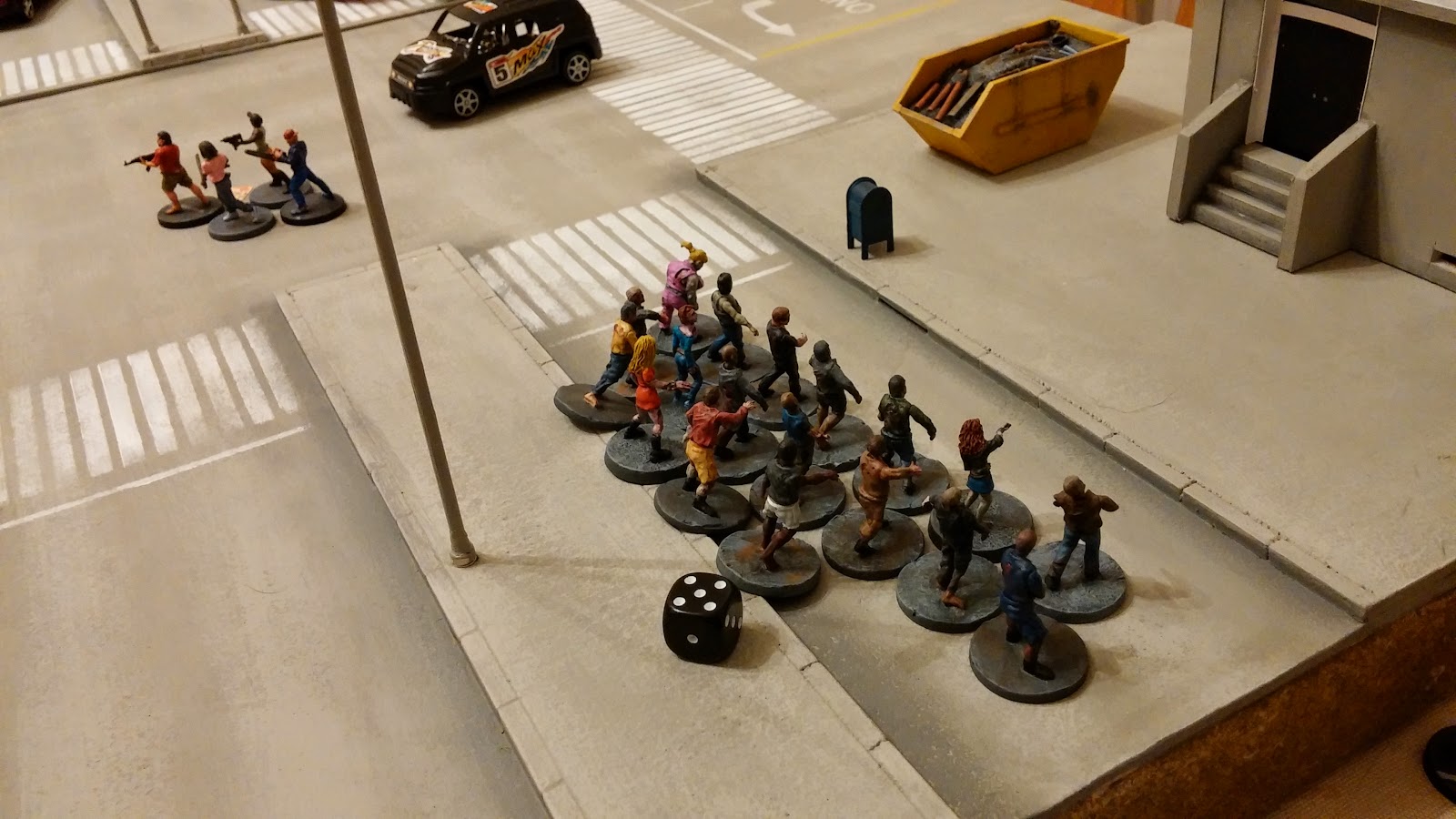 Carl had been knocked out of the fight and two Zeds were about to begin feasting on his flesh.  Rick was still locked in combat, and Daryl killed the last Zed on him.  He turned to fire on one of the Zeds but missed.  Sadly Carl was eaten.  Rick passed his see Zombie Death reaction roll.  Daryl didn't.  He ran back down to the office.  We don't know if it was the gathering horde of Zeds pressing their faces against the large glass windows that did it or not, but Daryl was allowed a Rally check in the next turn and he passed with flying colours.  He turned round and went back to the apartments to help Rick. 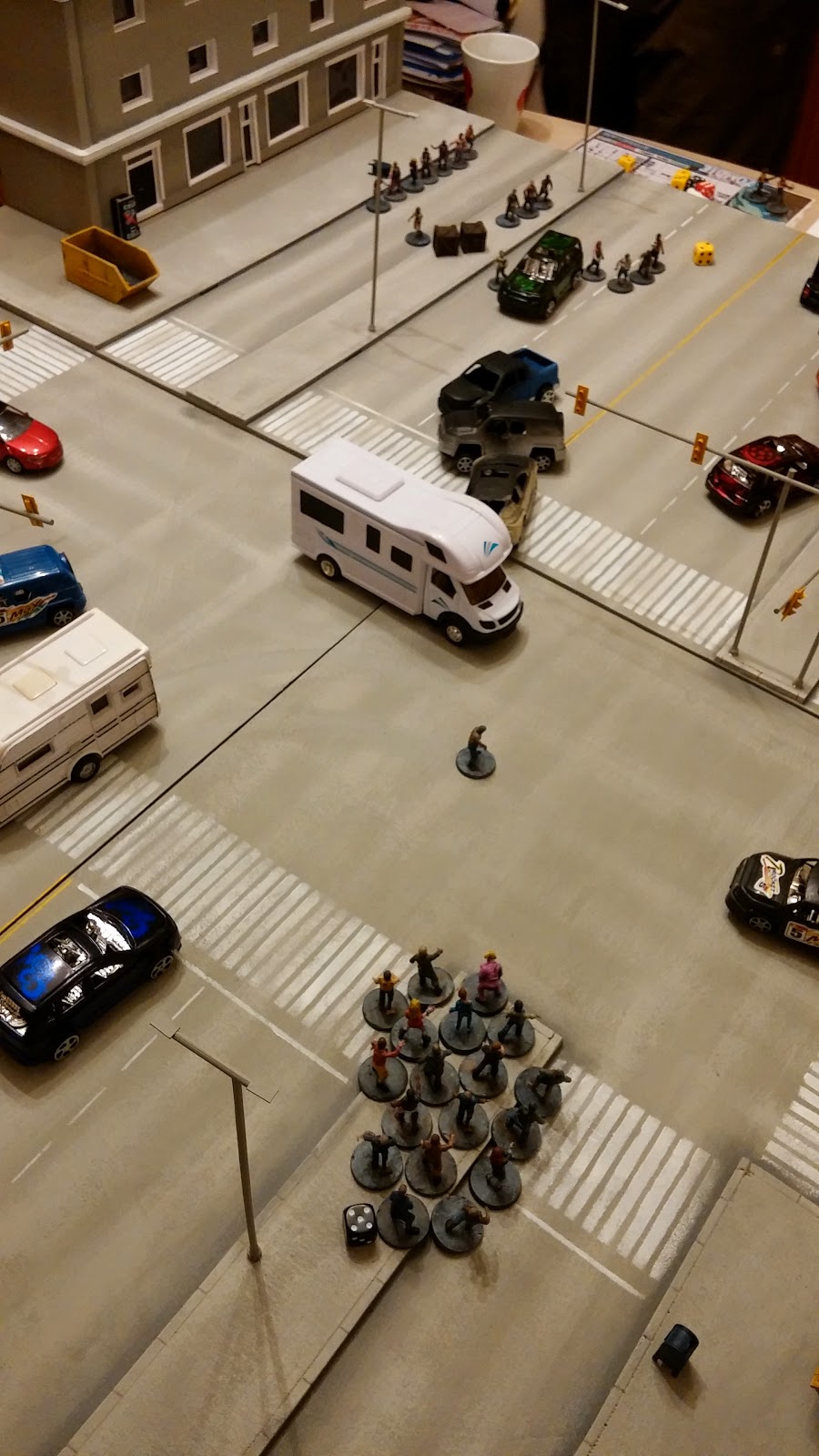 Barely escaping with their lives, Rick and Daryl killed off the last of the Zeds, found some medical supplies and exited the apartment.  They fired a couple of shots at nearby Zeds, and the others turned to follow them towards the RV... 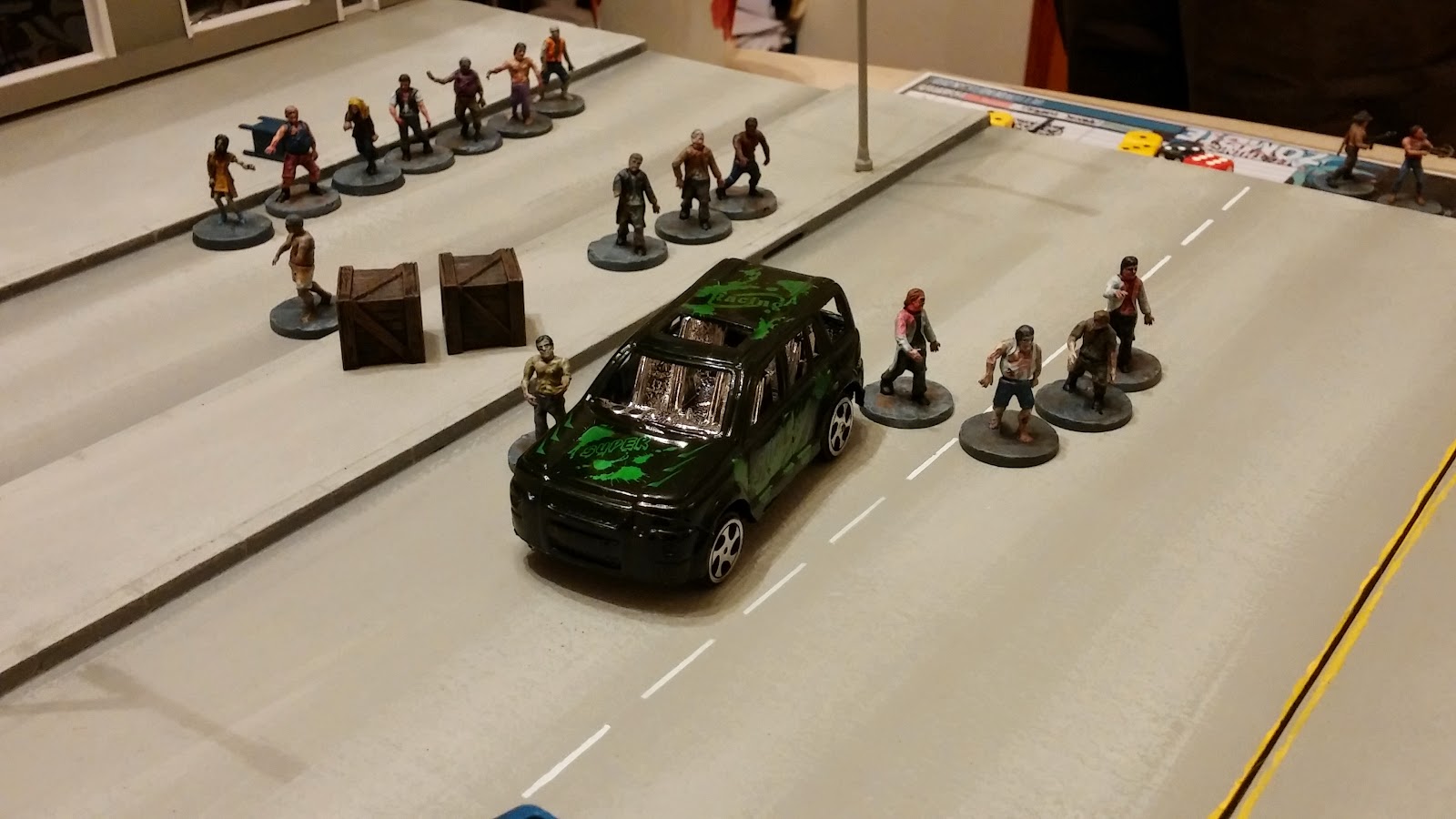 Just to remind us how fallable she can be, Pam face planted herself in front of the RV.  The Zeds were starting to move.  It would all come down to the next activation roll. 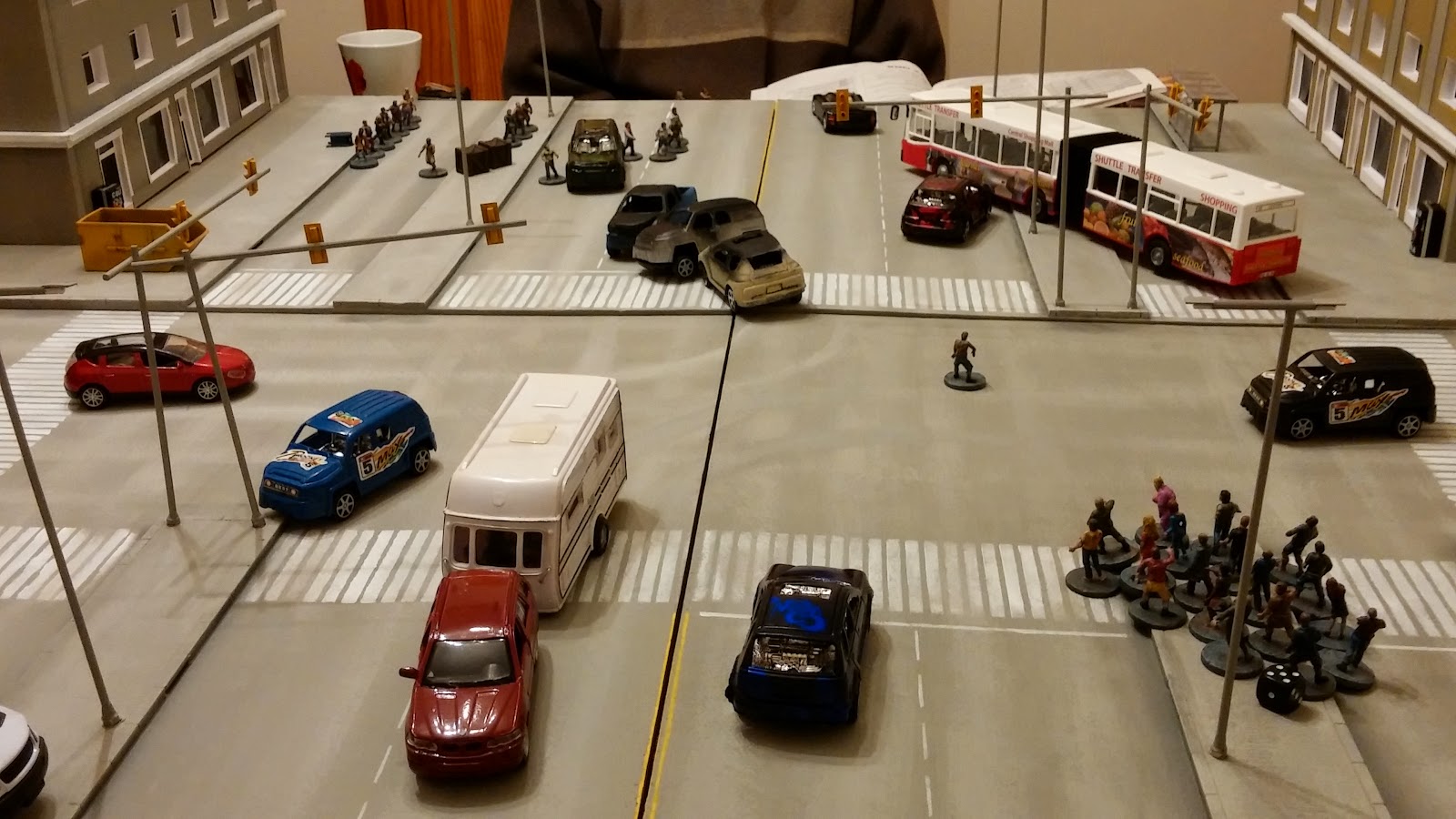 Thankfully Pam was able to pick herself up and get into the RV along with Rick and Daryl.  The news hit Gus hard and Rick dashed to the driver's seat, fired up the engine and they all roared off the board.

Once again, a brilliant game with lots of narrative produced by the reaction rolls.  It's quite an addictive game this!
Labels: 28mm All Things Zombie Modern American City Wargaming Two Hour Wargames Zombie Apocalypse Wargaming