Building the Burbs: The Journey Begins

Well, so far its been all about kerb stones and driveways. Yup, all the planning has focused on relative heights. This is because I want to use these two boards with those used for making the modern city, so things have to match. Necessary to plan, but hardly exciting stuff, is it? Has to be done though, because many photos I've seen online of the Burbs has the buildings raised higher than the street, giving them sloping driveways to their garages.  This is all well and good, you understand, but it poses a problem.  Real cars have hand brakes.  Die cast toy cars don't.  So if I don't level out the driveway somehow, every parked car won't stay parked for very long.  Now we can't have that, can we?  However, I think I've got it sorted... 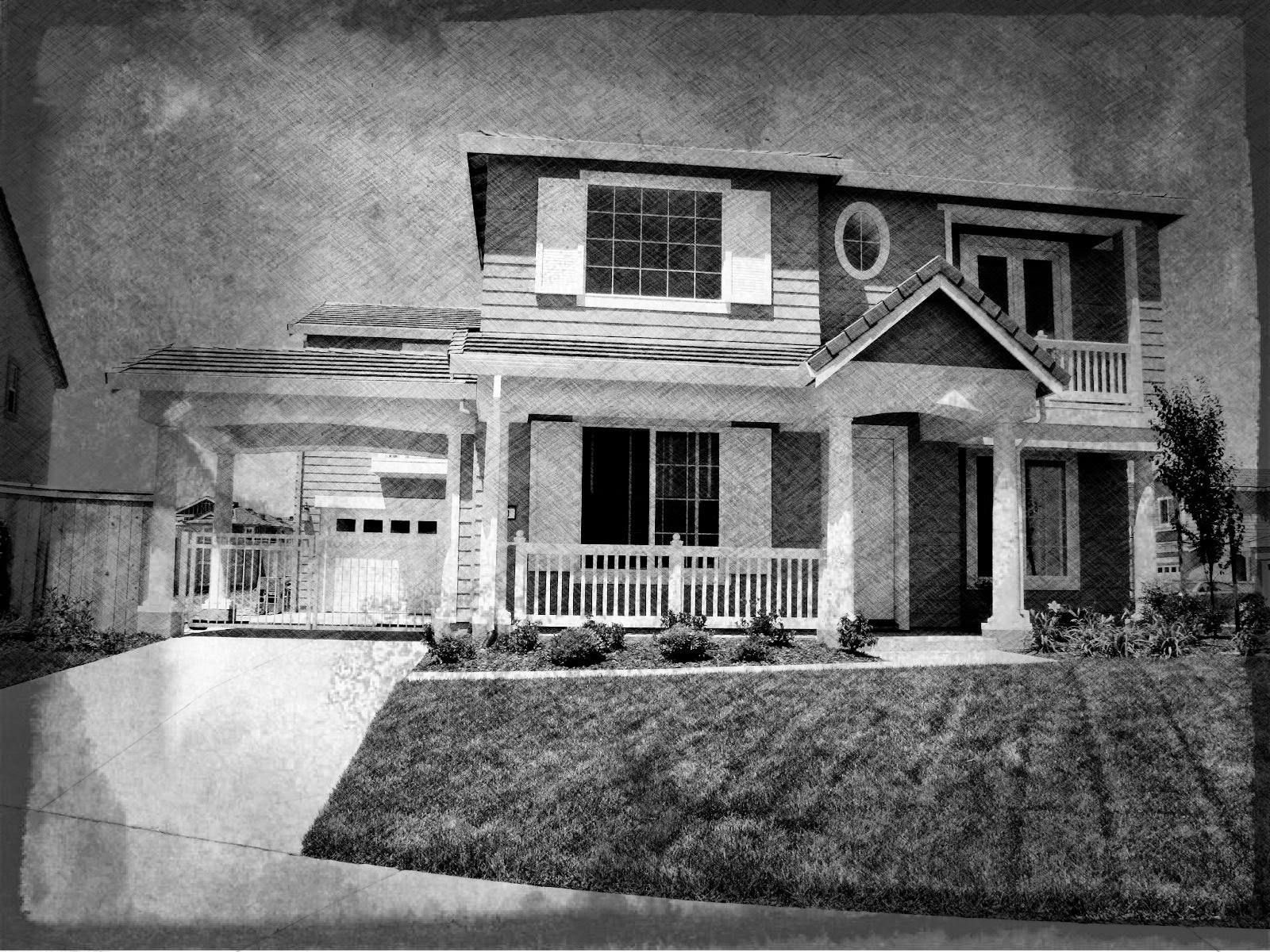 So at last it's time to move on to something practical. Namely, making the thing! Which means starting quite literally from the ground up. Why, I hear you ask. Well, to put it simply, it seemed like the best thing to do. Honestly. If I were making some drop on terrain, I'd just bash on and make it, paying attention to the correct measurements and scale, but not needing to worry too much about its overall footprint. These things don't matter when they are designed to be placed anywhere on any gaming surface.   But when it comes to making specific boards with a definite brief, I tend to find that starting from the ground up is the best way to go. After all, I want to make sure everything fits. And because I'm going to be making some partial buildings for this one, its an absolute necessity to make things this way. Particularly because this is the way my mind works. Once I see things in front of me I can start working on all the problems my mind overlooks in the planning stage. 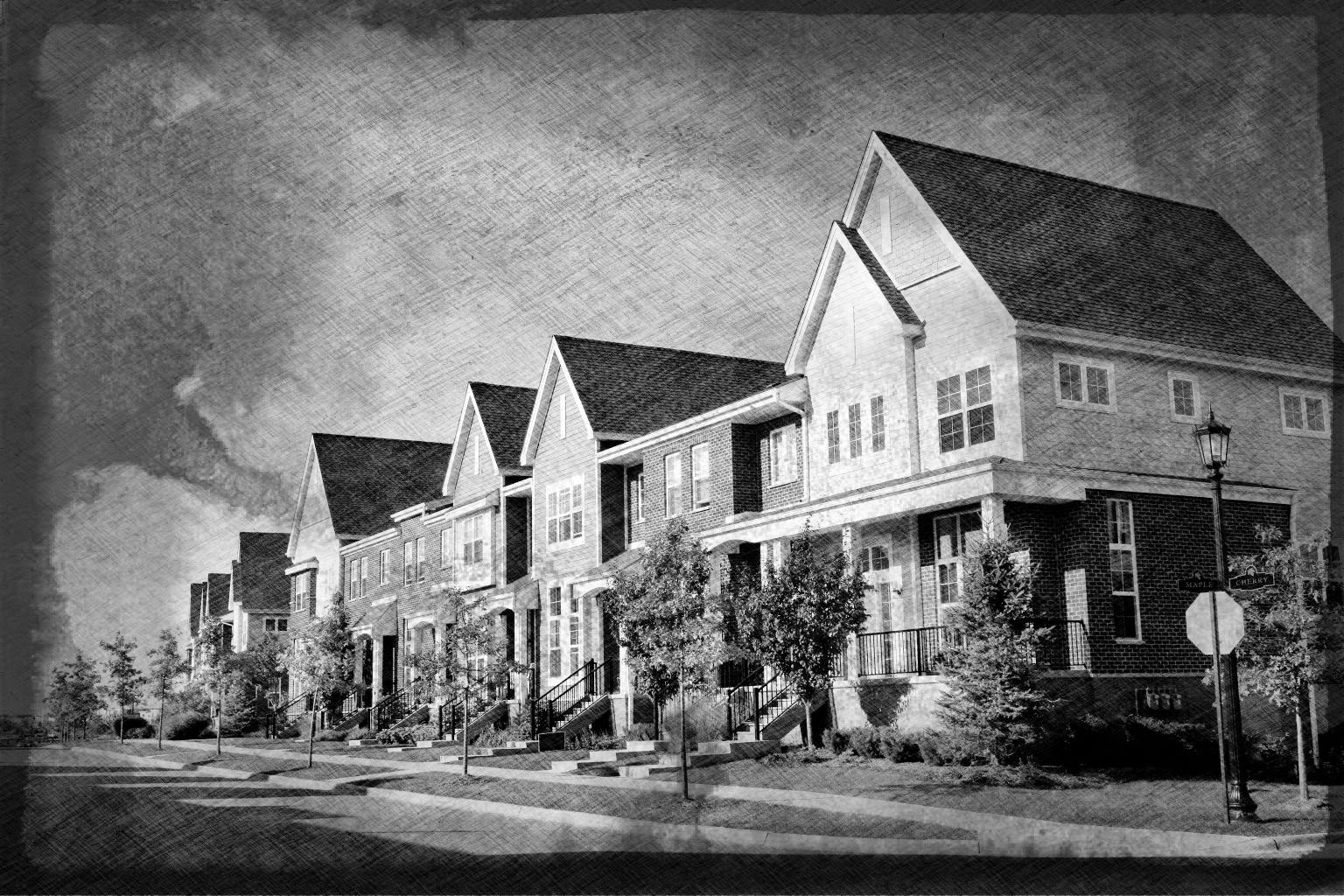 Oh, don't get me wring.  I think it would be great to have the mind of an architect, figuring out everything meticulously on paper before starting the physical construction. But I don't. Having said that, I'm guessing that like me, you've seen yourself building a model kit according to the instructions only to discover that that sequence proposed by them makes the construction impossible. This is equally as true for flat pack furniture.  So over the years I've learned to have the correct method, and allow for unforseen problems that can be solved as and when they occur. 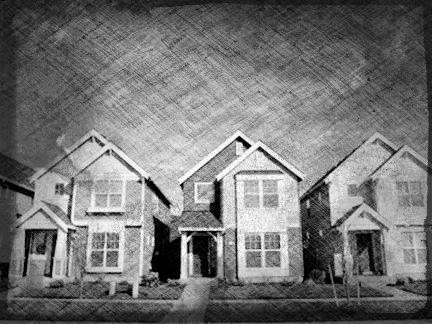 Which takes me to the base boards at last! 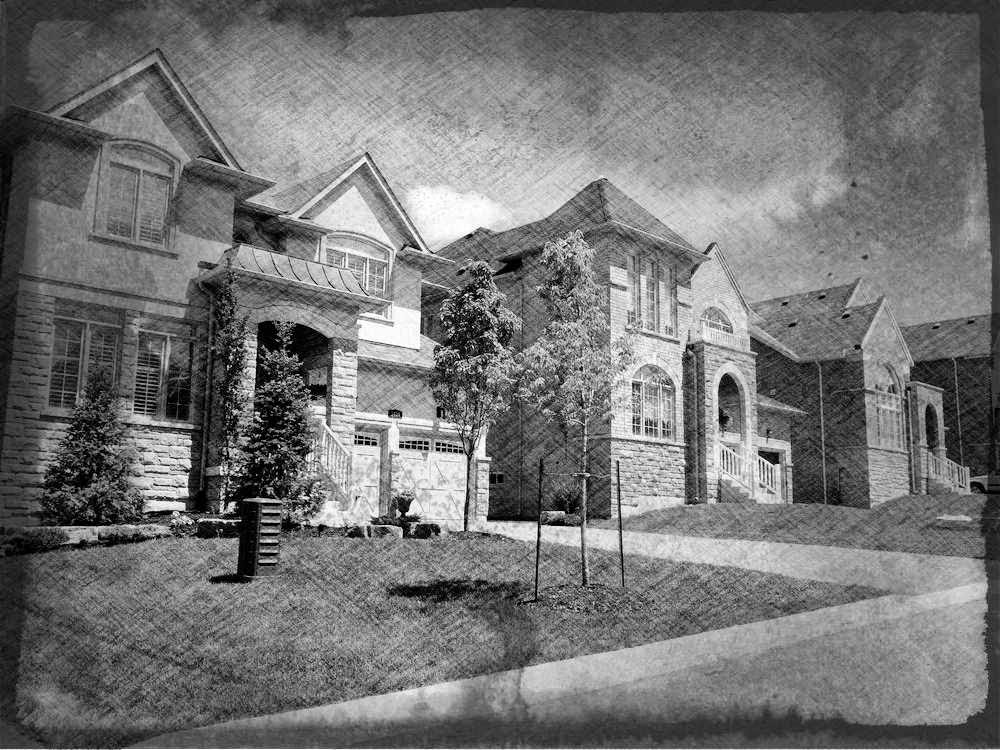 I've done a lot of head scratching again with this one.  According to the rulebook, ATZ should be played on a 3'x3' gaming surface, although 4'x4' is highly recommended.  This is the size of my city boards.  ATZ also abstracts events within buildings.  It does this in a very clever way that saves months of effectively making 28mm scale dolls houses.  What this does mean though is that while a building has a footprint, what happens within it doesn't require model access. Now, my city boards are a case in point here.  To make a 4'x4' area look like a city, you need wide roads and large buildings.  The former is fine, the latter makes a mockery of such a small gaming area. This is why I made my city buildings sit on the edge of the boards, providing a backdrop that gives the impression of a city, but doesn't take a whole lot of space.

I'm allowing 12" for each property.  "Ha!" You exclaim, "That's taking the easy way out because your boards are 2'x2' each!"  Correct.  Eight buildings in total, four of which are simply false fronts.  Honestly, this is like primary school maths.  But there ain't no sense in over-complicating things!

Now, here's where the best laid schemes of mice and men go belly up, to misquote the national bard.  As you can see in the photo below, I cut two 2'x2' sections of foamcore base boards.  They look nice. 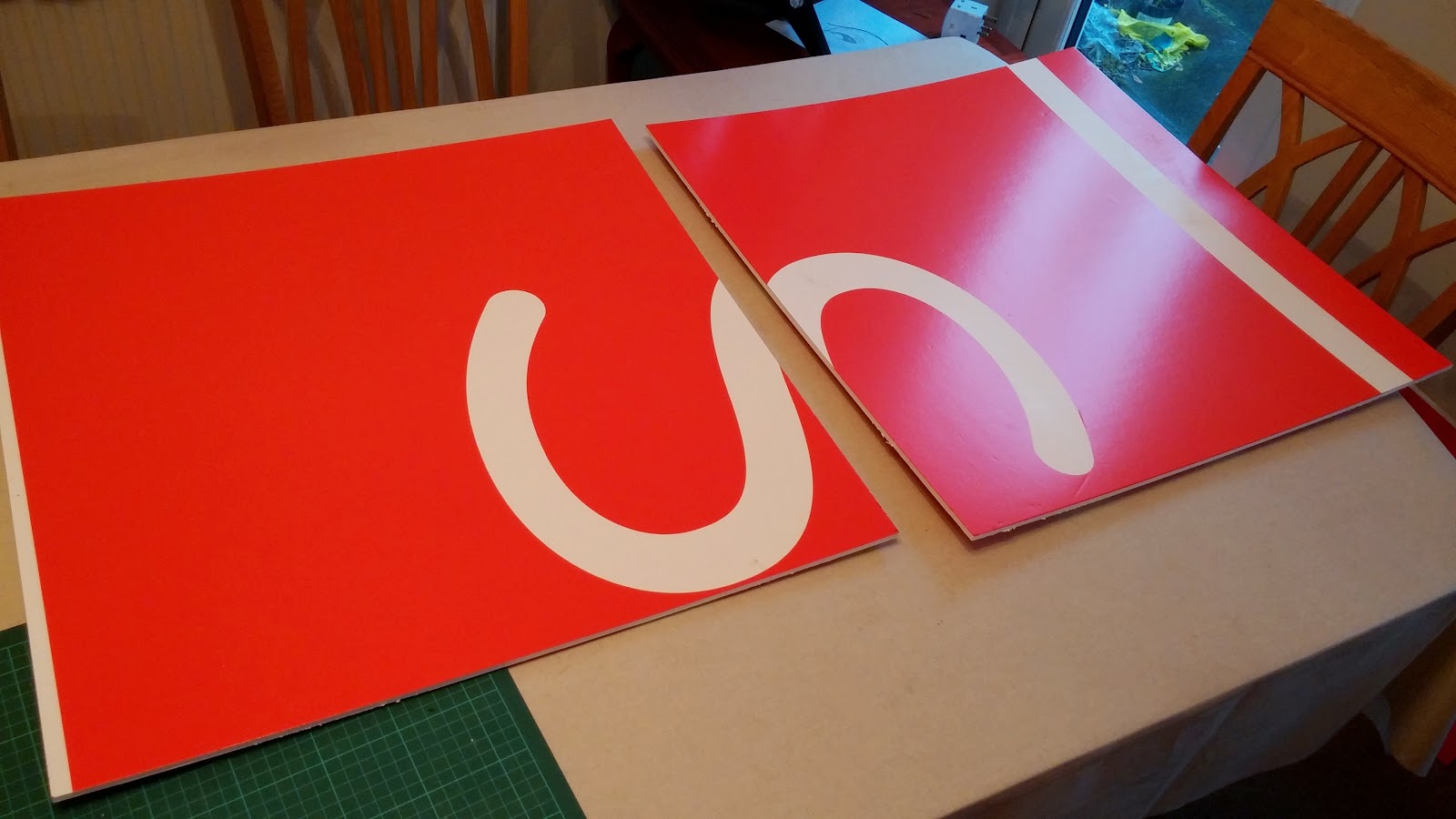 I even measured out the road, pavements, embankments, driveways, pathways and grass.  If you click on the next photo and peer particularly closely you might be able to see them...

And it all looked great.  Until it came to peeling off the top layer of card to reveal the foam beneath.  Then it all went horribly wrong.  Now, although it looks identical to the previous stuff when photographed, it doesn't look the same stuff to the naked eye.  These boards appear to have a cheaper foam sandwiched between the card.  Which appeared to have used some kind of evil glue masterminded by Dr. Doofeschmirtz.  Because it wouldn't come off without pulling chunks of the foam with it.

So I put them aside to use for buildings where such things won't matter.  And I began again with the same sheets used on the city layout.  If it's worth doing, it's worth taking the time to do it properly.  And with Corrie, our wonderful Border Collie keeping me company at my feet, the work began again in earnest! 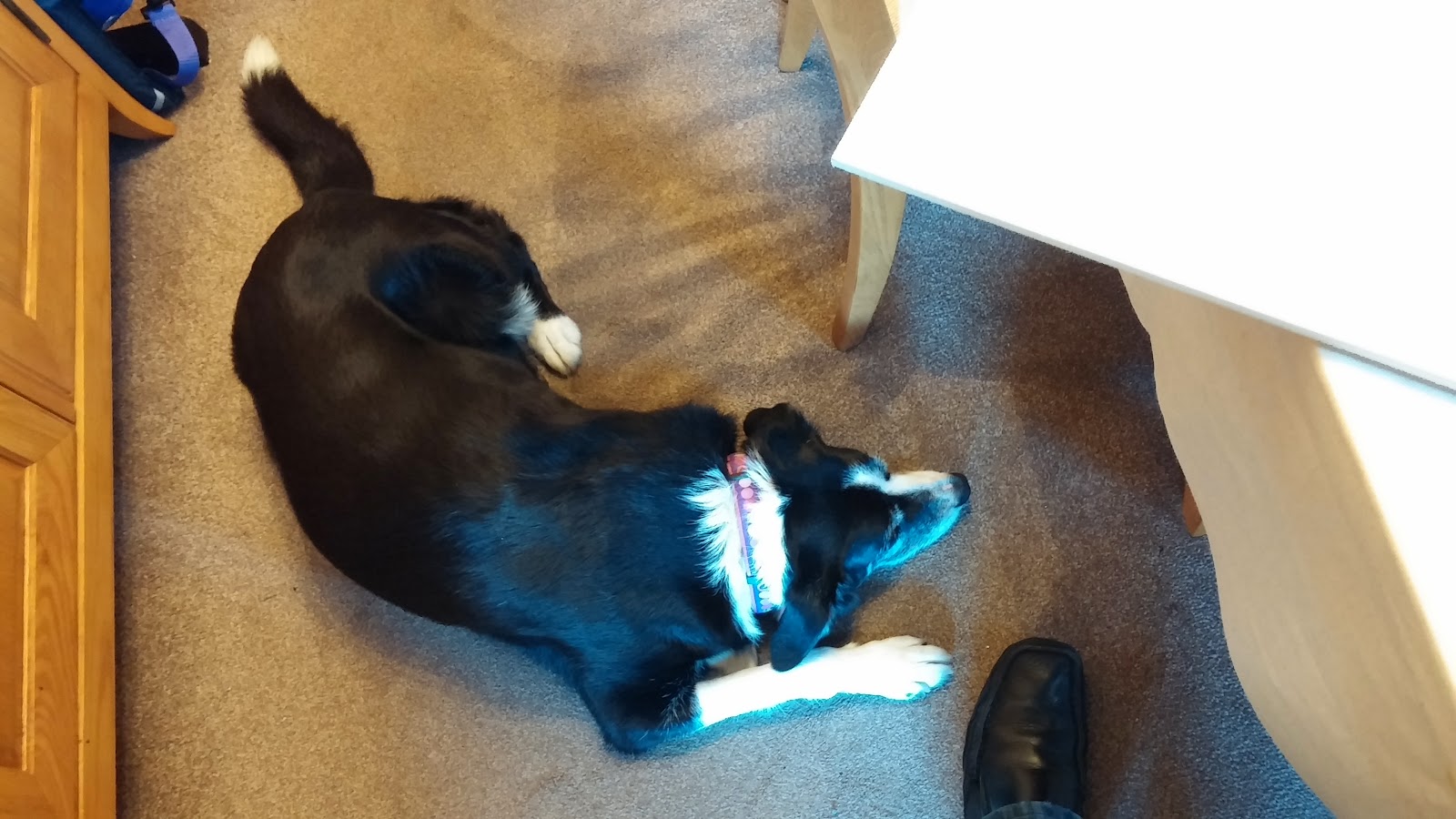 Here's the second flat cut out.  I was clearly too keen to photograph the first. 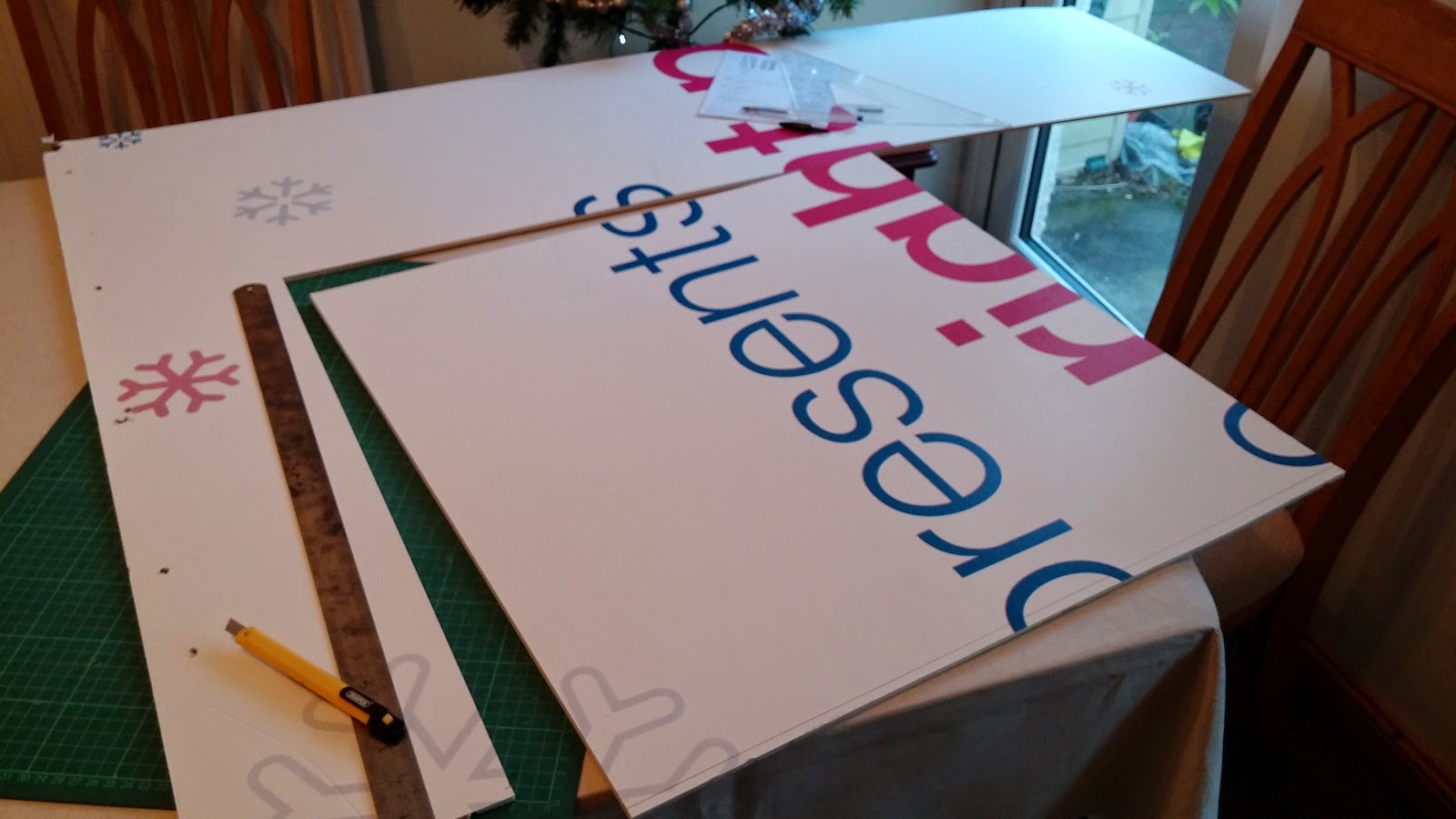 But I was so chuffed to be working with quality foamcore, I couldn't resist taking a photo demonstrating the ease with which I could peel off a layer of card. 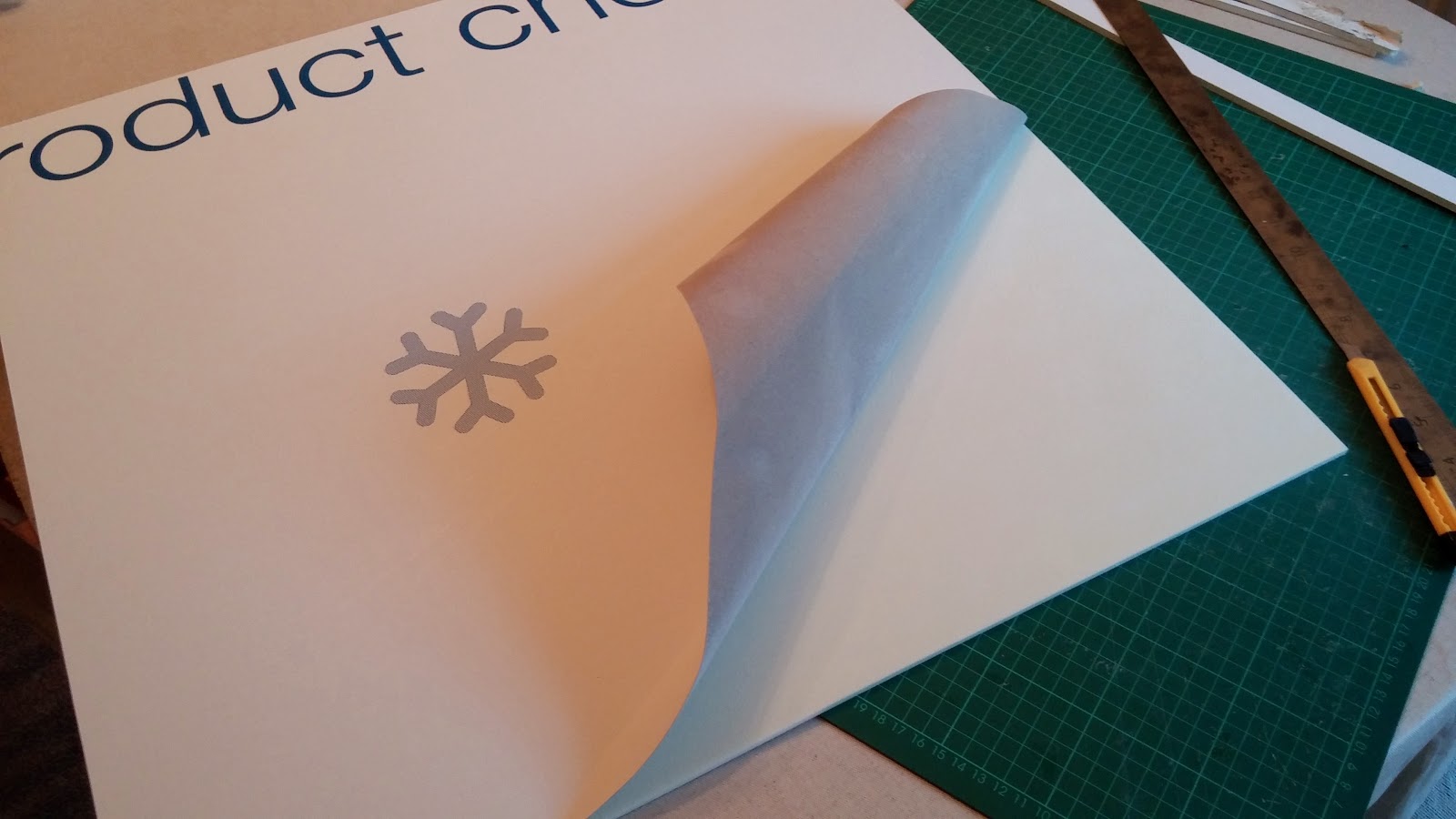 That other board did come in useful though, as I was able to use it to quickly determine the measurements needed for the second layer. 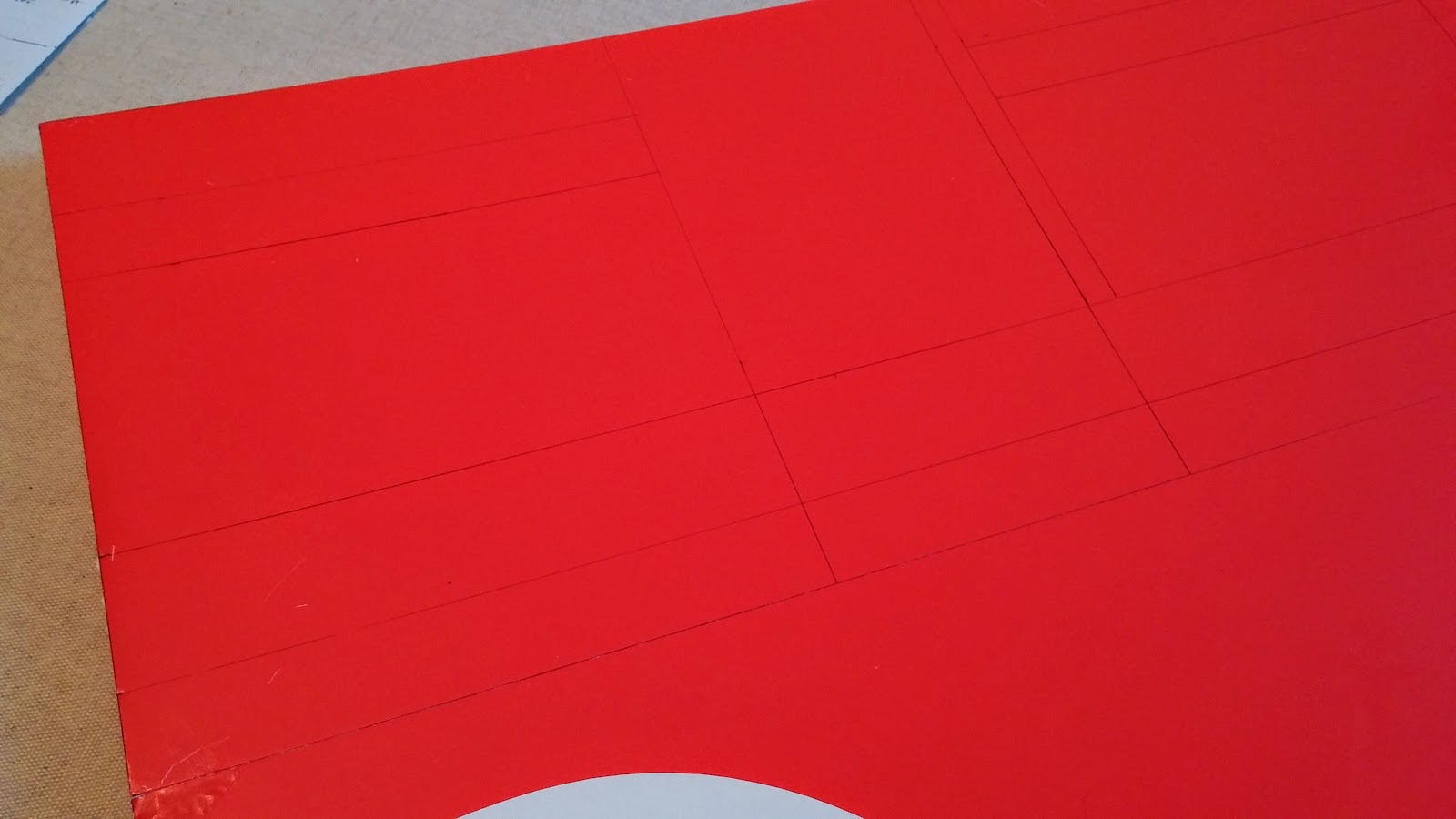 Here they are with the base layer. I decided to go ahead and make the first of the two boards so I didn't mix up which top went on which bottom.  Saves a lot of grief this way.  Which after the problems already encountered is definitely a good thing. 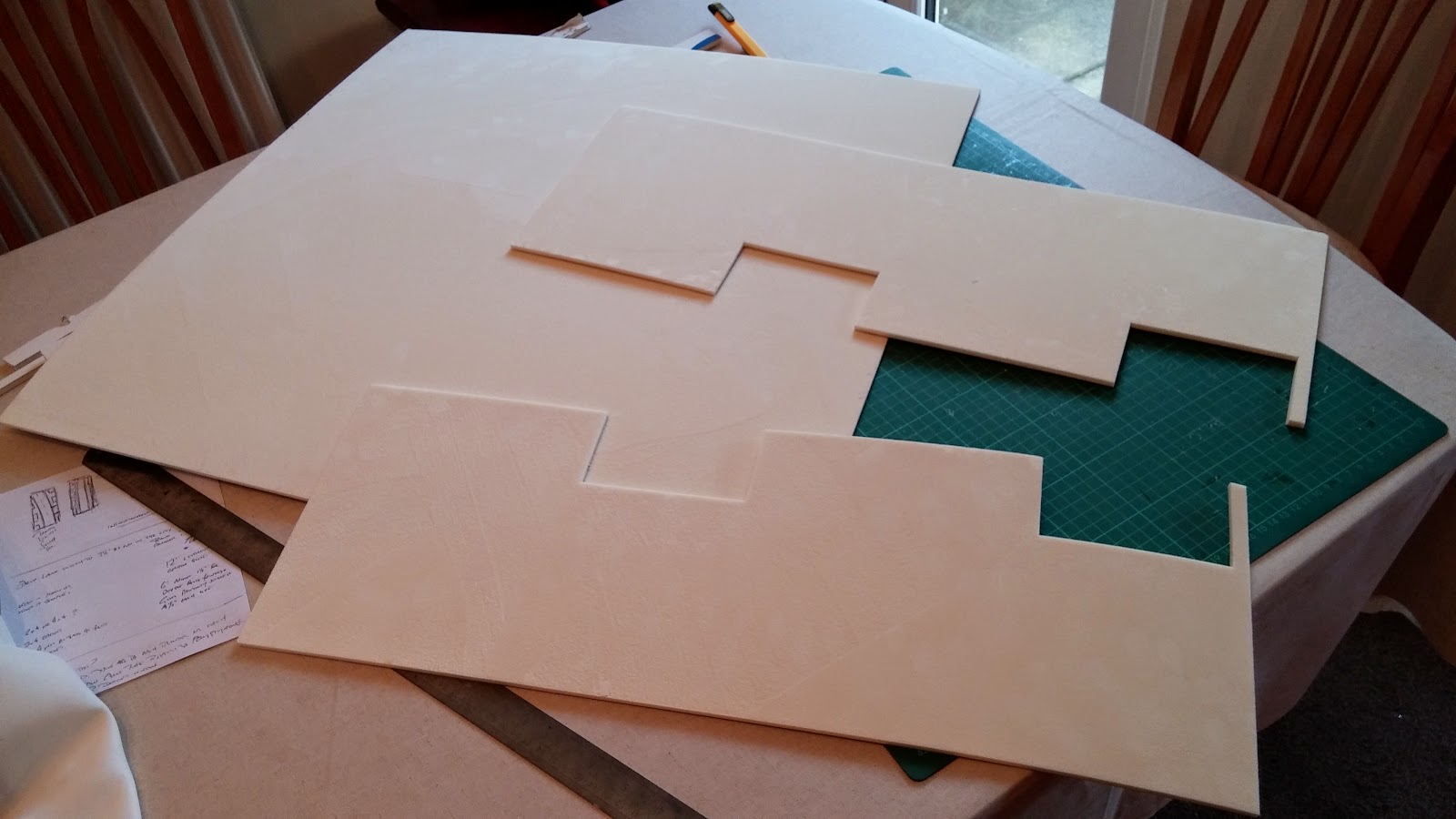 In the next photo you can see the sections cut to create a slope from the road to the pavement level.  These were cut using the pavement layer as a template.  This avoided scoring ugly lines in the exposed foam of the base layer.  They were cut about 2cm longer than necessary.  Being on an incline, they needed to be slightly longer than the horizontal length. Here's a shot of the four exposed for view. 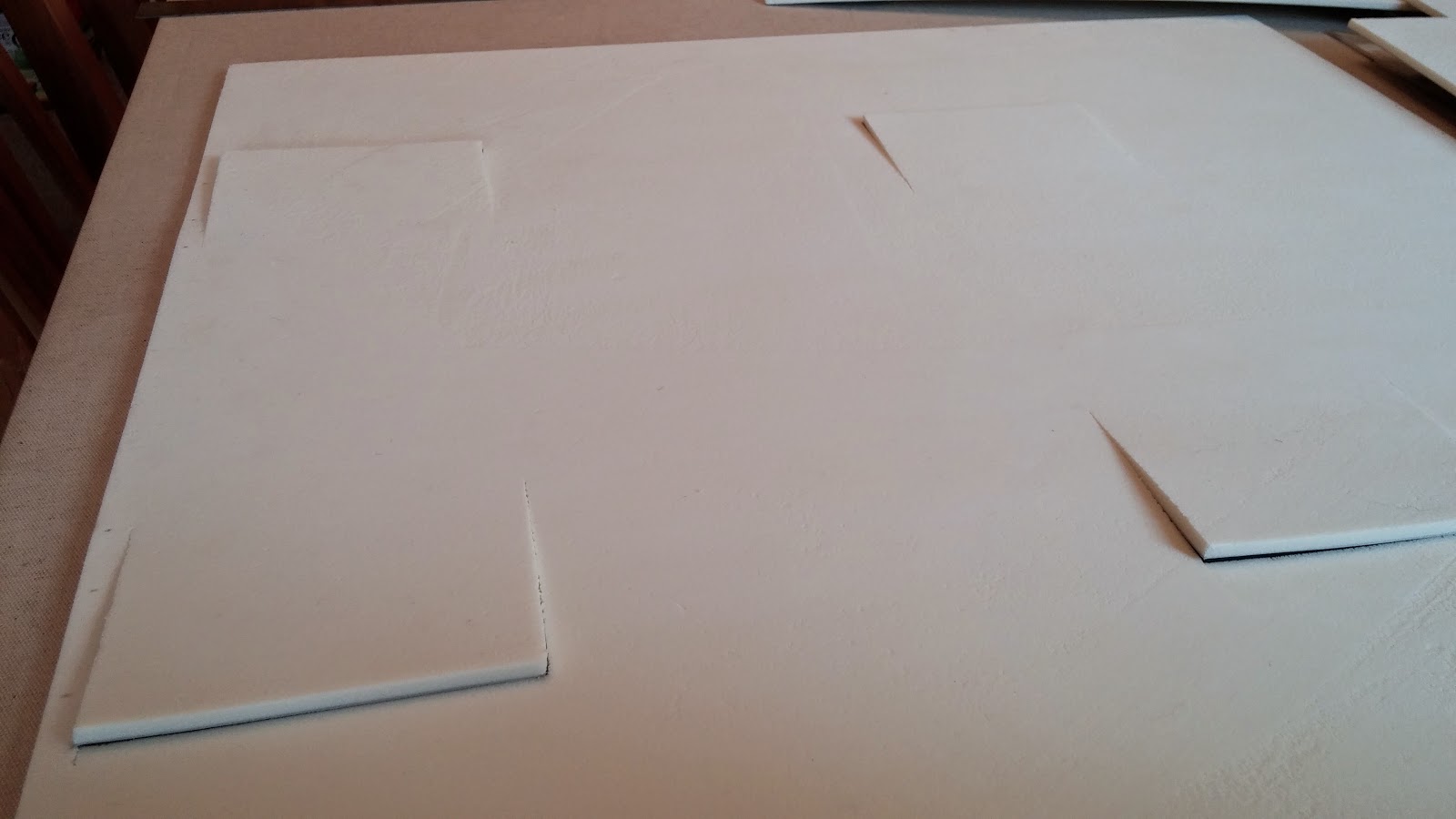 And an example of the driveways with the pavements in place.  The next job was simply to use the ball point pen to mark where I needed to cut off the excess.  Now, I know 2cm seems to be too large a piece, but it isn't.  Have you ever tried to cut off a sliver of foamcore at an angle?  I don't recommend it. 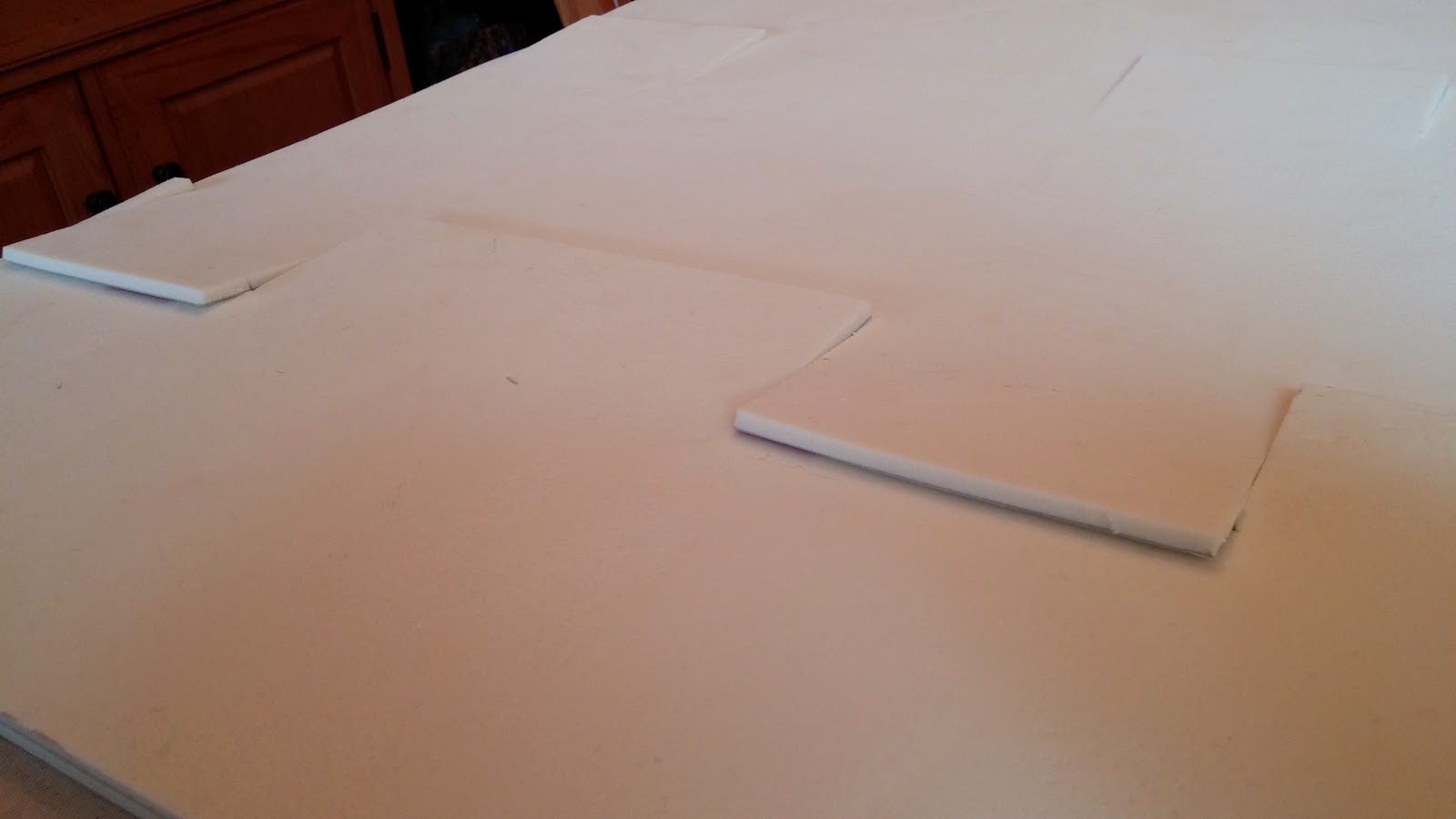 This next photo shows me balancing my steel rule over an exposed driveway lined up with the pen marks and ready to be cut at the correct angle.  You might be able to see a strip of foamcore between the drive and the pavement layer to enable me to make the cut without damaging the surrounding foam.  What you won't see is a photo of me cutting it, for obvious reasons! 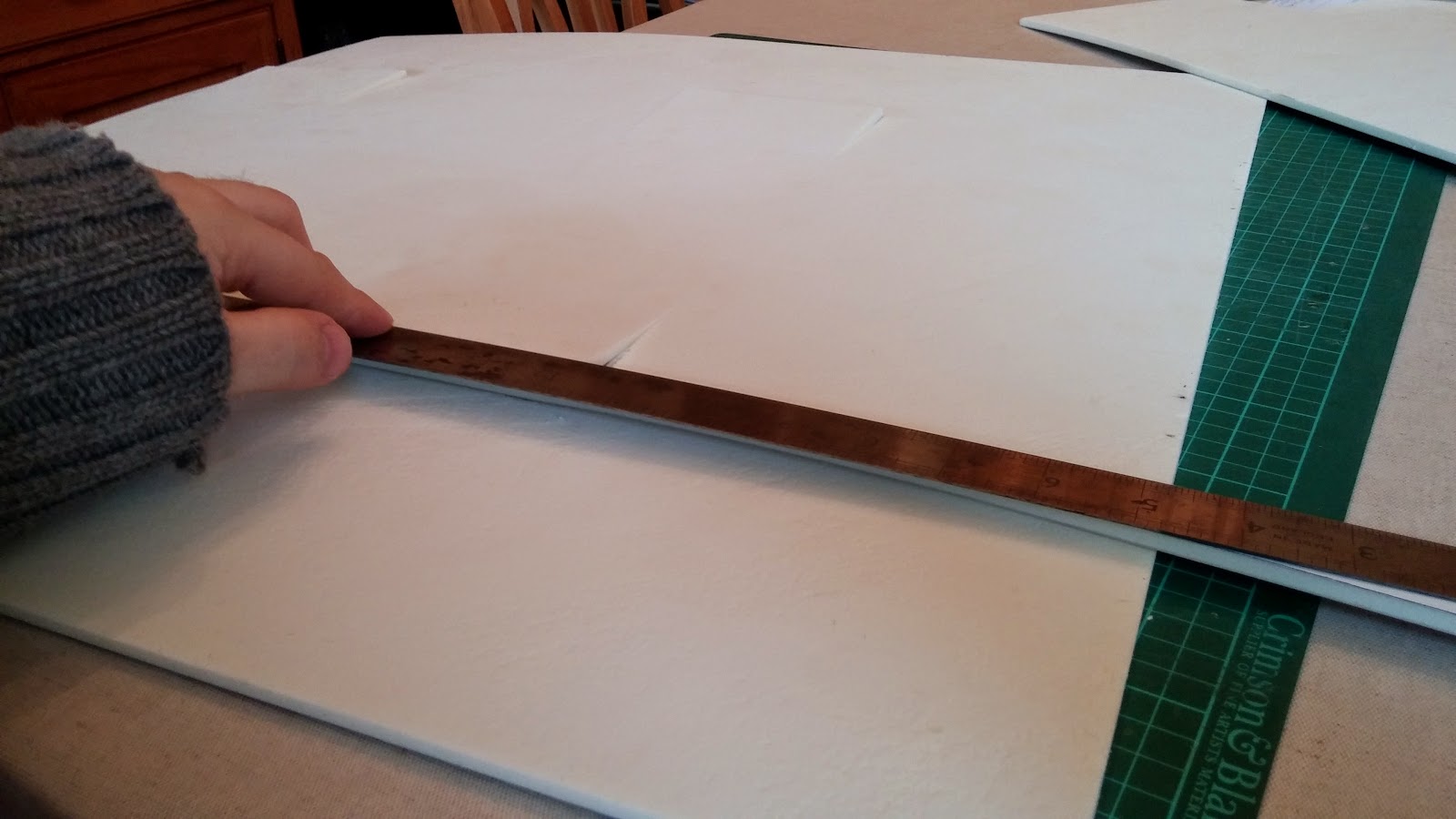 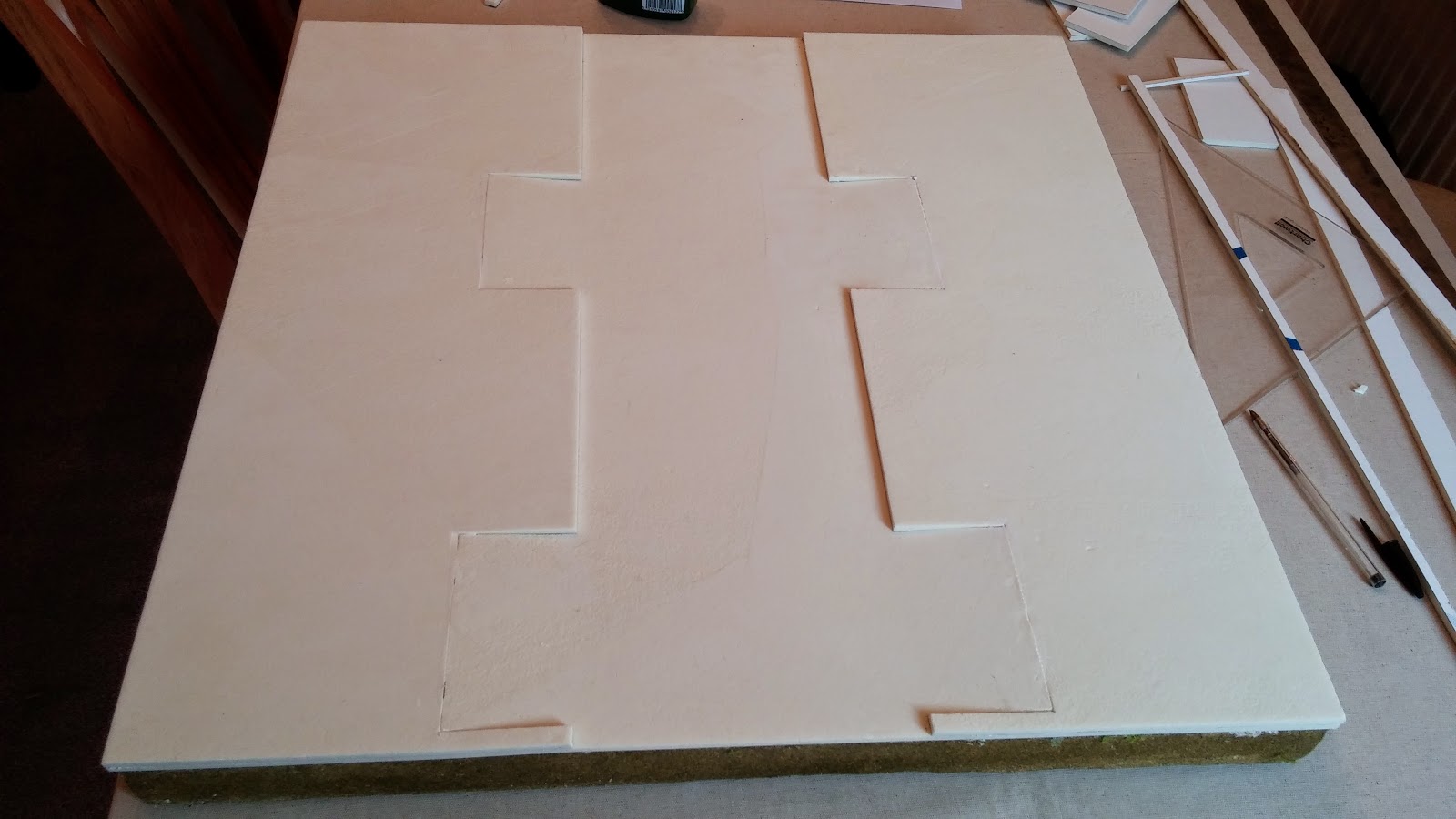 I used Evo-Stick's Wood Glue.  No point messing round with some cheap and watery craft shop equivalent when you're doing this kind of work. 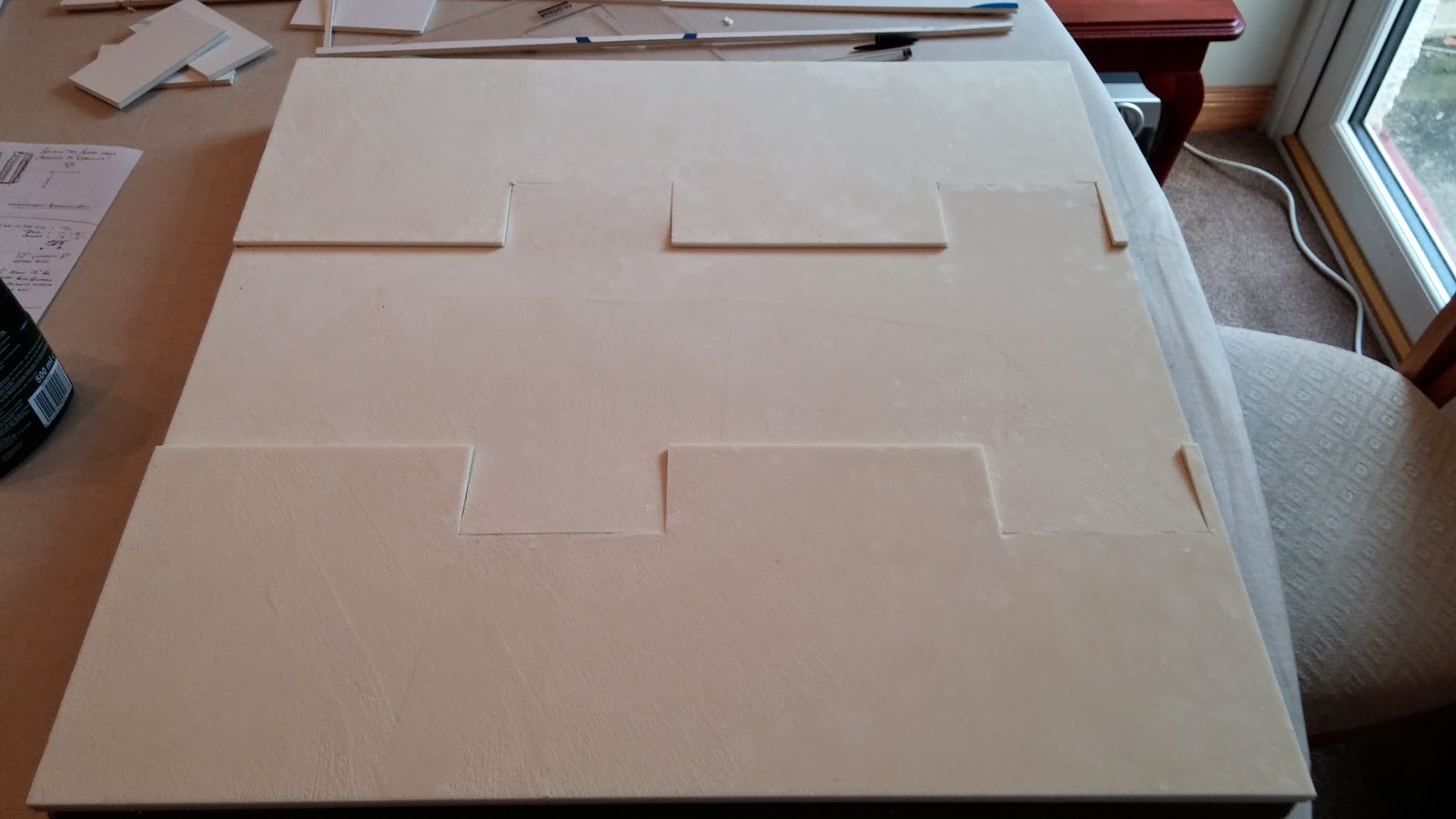 It even made an appearance in the next photo. 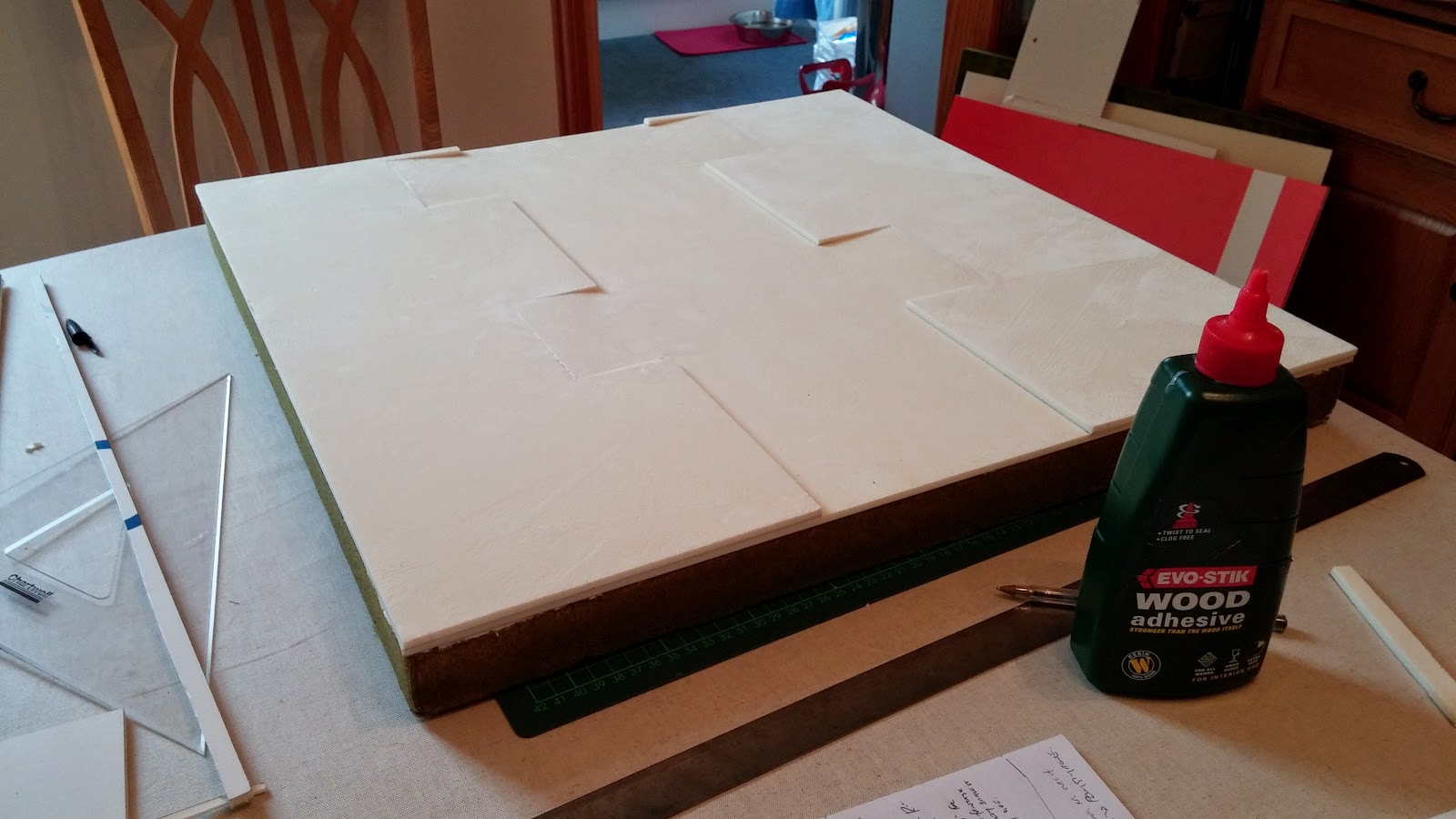 See?  I told you it was all about kerb stones and driveways!  This lot needs left to dry properly.  Next time I'll get to work on the other board and then I can start inscribing the paving and kerb stones themselves.