I've got to begin this post by thanking my family. They have been so supportive of me shutting myself away in the dining room this weekend and giving me space to work on my city scenery for All Things Zombie. Weekends are not something I usually get. I work a lot of Saturdays and I only get 5 Sundays off each year, so you'll appreciate how different this weekend feels. I could quite get used to it though! 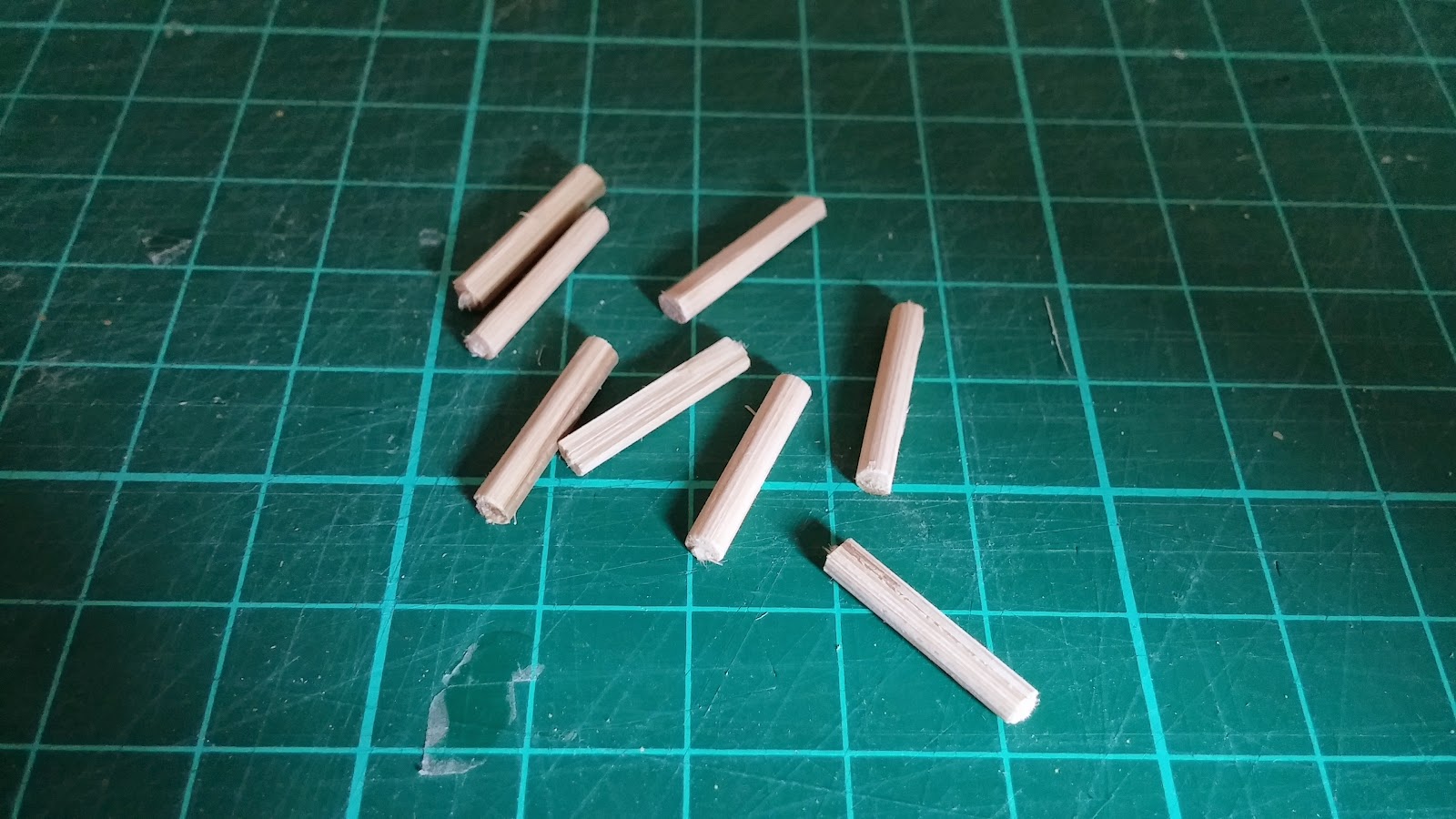 I began this morning where I finished off last night: the traffic lights and the lamp posts. First job was to cut another bamboo skewer to bits. This time it was into ten sixteenths of an inch. I then took a slice down the length of each. This is where they would be glued onto the back of the traffic lights. 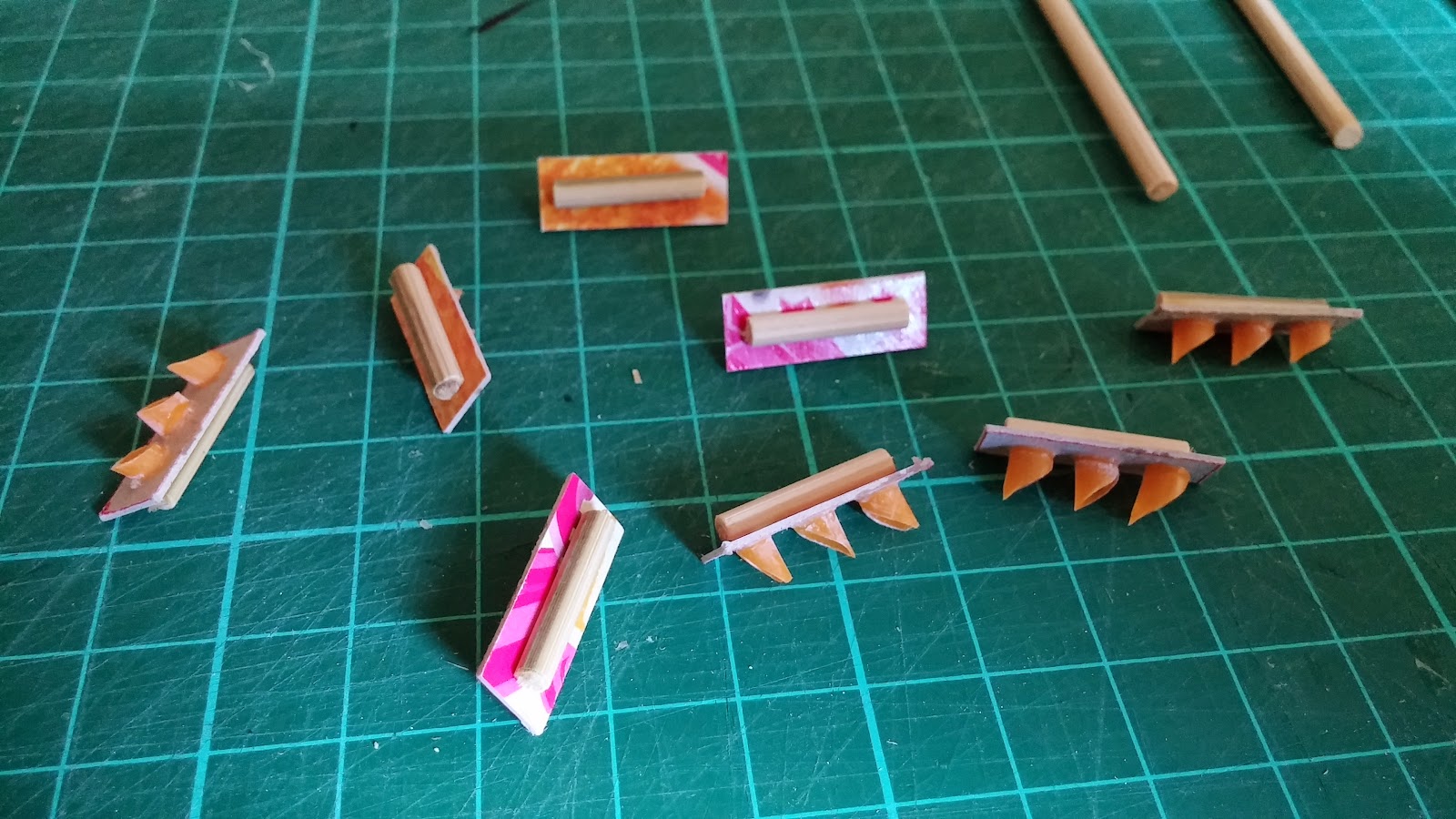 I then filed two grooves in the horizontal beams to accommodate the traffic lights. The traffic lights and the lamp posts look lovely and to scale, but they won't be the easiest things in the world to balance on a gaming table. I decided that the best thing to do was to use rare earth magnets. One would be attached to the bottom of the posts, the other will be fastened into the base boards. As you can see from the next photo, this was another fiddly stage, and one which required the posts to be left a safe distance apart for obvious reasons! 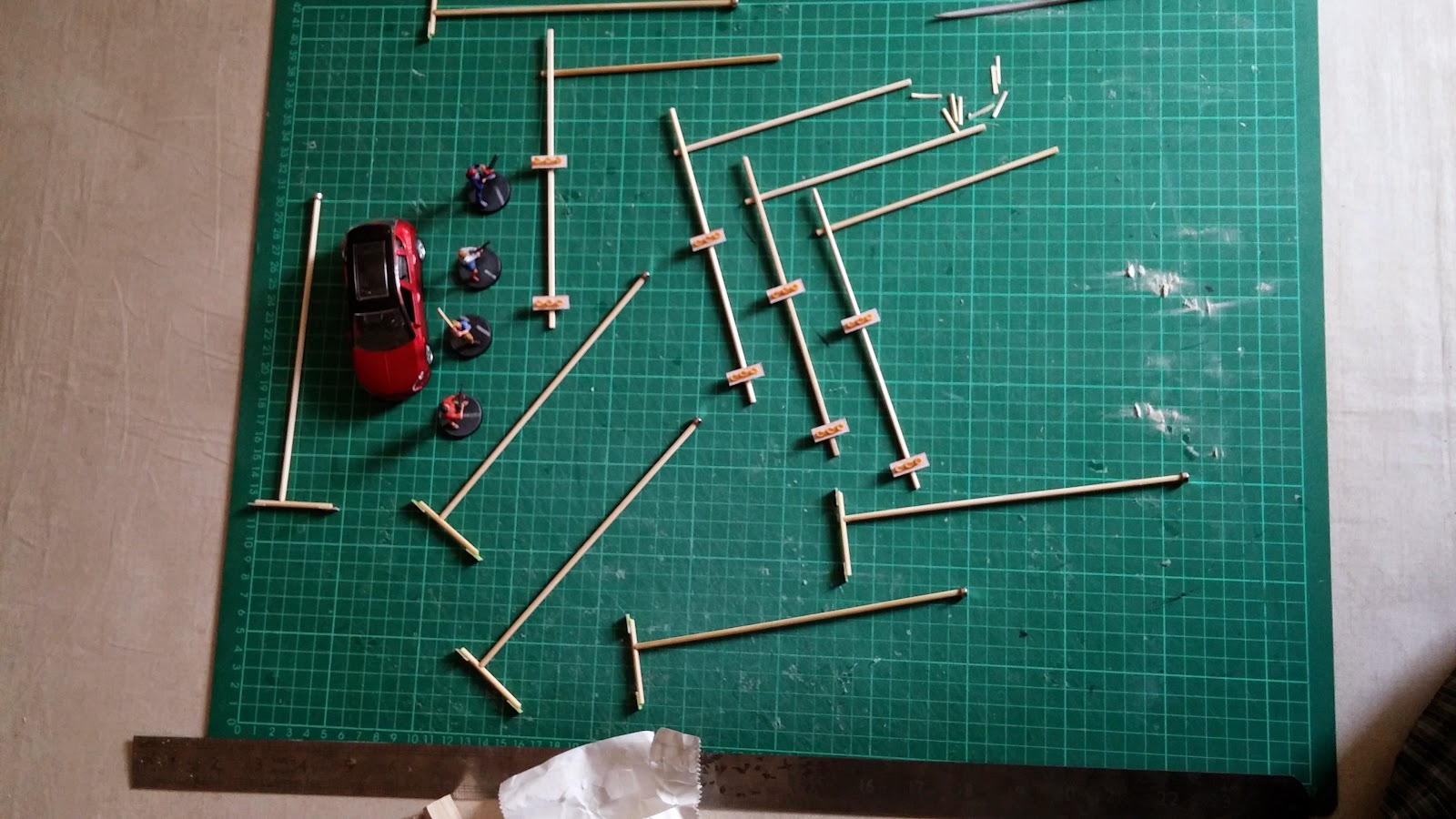 I have two sizes of magnets.  The ones I had originally thought I'd use were narrower in diameter than the bamboo skewers themselves.  Which was clearly no use.  I also discovered I didn't have enough for this job anyway.  So I used the other set.  Which are much wider, but look fine. 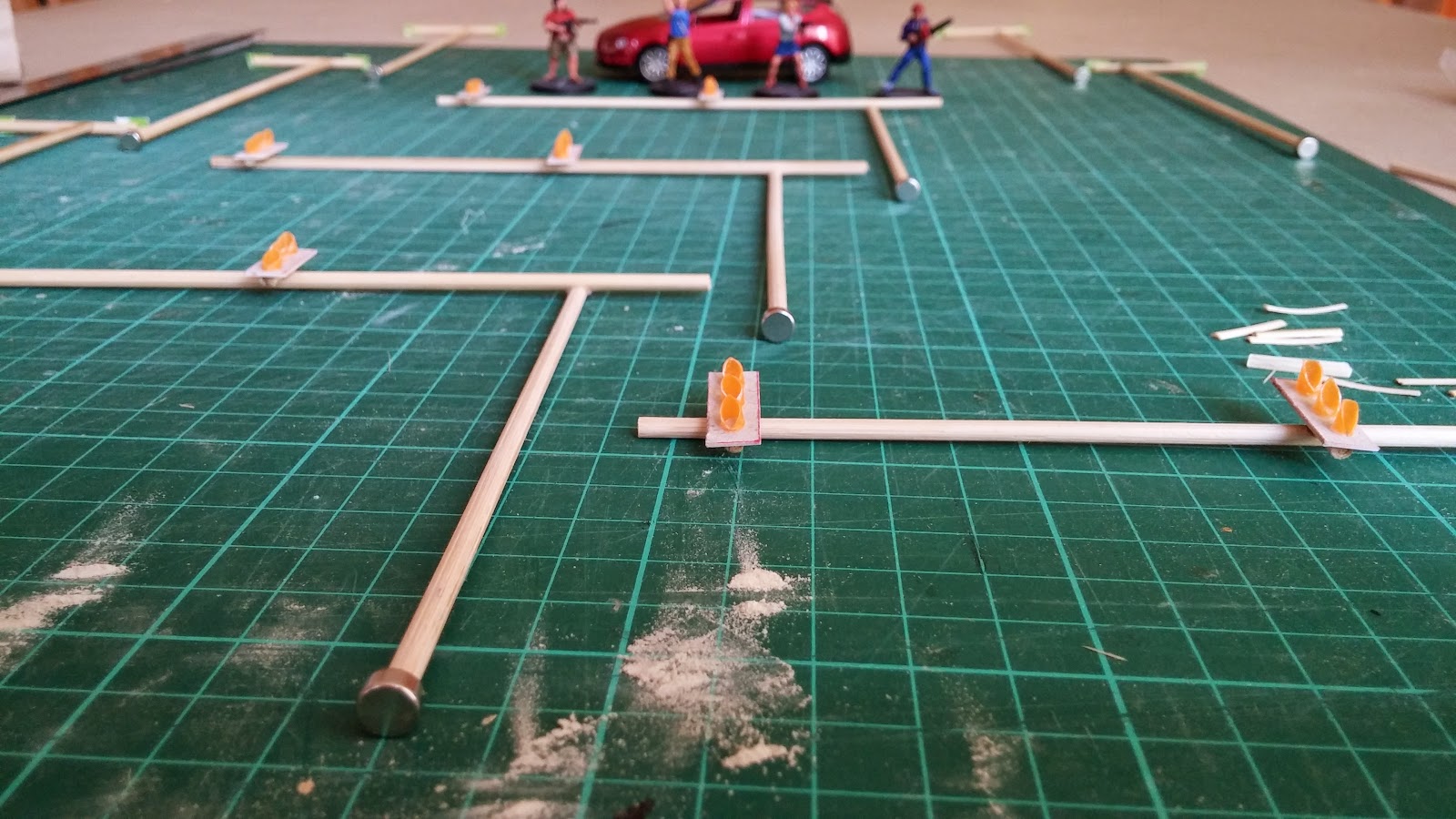 Of course, doing all this prompted me to take out the base boards again.  I wanted to make sure the lights were laid out properly.  And with the boards in front of me, this would be a lot easier for me to do.  It's just the way my mind works. 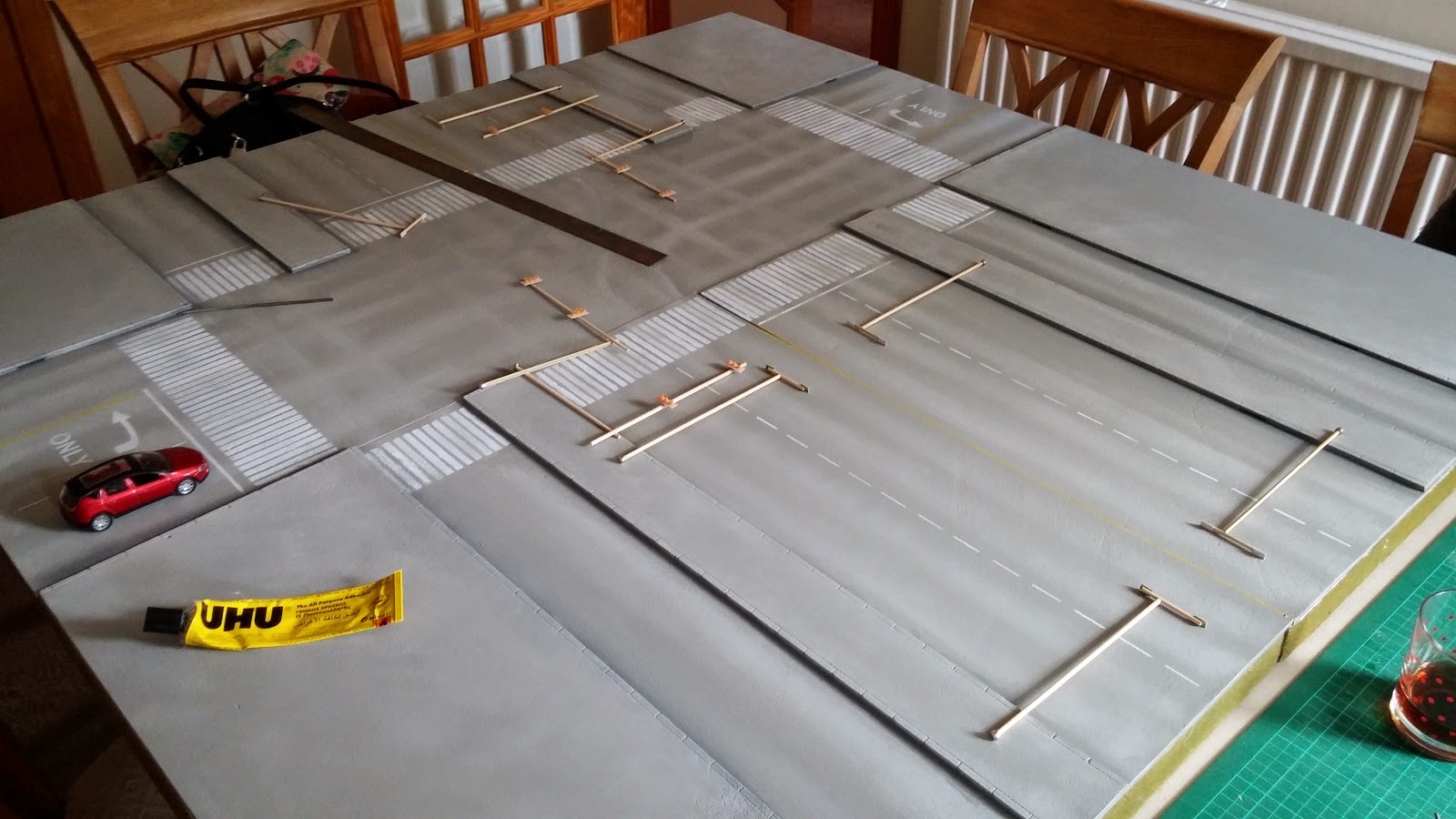 I ended up using the tip of one of my files to prod out the space for the magnets on the board. 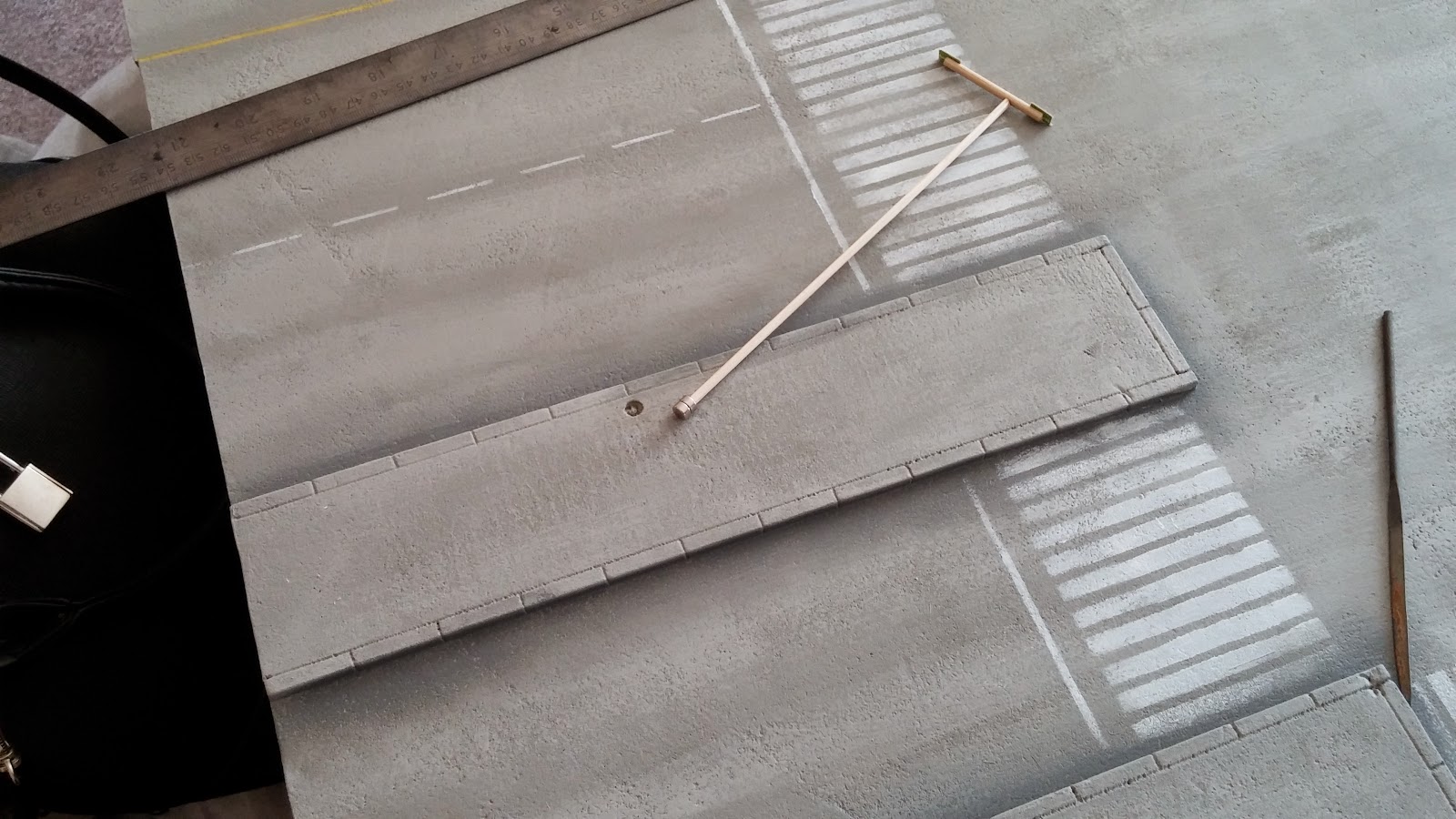 And when the rare earth magnets are allowed to do what they do best, they appear to do a very good job, thank you very much!

Of course, with all this completed, my attention turned to the buildings once more.  And this meant a lot of time spent base coating them.  I've used the same emulsion as that used on the base boards. 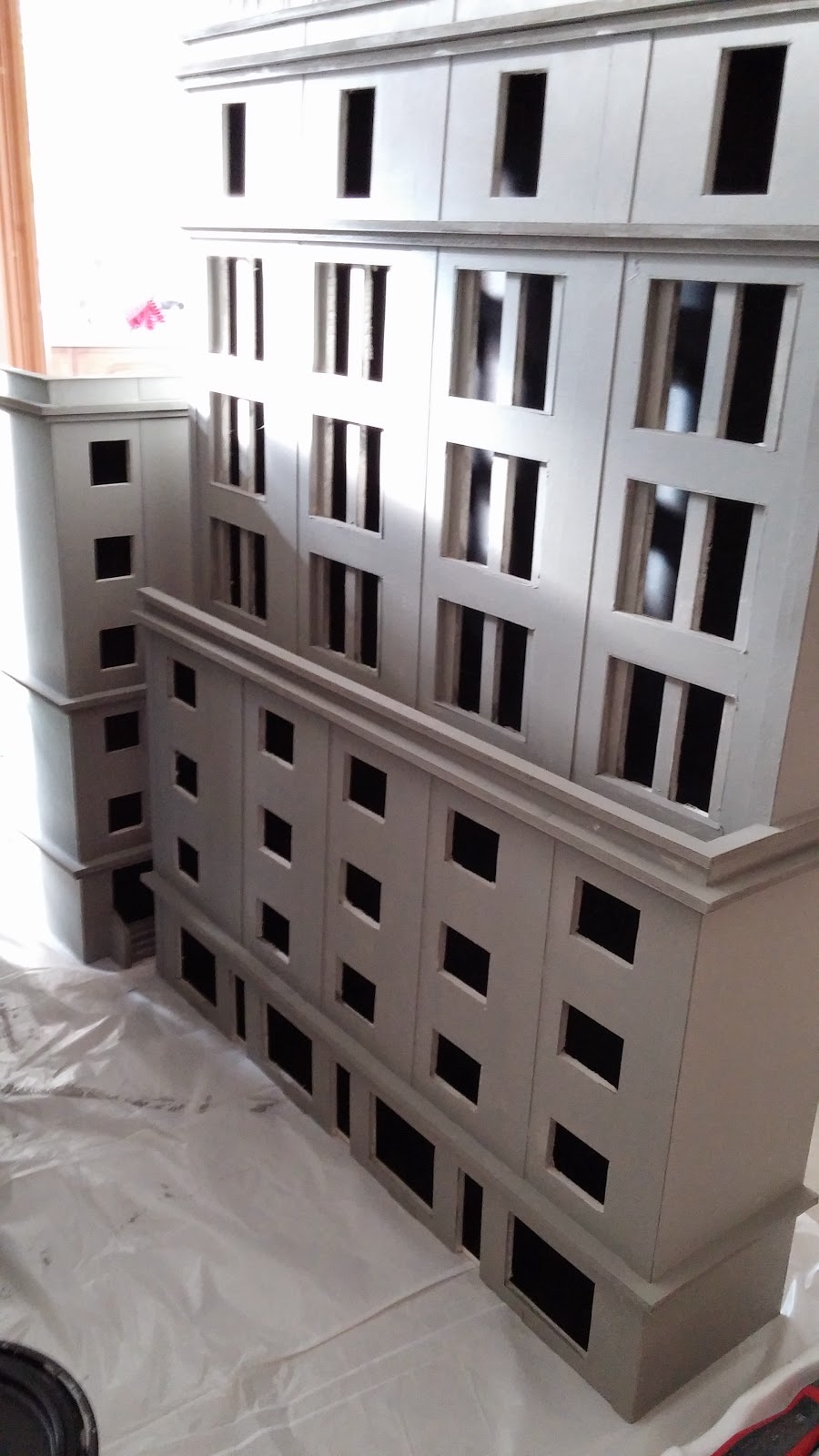 The bin bag underneath the buildings keeps the paint off the table and keeps me in my wife's good books!

You can see that there are some parts of the surface of the buildings that appear to be shiny.  No mean feat when I'm using a matt paint.  This is actually caused by the writing on the foamcore.  It used to worry me when I first started recycling shop POS advertising foamcore in this way. But it always dries matt.  It just takes a little longer than the rest of the surfaces.  And if you go near it before it dries, it comes off like a film in great chunks.  Not only does this look bad, it puts horrible streaks across your painted surface.  So don't do it.  I did once.  It's a nightmare I try to forget! 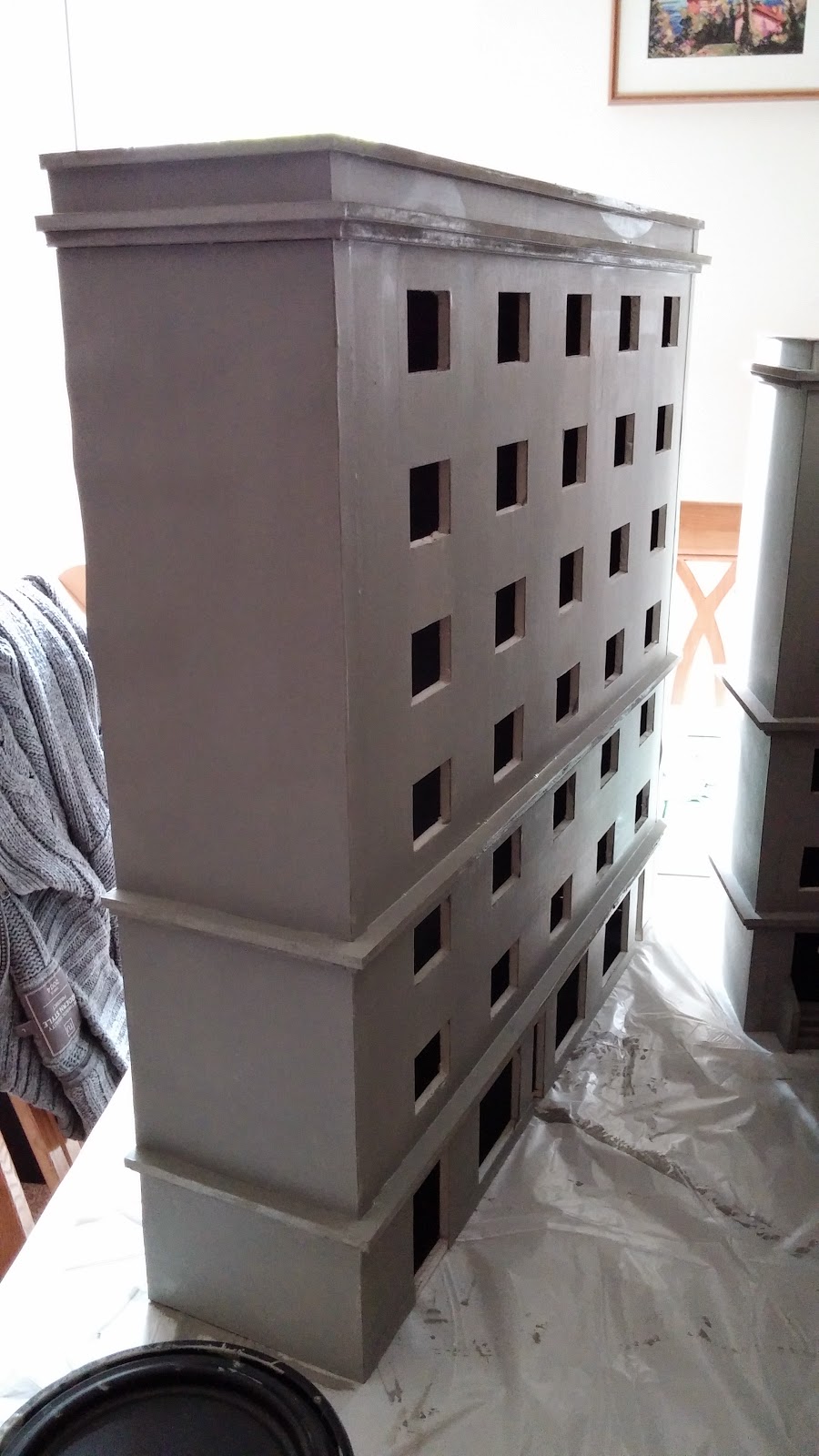 I had time to start painting the largest of the buildings.  This is the bit I always hate.  Why?  Because this is the point that makes or breaks the model.  Everything has potential until the brush is applied.  A bad paint job will always ruin a good model.  No pressure there then! So here's the base coat of colour.  It actually looks a lot more yellow in the photo than it did going on. 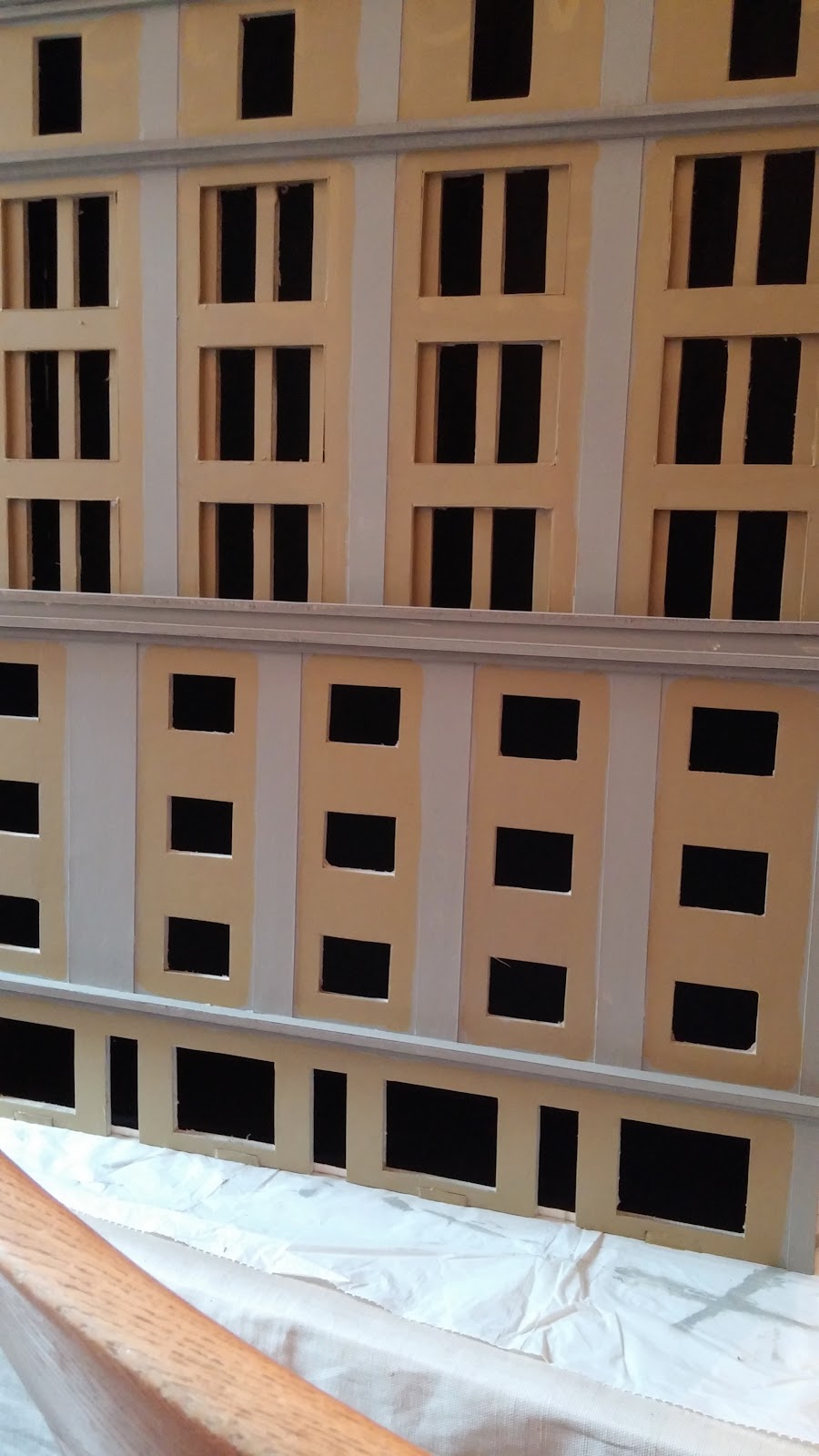 And since I've never taken a photo at this stage, I thought I'd do so.  It's the first bit of shading going on.  I tend to make the first level the darkest and then blend it to the original shade.  You can see some of that happening in the bottom right of the picture. 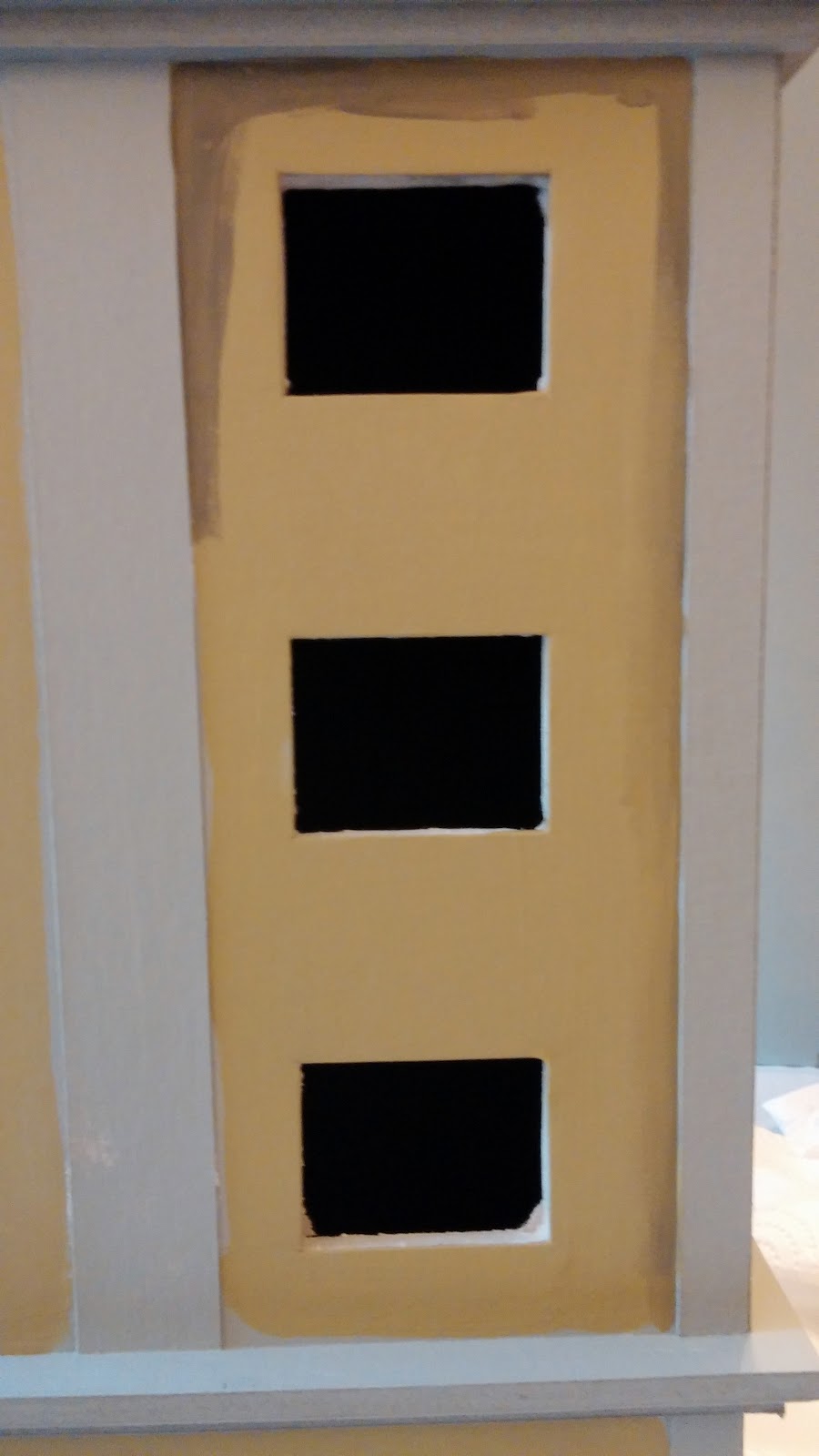 And this is as far as I got with the shading today.  There's a long way to go, but thanks to this Zombtober HobbyFest weekend, I'm hopeful to be able to finish off this project in the coming week. 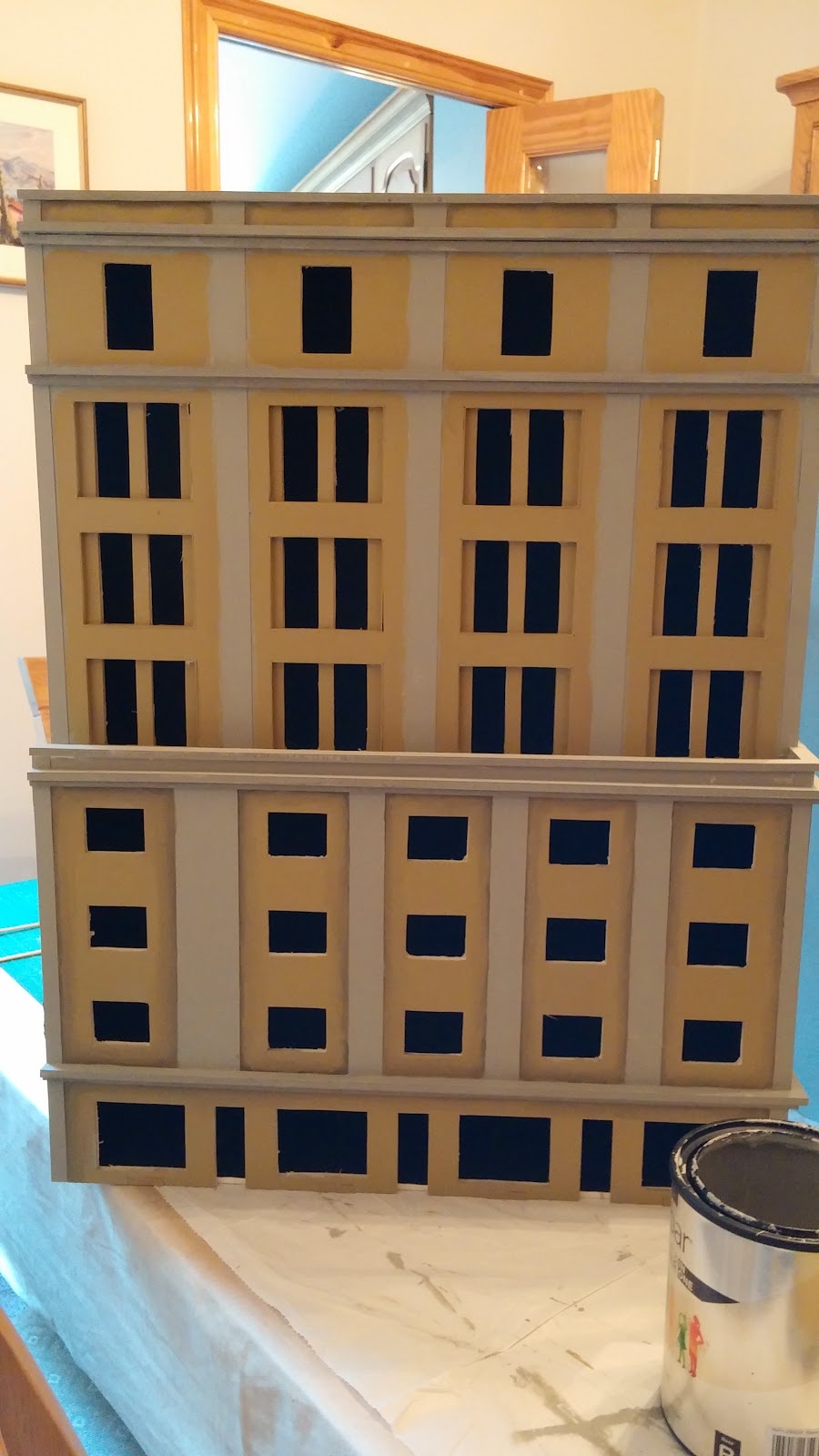 And that would be just awesome!