Welcome to The Town with No Name!

Welcome, one and all to The Town with No Name! 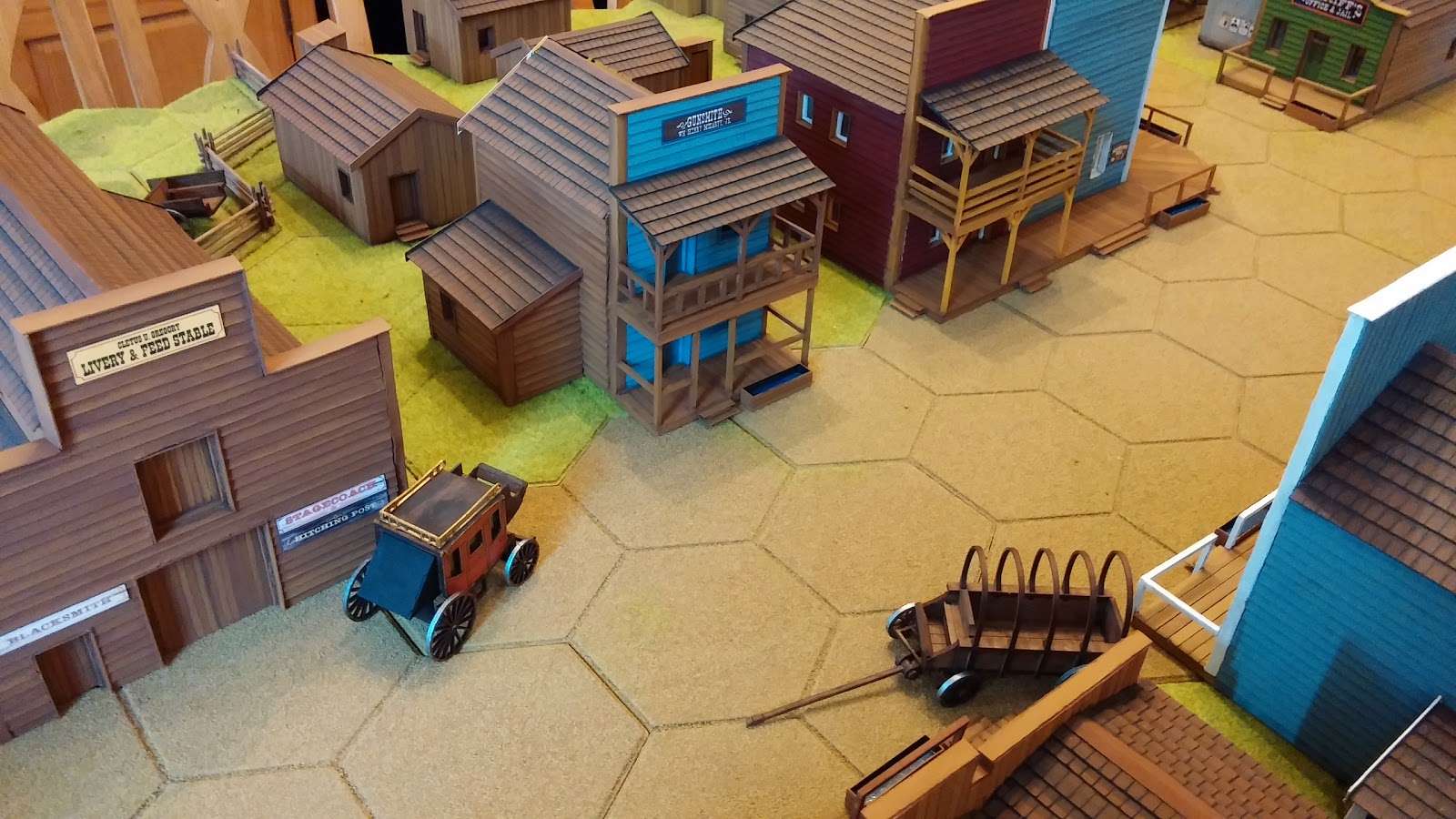 It all began on Boxing Day 2012 as I drew my first plans for the Sherrif's Office and Jail onto some foamcore.  And it finally reached the gaming table last night, 7th July 2014. It's been a long journey, but having seen it in the flesh, it's definitely been worth all the effort! And having played our first game of The Rules with No Name last night, I can honestly say that the wait has indeed been well worth it! 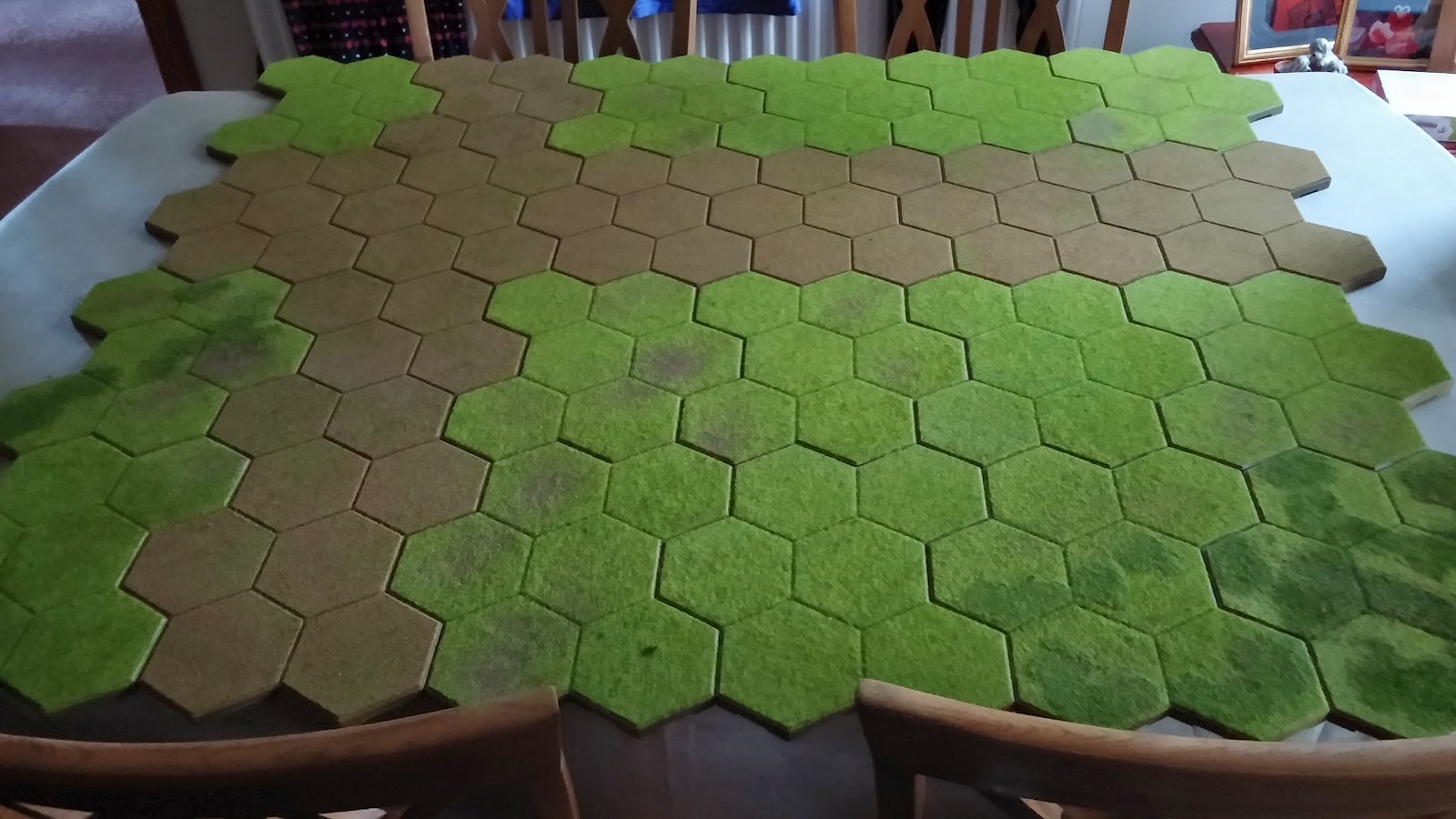 First job was to lay out the Hexon II boards.  Even this part was quite exciting.  And here's what happened when I eventually decided where to place the buildings! 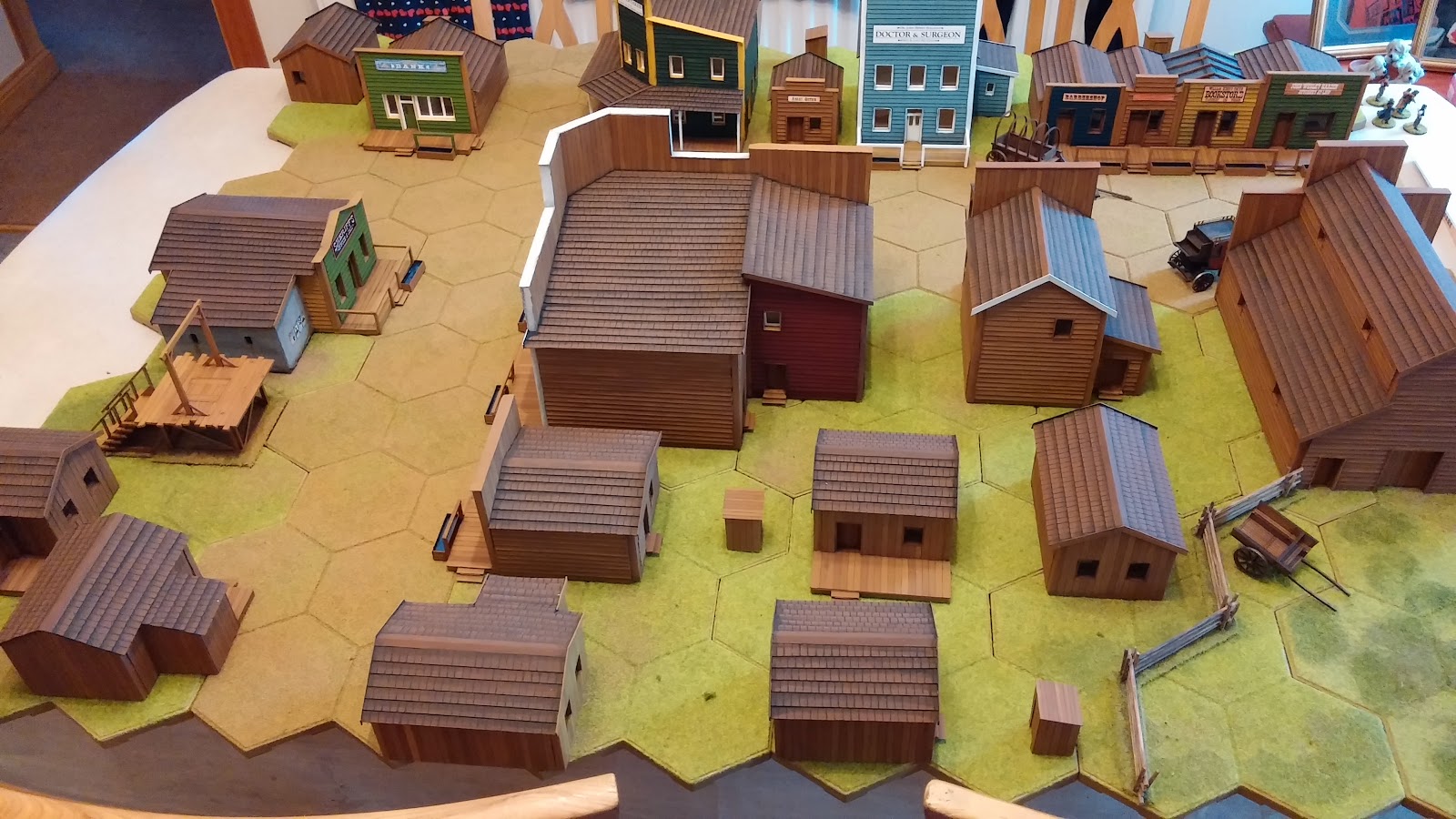 I soon realised that there were a couple of extra things I was needing. Nothing as dramatic as more buildings.  I have too many of them already to get on the board! Firstly, I'm going to flock a few more boards with earth colours as the dwellings were surrounded with verdant grass.  This isn't a problem as I haven't flocked more than half of my second set.  It will mean I'll need to buy more boards in the future to meet all my other plans, but that's something I can happily live with as they are fantastic and store away in next door to no space.

Secondly, I really need some horses!  You know, the kind you can hardly find anywhere.  Saddled and tethered to some of the hitching posts. And of course, a couple frolicking in the Livery Stable field would have been nice too!  I'm thinking of getting an ACW Horse handler from Perry to solve this problem.  And if anyone can find a decent model of a cowboy leading his horse then please let me know!  There's one in the Bystanders deck, but I can't find one online. 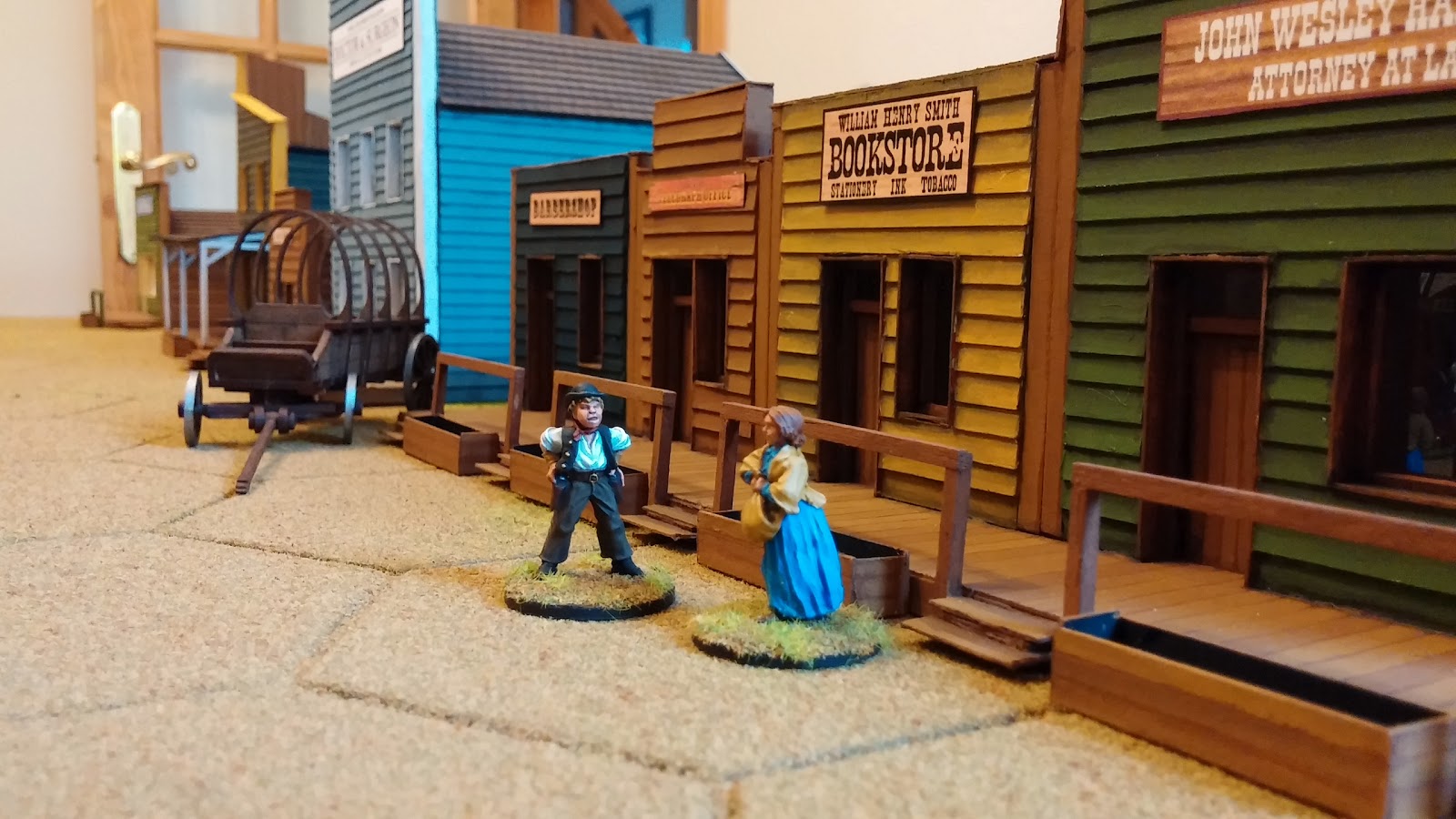 I must confess I couldn't resist putting a few figures on the board before the game.  Above you can see Billy the Kid (Artizan Designs) doing his best to chat up Molly Quinn (Perry Miniatures). 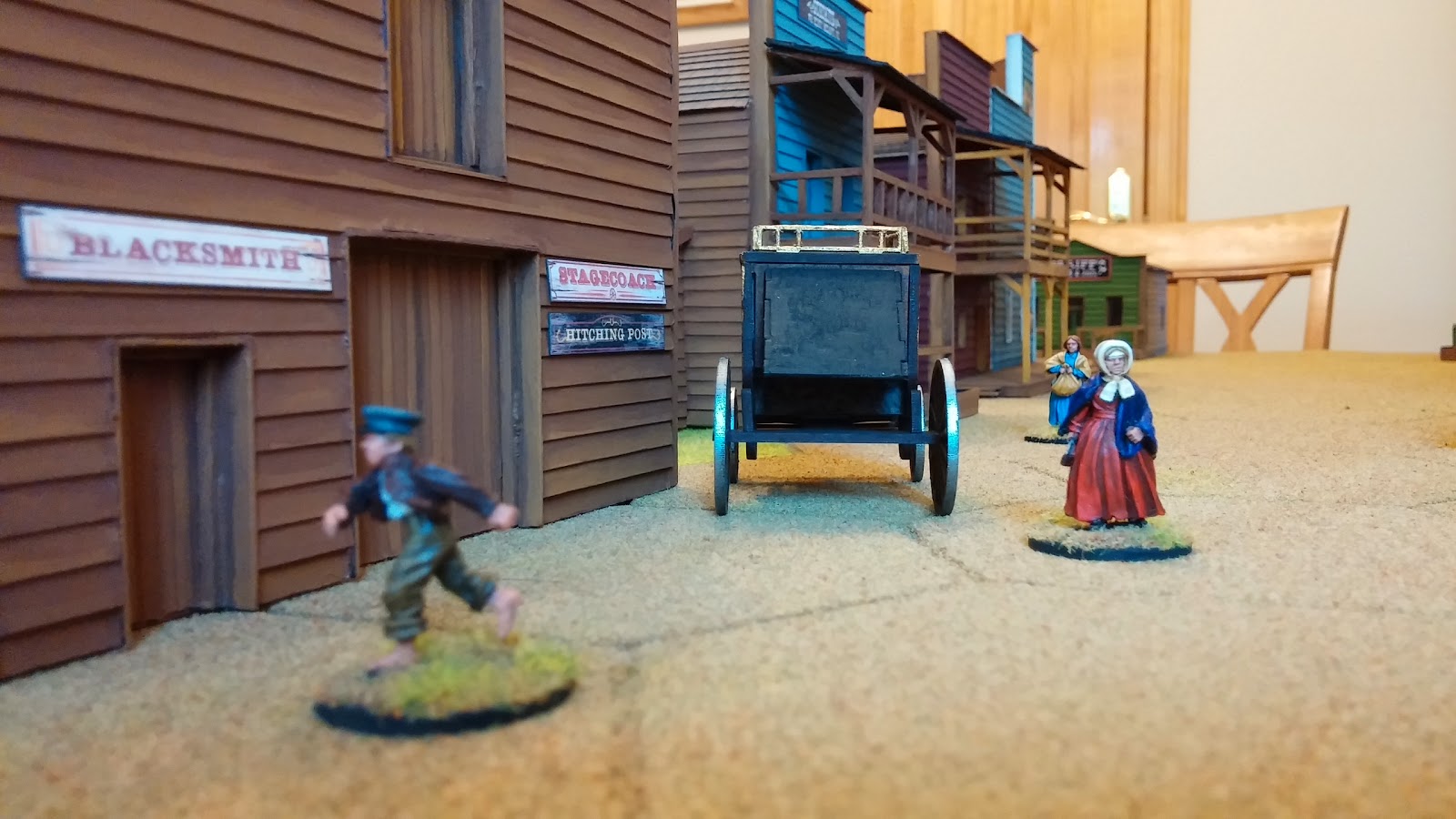 And here's a view down the other side of the main street.  Notice the young lad running past the blacksmith's door?  He seems to do a lot of running about.And here's a bunch of blissfully ignorant citizens going about their early morning business... 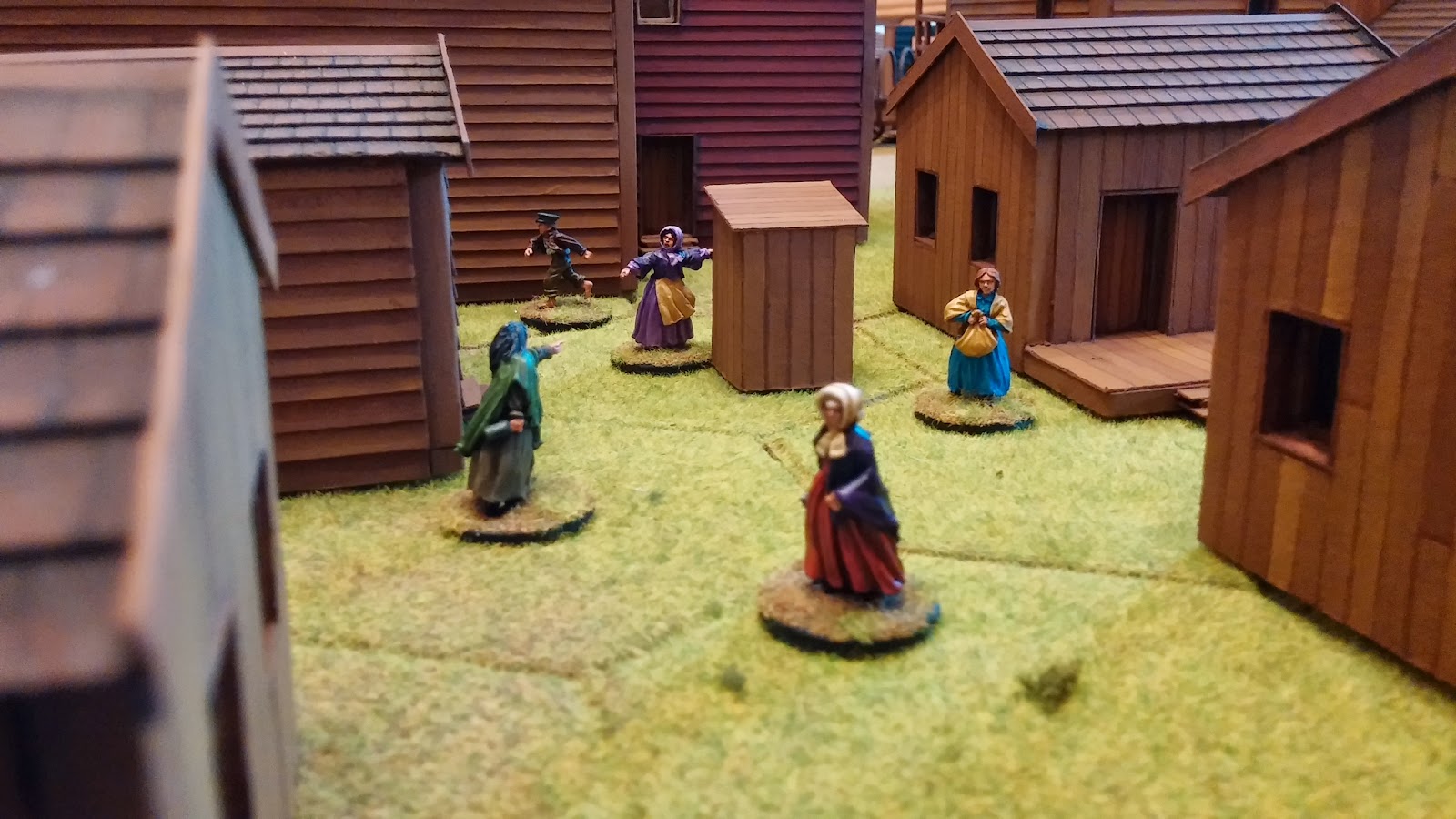 Of course, I got too carried away with the spectacle of the whole thing and forgot to take as many pictures as I had originally planned to.  Still, when I get the chance I'll just have to let you know what happened in our first game!
Labels: 4Ground Artizan Designs Hexon Boards Old West Wargaming Old West Wargaming Scenery Perry Miniatures Sarissa Precision The Rules with No Name The Town with No Name