A great opportunity occurred last night to dust off the old custom built board and gather the miniatures for an evening's entertainment courtesy of Chris Peers' Saurian Safari rules.  Andrew chose to take control of Major Payne, his wife the Lady Constant Ann-Oyannce Payne and the ever-faithful Pte. Gathering.  Luke, on his introduction to the game, chose to take Count Otto Von Wahnbildt and Sgt. Reynolds.  This rather nicely left me with Sir Rupert Utterley-Barkinge and his faithful servant Goonda.


As per usual, Lady Constant had decided to go out at the break of dawn to search for Archaeopteryx eggs. Fortunately for her, the long-suffering Major had rushed off after her carrying his Nitro Express and hollering on Pte. Gathering.  This in turn awoke Sir Rupert and Goonda who hastily dressed and rushed out to their aid. 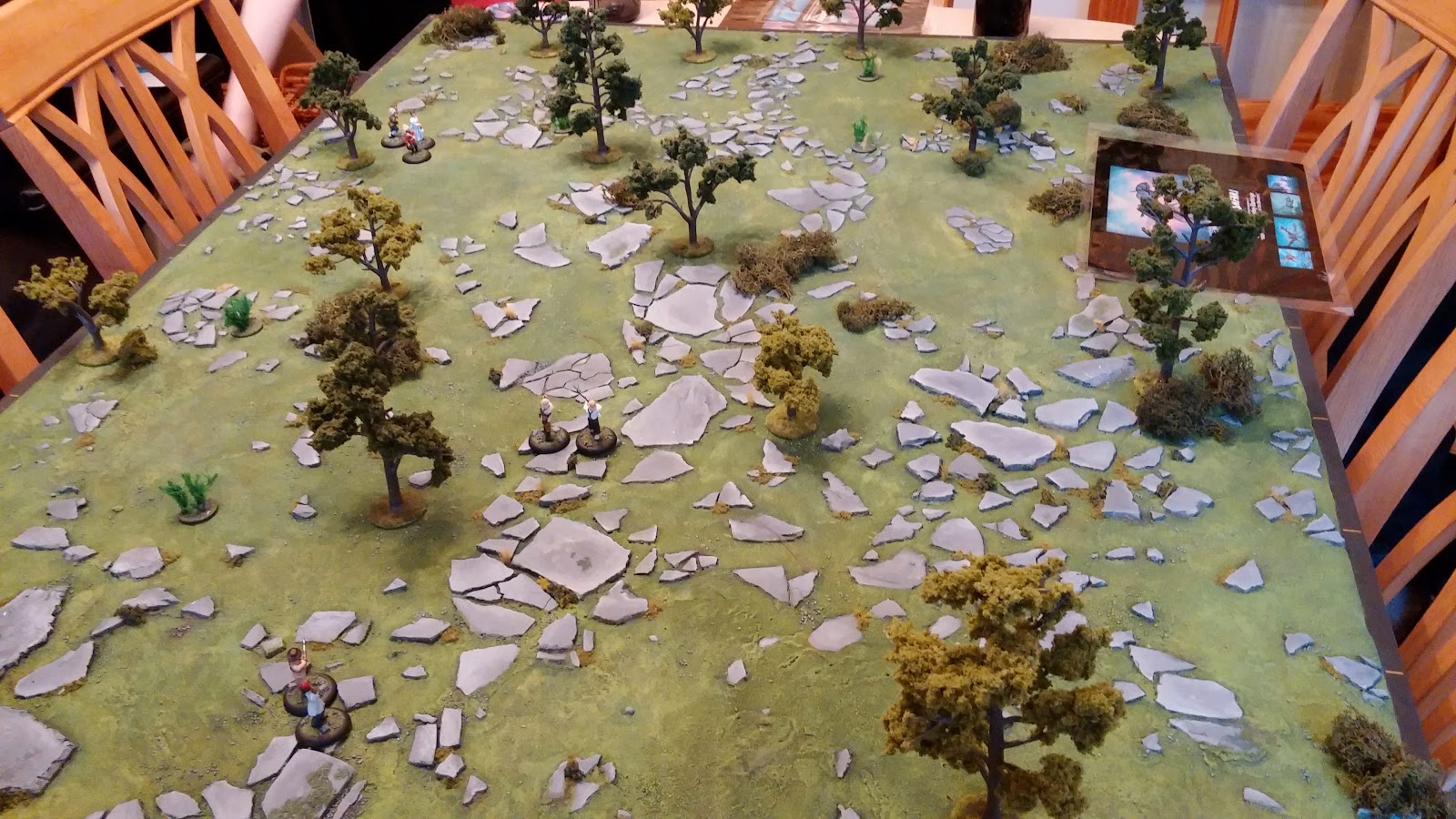 A D6 roll determined there were 6 possible nesting sites for the Archaeopteryx and these were randomly located on the board in the same way that new dinosaurs are.  They seemed quite evenly spaced around the board.  We then diced for random setup points for the three groups.  Lady Constant, the Major and Private Gathering even managed to arrive around the greater concentration of nest sites.  This was seen as a good thing, since Lady Constant is well known to be unable to distinguish the difference between the eggs of an Archaeopteryx and a T-Rex.  Closest to them came Count Otto and Sgt. Reynolds, and rather unsurprisingly Sir Rupert and Goonda were furthest away. Intital disposition can be seen on the picture above. Whilst Lady Constant wandered around aimlessly caught up with the excitement of it all, Pte. Gathering approached a possible nesting site, only to be attacked by an Archaeopteryx which he couldn't manage to hit.  He'd already taken out a Protoceratops with two critical shots to the skull.  Each one rendered it unconscious.  It took a third shot, less well placed to finally finish the creature.  Meanwhile, a group of Compsognathus appeared a short distance ahead of Sgt. Reynolds.  Without hesitation, Count Otto started taking pot shots and the sergeant soon joined him.  Even Sir Rupert couldn't restrain himself.  Soon the jungle was filled with red mist as wickedly powerful solid rounds turned the poor compys into pulp.  Even Goonda joined in, making full use of his Winchester carbine.  Two of the critters managed to reach the sergeant and Luke looked on in worry as he diced for the result.  Thankfully he dispatched the first with a deft swing of his gun, the second was kicked screaming from the triumphant hunters.

At this point a Brontosaurus wandered on to the edge of the table. And a moment later it wandered off again. 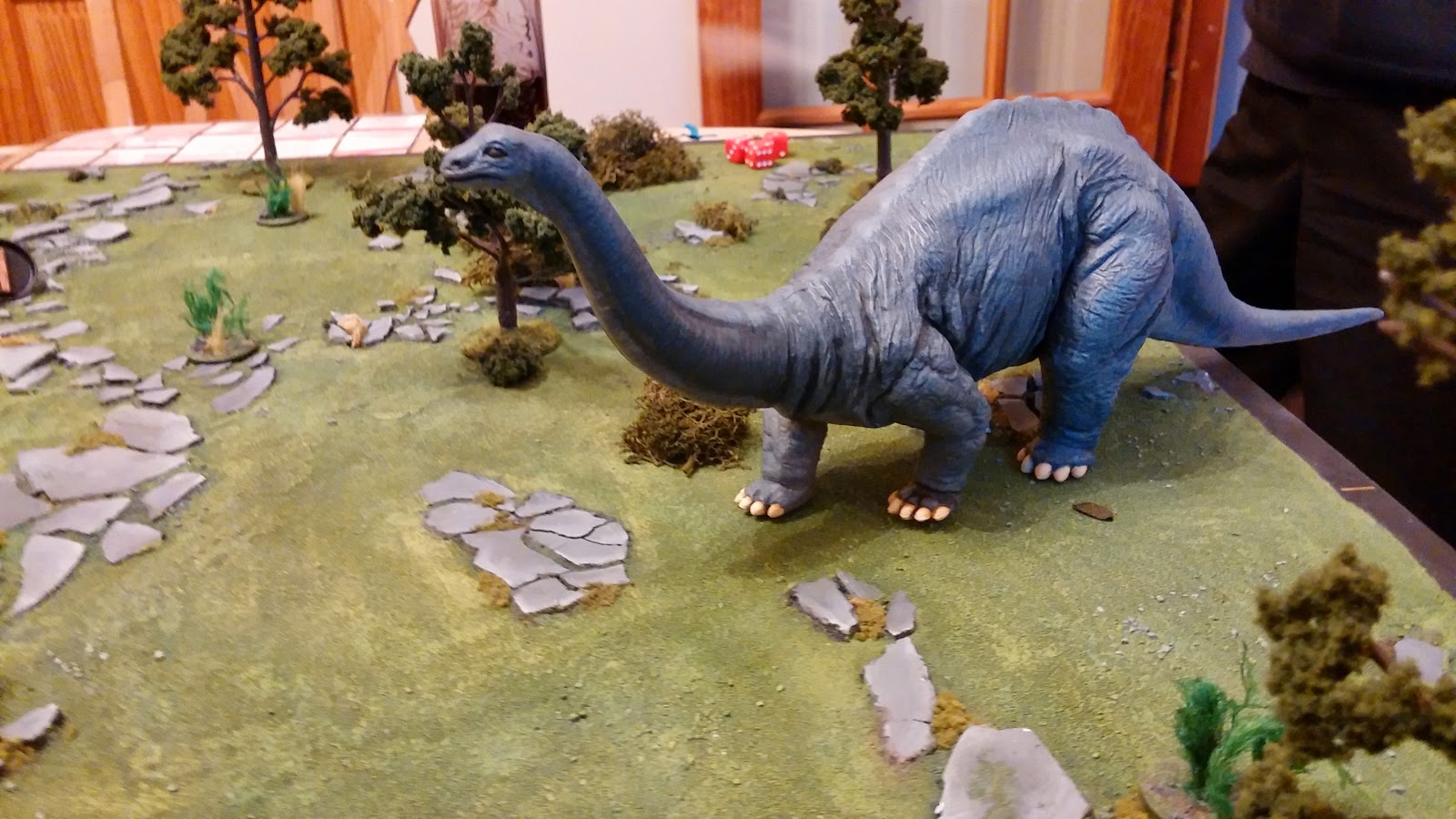 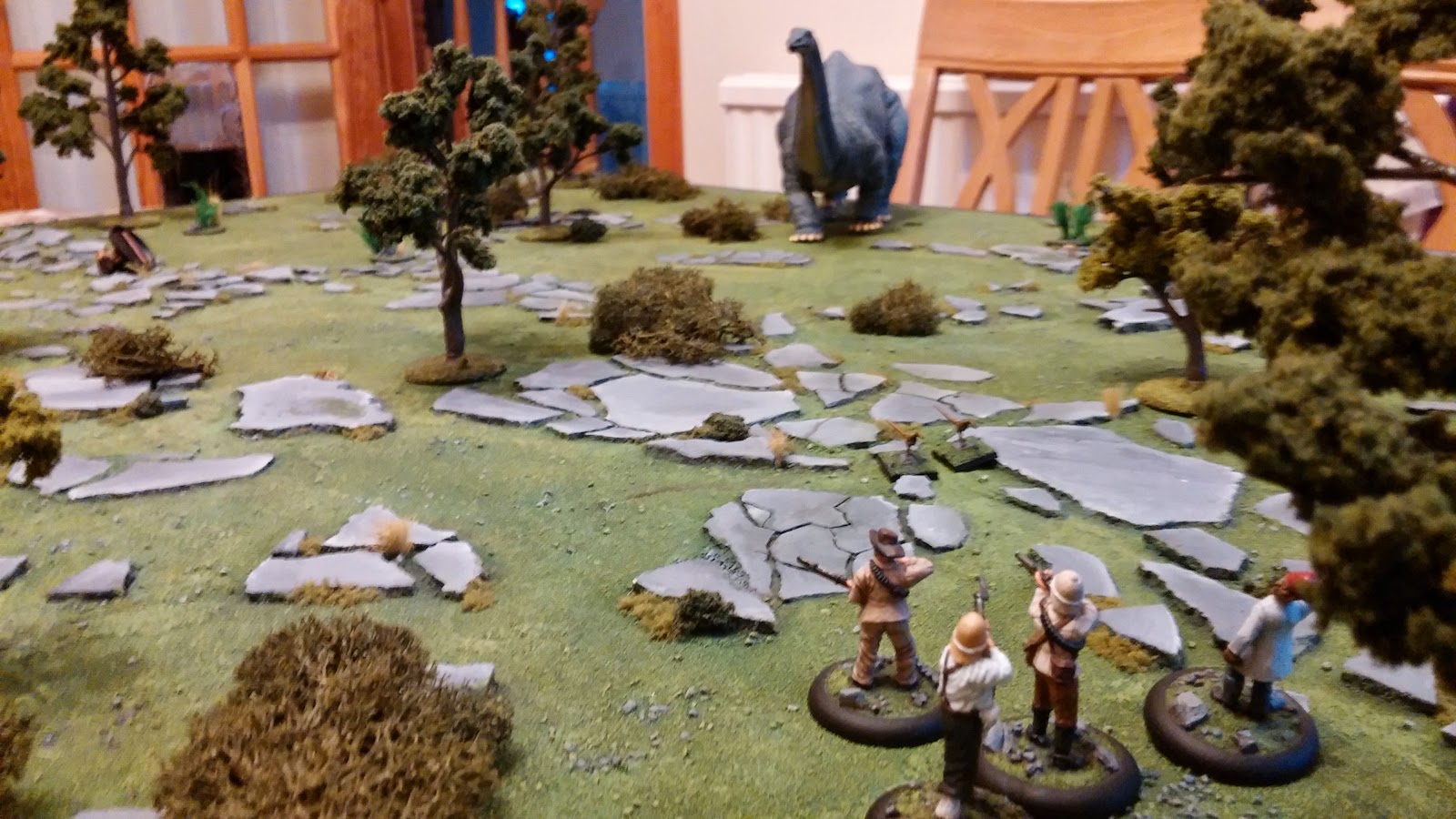 As usual in Saurian Safari, the excitement suddenly went into overdrive when a Deinosuchus appeared in front of Sir Rupert.  Realising his carbine was useless, Goonda waved goodbye once more and walked away.  Sir Rupert began backing off, firing his .577 Express into the beast.  A critical hit to its lungs offering double damage seemed too good to be true... And it was, as the seemingly perfect shot bounced off the beast's scaly hide. 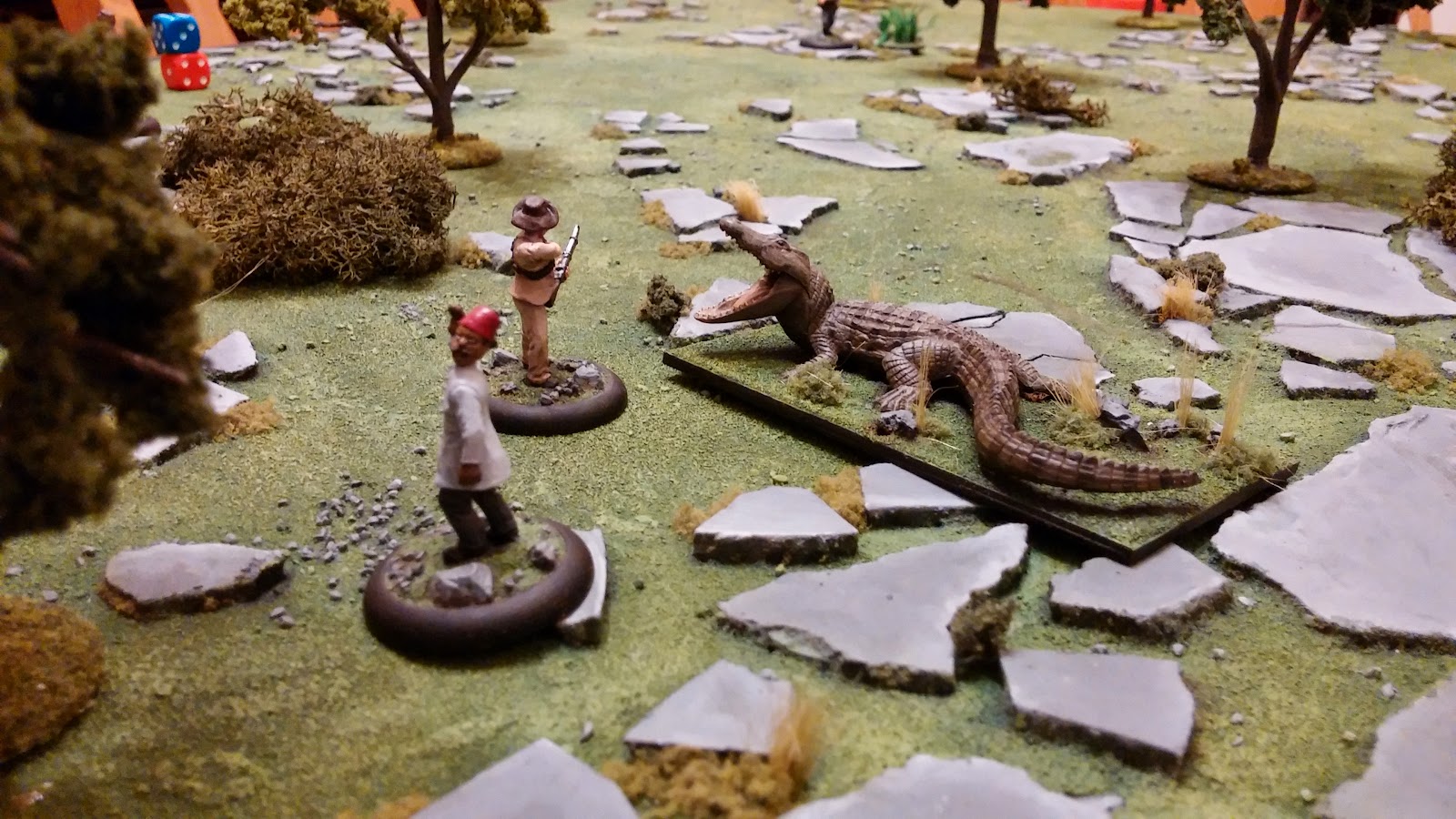 Meanwhile, not all that far away, Count Otto, Major Payne and Sgt. Reynolds  were reloading after taking out the Compys, and having a search for Archaeopteryx.  At the other end of the board Pte. Gathering was doing the same.  And Lady Constant was crawling through the bush looking for eggs.  All three were attacked by Archaeopteryx.  Lady Constant pulled her pistol but got seriously scratched before the beast flew away.  Pte. Gathering shot and missed.  And Major Payne did the same. 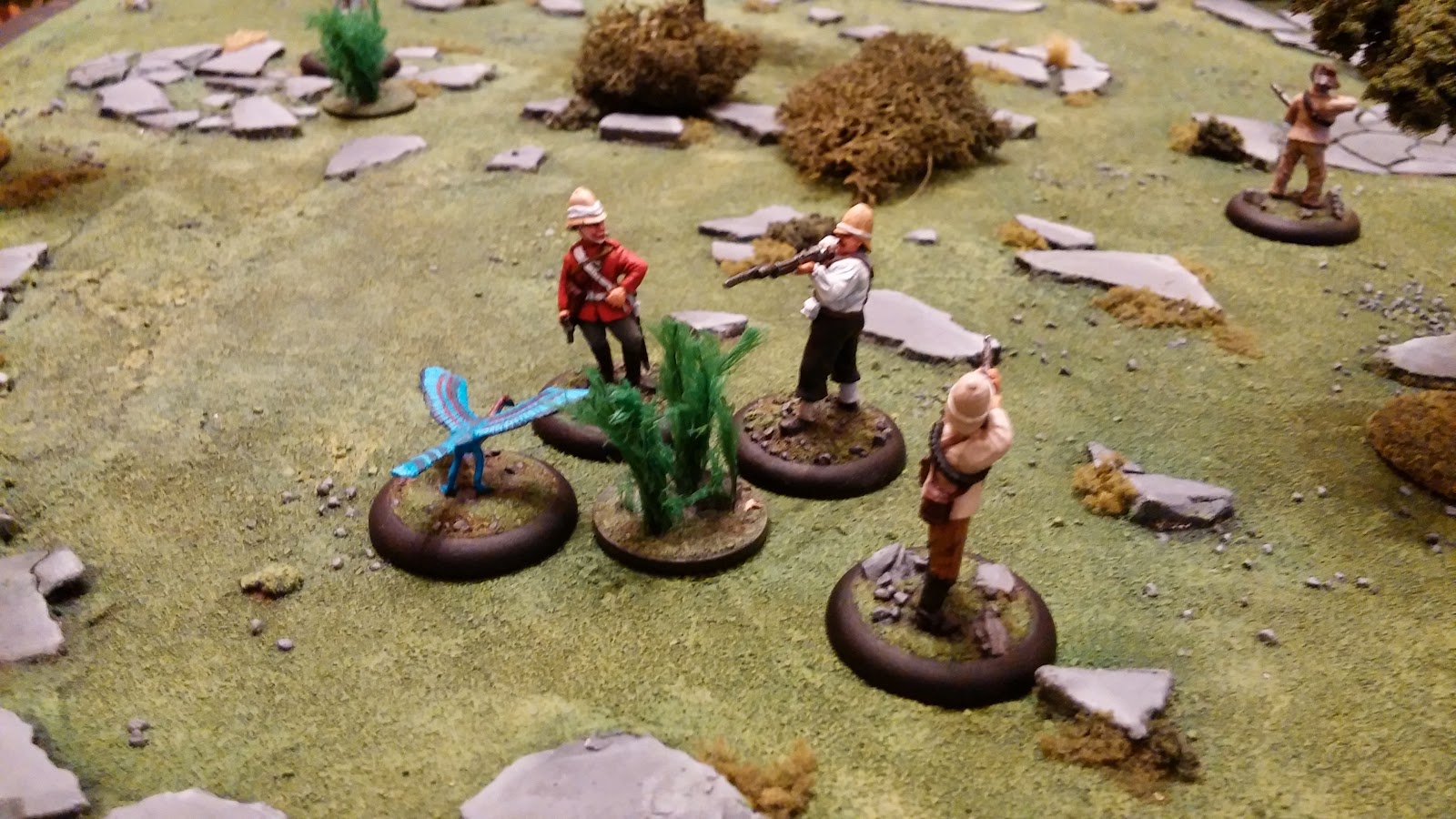 All this left poor Goonda pumping useless shot after useless shot in the general direction of the rather large crocodile that was lumbering towards Sir Rupert. Realising that he had emptied both barrels and had no other option than to run or reload, Sir Rupert hot tailed it away from the beast, cursing his blasted misfortune. Goonda needed no further encouragement and fled in the opposite direction.

At this point Private Gathering turned his attention away from his egg hunt as two Utahraptors darted into his sight. He soon gave up running and took them in his sights.  The first went down with a single shot.  The second was almost upon him when it fell to the ground.  A moment later and he'd have been in the past tense. 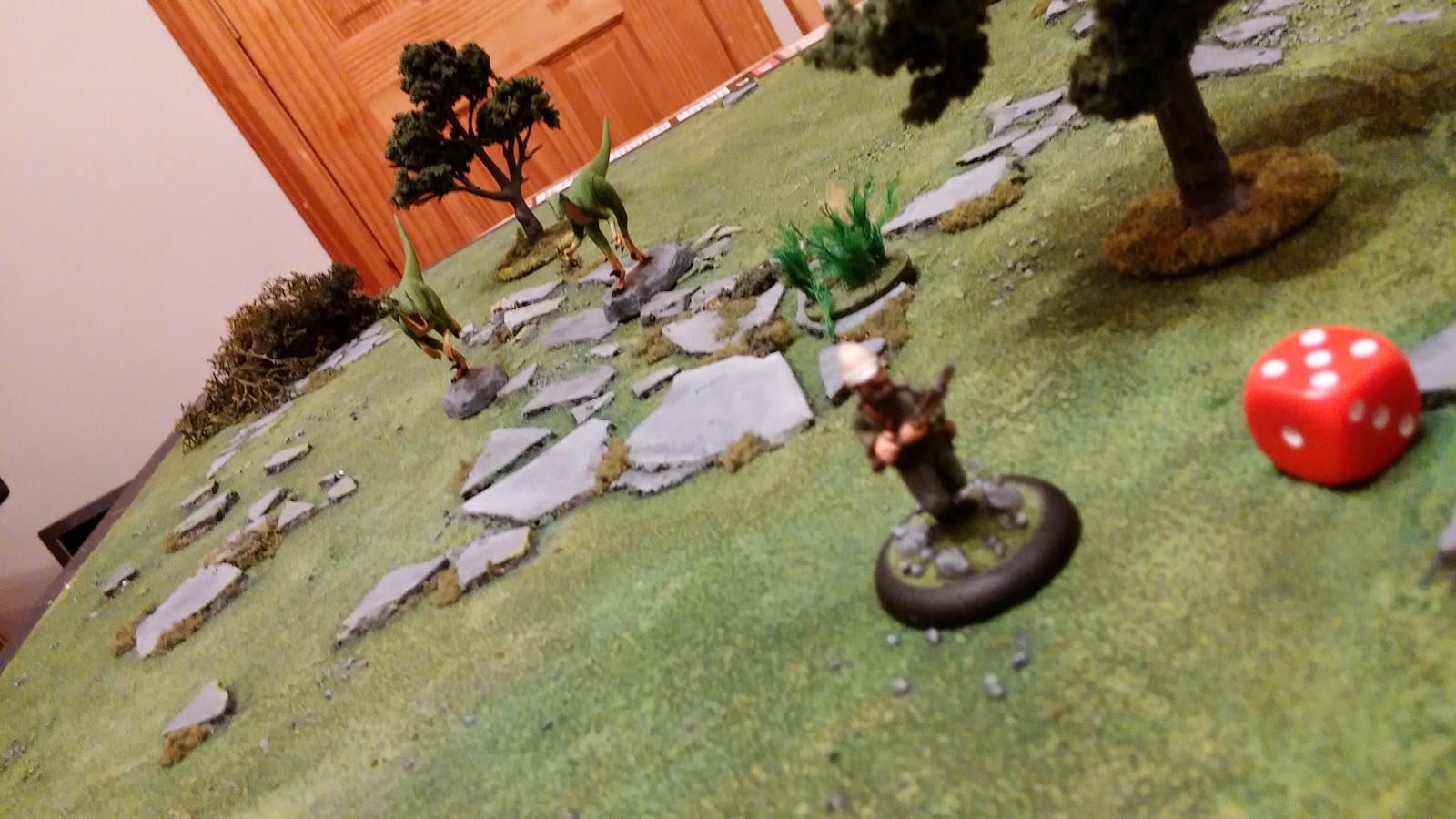 Sir Rupert could only look on with horror as he quickly reloaded his gun, for the Deinosuchus was ignoring him and directing all his attention on Sgt. Reynolds.  Shot after shot bounced off its hide and soon Sgt. Reynolds was caught in its massive jaws.  With a huge reptilian grin that only a giant crocodile can manage with a strapping sergeant squirming between its powerful jaws, it began lumbering to the nearest table edge.  If it managed to reach it, the Sergeant would be lost forever.

Shot after shot was fired at the beast, and it finally went down with a shot from Count Otto only moments before effecting its escape.  As Sgt. Reynolds clawed his way out of the beast's maw, all eyes turned on the opposite end of the board.

Because just when they hoped  the arrival of a Pachysephalosaurus would be okay, it was immediately followed by the arrival of a T-Rex.  At this point the only joy was the knowledge that Major Payne, Pte. Gathering and Lady Constant had managed to find an egg each. And apart from getting scratched to ribbons in the process, the good lady had also managed to kill an Archaeopteryx.  She was now daydreaming of the work her chosen taxidermist could do with her specimens. Mr. Bates always did such excellent work.  Although she didn't think he should be considering going into the hotel business...

With imminent death racing across the table towards them in the form of that T-Rex, it came down to the excellently placed Pte. Gathering.  Steeling himself for the shot of his life, he took aim, held his breath and pulled the trigger... 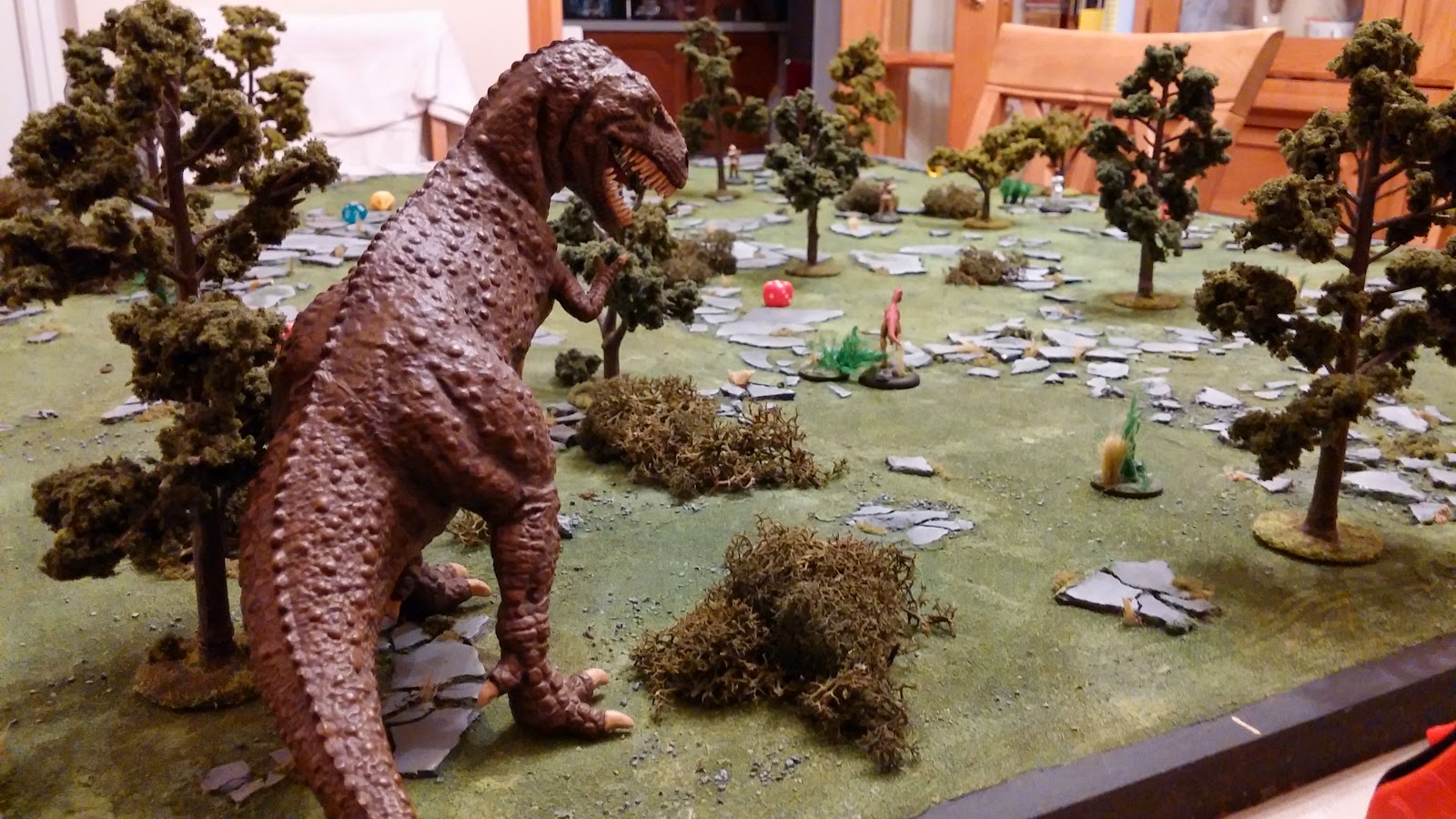 The result was a critical hit to the head that felled the beast!  The private saved the day again!

And unfortunately I don't have a photo of that momentous moment because that's the point my mobile decided to die on me. Timing is everything, or so they say!  I should have taken more photos, but for some strange reason I was having too much fun.  Hope it's not too long before Sir Rupert's entourage wander further into this Lost World again.

And thanks to Andrew, here's that beautiful moment when the T-Rex was felled by the impeccable shooting of Pte. Gathering! 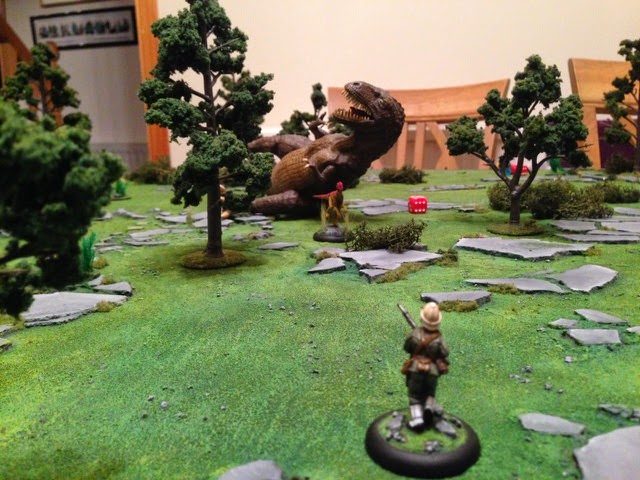