With Steamboat and Rifle in the Mesozoic

And now for something completely different...

Using a week's annual leave to clear out a loft may not rate very highly on your "Must-Do Holiday List", (and to be perfectly honest is completely understandable based on bitter personal experience) but it can have a significant advantage if that's where you store your hobby stuff.  Not only do I now have space to store my things much more safely, I can also get to boxes that had been hidden in the midden for so long I had pretty much forgotten everything I have (feeling blessed!).

One of my greatest discoveries was to come across my models for Saurian Safari, that most wondrous dinosaur hunting rule set from the incomparable Chris Peers. Now, since it's been so long since I last had opportunity to do any hobby, I thought I'd dust this lot off and offer them in this humble post.

So without further ado...

Here we present Sir Rupert Utterly-Barkinge and his faithful servant Goonda.  The German on his left and our right is his travelling companion Count Otto Von Wahnbild.  Rather unsurprisingly, Goonda seems to spend an inordinate amount of time waving farewell to his master.  I can't think why... 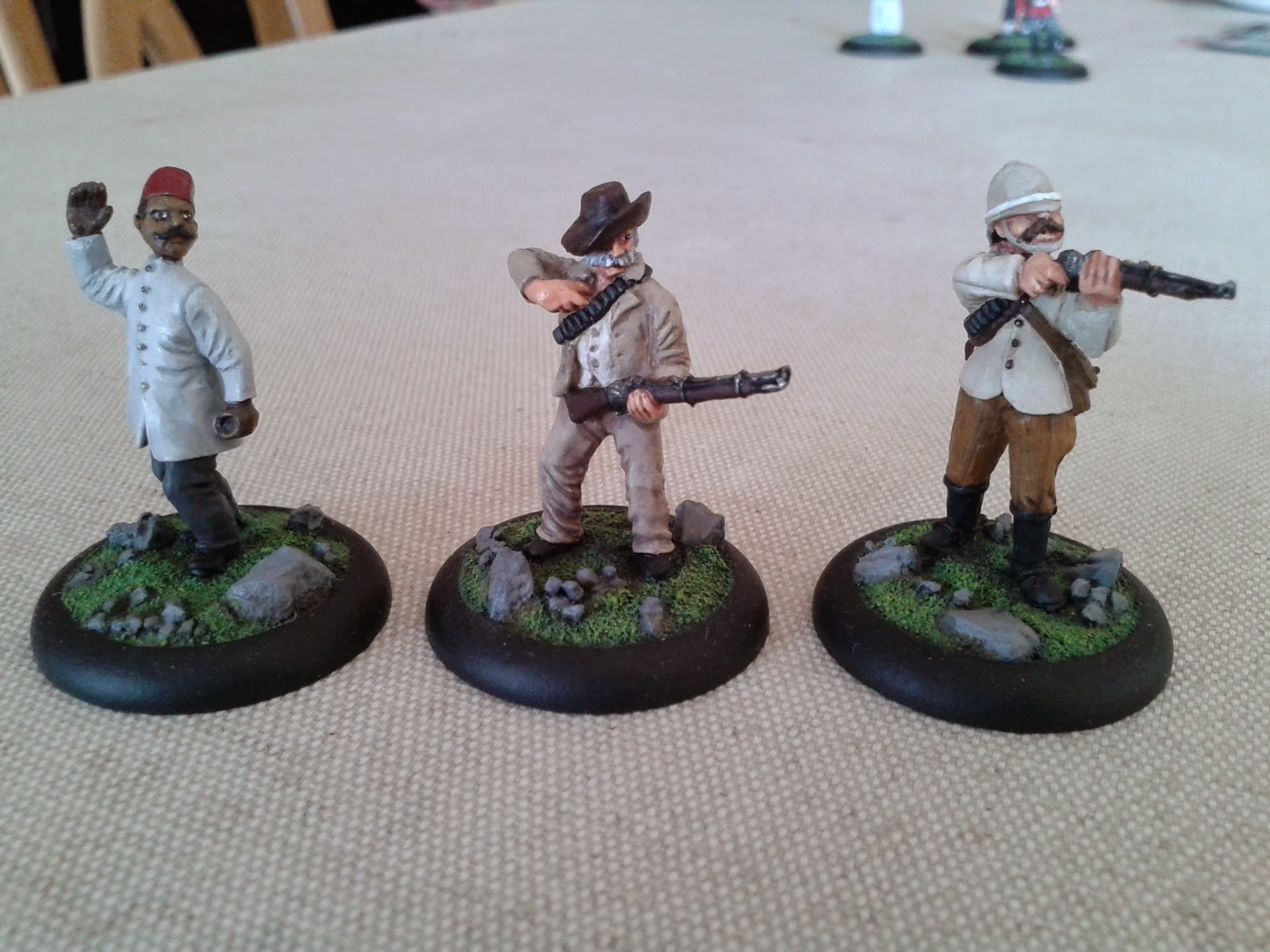 Here we see Major Payne and his lovely, if irritating wife, Lady Constant Anne Oyance-Payne who seems to have an uncanny knack for wandering of in search of Archaeopteryx eggs.  She still hasn't learned the difference between a Compsognathus and T-Rex, wandering around the board with that same gormless delight evidenced on the face of Laura Dern when she first arrives in Jurassic Park.  Pity help her. 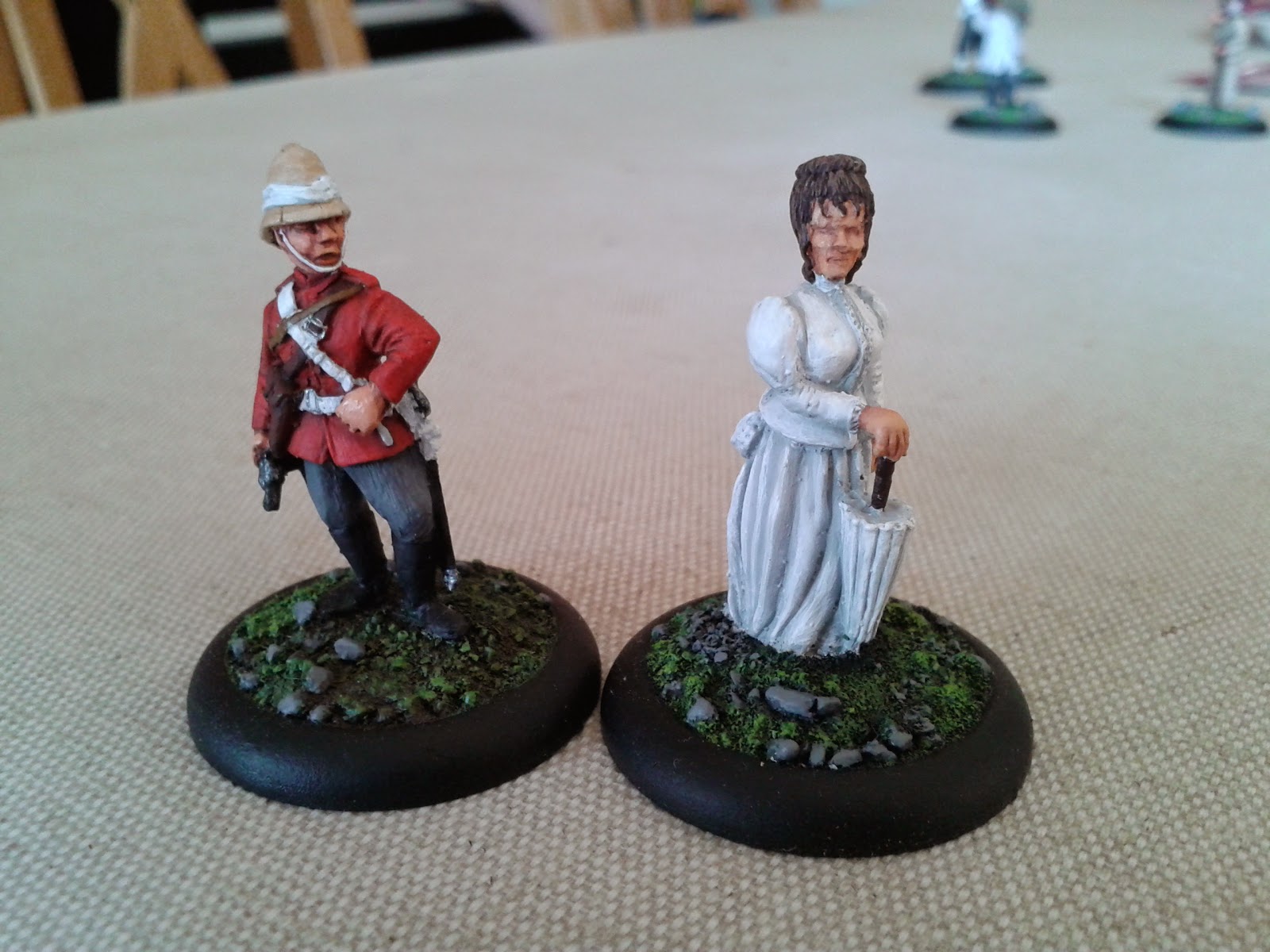 To complete the set, I have pleasure in introducing Sergeant Reynolds and Private Gathering, both trusty travelling companions in Rupert's latest adventures. 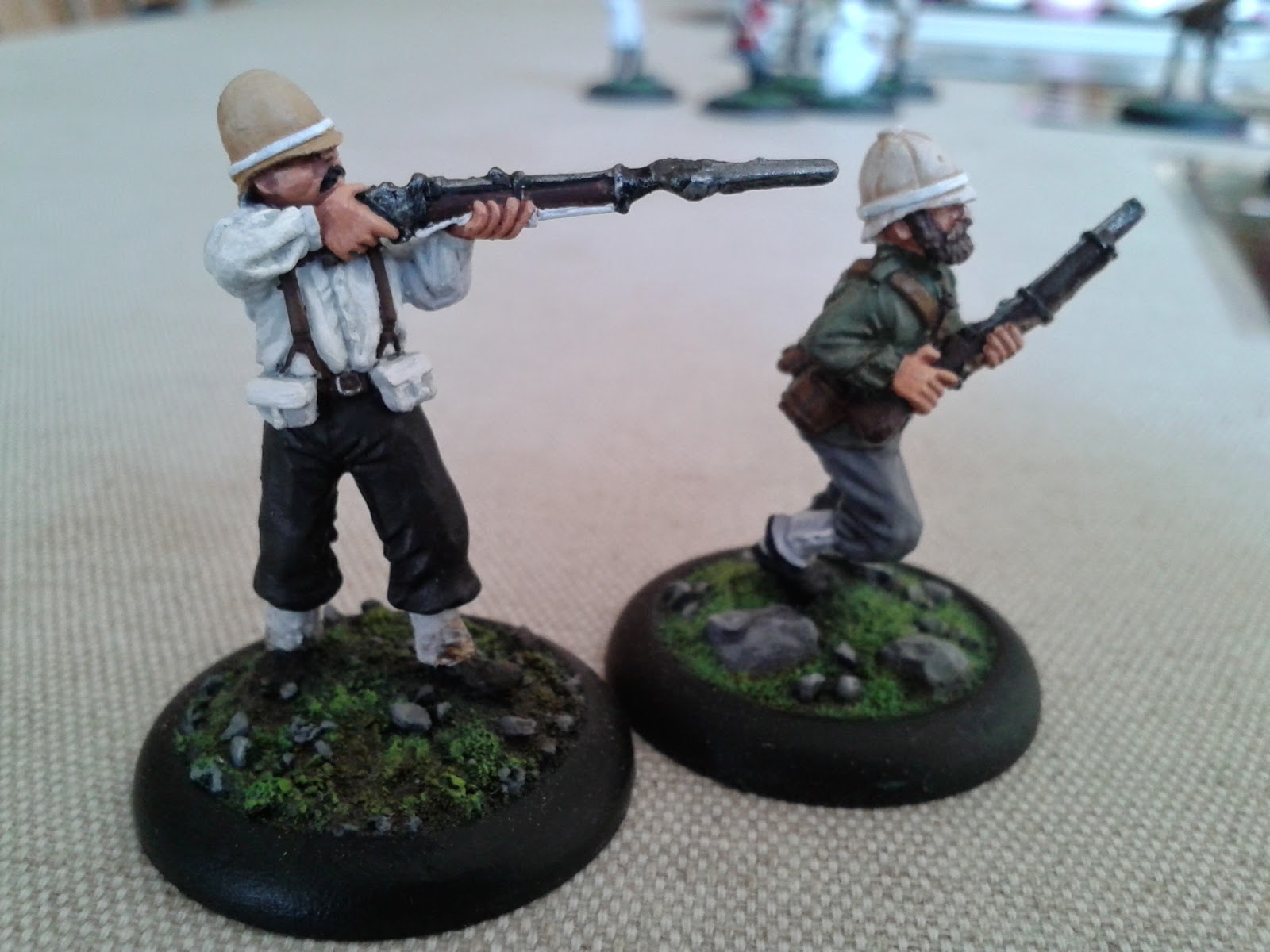 And so on to the dinosaurs.  As you can see in some of the images below, I designed cards for each dinosaur with all the relevant details on them.  Each one was laminated.  Not only did I enjoy designing them, but they save hours of searching the rulebook for the relevant details every time the models are activated.   I also made a separate card with the Lost World Chart on it for handy reference when the time comes to see if anything else turns up. Which they often do.

First up then, the Pachycephalosaurus. Part of a kit from Tamiya. 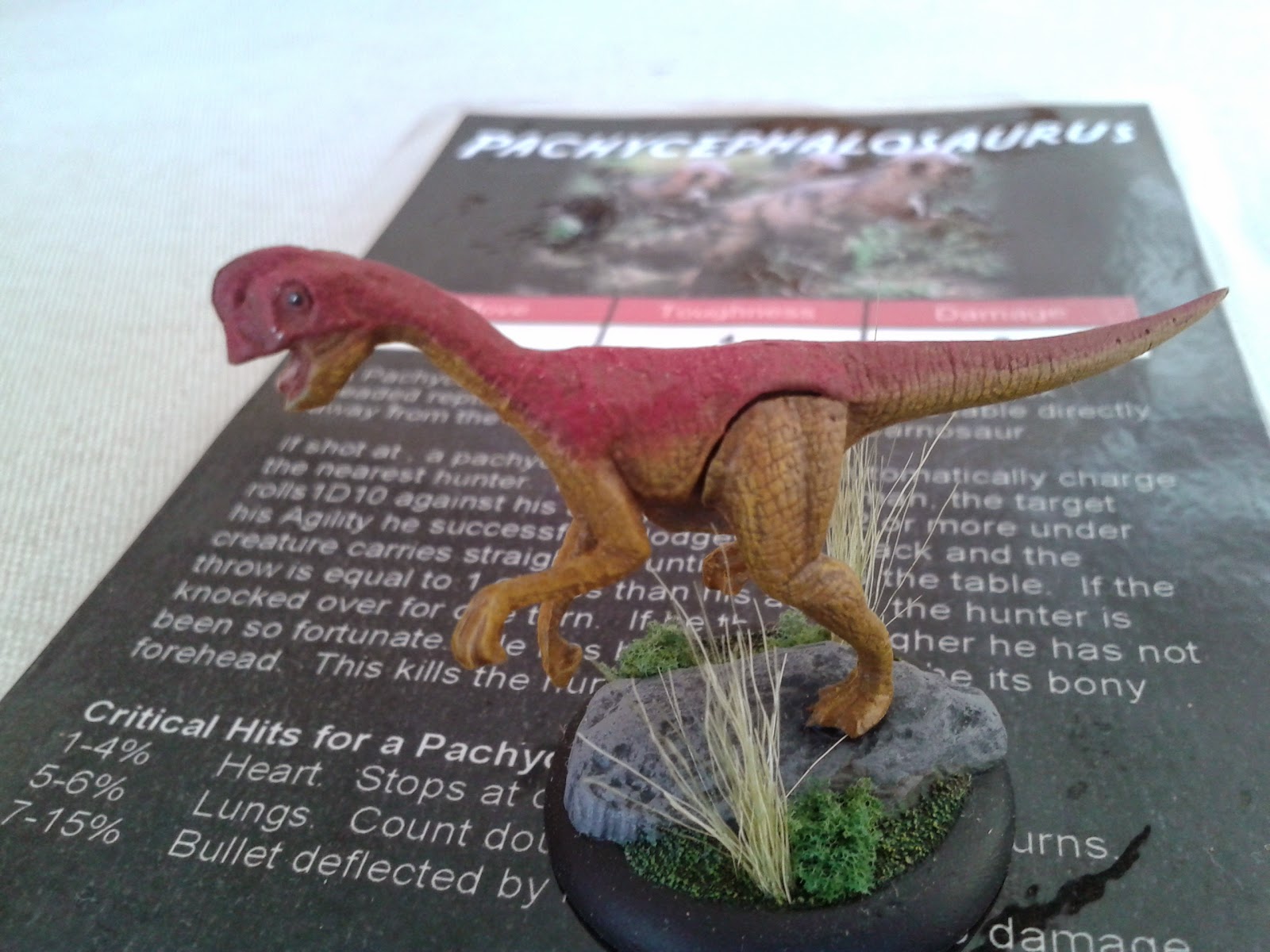 Closely followed by the Dwarf Allosaurus by HLBS.  Great to be able to have two of these rampaging across the table at the same time... 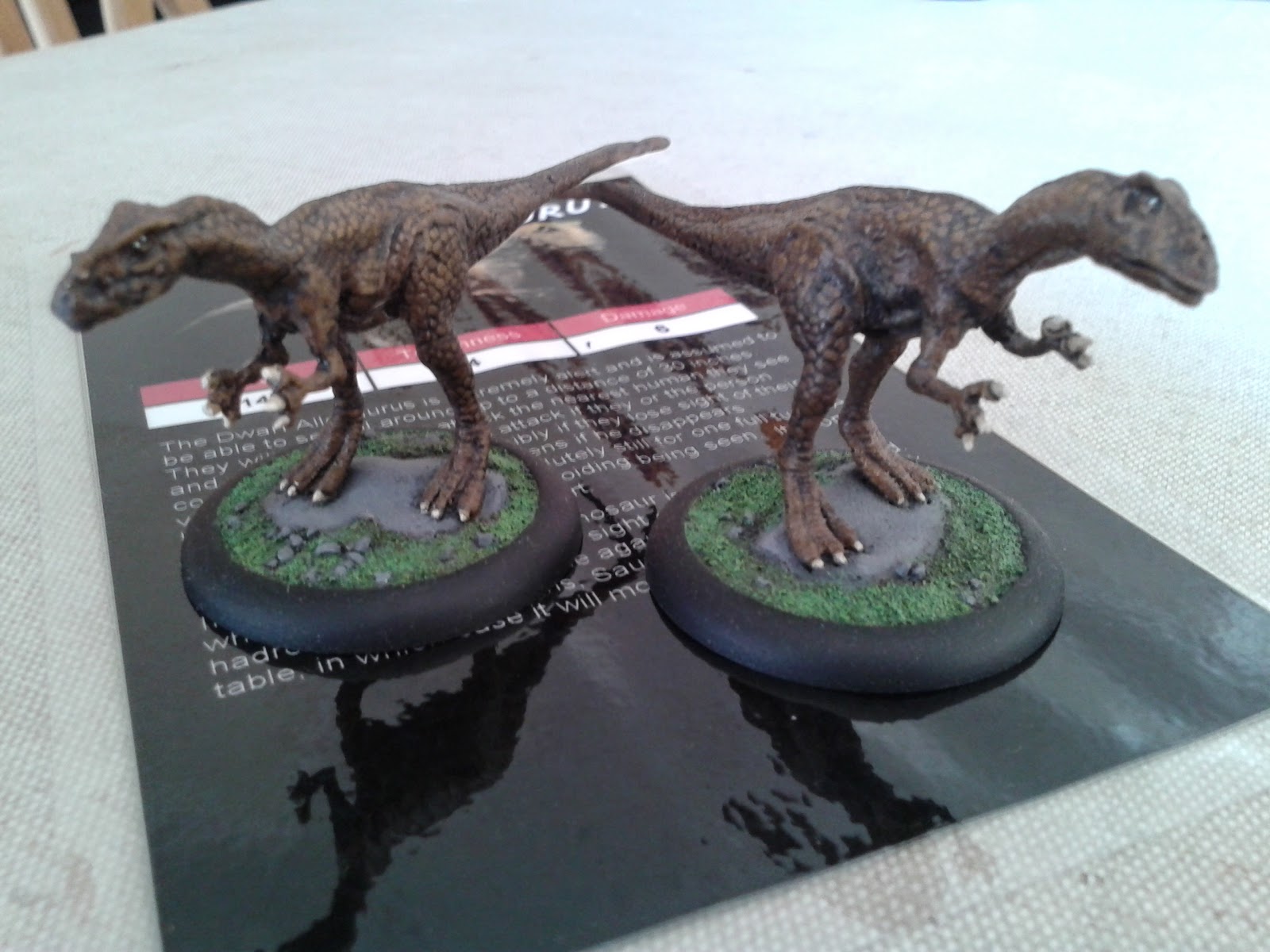 And here's Lady Constant's favourite, the Archaeopteryx, again from Tamiya. 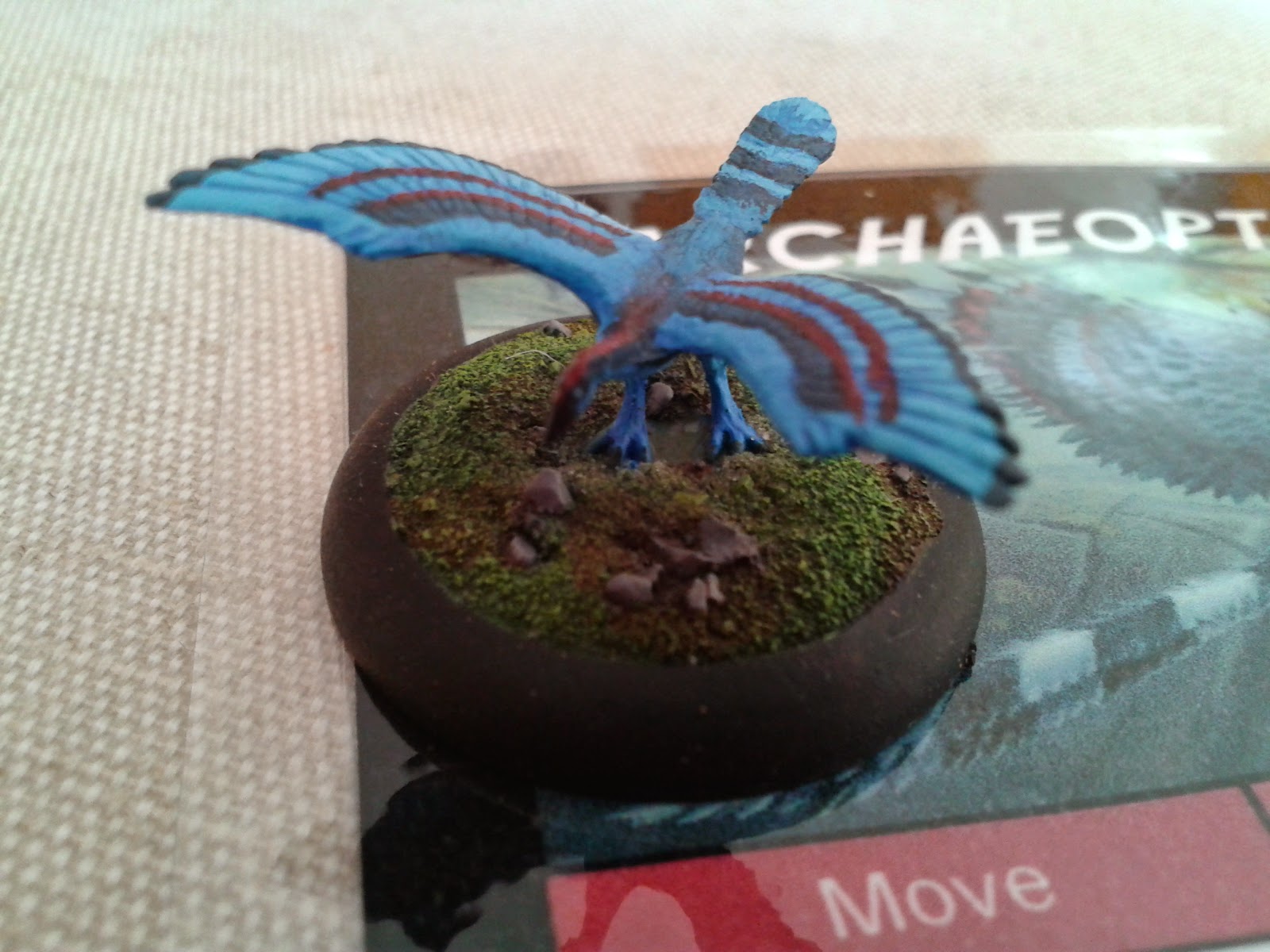 A personal favourite of mine, the Compsognathus.  These are from the wonderful gentlemen at HLBS. Often plagued by them, Count Otto always carries his .455 Martini Henry, or "Compy Cannon" as he calls it.  Never failed him yet.

Here's the Allosaurus.  Looks much smaller than a T-rex, but it's an absolute brute.  Thanks to Tamiya for this one! 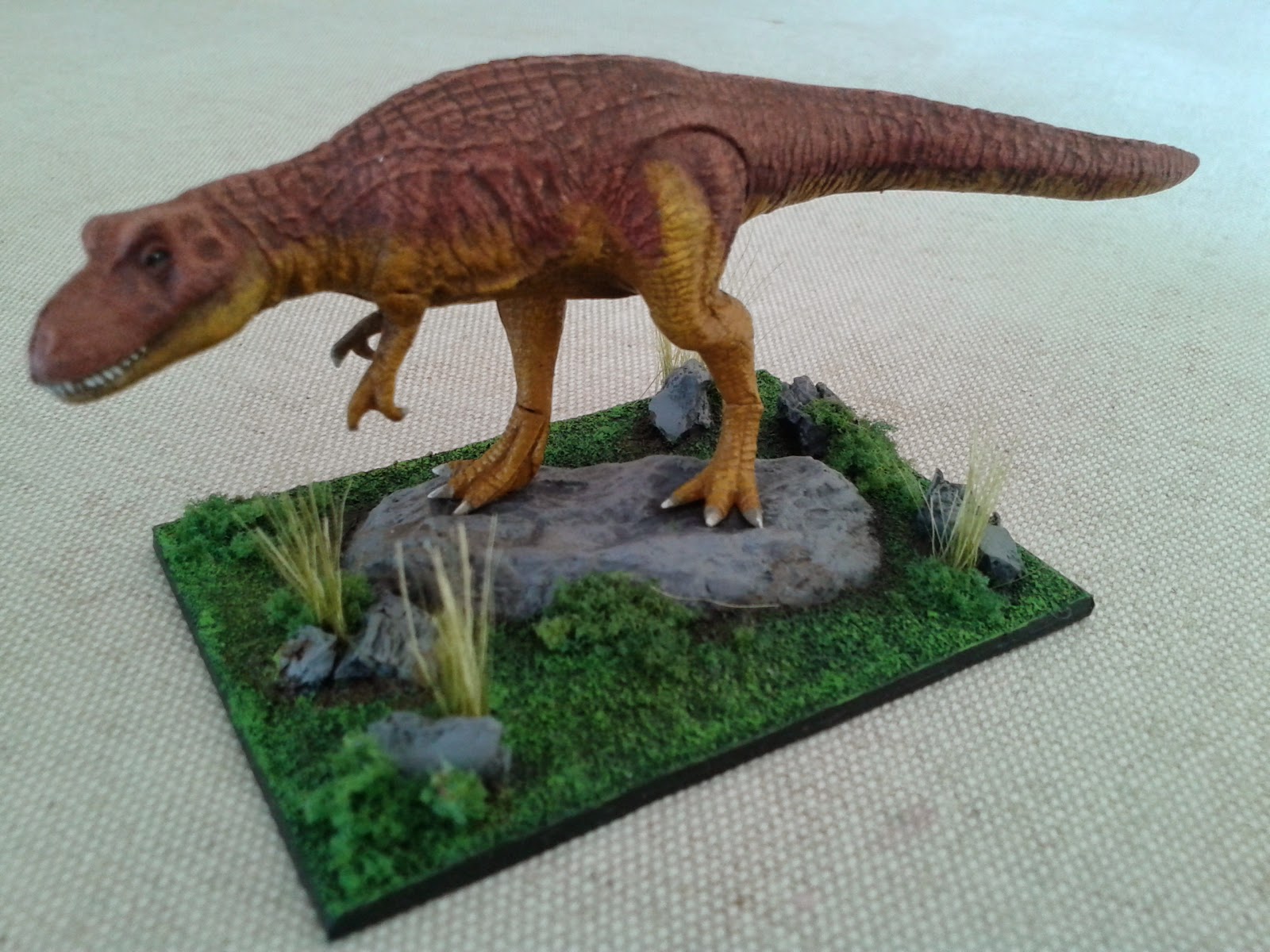 Here's my Velociraptors from HLBS.  Scary and fast.  Fast and scary.  Did I mention they are fast?  And scary? 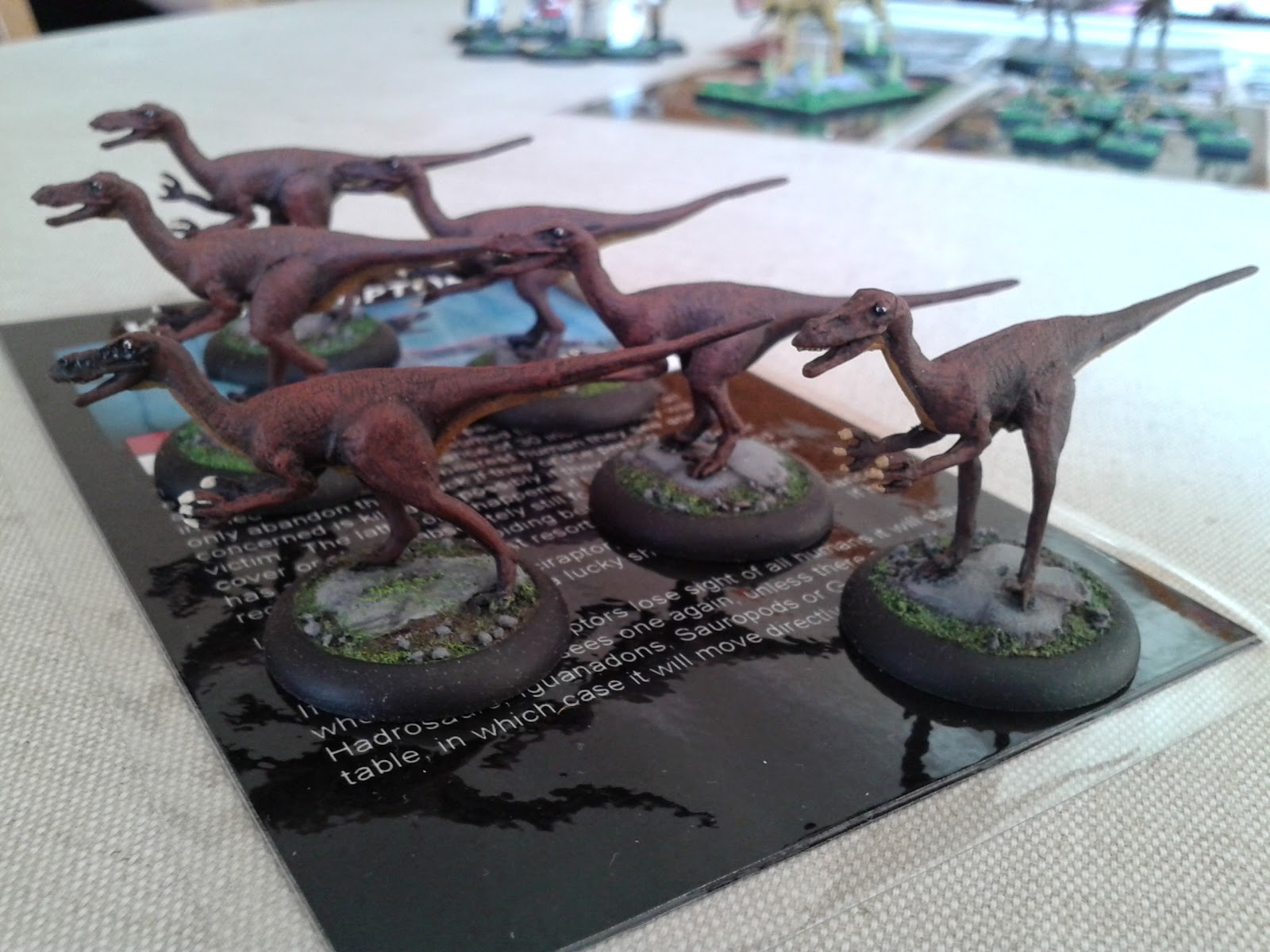 Ahh, my HLBS Gallimimuses!  Prehistoric Ostriches that are alright until a predator gets upwind of them when they stampede.  Usually right into you.  Which is great because they normally manage to knock you over, leaving you staggering back on your feet just as that predator reaches you... 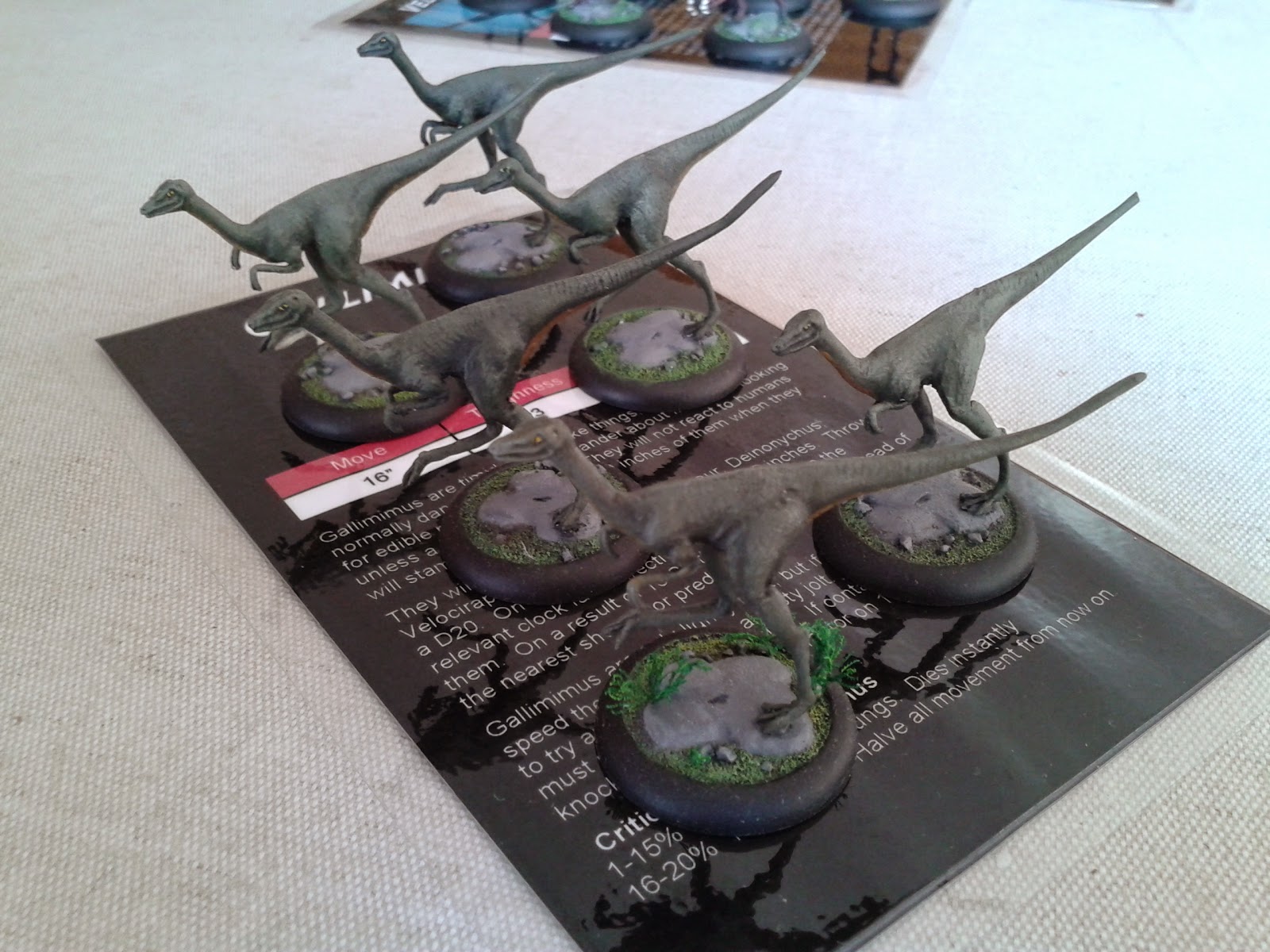 The following dinosaur is named in its own photo.  Which is great, because I'm fed up of all the squiggly red lines that are appearing all over this post as I type.  Also by Tamiya.  I should add here that the Tamiya kits are an absolute delight to make and paint.  Airfix could learn a lot from them. 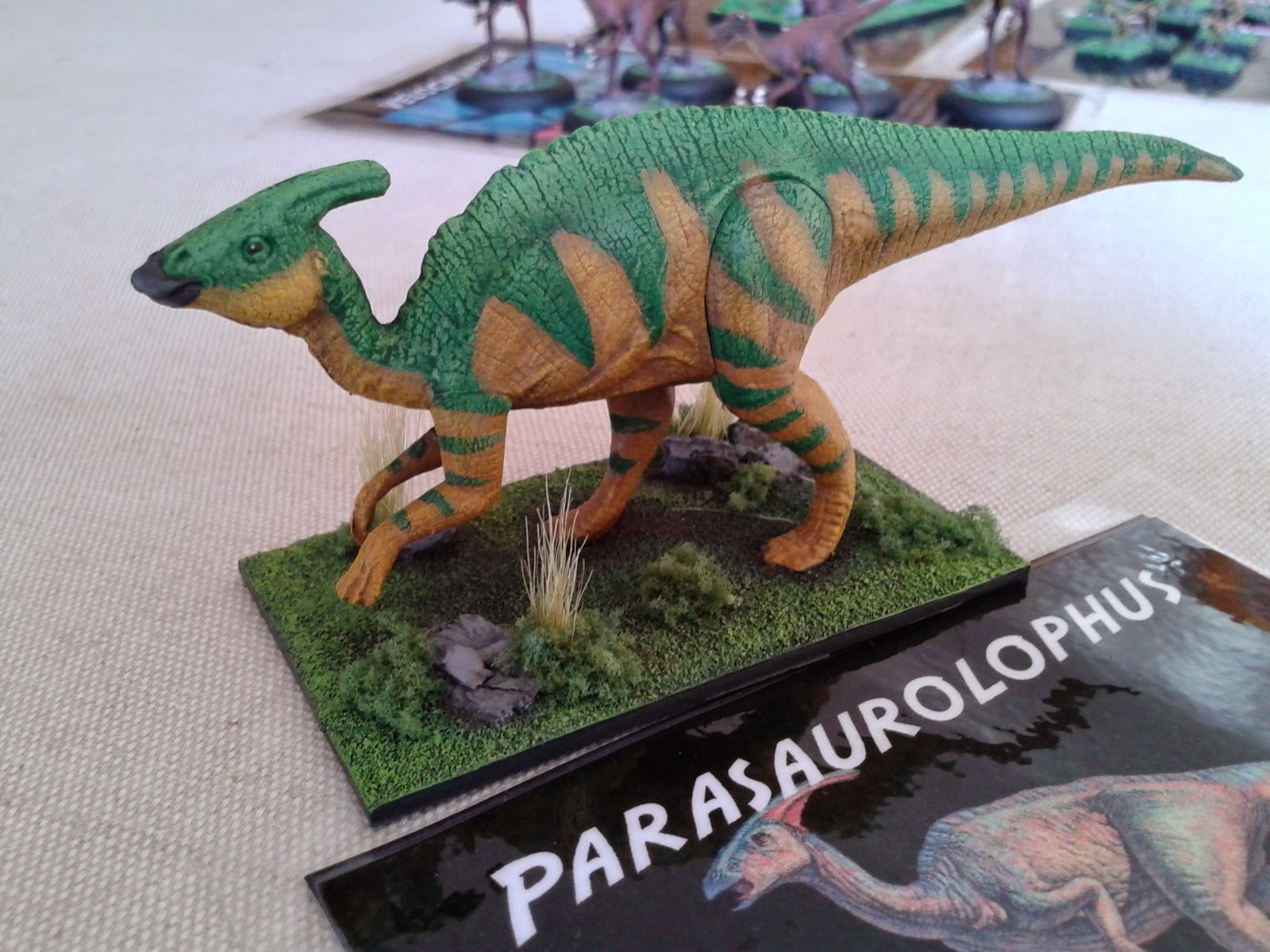 This lot are from a Tamiya kit of Velociraptors.  However, having used HLBS minis (slightly smaller than these) for Velociraptors, I decided to use these as Utahraptors.  They are like Velociraptors.  Only scarier!  I should point out that the set has another three models I haven't made yet.  Perfect excuse for another pack! 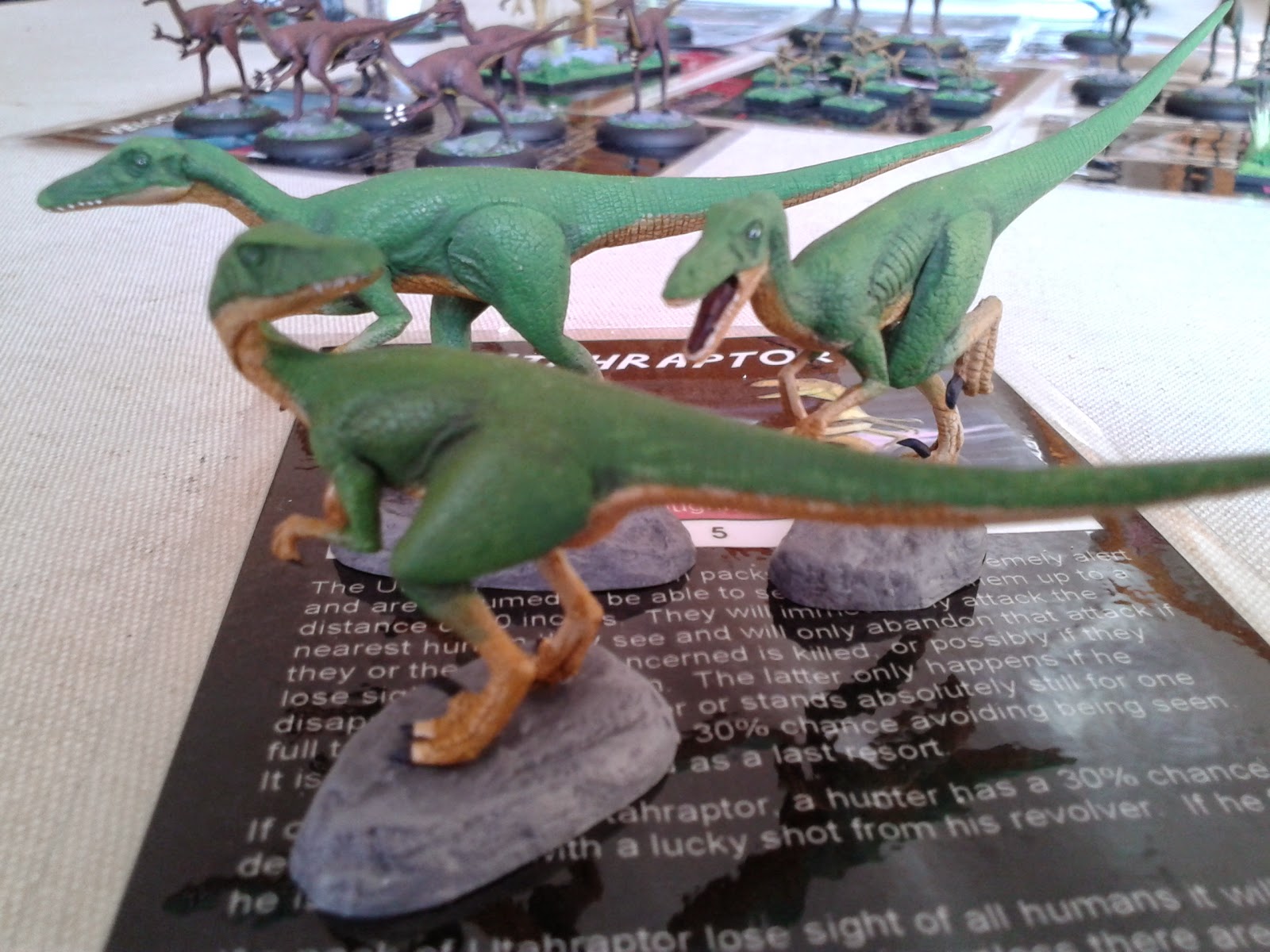 This is perhaps the cutest ickle wee dinosaur you're ever likely to see, courtesy of HLBS. Unfortunately, the Protoceratops has a rather annoying habit of bursting out of its burrow in panic when its alarmed and knocking over anything in its path.   Whilst it causes no permanent harm, it does leave you with only a 50% chance of getting up again each turn. Fair knocks the stuffing out of you, I can tell you! 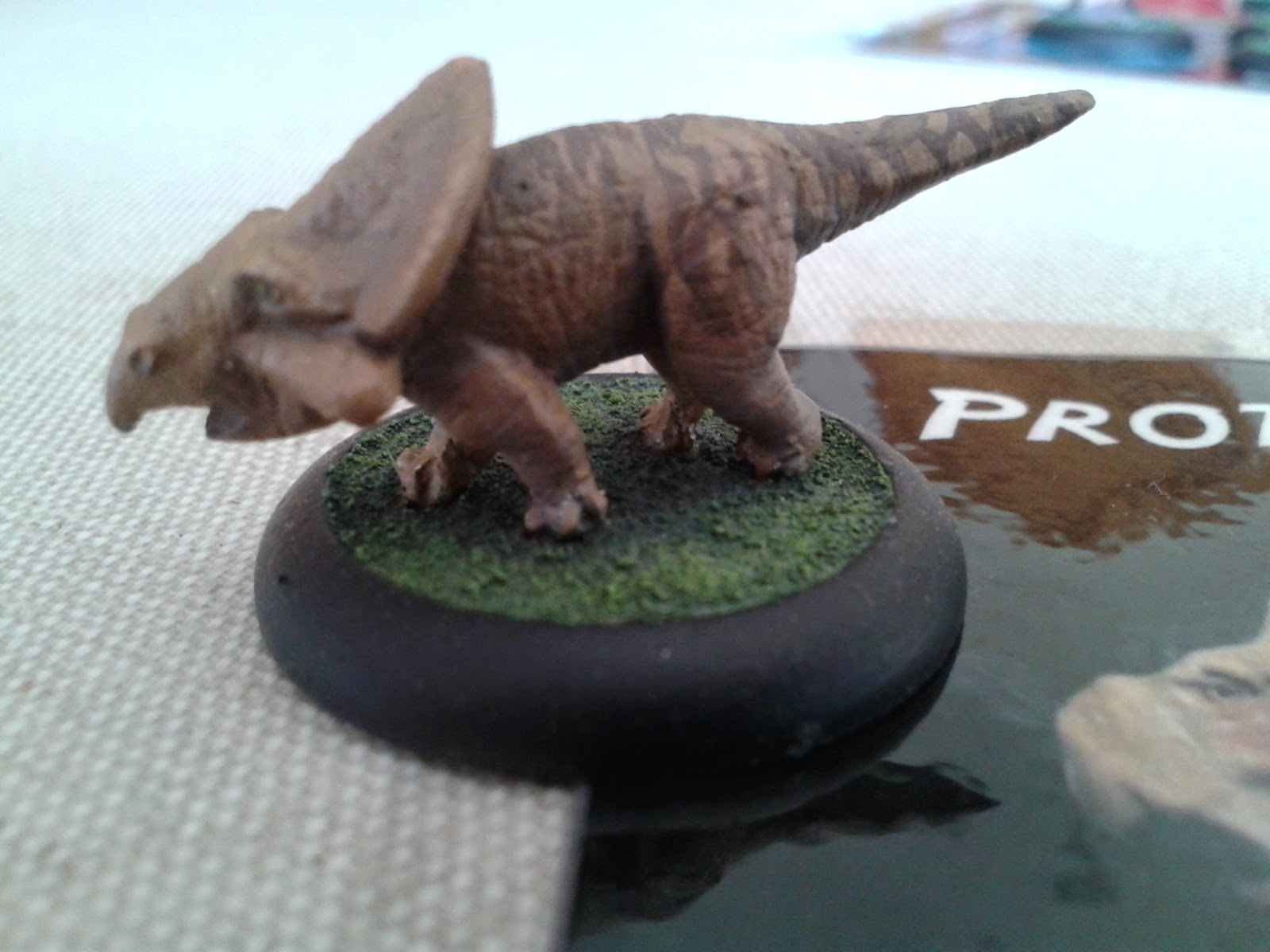 Deinosuchus or "Bloomin Great Croc" as we often call it, is just that.  Has an annoying habit of grabbing the nearest hunter in its jaws and taking it off the nearest table edge to eat it.  There's many a time one of these beasts has gone racing across the table followed by hunters desperate to kill it before it eats its prey.  Another wonderful kit from Tamiya. 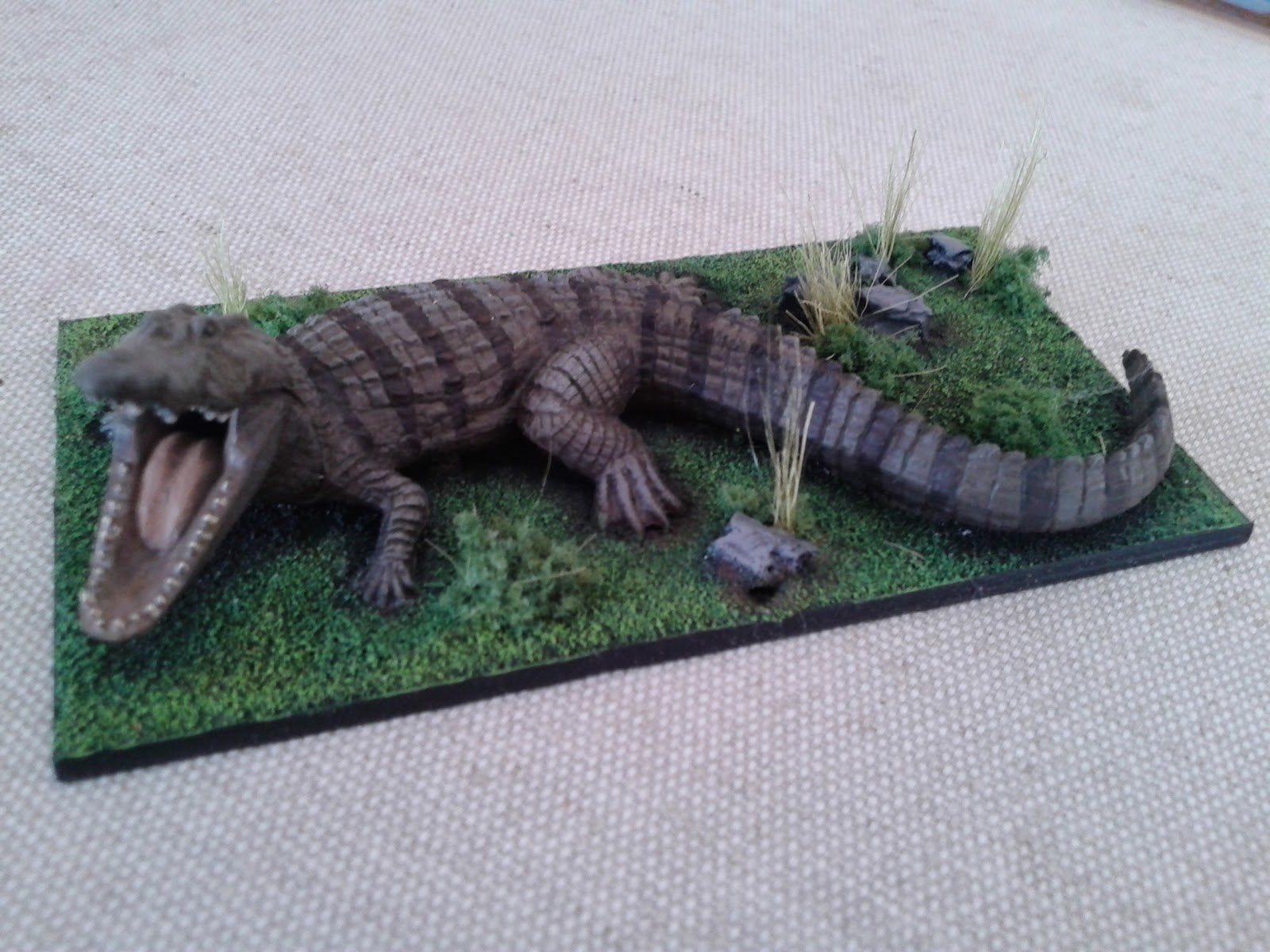 Next up, Triceratops, from an Airfix kit.  They take some shooting to kill them.  And if they can see you when they are shot at, you can guarantee that they'll come charging at you with those great tusts of theirs.  All three of them no less!  So if you want to bag one, you really need to be able to creep up behind it and fire a few times.  Which of course is never as easy as you'd think because you're going to get trampled on by Gallimimuses and pecked at by Compies.  Let alone find yourself upwind of a carnosaur.... 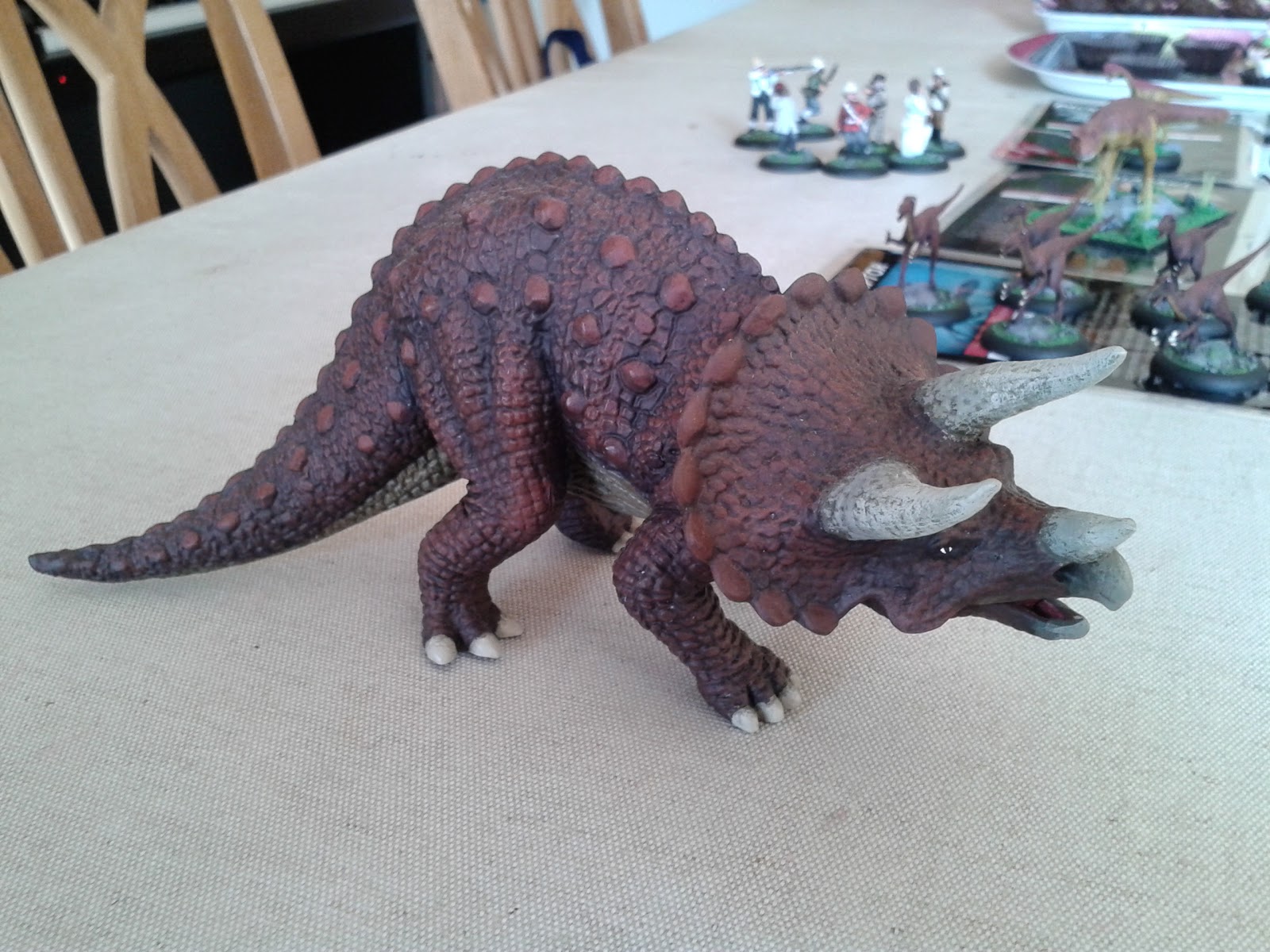 The Stegosaurus, again from Airfix.  With a brain the size of a walnut, you're hardly likely to get a critical hit on it.  Blessed thing only moves if you hit it.  Of course, if it gets you with that heavily spiked tail, you're done for. 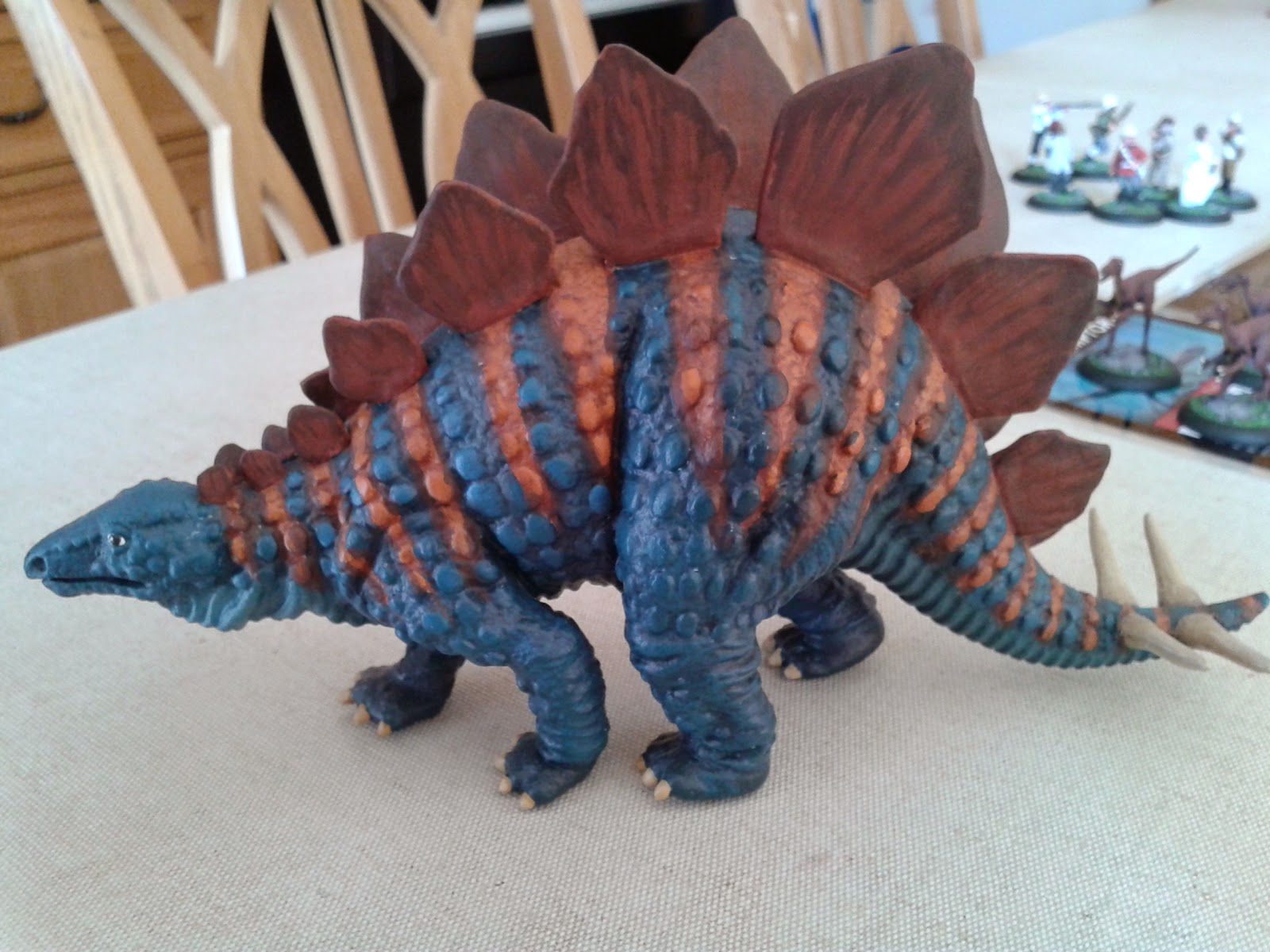 I also managed to find an Apsatosaurus which is still called a Brontosaurus according to the Airfix packaging, and a Dimetrodon, which, technically, isn't a dinosaur at all.  Predates them by 50 million years or so apparently.  They weren't made.  So I made them.  And of course, being Airfix, they didn't need a lot of milliput to fill in the gaps... 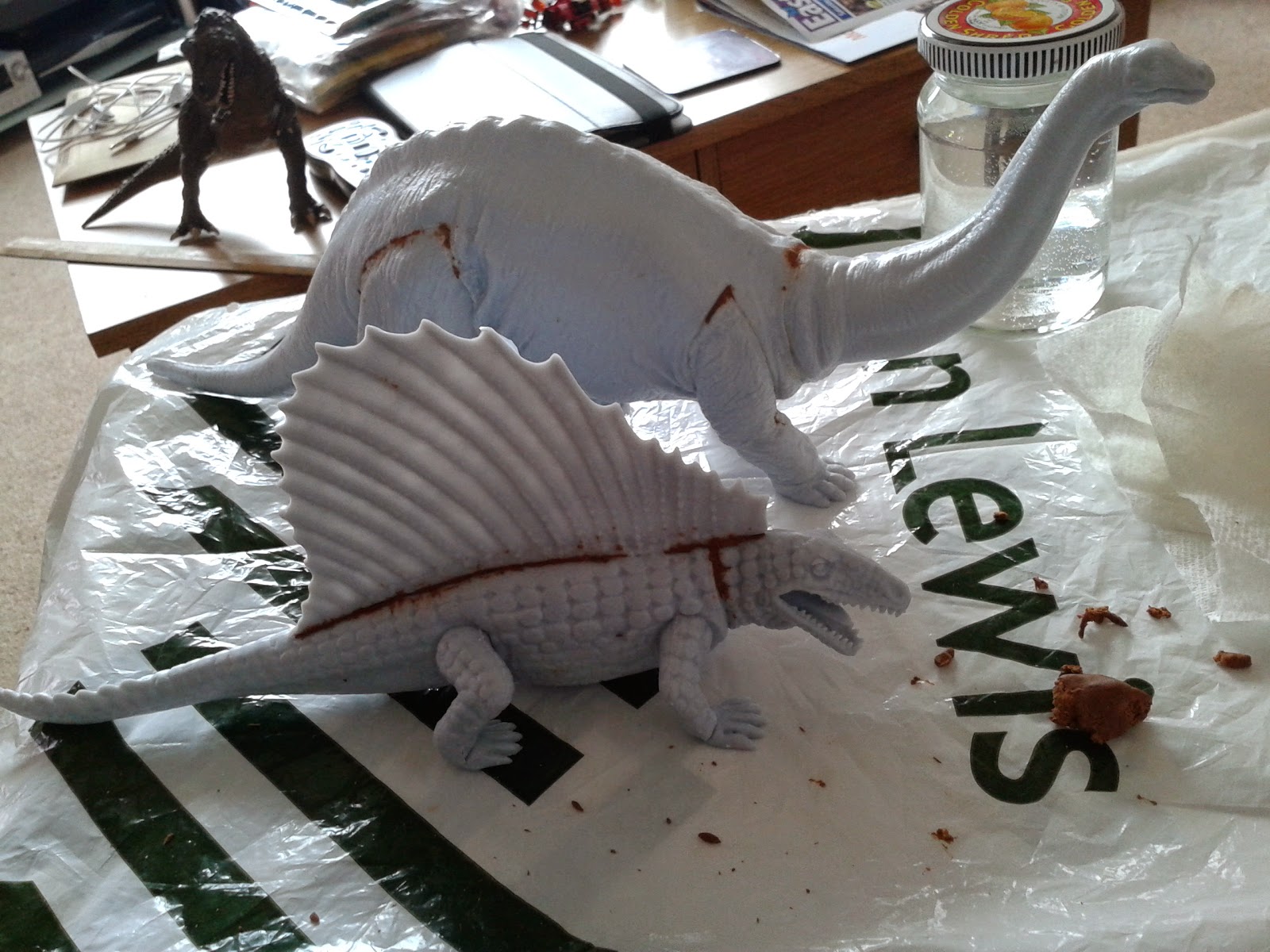 Oh, no.  They needed heaps and heaps as the next picture shows! 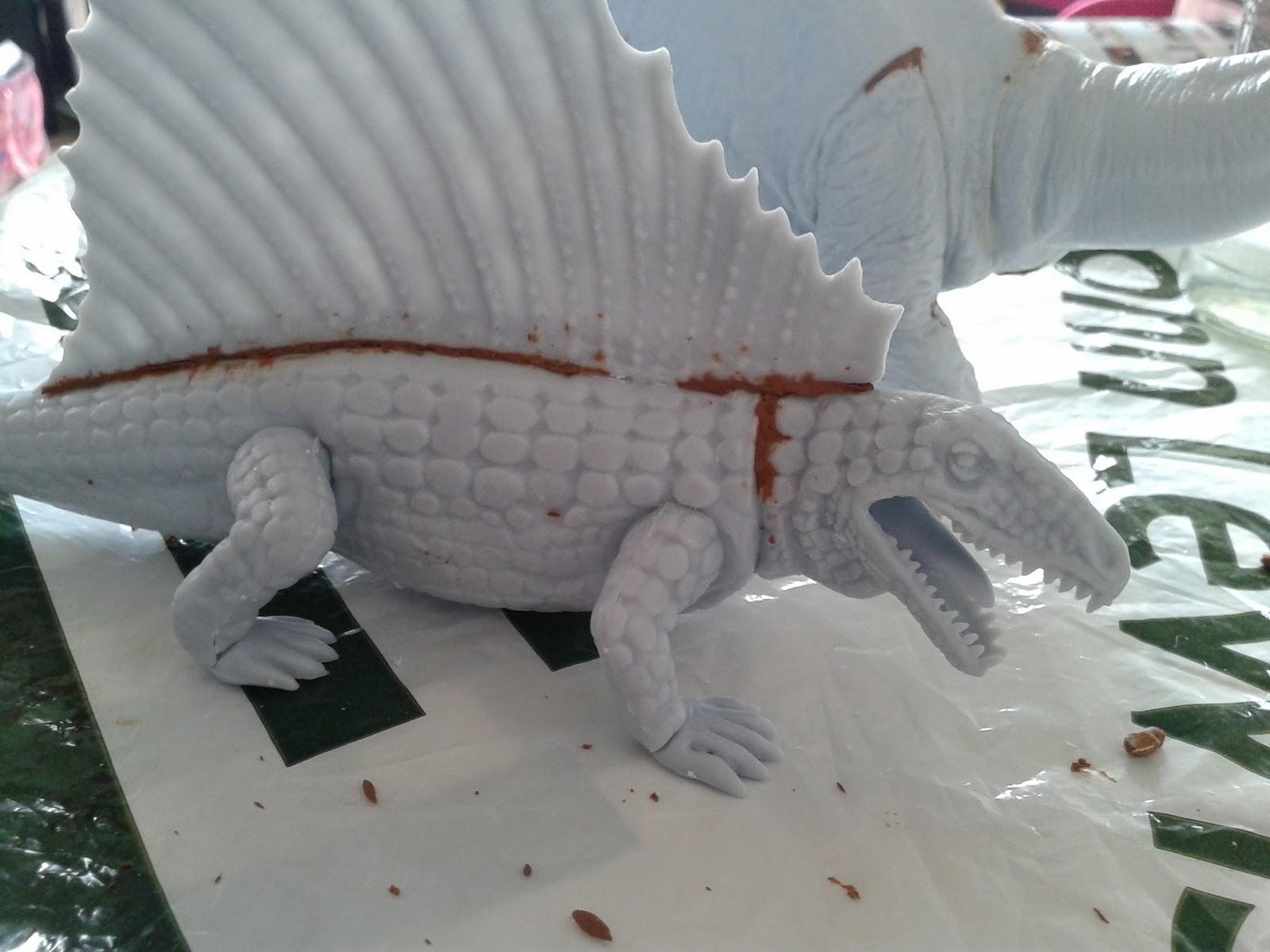 And even though the Dimetrodon isn't form the correct period, I'm going to have to make up some rules for him.  It's not like the game's competing for the the historically accurate award, is it? Oh, and by the way, here's the T-Rex I did some repair work on.  I felt certain he was smiling... 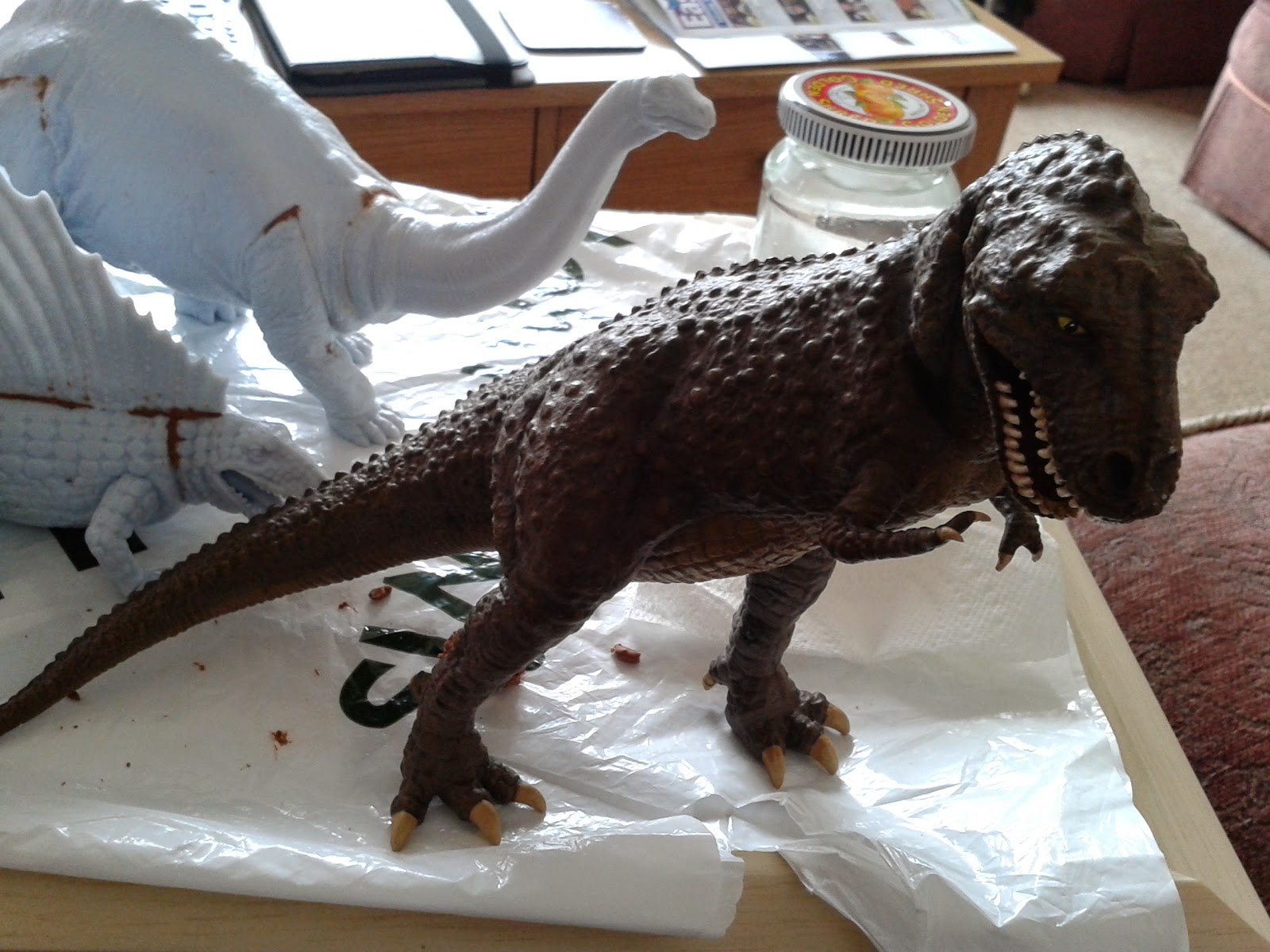 And here's the finished Apatosaurus...! 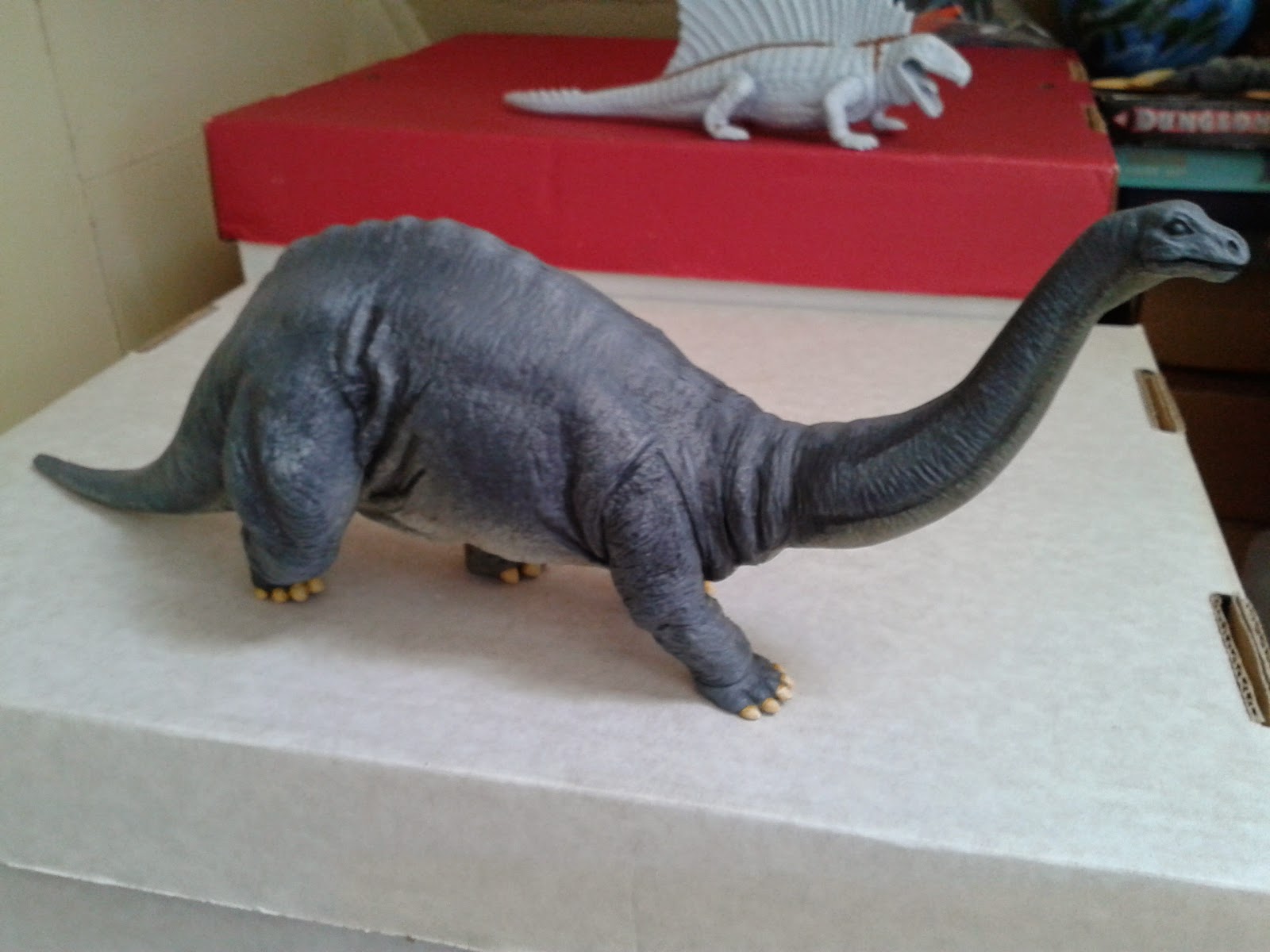 So, did Sir Rupert find a real Lost World?  Was it some breach in the time continuum?  Were his brain cells absent on Absinthe?  Who cares, let's roll a few dice and shoot some dinosaurs!  We've walked with them for too long!!!!!!!!!

Miniatures from Redoubt Enterprises, HLBS and Airfix and Tamiya.

All the dinosaurs will also be used in my forthcoming mini project - Eat Hitler by Pulp Action Library.  The Nazi's had it coming...!